In addition to smartphones, South Korean tech giant Samsung is known for its proprietary QLED TVs. However, as part of the annual CES 2022 show taking place right now, the company finally unveiled QD-OLED – its own attempt to compete with LG’s OLED TVs. It’s important to note that Samsung’s new technology differentiates your standard OLED by using only blue OLEDs.

These diodes emit the light they produce through a series of quantum dots, ultimately allowing the panel to reproduce the full spectrum of colors visible to the human eye. Overall, there is no doubt that this approach has a myriad of different benefits. The most notable thing, especially when compared to modern OLED displays, in the case of QD-OLED is that this panel is much brighter. As part of the FlatspanelsHD demo at CES, a single display delivered over 1000 nits of peak brightness in a 10 percent window. 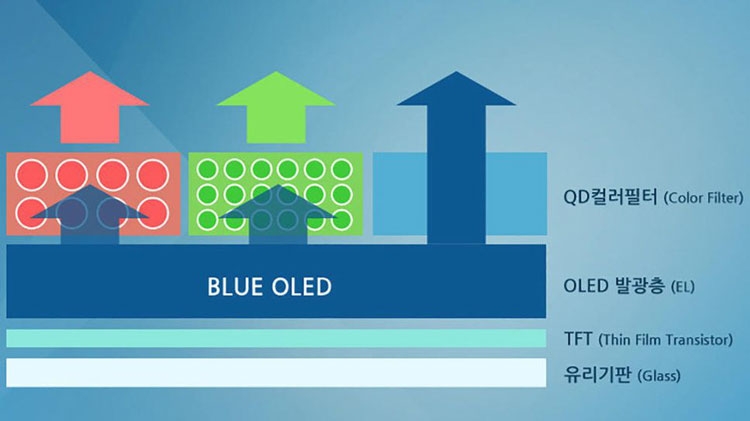 In comparison, some of LG’s latest TVs are capable of delivering 700 to 1000 nits of brightness in the same area. Brightness is something LG has consistently put a lot of emphasis on with its WOLD panels. In December, the aforementioned display giant’s subsidiary unveiled its new OLED EX technology, while claiming it will boost brightness by 30 percent over conventional OLED displays. Anyway, another important advantage of the new technology from Samsung is better color reproduction. Samsung Display panels showcased at CES 2022 cover up to 90 percent of the Rec. And it’s important to mention here that LG WOLED panels, which people consistently praise for their accurate and vibrant colors, meet roughly 70 percent of the Rec.

In the case of QD-OLED, the viewing angles have also been improved, so users can be sure that they will not lose color when viewing QD-OLED TVs, even at “extreme” angles. And by the way, in addition to TVs, this technology will also appear in the company’s gaming monitors. Moreover, it is already known that Samsung and Dell are planning to use QD-OLED in at least 34-inch displays. But be that as it may, at least in words all this really looks extremely impressive, nevertheless, before finally judging QD-OLED, we should look at this technology live.

UNICEF Blue Gift, the best corporate gift for this Christmas

With its Big RED, RED by SFR sells off its package without commitment

NASA: What is the DART mission, with which the US agency intends to deflect an asteroid?