SPC is a Spanish firm that is making a niche for itself in the complicated panorama of consumer electronics. Today, coinciding with Grandparents’ Day, we want to present you one of their mobile phones for the elderly, the SPC ZEUS 4G PRO that we have had the opportunity to test and whose promotion says it all: “the smartphone to take care of those who took care of us”.

The lockdowns to curb the COVID pandemic showed us the need to have digital tools to overcome physical social distancing, whether for work, study, or leisure reasons, and also to maintain at least virtual contact with our loved ones. Especially with our eldersparents and grandparents who were also the most affected by the epidemic and those who needed the most care and attention.

The need for communication tools was evident and, for example, video conferencing applications broke records as one of the most searched for, downloaded and used types of software. Device sales also increased. In the case of our elderly, a good part of them have a fixed or mobile telephone line, but they do not usually go beyond simple voice communication. And it is still difficult for a person of a certain age to use a typical smartphone.

But there is a group of specialized mobile phones that, in addition to providing the “intelligence” of a smartphone and with it the possibilities of accessing the Internet and its services, are (almost) as easy to use as a classic telephone. The SPC model that we have selected to celebrate Grandparents’ Day is a good example of the bring new technologies closer to the elderly, but with a device that they can master.

In a smart phone like this, the level of specifications is not as important as other parameters that have to do with facilitating the experience and use. But as you will see below, its hardware characteristics are not bad at all considering the approach. It is based on a screen 5.5-inch multi-touch IPS with HD+ resolution and 18:9 aspect ratio, suitable for the special interface needed by a person of a certain age who usually has visual and/or handling complications. 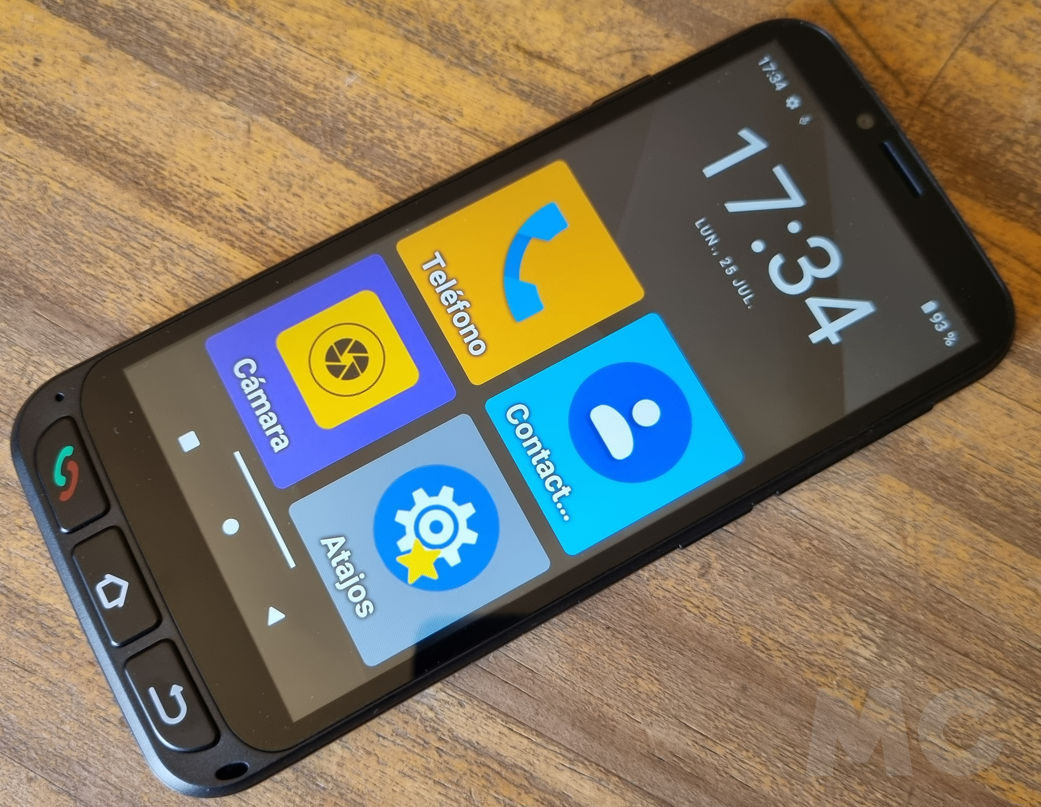 Its engine comes from a MediaTek quad-core ARM, which is accompanied by 3 GB of RAM and 32 Gbytes of expandable internal storage, capable of quite a few tasks. Its connectivity is not bad either, starting with support for 4G broadband networks, Wi-Fi 5, Bluetooth 5 and a USB Type-C port for data and battery charging.

It has a 13 MP rear camera with flash and 1080p video recording, and a 5 MP front camera for selfies and video conferencing, as well as a speaker and an audio jack. Certainly, they are hardware parameters that are not very far from what a “normal” entry-level smartphone offers, but with immense possibilities if we compare it with a “dumb” mobile that only offers voice communications. 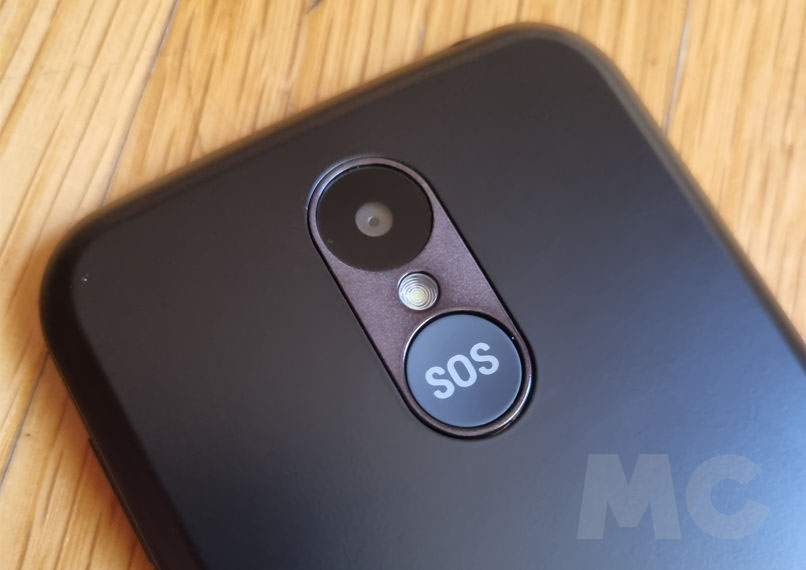 Of course, it has some specific components adapted to the use of our elders, such as an SOS help button, three physical buttons to control the interface or a base that facilitates the charging of the terminal as if it were a landline phone to those who are more used to it . 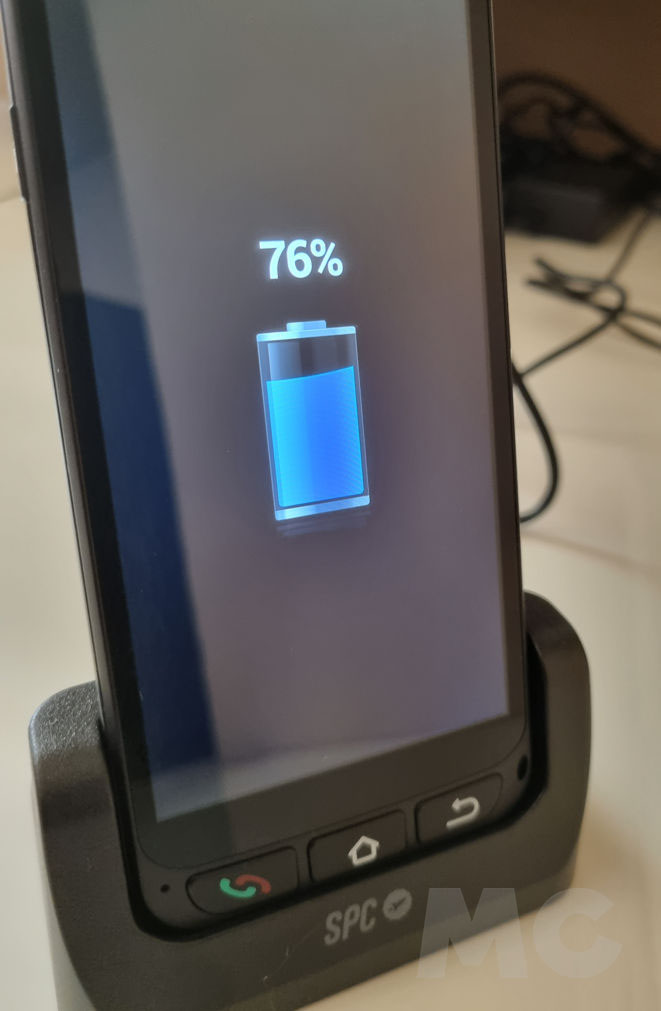 As we said above, this terminal is not bad in terms of hardware and will be a luxury for a person who will surely debut in the world of smartphones. We leave you with a summary of its main specifications:

It must be said that SPC delivers the terminal with everything necessary for its use, the smartphone itself, battery, charger, USB cable, charging base, wired headphones, protective case and user manual. 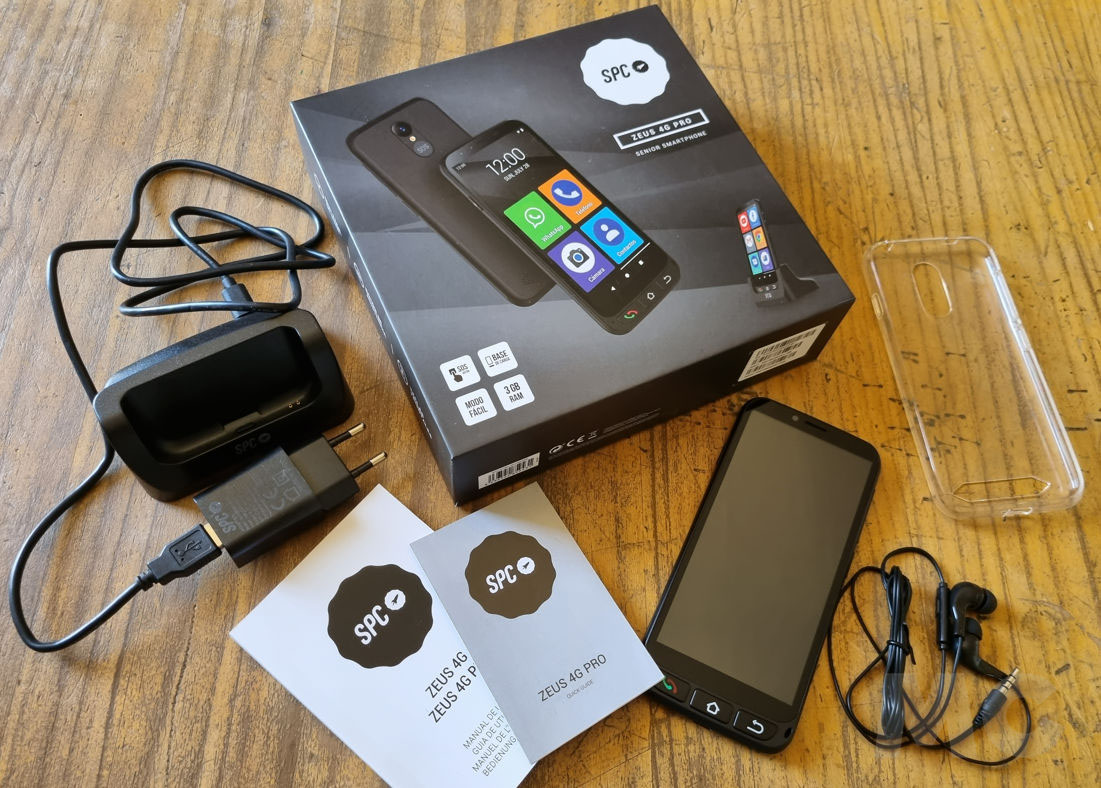 This ZEUS pre-installs Android 11 as operating system. Its installation is known and very simple, since you only have to follow the screens, but yes, it is better to do it previously with the son/grandson and deliver it already well configured. A Google account is almost essential to take advantage of the possibilities of a terminal that by default does not differ from others on the platform. 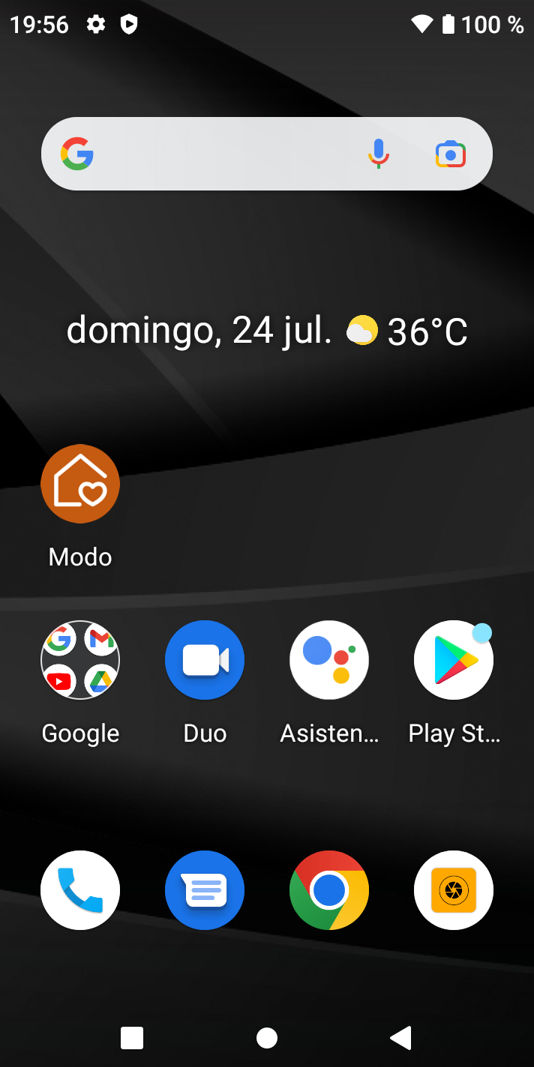 But SPC, like the other manufacturers, provides a own interface whose name «Easy Mode» already tells us what it means. The classic Android interface changes in favor of one adapted to the use of older people, where the icons of enormous dimensions and striking colors stand out, changing for each app with the aim that the user with loss of visual abilities can identify them more easily. 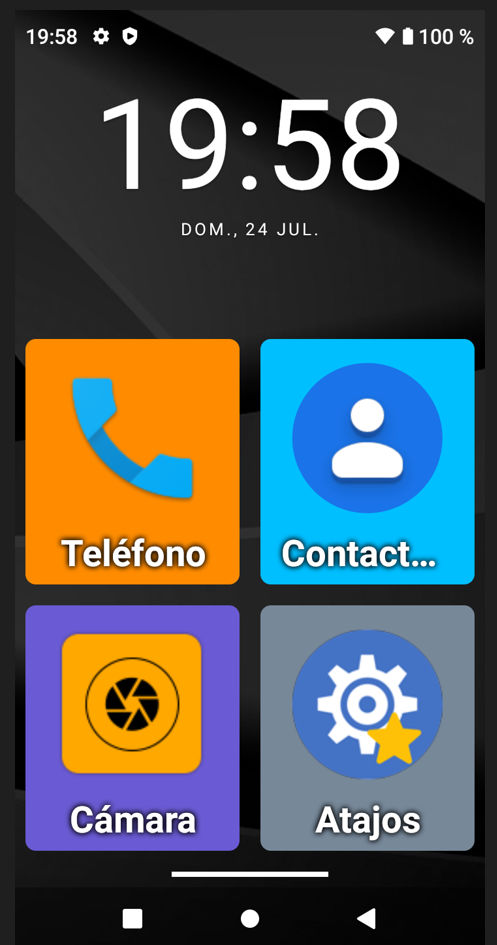 Contact with the closest relatives has to be a priority in this type of mobile and the ZEUS allows you to place large photographs and the names of six favorite contacts who can be called or send a message just by pressing on their icon . 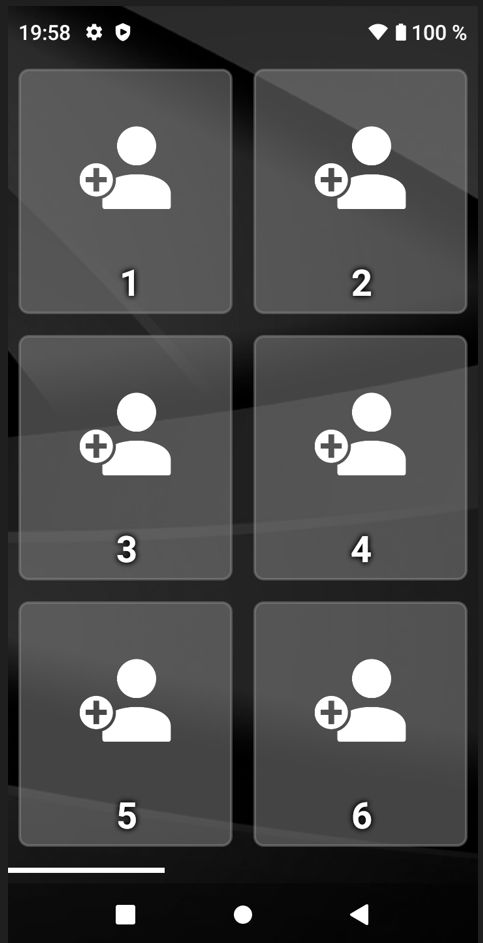 Another of the adaptations to the general interface comes with the “Shortcuts” tool, which allows you to activate and deactivate with a simple click the most used smartphone settings, such as Wi-Fi, Bluetooth, airplane mode, mobile broadband, etc. 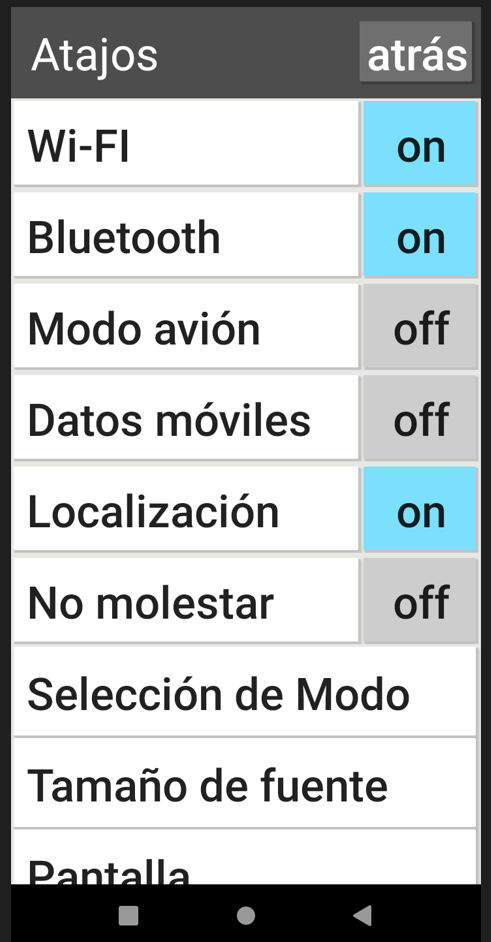 Regarding access to applications, the terminal adds an option called APPS that allows its management. With a simple touch, all the pre-installed apps downloaded from the Play Store appear. You can also select the most used ones so that they appear on the screen or hide the ones that you are not going to use.

As well adapted as the user interface is, and this model is with the aforementioned Easy Mode, people of a certain age will need additional help that the manufacturer solves with a group of special functions for children or grandchildren to control remotely some settings of the terminal or receive notifications in case of unusual behavior of the mobile. This Smart Help intelligent care feature includes three general options:

Comment that this group of functions can be activated at will in the SPC support center. Its use or not will depend on the physical “level” and capacity of each user. Although our grandparents are generally quite “wrecked” from a lifetime of work, there are differences between them when it comes to using a smartphone. Simply age (70 has little to do with 90 years) marks important differences.

The good thing about the terminal at hand is that can be adapted to various age groups and, for example, older people with more capacity can disable these special functions or even ‘Easy Mode’ and opt for the classic Android user interface, but keeping the physical buttons or the SOS button.

The lucky ones who have the opportunity to review the best electronic devices on the market, we try to squeeze every last MHz and FPS in the analysis with all kinds of tests and benchmarks. In a cell phone like this, all that goes into the background and ease of use should be the fundamental standard. SPC says it has designed this terminal with you in mind. “Let him be the one that suits the elders. And not the other way around».

To verify it, we have taken the terminal to our own grandmother (87 years old) so that she can tell us her impressions. Like many people her age, she normally uses a ‘dumb’ shell-type mobile phone, which is the format that surely best suits the possibilities of the elderly due to its ease of hanging up and picking up voice calls. Here compared: 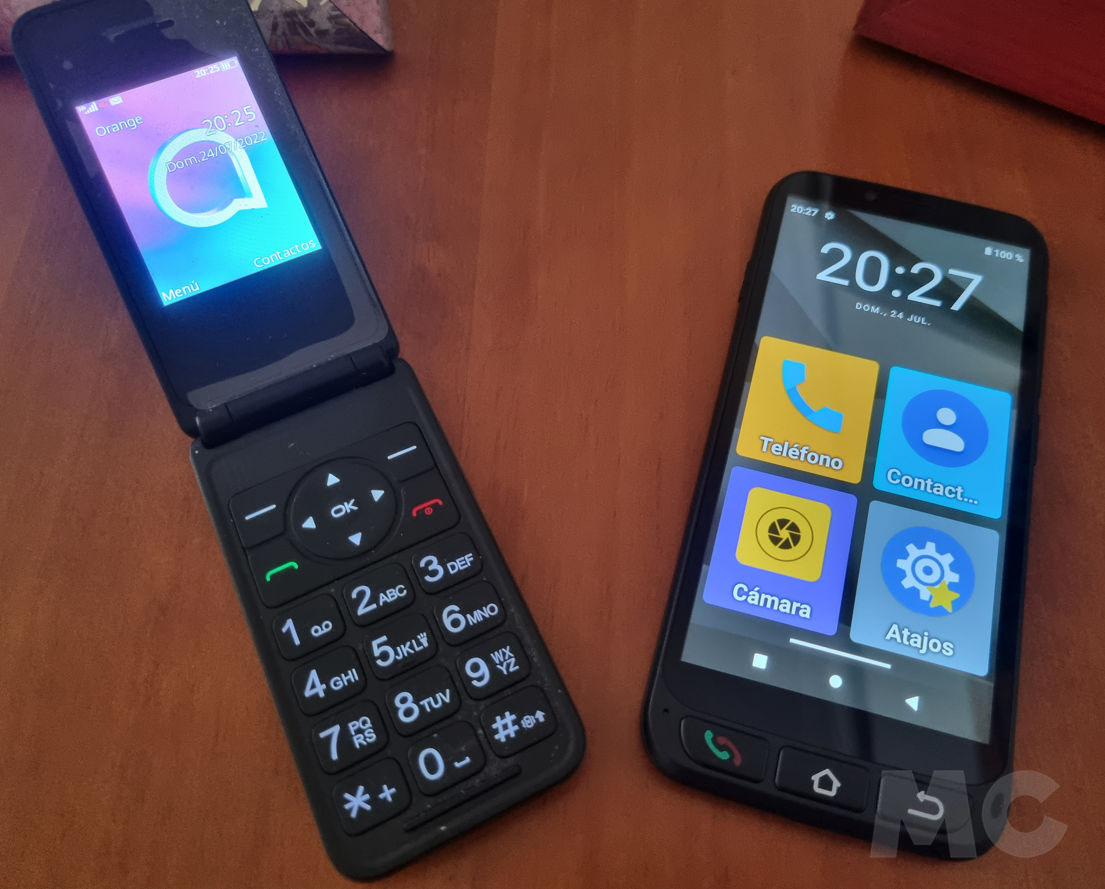 It must be said that the initial use of the ZEUS 4G PRO has been difficult despite the help. The terminal is very large compared to the one she was using, complicating its use with one hand. In addition, the presence of an ‘all-screen’ terminal with touch interface and access to the Internet and its services imposes to start. 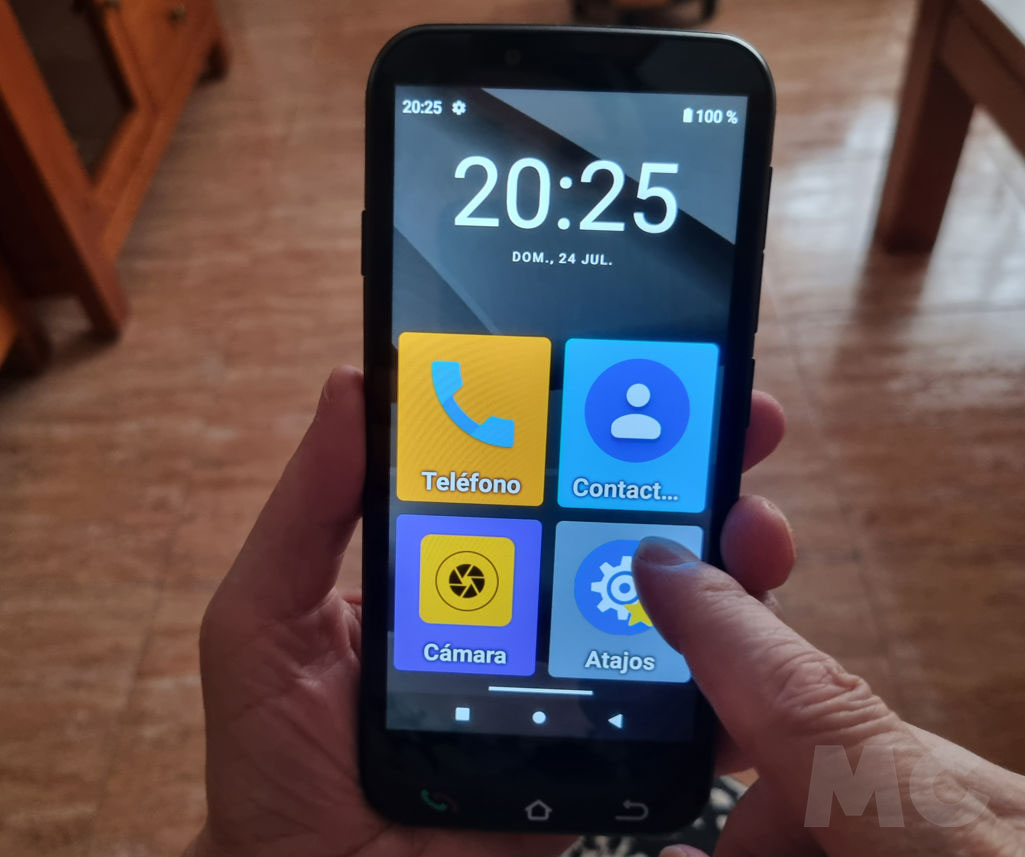 But it’s all that, start. The terminal’s physical buttons, for picking up/hanging up, home and back, are a complete success compared to the touch interface button panel and an undoubted help for an older person who is more accustomed to interactivity with physical buttons. 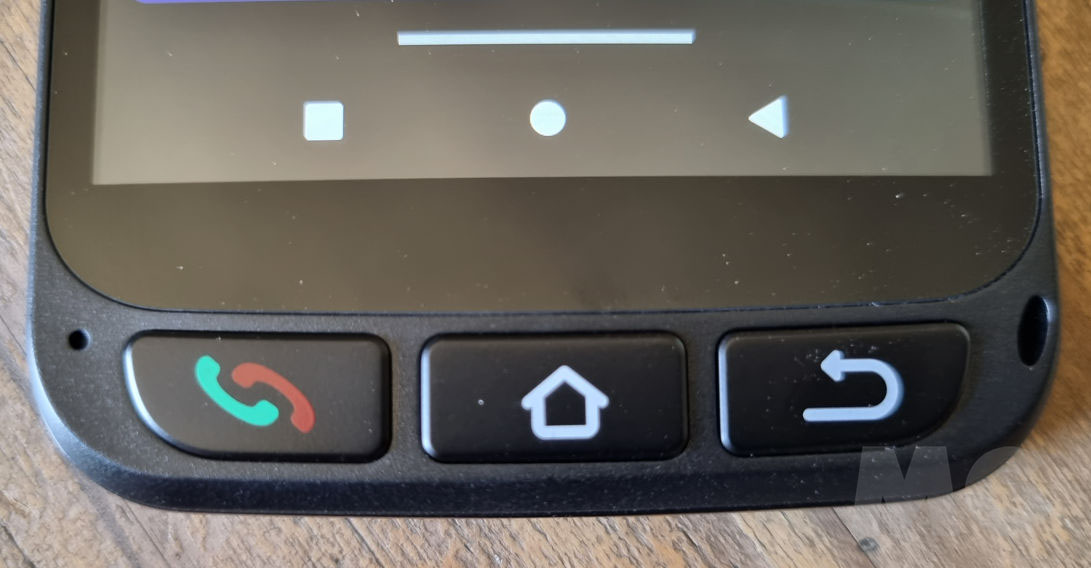 The SOS button gives a lot of peace of mind and in fact it is one of the components you have asked us about. It is located in an easily accessible position at the back and once pressed, it calls and sends an SMS to ask for help with information on geolocation to 3 predefined contacts. If there is no answer, it will make three rounds of calls and messages and will emit an audible signal so that people nearby can help.

Another section that has delighted him has been the videoconferences. During the pandemic, we had already brought him a tablet so that he could see relatives who live abroad and, well, with his mobile, being able to do it regularly is a gift. And he has “caught” it at first with the nine contacts available and accessible by means of a couple of clicks.

We haven’t gone much further. In this case, it is quite large (and it is quite broken) to mess with the Internet, navigation and applications. But everything will work… The offers to hire a 4G connection in Spain are quite cheap (not much more than a fixed line) and it is likely that we will end up hiring it. 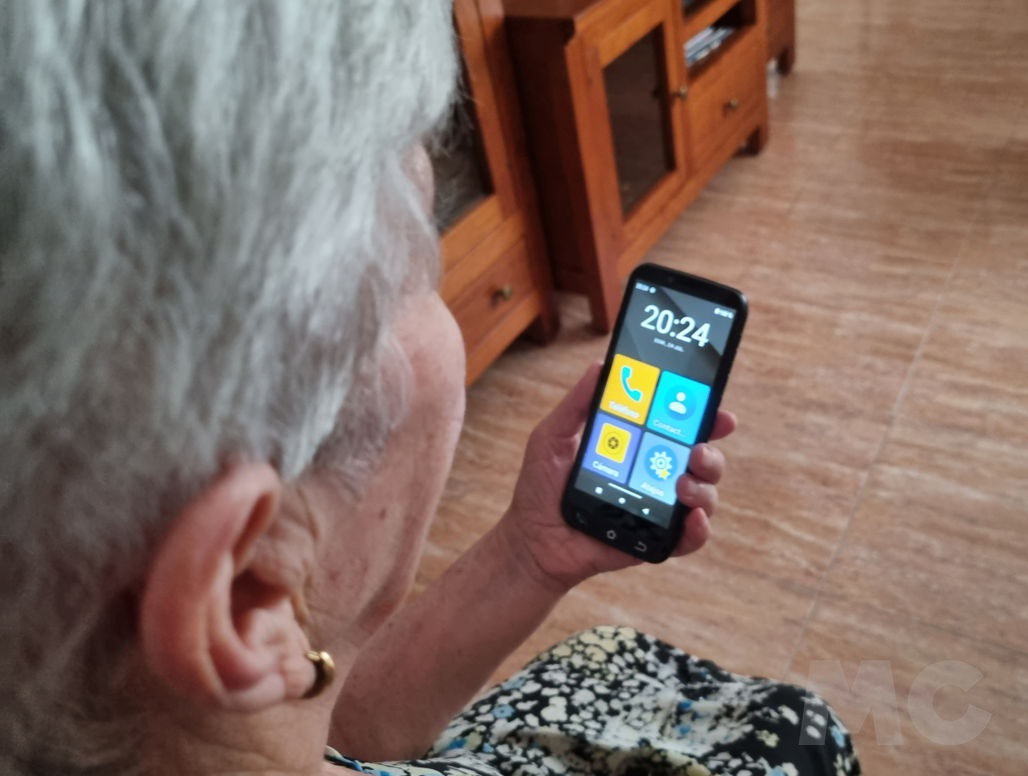 The most advanced terminal for the elderly in the SPC catalog is a real gift for our grandparents. It allows them to get closer to new technologies and the unlimited possibilities of the Internet and its services. Depending on their age, physical ability or interest, it may be difficult to get started, but once they’ve gotten the hang of it they probably won’t go back to ‘dumb’ mobiles.

SPC ZEUS 4G PRO offers decent performance for an entry-level terminal. Its construction and finishes are correct and its screen has a generous size to allow the adaptation of the operating system to the user’s needs. Although it delivers the standard Android interface by default, the Easy Mode created by SPC is well resolved and the Smart Help intelligent care functions are very useful in being able to provide remote help

In terms of connectivity, 4G and Wi-Fi 5 are more than enough, although in this section we have to highlight the built-in charging base, much easier for older people to use, and also the SOS button that has to be standard in this type of terminals. The operation of the cameras is simply correct, the main one for light captures and a front one that is also sufficient for videoconferencing.

SPC ZEUS 4G PRO is available on the manufacturer’s website for 149.90 euros, one price which we can consider quite reasonable for what it offers. It can also be purchased in the retail channel such as Amazon, which usually has it for sale slightly reduced from the official price.

SPC has other phones for the elderly in its catalog, where the Zeus 4G stands out, very similar to the one in question in terms of screen size and functions, with a lower price of 119.90 euros.

SPC ZEUS 4G PRO is a good gift to celebrate Grandparents’ Day. The most advanced smartphone in the firm’s catalog for the elderly, which adds to decent hardware an adapted interface, remote help, an SOS button and the possibilities of accessing the Internet and its services. 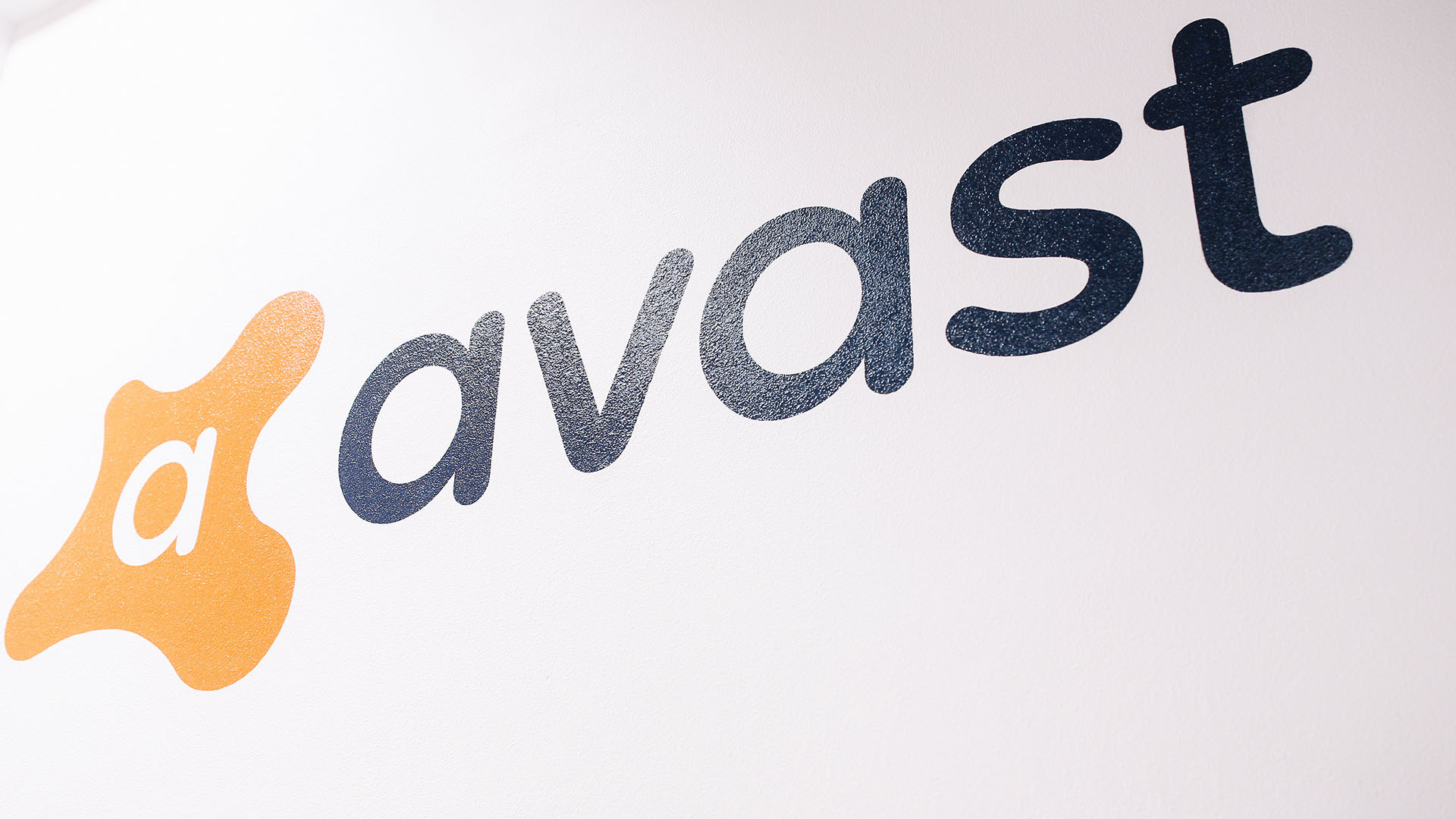