Unsurprisingly, Spotify confirmed its first place on the podium of the biggest streaming services last year. Far behind, we find Apple Music and above all, Amazon Music, which is on the heels of Apple’s platform.

The music streaming market was still doing very well in the second quarter of 2021, according to the specialized firm Midia, which counted nearly 524 million subscribers worldwide (this represents a growth of 26.4% compared to the same quarter of 2020, or 109 million additional customers). Nearly a third of them, 31% to be precise, subscribe to Spotify, which remains far ahead of the competition.

Amazon Music on the heels of Apple Music

Nevertheless, the service dominates the sector less than a year earlier, since it lost 2 points compared to the second quarter of 2020. Given the heightened competition in this market, this is hardly surprising. And then Spotify remains firmly in first place: Apple Music is certainly second, but far behind with 15%. Apple Music, which should be wary of number 3, Amazon Music and its 13%: the e-commerce giant’s service has recorded annual growth of 25%, compared to 20% for Spotify. 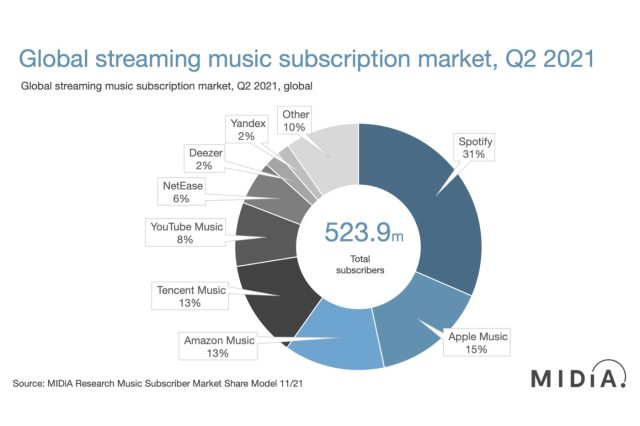 Midia notes the excellent health of YouTube Music, which has benefited from subscriber growth of 50% over the previous twelve months. Google’s platform seems to resonate more strongly with young Millennials and Gen Z. Spotify should take note and do everything in its power to appeal to this clientele.

Another lesson of the study, the regionalization of offers. Tencent Music and NetEase Music already account for 18% of the overall market even though these services are only available in China. Russian Yandex doubles its subscriber base and reaches 2% of the total sector.