Goodbye to “Ok Google” or almost

Interaction with a voice assistant is not always as comfortable as most of us would like. Sometimes because they do not understand expressions that we say to them in a more natural way, as we would say them to a person and they would know how to understand without the need for a previously predefined structure. Which is interesting as some are too robotic.

At other times, the annoyance of continuously using the classic “Ok Google” activation command is that it is very repetitive and not very agile. If you give the assistant occasional use through your mobile phone or compatible smart speaker it will not be a big problem, but when you use it constantly throughout the day things change.

Well, Google has been working on a feature or enhancement for Google Assistant that lets you forget about using “Oh Google.” This new option is called or will be known as Quick phrases or shortcuts, although in English they are called curiously as Sauces.

It basically consists of a series of sentences that do not need that previous activation command so that the loudspeaker knows that you want it to do what has been defined. Because, for now, that is the function of the command, allowing the Google assistant to know when it should take action or not.

Android 12 and its best in Google Assistant

The new shortcuts or quick phrases feature for Google Assistant has not yet officially arrived. That is, in 9to5Google they saw that the Latest APK corresponding to the voice assistant of the company were found these references and data of the new function that Google prepares. But there is no confirmed date for its staging.

Everything seems to indicate that it would do so with the official launch of Android 12, the new version of the operating system for mobile devices and that it would later be expanded for use in new versions of adaptations for televisions through Android TV or Google TV, smart watches with wearOS, etc.

So it’s a matter of waiting a little bit more, because Android 12 set its final release date for early next October 2021.

How Quick Phrases or Shortcuts Will Work 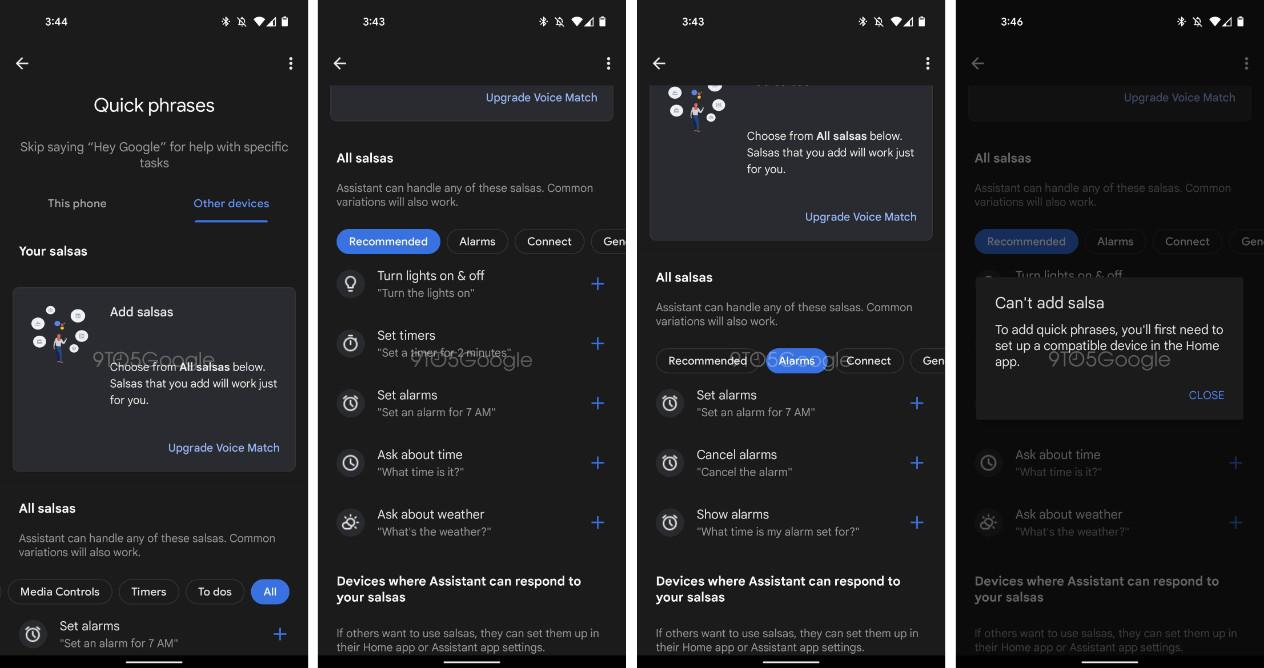 As it is not an option available today, there are details that we will not be able to tell you with complete certainty, because even having more information could change from here to its launch. Still, we can tell you what the basis of all this will be.

The quick phrases or shortcuts will be a series of commands that will allow you to interact with the Google voice assistant without having to pronounce its activation command or hot word (hot word) as they know it in Google.

This will be so because as if you defined another activation command, the speaker will know that there is a group of phrases that have been configured to suit the user. Therefore, you can set the action you want to the selected phrase from among those that are in effect. Knowing how they will work, the quick phrases or shortcuts of Google Assistant can be classified into different categories: recommended, alarms, connection, general information, controls, timers and pending tasks.

Within these categories you will find phrases with their corresponding actions. Some minor variations of them will also work and you just have to select which ones and on which device you want to use them. From here, some of the Quick phrases, shortcuts or Sauces are these:

All of these will be the commands or actions that will not need a trigger word. They are common and widely used sentences throughout the day by any Goolge Assistant user. And they will mean an improvement that should gradually provide more additional options. Because it is much more comfortable and faster to say. “Turn up the volume” and “Turn off the lights” to have to say “Ok Google” before each of the sentences.

Who will be able to use the quick phrases

First of all, any user of a device with Google Assistant will be able to use this new option. Although you should know that to avoid problems it will be through the speech recognition Voice Match as it will ensure that only the owner of the product can access personalized or personal information. With the arrival of new functions to the different voice assistants, it is true that the first question that most users already ask themselves is: what will happen to my privacy? Well, let’s see, nothing should change at first and if you feel safe using one of these assistants, why not continue to do so.

Here Google is not going to activate a constant listening that would analyze and process each sentence in search of an action to take. What it will do is change two activation phrases “OK Google” and “Hey Google”. So you can be calm.

Surprise! The whole Kaamelott series has arrived on Salto

What is IP protection? We explain it to you