Users have a growing need for data storage, and for this reason storage product manufacturers are striving to offer solutions of increasing capacity. If a few years ago having a 512 GB SSD was practically a luxury, today 1 and 2 TB capacities are almost the standard, while devices with 4 and more TB capacity are almost the order of the day. Mind you, 8TB SSDs like the one TeamGroup announces today are rarer, essentially because they’re still pretty high priced.

TeamGroup MP32Q, now with up to 8TB capacity

The new 8TB model of the TeamGroup MP32Q SSD uses QLC Flash memory chips and the PCIe 3.0 x4 interface. It also supports the high-performance NVMe 1.3 protocol and Dual Cache SLC Caching and DRAM Cache Buffer technologies, thereby offering all the guarantees of performance and durability (the 8 TB capacity model has a durability of 1,800 TBW and 5 years warranty, that although it is not an ideal SSD to mine Chia precisely but even so with a normal use of gaming PC that writes 30 GB a day we are talking about more than 150 years until its durability is exhausted).

In terms of performance, this SSD is in line with the rest of solid state drives with PCIe 3.0 interface, since it offers up to 3,400 MB / s of read speed by 3,000 MB / s of write speed, so we really are not to nothing out of the ordinary except for its massive 8 TB capacity. By the way, the SSD does not come with a heatsink because it does not even need it, since according to the manufacturer’s data, practically nothing is heated and Thermal Throttling is never produced. 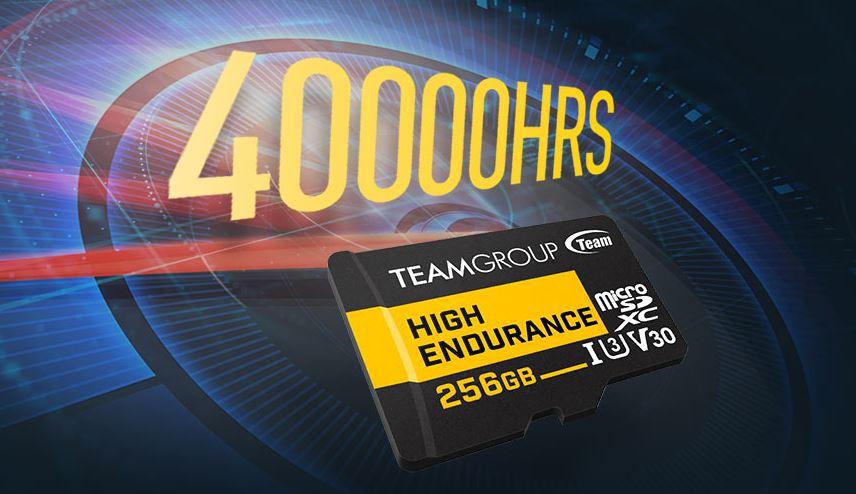 In addition to the SSD, TeamGroup has also presented its new family of memory cards in micro SD format HIGH ENDURANCE, specifically designed for surveillance equipment and systems that have to be switched on recording 24 × 7. It has a class V30 video speed (up to 100 MB / s reading and 30 MB / s writing) and the great novelty is its high resistance, since the 256 GB capacity model has a durability of 40,000 hours (this is 1,666 days or 4.56 years) at constant 26 Mbps.