The latest AORUS Gaming BOX is product code GV-N308TIXEB-12GD, and is equipped with the latest addition to NVIDIA’s Ampere graphics card portfolio, the RTX 3080 Ti with GA102 core. Thus, this external GPU offers the same type of connectivity and cooling solution as predecessor models equipped with RTX 3090 and RTX 3080, requiring only a Thunderbolt 3 connector and external power to operate the system.

AORUS Gaming BOX, add an RTX 3080 Ti to your laptop or mini PC

The AORUS Gaming Box is an external GPU based on a case with considerable dimensions, and this is so among other things because in addition to making room for the large size that the NVIDIA RTX 30 Series have, it integrates a solution for AIO liquid cooling for the GPU, equipped with a 240mm radiator that ensures good temperature operation and low noise from the GPU.

The water pump is placed on top of the water block that not only makes direct contact with the GPU die, but also with the memory chips and MOSFETs so that they do not suffer from high temperatures. With custom short tubes that carry heat to the radiator, the radiator is cooled by two 120mm fans each. 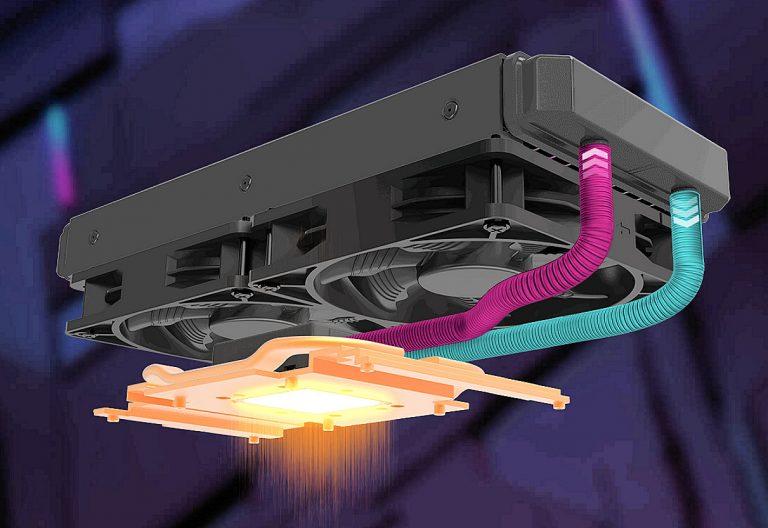 In addition to the aforementioned, the case has both side and top vents to promote good internal air flow. It also incorporates three DisplayPort 1.4 and two HDMI 2.1 as video outputs, and also adds some more connectivity to the equipment because it has two USB 3.0 ports and even a Gigabit Ethernet RJ-45 connector, something that will come in handy to Ultrabook users who lack serial LAN connectivity. All of this is powered by its own integrated power supply, of which AORUS has not disclosed either the power or its efficiency certification.

The connector Thunderbolt 3 It can also transmit power if it is connected to a laptop, avoiding having to connect the device to the power thanks to the protocol USB PD. The GeForce RTX 3080 Ti built into this AORUS Gaming BOX model is not overclocked out of the box, so its boost speed remains at 1,665 MHz.

This product is not only aimed at gamers who want to be able to play on their laptop or mini PC, but also seeks to attract the attention of content creators and professionals who are looking to accelerate their software through a powerful GPU. In any case, it must be taken into account that the product is not currently listed in online stores (yes on the manufacturer’s website) so for now we do not know its price, although you do not have to be very knowledgeable in the matter knowing the price of the RTX 3080 Ti which will be notably expensive.

A new build is coming to Windows 11, with news in Teams and fixes

Be careful: add more transparency to Windows 10, improve automatic sending of emails and other news

Do you have a euro? Take these maintenance programs from IObit