The Galaxy Z Fold 4 will, like its predecessor, be S-Pen compatible. But a new rumor claims that it won’t eventually have storage for its stylus, unlike the Galaxy S22 Ultra. Samsung’s goal would be to refine the product, which would be incompatible with the integration of a space for the accessory.

The Galaxy Z Fold 3 is the first foldable screen smartphone compatible with an S-Pen stylus. And we had the opportunity to notice it when we tested it: the S-Pen brings real added value to a product whose professional use is preponderant. This beautiful 7.6-inch screen offers enough space to open several applications and edit Office documents like on a real tablet.

Read also – Galaxy S22 FE: Samsung will finally not use a MediaTek SoC in its smartphone

No storage for the S-Pen in the Galaxy Z Fold 4?

A rumor claimed last February that Samsung would have planned to integrate a location for the S-Pen of the Galaxy Z Fold 4. Which would mean that a stylus would be automatically delivered with the product. Admittedly, it would not necessarily be as practical and ergonomic as the Z Fold 3 stylus. But it would have the considerable advantage of being at hand all the time. This rumor is now refuted by a new leak from a recognized leaker, Ice Universe. 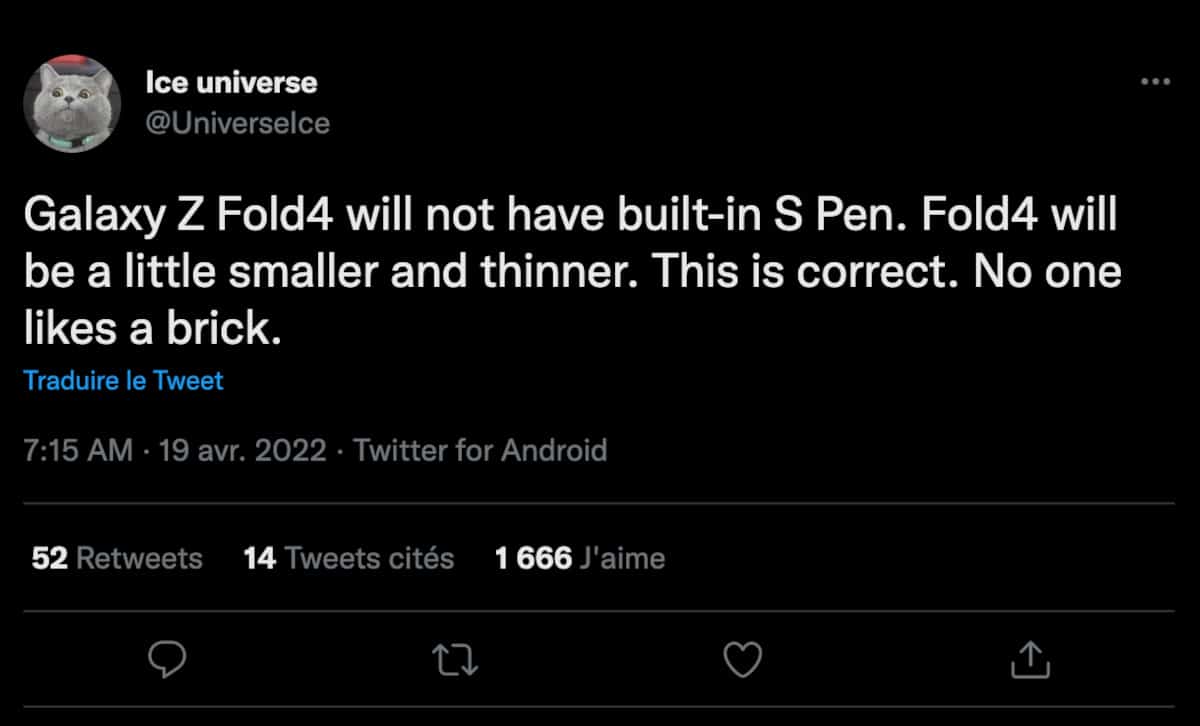 The latter posted a message on Twitter claiming that the Galaxy Z Fold 4 would ultimately not include a slot for the stylus. The reason is simple: Samsung would like to slim down its product. Indeed, when folded, the smartphone measures between 14.4mm and 16mm, depending on where you take the measurement (near the ends or near the hinge), while the Vivo X Fold measures only 14.6 mm, no matter where you measure. In addition, the smartphone would be a little smaller, to be easier to put in a pocket, like the Find N from Oppo.

This new leak seems to corroborate some of the rumors previously circulated on social networks. In particular the fact that the Galaxy Z Fold 4 should integrate two screens slightly smaller than those of the Z Fold 3. Their sizes would reach 7.56 inches and 6.19 inches. This would make the smartphone more convenient to carry. But would it lose practicality vis-à-vis the uses for which it is so relevant? Let’s hope not.

Twitter abandons its Fleets: on the social network, the stories will have lasted less than a year

What to watch the weekend on Netflix, HBO, Amazon and Disney +