In advance of the expected The Game Awards, this week the celebration of The Golden Joystick Awards took place, other of the most important awards in the video game industry in which the players themselves have the option to choose their favorite titles for each category.

Coinciding with the 50th anniversary of video games, this year The Golden Joystick Awards added two special categories of winners, to choose both platform and game «Most important of all time».

On the one hand, when it comes to the hardware section, we find a list that included the best-selling home consoles of all time, going back from the Commodore 64 to the PlayStation 2, which still defends its title of the best-selling console of the history. However, it was a much more current and timeless device that took the first place. And is that the PC managed to accumulate a total of 17% of the total votes.

And who better to accept the award than the head of Valve, Gabe newell, who dedicated a short speech of thanks: «Gamers and developers have benefited greatly from the relentless innovation in PC gaming hardware. On behalf of all those who have made the PC the greatest gaming hardware of all time, I am honored to accept this award.«. 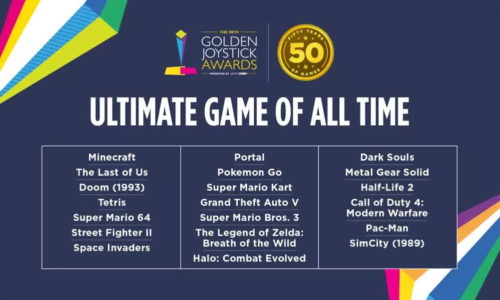 On the other hand, another of the main awards, the «Ultimate Game of All Time» or best game of all time, it certainly had a rather unexpected result. Once again, audiences had to vote from a list of 20 titles that included classic entries like Pac-Man or Tetris, titles that have marketed an entire generation like Half-Life 2, and even more modern popular installments like GTA V.

Nevertheless, it was none other than Dark Souls, a title known to be as frustrating as it is rewarding to play, with one of the highest dropout rates from gamers. Something that did not prevent From Software’s game accumulated 12% of the votes, 1% above the great 1993 Doom classic.

Although of course, these were not the only awards given at the Golden Joystick Awards, with a larger list that included up to 20 more categories:

Bitcoin: the French authorities go to war against influencers who promote cryptocurrency

Google removes 10,000 pirate sites from its search engine in Europe