Microsoft Edge, the latest version based on Chromium, is the best browser ever created by the Redmond factory and has more than enough arguments for the user to use it. Unfortunately, we have to return to controversial issues that have nothing to do with their benefits. That there are many.

And it is that the general problem repeats itself once again. Microsoft takes advantage of Windows’ huge share of desktop computing to drive adoption of its browser through familiar “dark patterns” or other techniques that by action or omission hinder the use of alternatives and in general the free choice of the user. Microsoft doesn’t need these “tactics” to power Edge or the rest of its applications. But here we continue …

Microsoft has blocked the operation of EdgeDeflector in the latest development version of Windows 11, build 22494. It is a small open source tool created by developer Daniel Aleksandersen to counteract the behavioral changes that Microsoft made in the way Windows handles mouse clicks on certain links Web.

The developer claims that it is a “anti-competitive” action and he has put Microsoft in an article where he explains the case. The application was launched in 2017 and has been used by half a million users. “Few” for the bulk of Internet users, but in an approach that has proven popular. So much so that Firefox and Brave recently implemented their own interception code to prevent Microsoft from forcing the use of Edge when opening links. And here we are already talking about 200 million users of Mozilla’s browser and a few others of Brave’s.

The Register has asked Mozilla and they confirm that the block not only affects the EdgeDeflector, if not also to the implementation made in Firefox. «People deserve choices… They should have the ability to set default values ​​simply and easily and their choice of default browser should be respected. We have worked on the code that Firefox launches when using the microsoft-edge protocol for those users who have already chosen Firefox as their default browser. Following the recent change in Windows 11, this planned deployment will no longer be possible«, Say those responsible for Firefox. Brave’s solution looks like it will go the same way and will be blocked.

In the article, Aleksandersen goes over the technical question in case you want to get thoroughly soaked. Basically only Microsoft Edge can handle the ‘microsoft-edge: // protocol‘. «Third-party applications are not allowed to handle it as the default protocol association cannot be changed through registry changes, OEM partner customizations, or other modifications to the Microsoft Edge suite«.

The developer says that Windows will force the use of Edge even if you delete it, opening an empty UWP window and presenting an error message instead of resorting to the default browser. Complicated situation.

And the browser choice system itself

The above is not Microsoft’s only “effort” to power your browser using questionable techniques. We already inform you of the changes implemented in Windows 11 for the selection of the applications that open each type of file by default and specifically for what concerns us with the web browser.

In Windows 8.1 and earlier versions, when you installed an alternative web browser to Internet Explorer, the software offered to set it as the default and if you chose, that was all you had to do. In Windows 10, programs cannot be automatically defaulted, including browsers, but selection is still straightforward from the menu present in the Settings tool.

For Windows 11 Microsoft has made relevant changes, since it is necessary make this choice for each type of extension and protocol associated with the browser (HTM, HTML, PDF, SHTML, SVG, WEBP, XHT, XHTML, FTP, HTTP, HTTPS…). The most “hard” users (like me and many of you who walk around here) we welcome it. I use several browsers and I like to take advantage of each of them in each protocol.

But obviously we will be “four” users that we will personalize it in such a way. The rest (many millions) just won’t be bothered by its complexity. As Windows Edge opens everything by default, the objective will be achieved: Microsoft will be able to boast of a greater number of users when, if the choice were truly free and transparent, the numbers would change. 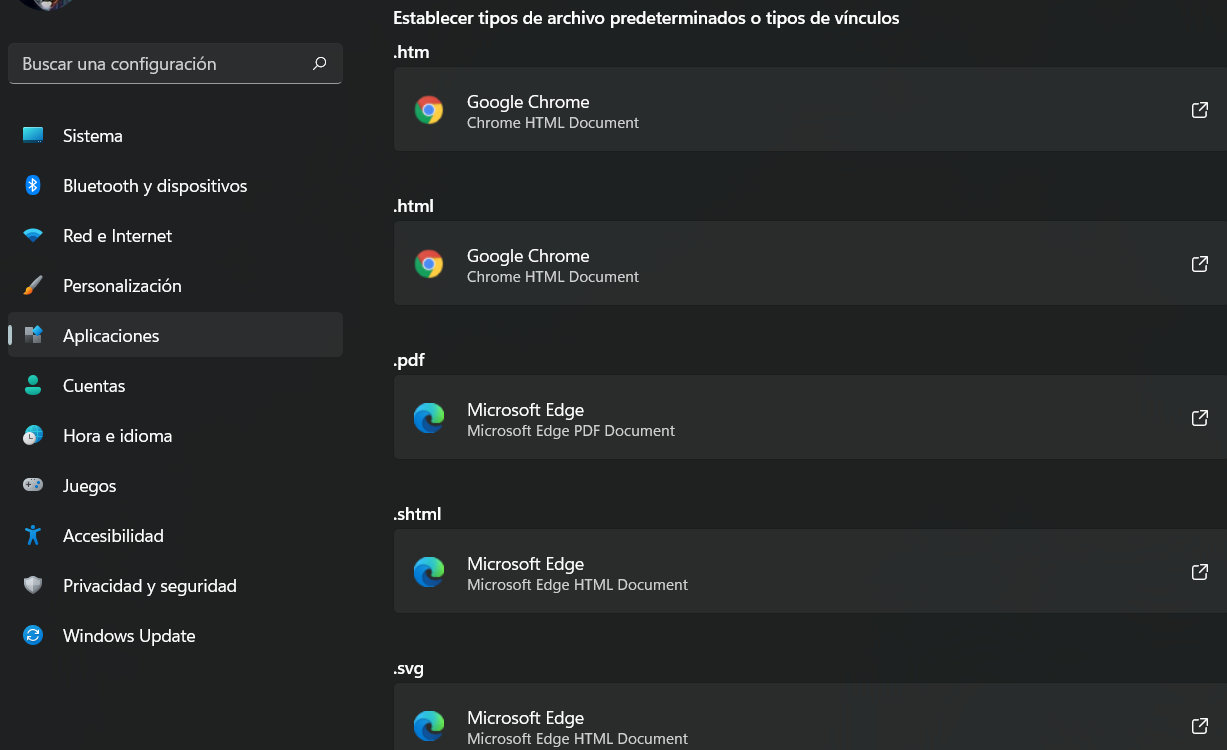 Will we return to another browser war?

Well, we will see. The developer of EdgeDeflector it says that it will not update the tool again under these conditions because it would ‘break’ Windows 11. «These are not the actions of an attentive company that cares about its product«, He assures, focusing on another section that Windows 11 has also brought, the opening of Microsoft Edge (and not the browser chosen by the user) of all the links of the new sections of news and interests widgets: «Microsoft is not a good administrator of the Windows operating system. You’re prioritizing ads, bundles, and service subscriptions over your users’ productivity«.

Aleksandersen goes further to overcome this situation: «For the users, the best action is to file a complaint with your local antitrust regulator or switch to Linux. Your web browser is probably the most important application, if not the only one, that you use regularly. Microsoft has made it clear that its priorities for Windows don’t align with those of its users.«.

The complaints have been repeated from Mozilla and Brave and The Register says it has asked the US Department of Justice if it is aware of this change and, if so, if it is concerned given Microsoft’s previous convictions for abusing its market dominance. (Do you remember the browser selection screen?) They expect answers and users too.

You know our opinion: Microsoft Edge is a great browser and it doesn’t need this kind of trickery to increase its adoption. The rest are gimmicks, hype, dark patterns, and a misuse of Windows market share. The user deserves transparency and total choice.

These Are The 4 Deleted Scenes You Didn’t See In Thor: Love And Thunder

Why is Stranger Things season 4 split into 2?