Bearing in mind that these data only represent the failures or reliability of the devices that the company has to its credit, and logically the market is not talked about in general, it is interesting given the huge number of HDDs tested and also working 24/7 /365 without rest. Who will be the winner and who will be the loser?

Last year was really complicated for HDDs and also for SSDs: what if Chia cryptocurrency, opening of SSDs for consoles, prices with rises and falls, but above all a question of reliability that had to be put to the test given the new technologies that are being implemented such as HAMR or MAMR.

Therefore, Backblaze added no less than 40,640 drives to its HDD farms for a total count of no less than 206,928 drives, of which 409 must be subtracted for various statistical reasons, making a total of 202,759 HDDs. They are all data drives and not boot drives as such, they are all HDDs, so there are no SSDs in the way mainly because they haven’t offered any stats so far, so the comparison is even more interesting when comparing apples to apples .

Hard drives with more failures or more reliability of 2021 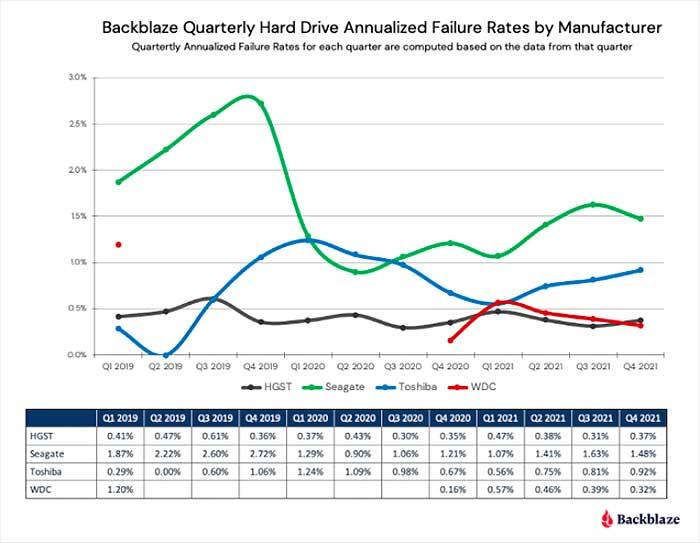 It is curious how the same HDD evolves year after year. It may be that over time it fails more, which on the other hand would be predictable, while in other cases what we have is the opposite, they fail more at the beginning and then the units that follow fail much less. With this, the HDD that achieved a lower failure rate was the ST6000DX00 with only one 0.11% of defective units. 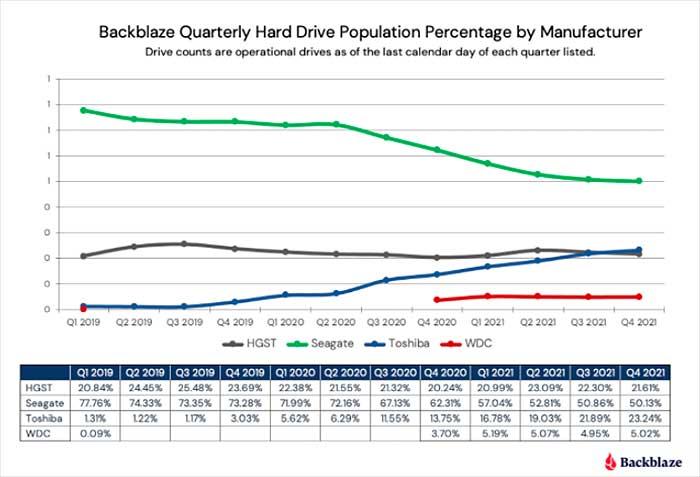 If we make the comparison by brands in percentage terms, it is precisely Seagate that comes out worst, while Toshiba follows it in the ranking although at a distance and the best would be Hitachi/WD where there are hardly any units exceeding 1%, although Toshiba has increased its percentage with compared to two years ago.

Backblaze has commented on some data extracted from the commented conclusions, and it is that the Seagate that fails the most is facing a failure rate at a higher rate than expected, so the company is monitoring and analyzing them. What they have been able to make clear is that the firmware updates that have been made to them lowered the failure rate from 6.29% to 4.79% and now it seems that it continues to drop, since they would be around 4.66%, which is still a lot.

So you can earn money surfing the Internet Intel Blockscale ASIC for Bitcoin, for select customers only

Intel and Samsung vs TSMC, NVIDIA and AMD, a war about to break out?