SSDs are currently reaching performance levels never seen before, and this is not being limited only to internal SSDs with a PCI-Express interface but also to external devices, since new connection technologies are providing much more width of band than ever. This is the case of this SSD that Sabrent has shown, which takes advantage of the Thunderbolt 3 connection to provide the best performance ever seen in an external drive.

The device has by name Sabrent Rocket XTRM-Q, and has a 2.5-inch external hard drive design although in reality it has two NVMe SSDs of 8 TB capacity each one inside, which of course has its own RAID controller that allows the user to configure them in the way that prefer: in RAID 0 for performance up to 2,700 MB / s, in RAID 1 to have 8 TB but with redundancy to safeguard the data in the event that one of the two internal SSDs fails, or in JBOD mode that simply creates a 16 TB volume or two of 8 TB each to store data without using RAID.

The device has interface Thunderbolt 3 It comes with a USB-C connector for maximum compatibility and versatility, and as you will see below for its price, it is a device more well designed for professional users who need to be able to transport large amounts of data from one place to another. 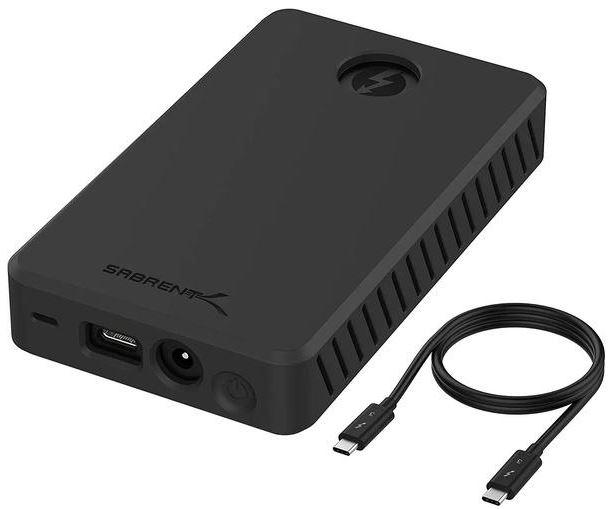 Before we mentioned that the Rocket XTRM-Q is basically an external 16 TB SSD with a Thunderbolt connection but that it incorporates two NVMe SSDs of 8 TB each inside; With this alone you will surely guess that its price will be quite high simply because of the hardware that it integrates inside, but if we tell you that Sabrent intends to put it on sale for a whopping 2,900 euros, How do you stay?

Really and being realistic, it is not that high a price either, since we are talking about some 18 cents per GB storage, while “mainstream” SSDs recently dropped below 10 cents per GB of storage, something that is not always true of devices with a PCIe 4.0 interface that are still relatively expensive. To put this in perspective, it is currently easy to find 1 TB SATA 3 SSDs for 100 euros or less, while if we go to PCIe 4.0 units, their price is around 200 euros, which comes out to 19 euro cents per GB, more than this SSD from Sabrent costs.

But of course, we are talking about an external SSD that has 16,384 GB, which is why its price is so high in the end. Therefore, it is an SSD with a great performance and that is not really too expensive, but of course, it will be necessary to see if there are many people willing to pay 2,900 euros for it.

This function, which was carried out since Windows XP, disappears in Windows 11