Measuring the performance of any CPU that is based on a heterogeneous configuration of two types of cores is difficult to say the least, especially since it depends on the way in which the operating system allocates its threads to the hardware. And we can not forget that Alder Lake will use two types of CPU core inside, as confirmed a few days ago. So the results of its performance are variable.

In particular, Intel has created a way to assign work to the different cores called Thread Director, which is a combination of hardware and software and is more efficient than the conventional methodology, which did not work well in Lakefield. Although despite the additions to the Alder Lake hardware, it still depends on the operating system. We will have to wait for the final and optimized version of Windows 11 to see the Alder Lake CPUs in all their glory. 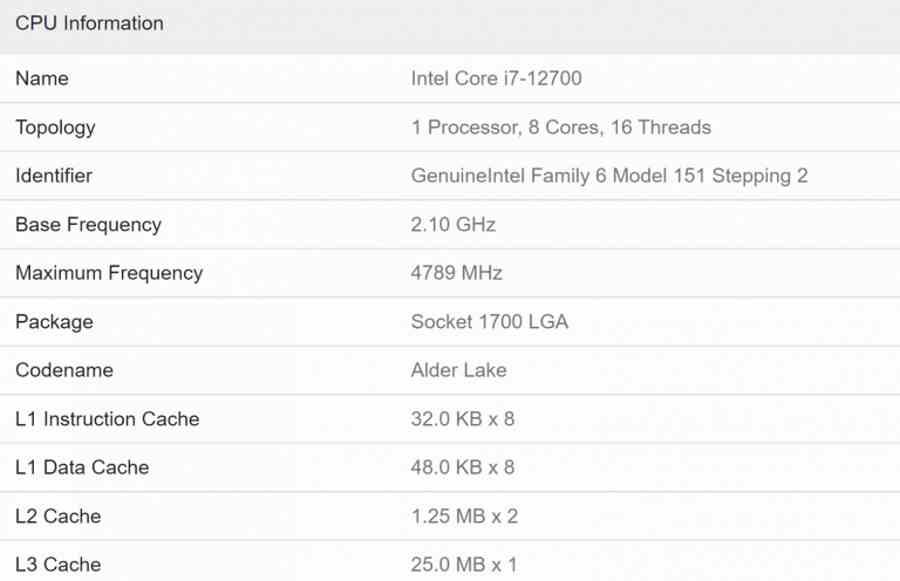 Since there is already the final version of the different processors with Intel’s Alder Lake architecture, little by little they appear in the benchmarks. Which not only gives us information on its performance, but also on its technical specifications. In the case at hand, the CPU they have put to the test is the Intel Core i7-12700K. As can be seen in the data obtained from the benchmark, its base clock speed is 2.1 GHz and the maximum is 4879 MHz. However, we cannot forget that we have two types of cores inside the processor and we do not know which of them is measuring the benchmark.

Regarding the performance in Geekbench 5 we have that the Intel Core i7-12700 gets 1595 points in the single-core test, a number that surprises negatively if we compare it with respect to its direct predecessor under the same benchmark, the i7-11700 that obtained 1633 points. We have to bear in mind that Intel has taken the same strategy as AMD with its new processors, improve the CPI generation after generation, which should be reflected in these performance tests.

On the other hand, in the test that uses all the processor cores, we have a result of 10170 points, which supposes a 15% increase over i7-11700. If we take into account the addition of Atom-type cores, it is surprising that the result is so low. Although we do not know if the Geekbench takes them into account.

And how about what AMD offers? Well compared to the AMD Ryzen 7 5800X it has a 5% worse performance in a single core and 2% in multicore. Which is partly a disappointment, but let’s faint, this CPU is not yet for sale, so it has room for improvement.

Gaming mouse: how the DPI value works in this peripheral

Protect your data! Create strong passwords with these 3 programs