The Atari ST was a computer launched by Atari Corporation in 1985, which was the product of the division of the mythical Atari after the sale by Time Warner of the company in 1984. Which was divided into two halves. The first Atari Games call ended up in the hands of Japan’s Namco and contained the games and software division. While the second called Atari Corporation was created by the Tramiel family after the patriarch, Jack Tramiel, was fired by the shareholders of the company he had founded: Commodore.

The first project for a 16-bit computer by Atari had to be the Amiga, since the design team for the 8-bit Atari was the same as the one that had made the Commodore Amiga, but in the end Atari Corporation had to create your own design. Which was influenced by the greater success of the Tramiel in their previous company, the Commodore 64.

Despite the curiosity of competing against its old company, the Atari ST was not designed to compete against the Commodore Amiga, but to face the Apple Macintosh and the IBM PC AT. Nor can we forget that the Atari ST had been presented months before the presentation of the Amiga. The business strategy was to take the same aggressive approach they had with the Commodore 64, but in the business market rather than the home market.

The Atari ST like its rival, the Commodore Amiga, made use of the Motorola 68000, the same CPU as its rival, the Commodore Amiga. With the difference that in the ST it worked a little faster than the Amiga when going to 8 MHz instead of the 7.16 MHz of the Commodore PC. Remember that the 68000 is a CPU with 32-bit registers and instructions, 16-bit data bus and 24-bit addressing. The latter limited the amount of RAM in systems with such a CPU to 16 MB at most, however this was better than the 1 MB limit of Intel’s 8086 and 80286 and their 20 addressing bits.

Regarding the performance of this CPU, it was better than the 8086 and this gave the Atari ST a better performance than the original IBM PC and XT PC. Although inferior to the 80286, but the strength of the ST was to offer a computer at a competitive price compared to the IBM PC and the Macintosh. Battle that lost against the PC due to the market share of this and the enormous amount of software available for the PC.

The acronym ST stands for Sixteen Thirty Two, which translated into Spanish means sixteen thirty-two. In reference to the size in bits of the Motorola CPU registers and data bus. But, the CPU is not the only thing that a computer has inside it, so we are going to do a review of the rest of the hardware.

As for RAM, the first ST was released in two variants. The first called 520ST with 512 KB as standard and the second with 1 MB as standard under the name 1040ST. So from the outset it had much more RAM than the first Macintosh and the Commodore Amiga. The ST also had 192 KB of ROM memory, which included a series of routines to speed up the operation of the operating system. 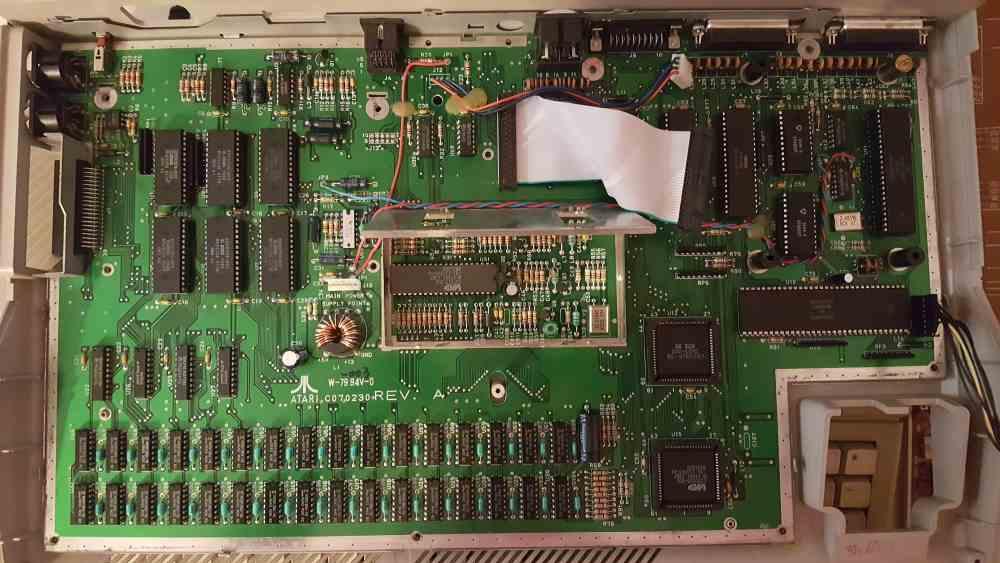 A computer lives not only on its CPU, but also on supporting processors or accelerators. Which free the processor from certain tasks, perform them more efficiently or add capabilities that they did not have before. The four support chips they were totally custom and created by the Atari Corporation itself. Their names? They didn’t try very hard, as these were: GLUE, MMU, DMA and SHIFTER.

Although they were not the only support chips, since in the design added other chips already available on the market. How is the driver for 3.5-inch floppy drives WD 1772, the controller 6850 for I / O interfaces. The Motorola 68901 for interrupt management and sound generator YM2149 which was based on three square wave channels and one noise channel. Rudimentary compared to the Paula chip in the Amiga, but much better than the screeching speaker found in PCs.

MMU and DMA unit are key in ST One of the limitations that the 68000 had compared to Intel’s 80286 was the missing an MMU unit, which was key to running a complex operating system. For the ST they added an MMU unit in the form of a separate chip that is responsible for generating the memory addresses for the rest of the chips, but it cannot access the RAM directly, a function performed by the DMA unit with which it works together. so that the rest of the logic can access not only the RAM, but also the data on the disk.

As we have said before the MMU was key to moving a complex operating systemIn the case of the ST it was the TOS, Tramiel Operating System. However, unlike the Amiga’s operating system, it was not multitasking. Nor was it a problem since the IBM PC and Macintosh equivalents weren’t either. Actually the TOS had a graphical mouse interface called GEM that was combined with GEMDOS, an operating system with characteristics similar to MS-DOS, all this to show a user interface very similar to that of the Apple Macintosh.

This was because the MMU included in the ST, unlike the x86 MMUs, did not support virtual addressing by pages or segments. Being the pair of the MMU and the DMA unit rather a way to give addressing and unified access to all the components of the system that needed to access the RAM of the system.

GLUE, the most important Custom Chip 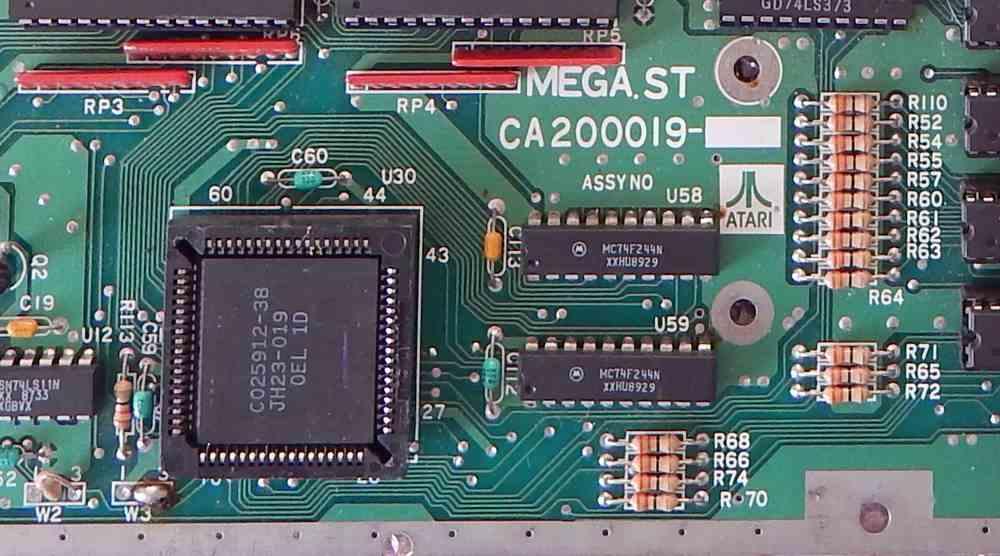 Among the four custom chips in the Atari ST, the most important is the so-called GLUE. Which was responsible for keeping the CPU and the rest of the support chips together, hence its name, which in Spanish translates as glue. What was the GLUE’s job? Generating the different operating frequencies of the system, for example it was responsible for generating the frequency of 8 MHz for the CPU, 2 MHz for the YM2149 or 500 KHz for the I / O interfaces such as MIDI and keyboard ports.

It was also responsible for generating the video signals for the SHIFTER, such as the horizontal and vertical synchronization periods (HSYNC and VSYNC), as well as the blank signal times (HBLANK and VBLANK) and whether the screen is active or not. . In general, all support chips are designed to depend on each other when performing their function, which was done with the aim of saving costs in the final hardware design. Therefore, the GLUE was also part of the video circuitry of the system by generating the necessary signals to correctly send the information to the screen.

The ST was never thought of as a video game machine, unlike the Amiga, which was born as a design for a console that was expanded to be a computer. The ST has a very rudimentary video system that lacks elements such as scrolling or scrolling support or even a generator of sprites or moving objects. These elements were also not found on the IBM PC and the Apple Macintosh.

At that time, the screen generation was carried out by the CPU and what was known as a graphic system, all it did was transfer the image buffer created by the CPU into a video signal. Because the RAM of the time was single channel, this meant that in all systems when the image was being drawn on the screen, the CPU and the rest of the elements could not access the RAM.

The image buffer was generated by the CPU, which generated 32 KB of data in a specific part of the system’s RAM and supported the following resolutions in its image buffer:

Like the IBM EGA and the Commodore Denise, it was based on bit planes, but could only display up to 16 colors on screen like the EGA, although it had a larger color palette available thanks to its 9-bit DAC that gave it access up to 512 colors. So in general it was inferior to the Amiga in the graphic section. 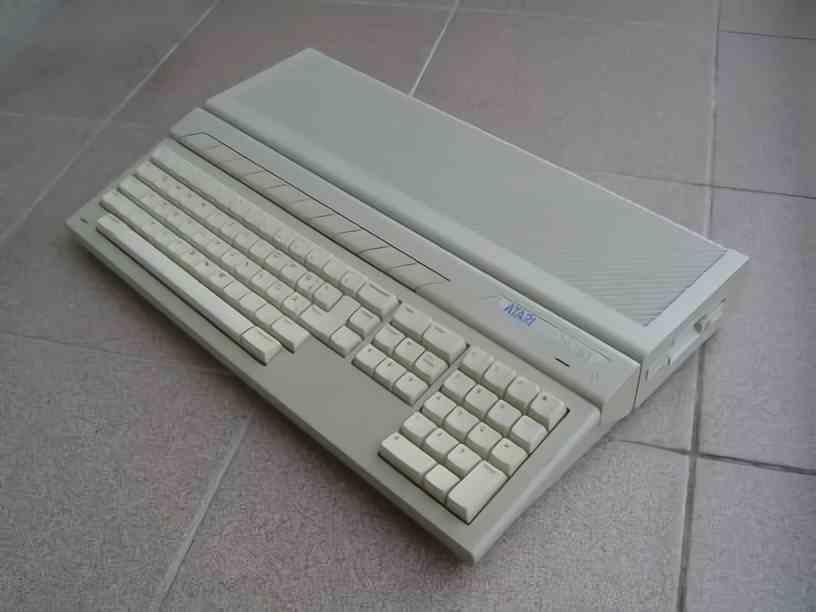 Despite Atari’s attempt to compete face-to-face with IBM and Apple, the Atari brand so closely associated with video games and the lack of software did not allow them to have a significant market share. And even though the Atari ST ended up being successful in the home market for the first few years, most users used it for video games. Computers in homes were little more than glorified video game consoles, the ST’s hardware was short for it.

The demand for video games in the ST was answered by the Atari STE, an improved version of the base hardware of the ST added a series of improvements over the original hardware:

Of all the hardware added, the most important was that of the Blitter, since it allowed the transfer of data blocks from one part of the memory to another with data transformation operations on the fly. This made it possible to improve the graphics and speed up certain routines in the programs. However, the STE continued with the limitation of 16 simultaneous on-screen colors and for Atari it was not enough to cope with a cheap Commodore Amiga 500 and a PC that would eventually prove intractable and would become the sole survivor of said battle. .

This is Loab, the creepy woman created by an AI that appears everywhere

Be careful when throwing your printer in the trash, it could contain your data

NOX HUMMER Frost, review: a simple and cheap case for any PC