This means that we will have the possibility to start working with our computer from the first moment we turn it on. Then, we only have to install the applications that we are going to use, or make some adjustments and customizations of the system. This is something we do in a few minutes so that we can start getting the most out of the new Pc sooner.

In these first months the truth is that in most cases everything is advantages, the PC works without problems, the operating system is fluid, etc. However, time spares no one, not even our Computer equipment. And it is that as the months and years go by, both the hardware and the software that in principle worked so well, have declined. That is when it is time to renew some of the components of our desktop computer. This is something that is especially noticeable if any of these suddenly start to fail.

Reasons to change a hard drive in Windows

Along these same lines we want to focus on one of those components, ok they were treated as fundamental, we are referring to hard drives. Here we save both the operating system and the installed apps or own data. Therefore, they are elements without which we cannot work. The problem comes when one of these hard drives begins to give problems, does not work, has run out of space, or is simply out of date in terms of performance.

These are some of the main reasons we can find ourselves and why we make the decision to change the storage unit. It is a process that in principle no one likes, but in the short term it will help us save a lot of time and be more productive. Therefore, whether due to failures, available space, to have a higher performance, a great decision is to change the main hard drive of the team.

However, at this point we may have some doubts related to the installed operating system. And it is that possibly as many of you have ever heard, the Windows license is directly associated with certain hardware components of our computer. Therefore, before changing our hard drive for a new one, some of you may wonder how to do it without losing that license.

Change the disk without losing the key or license

Well, at this point something you should be clear about is that the activation process of Windows is done through an ID. But this identification number is taken from the data of the motherboard that we have installed in the computer. Likewise, the association how he is is stored in the cloud automatically for later retrieval if necessary.

Therefore, this means that at first we should not have any problem when making a hard disk change. Of course, another very different thing would be the fact that we need to change the computer board, perhaps things are a little more complicated. But this is not the case at hand, here we are interested in changing the main hard drive, which we see that in principle does not affect the key activation of the system. Let’s see the steps to achieve it in a simple way.

We are going to assume that we want to perform a clean installation of Windows on the new hard drive while maintaining the same license. Before changing the hard disk, from the Windows that works we download the media creation tool from Microsoft itself. From it we have the possibility of downloading the ISO image of practically all the versions of Windows that we have at our disposal at the moment.

Of course, what we must be very clear about is that we will have to download exactly the same version or edition of the system so that we can recover the license. Therefore, if we have an edition key home, we go down to it, for example. The same happens with the Pro version or with any that we have installed.

Next, what we are going to do with this IS imageOr is it to create a pen drive bootable car from which we can install the system on the new hard drive once we have replaced it. We have at our fingertips a multitude of programs that serve us for this, but one of the most functional while used is the one known throughout the world Rufus. This presents us with an intuitive user interface to carry out these tasks that we are commenting on. Here we will only have to specify the origin where we have saved the downloaded ISO image, in addition to indicating the usb drive where we are going to copy it. Once the program is started, internally it will transfer that image to memory and now that it is it will be auto-bootable.

Install Windows on a new disk

Therefore, once we have performed the disk hardware replacement tasks, for example, changing an HDD for an SSD, we connect the bootable key to the PC. We are talking about the USB memory that we created earlier with Rufus so that the computer can boot from it and install the system on the new disk. We may need to make some changes to the BIOS to alter the boot order and specify the USB port.

Next, the usual installation process of the operating system will begin, but already in the new unit that we installed before. It is also important that in this case we use the same user account with its corresponding credentials that we use on the old disk. Thus, once the operating system connects to Internet, if we are lucky it should detect automatically incorporate the windows key in the new facility. 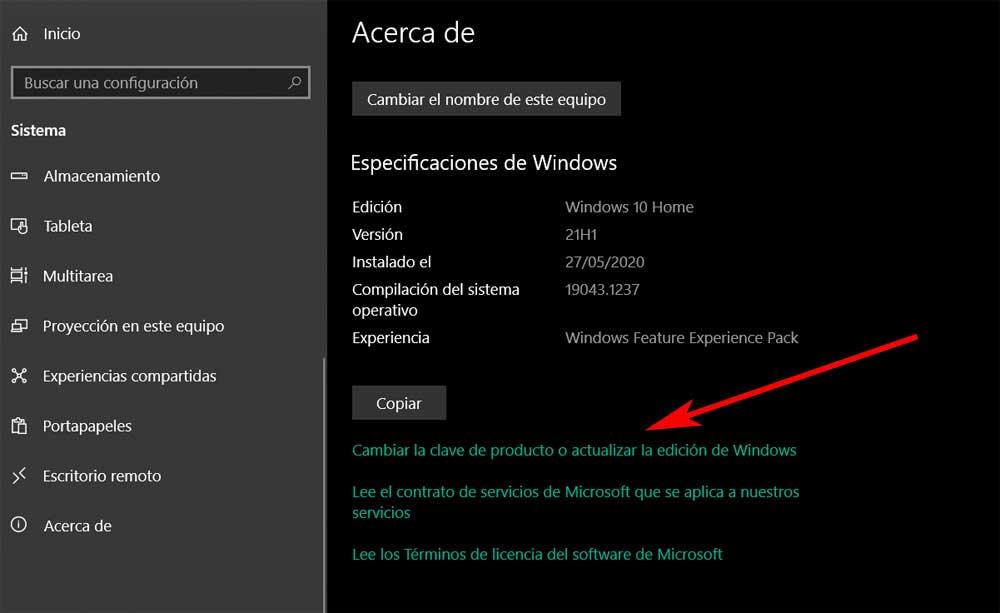 In the event that this is not the case, we can access the configuration application through the Win + I key combination. In the System / About section, we can manually enter the Windows key that we used on the previous hard drive .

What’s new with PCI Express 5.0 SSDs? we tell you

In gaming keyboards for PC, what differentiates Logitech from other brands?

Problems opening a PNG file with Photoshop? put a solution