Visual Studio Code, VS Code for friends has become in recent years, in a dazzling way for the speed at which things move in the world of programming, the most popular code editor on the scene. It has also done so with all of the law: based on a meteoric advance by the work and grace of Microsoft, whose main success with the application has been to detach it from certain technologies and open it to the multiplatform spectrum, including especially Linux and, now, the web.

In effect, Visual Studio Code becomes a web application … or what is the same, it is converted into a web application, as it has always been in part. Like other Microsoft applications, Visual Studio Code is based on Electron, a framework open source for the development of desktop web applications around web technologies whose two pillars are Chromium, the free web browser from which Chrome, Microsoft Edge, Brave and many others derive ;, and Node.js, an environment in time of cross-platform execution based on the JavaScript programming language.

Electron brings great ease to move web applications to the desktop, which is why it has become one of the most popular technologies of the moment to create cross-platform applications for Linux, Mac and Windows. Electron allows the same code to be reused for all platforms, reducing the complexity of application maintenance. Examples of important applications based on Electron there are many, outside and inside Microsoft: Microsoft Teams, Skype, Discord, WordPress Desktop, Slack, Simplenote, 1Password, Evernote …

Of course, Electron is not perfect, far from it, it is not even an optimal solution as a technology on which to build native cross-platform desktop applications. One of its big complaints from users, not developers, is the impact complex applications have on system resources. This is due to Electron’s own principles: JavaScript is not an efficient language for creating interfaces; Components such as Chromium’s multiprocess are performance driven, but they detract from consumption …

And yet, Electron is an alternative that has been very welcome to enjoy cross-platform applications that otherwise they would not have been. Now, well, how is it possible that Microsoft is succeeding with Visual Studio Code, with how demanding code editors tend to be … or IDE, since the power and versatility of Visual Studio Code can be considered as a complete development environment integrated? The question has several answers without leaving the framework that Electron prints.

And is that Electron is a project developed and maintained by GitHub, the most popular software forge in the world. And what did they make Electron for? In principle, as a proof of concept, although the Atom code editor emerged from its development, a novel approach that ultimately served as a source of inspiration for Visual Studio Code. And as you know, Microsoft is the owner of GitHub, so the direction of Electron is in their hands.

The latter explains the software giant’s commitment to Electron, as well as the quality of implementation achieved by Visual Studio Code. What it does not explain is the success of the program: the success of Visual Studio Code is, as already indicated, in the impressive pace of development with which Microsoft maintains the application, which translates into constant progress and improvements at a rate one version per month. Since Microsoft’s announcement of the purchase of GitHub, Atom development has also fallen apart.

Both Atom and Visual Studio Code is open source software, although its official distribution is done through executables that are not. Despite this, the most purists will find derivatives in the community that are one hundred percent compatible and one hundred percent free, although they are more common in systems where open source predominates, such as Linux. Microsoft’s interest in attracting Linux developers is possibly one of the reasons that Visual Studio Code has been developed in such a way.

Another aspect in which Atom and Visual Studio Code are similar is the availability of extensions, add-ons with which to significantly extend the suite’s functionalities and thanks to which customizing and providing the editor with as much competence is needed is really simple, in contrast to the use of IDEs or classic code editors, much more efficient in terms of performance and equally powerful, but much more complicated to configure and with a harder learning curve.

That is why, more or less like the old guard, Visual Studio Code has become the preferred code editor for developers, also on Linux, which has its merit. But Microsoft wants to reach everywhere and is now completing the leap from application to the platform from which it emerged, the web. 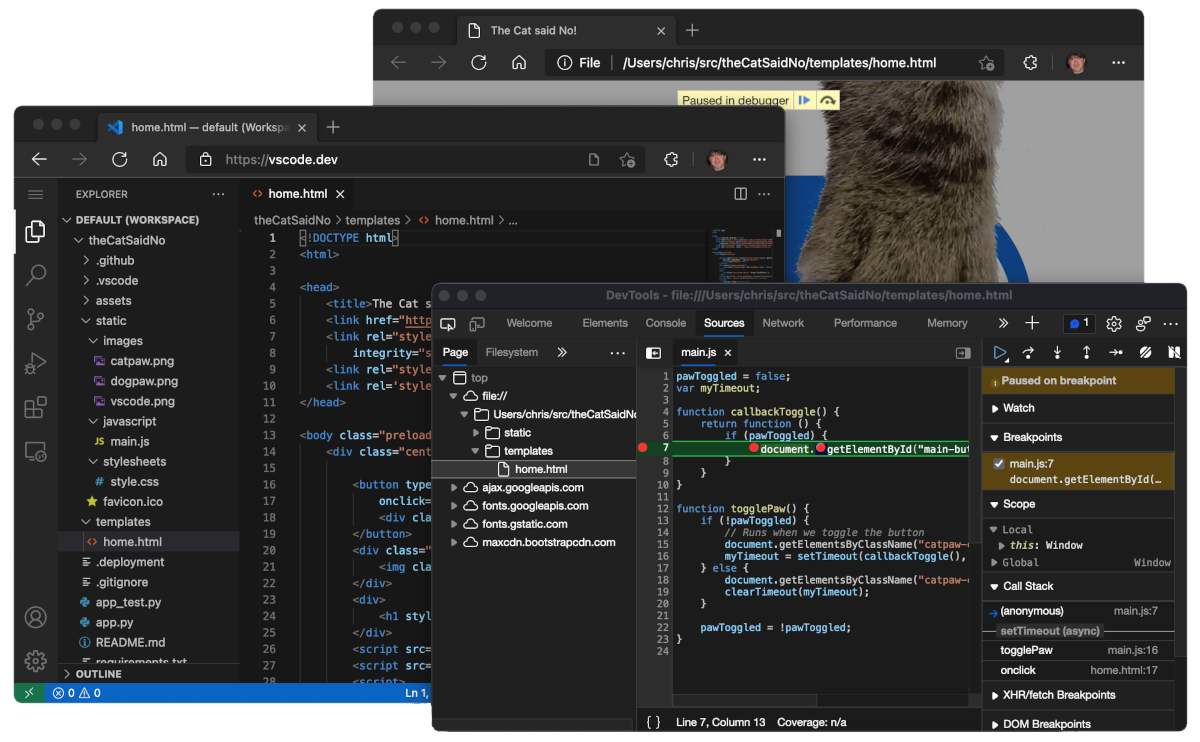 They tell it on the official Visual Studio Code blog, where they give all the details of the new adventure. Broadly speaking, it is the same editor as always, but in version webapp– Allows you to install extensions, synchronize settings using a Microsoft or GitHub account, log into a remote repository, or upload individual files and download them at the end of the session, and even work with local files and directories with a supported browser, including They count practically all derivatives of Chromium like Chrome or Microsoft Edge.

The new Visual Code Web is certainly surprising because it accumulates almost all the power of the current application, with exceptions, such as that not all extensions work … In fact, a majority of extensions still do not, but we are facing a Very first version of this iteration of the editor that, with time and development, can go a long way. Why is it amazing in its current state, you ask? For all that it can become, but also for all that it already is.

Please note: it is a web application, yes, but runs almost entirely in the browser itself. This means that even though having a connection is essential to access and enjoy all its functions, the web technologies that give it life are doing it in the browser itself, and not on a Microsoft server … although it is the synergy between both aspects that interesting about this case.

Of course, if the jump from Visual Studio Code to the web is relevant for something, it is for bringing the editor to almost any platform that can support a modern web browser, including phones and tablets. Ergo, it is finally a truly cross-platform application, even though not all platforms have been designed for programming. Now, the mere fact of being able to consult from the editor -with everything well synchronized, we must not forget it- from the phone is more than a ‘hoot’.

«Bringing VS Code to the browser is the realization of the original vision of the product. It is also the beginning of a completely new one. An ephemeral editor that is available to anyone with a browser and an internet connection is the foundation of a future where we can actually edit anything from anywhere«, Microsoft sums up the trip. Be.

Take a look at: vscode.dev.

Spotify will promote the NFTs of its artists

The mysterious TikTok store that wanted to eat Shein… and failed

Windows 11 now allows you to type text with your voice