And it is not to detract from those who use high-frequency monitors, they are a luxury if you can enjoy them on your computer and it has enough power to take advantage of them. However, it is a waste of money to use a graphics card that can run graphics at higher resolutions and frames per second than what your monitor can display.

How many euros does each frame cost?

Yes, we look at the performance of high-end graphics cards, we will realize a very simple fact, the vast majority of them can play the most demanding games at a frame rate above 60 frames per second in any current game. and without messing up. So much so that when it comes to enjoying any game today, it doesn’t matter which graphics card you buy. Obviously, an RTX 4090 will beat the crap out of them all, but when it comes to gaming on your standard Full HD monitor those stable 60 FPS, though, will really come out on top.

All this regardless of whether you are using the most powerful graphics card on the market or one that costs a quarter of its price. The problem is that graphics cards have completely outgrown the power needed to play the vast majority of games. And in the network of networks you will see comparisons with hundreds of frames per second and where they will tell you what each frame costs. The general feeling? It seems that given the economic situation there are no incentives to buy a graphics card, unless, of course, there is an important change that motivates all this.

The following three graphs correspond to the cost in euros per frame, taking into account the price in Spain at the moment, of the different high-end graphics cards. That is, with a price above 500 euros, in the three most common resolutions: Full HD, Quad HD and 4K.

All graphics cards exceed 60 FPS without problems and the average has been made with the total frames per second that they can achieve. However, for the vast majority of the public, maintaining a stable 60 FPS is enough to have a good experience for the vast majority of the public. That is, for those who have a simple monitor, regardless of its resolution, with a refresh rate of 60 Hz, they will have to pay the following in euros per frame: 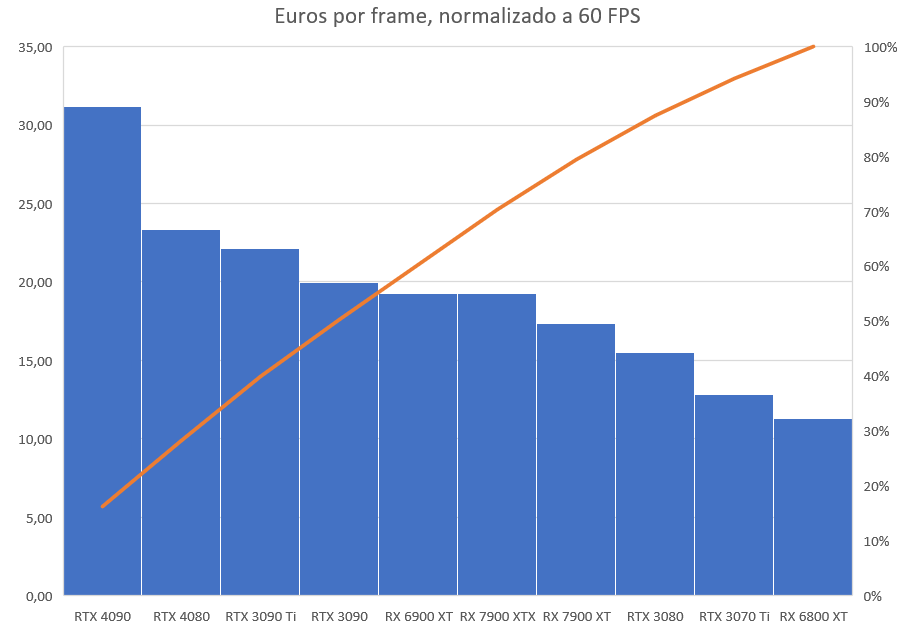 So there has to be an added incentive to overpay for a graphics card and this is where we get into the elephant in the room for AMD.

Well, things become quite interesting, and the graphics that we have seen in the previous section are completely transformed, especially if we are talking about enjoying a game in Full HD and at 60 FPS. What’s more, in a large number of games, even playing at 4K, the average of the NVIDIA RTX 3060 exceeds 60 FPS, without problems. Which makes it an ideal graphics card in terms of price and performance. 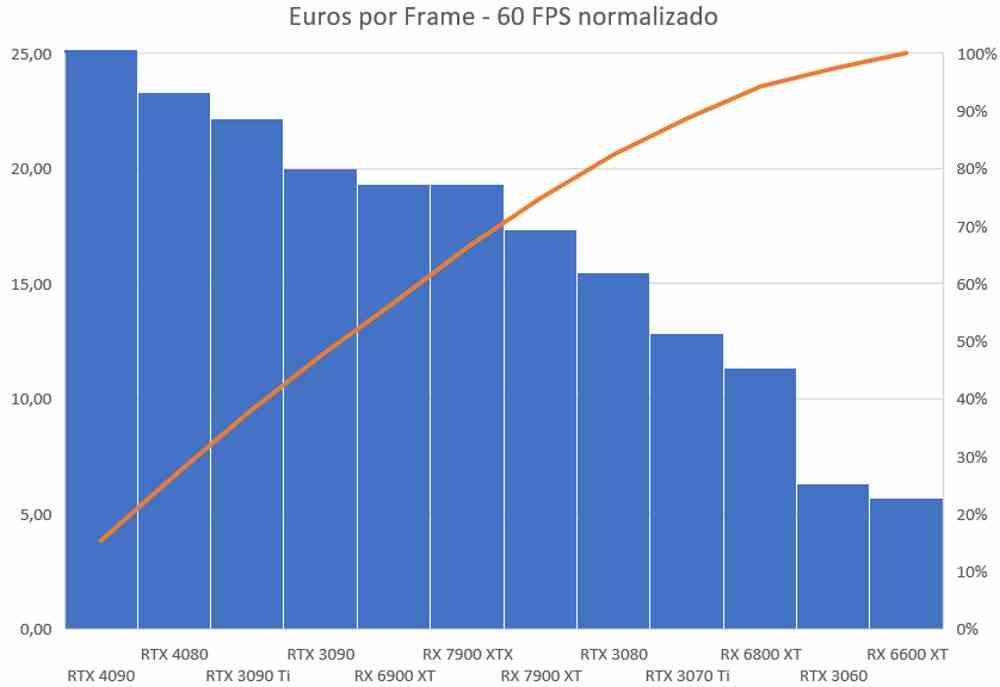 And not only the NVIDIA models, we can talk about the AMD RX 6600 XT, which achieves very similar results, although much fairer to reach 60 FPS in 4K, but it is the highest and least used resolution of all. The point is, if your goal is to play standard framerates without breaking the bank, then both are excellent graphics cards, which can handle any current game, but don’t ask them to run ray-traced games as they won’t they can with her Although that is another matter, but we are going to deal with it below.

In conclusion, if we are not going to use Ray Tracing and we have a 1080p monitor that cannot go above 60 FPS, as you can see, currently there is no need to take a mortgage to enjoy high-quality games and that work smoothly.

This theme is like that of the fox and the grapes, since she didn’t come she didn’t want them. For some time now it was known that graphics cards were going to exceed the power necessary to move the games that were in development, so it was necessary to find a reason that would justify the utility of greater power. NVIDIA found it with Ray Tracing. Lisa Su’s company, on the other hand, has been boycotting its implementation for years, making use of poorer quality implementations that often sound more like a boycott than anything else. In the case of the RX 7900 XTX and XT, it has been the talk of forums and social networks around the world for that reason.

The problem is that comparing the implementation of ray tracing in different games is misleading, in some it is so minimal that it does not affect performance, in others optimizations from one or another manufacturer are used. That is why we have decided to take a rather neutral ground and have opted for Control, the Remedy Entertainment game to measure the performance of the different cards in Full HD and Quad HD and incidentally know how many euros per dollar each one costs us.

Here the high price of the RX 6900 XT stands out, but we must bear in mind that it is discontinued and is the only model for which AMD has not lowered the price as it has been completely replaced by the new RX 7900. It is precisely in this resolution that it is in in which the differences between NVIDIA and AMD are hardly noticeable in terms of cost, however, the graph is deceptive to say the least and we all know that the power of any GPU on PCs decreases over time. That is why we have decided to accompany it by the compared frame rate where all reality is seen. 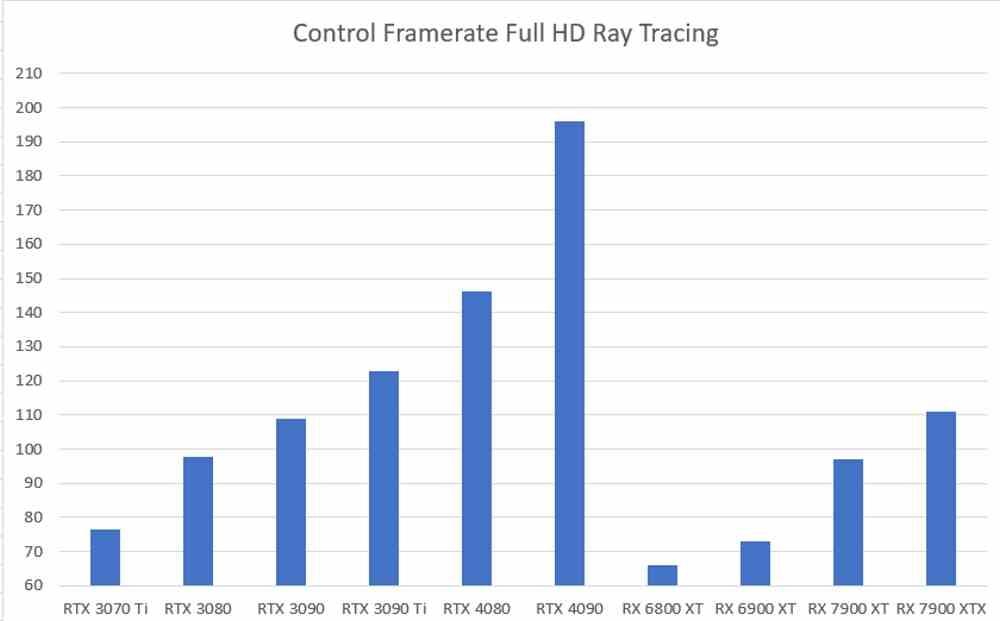 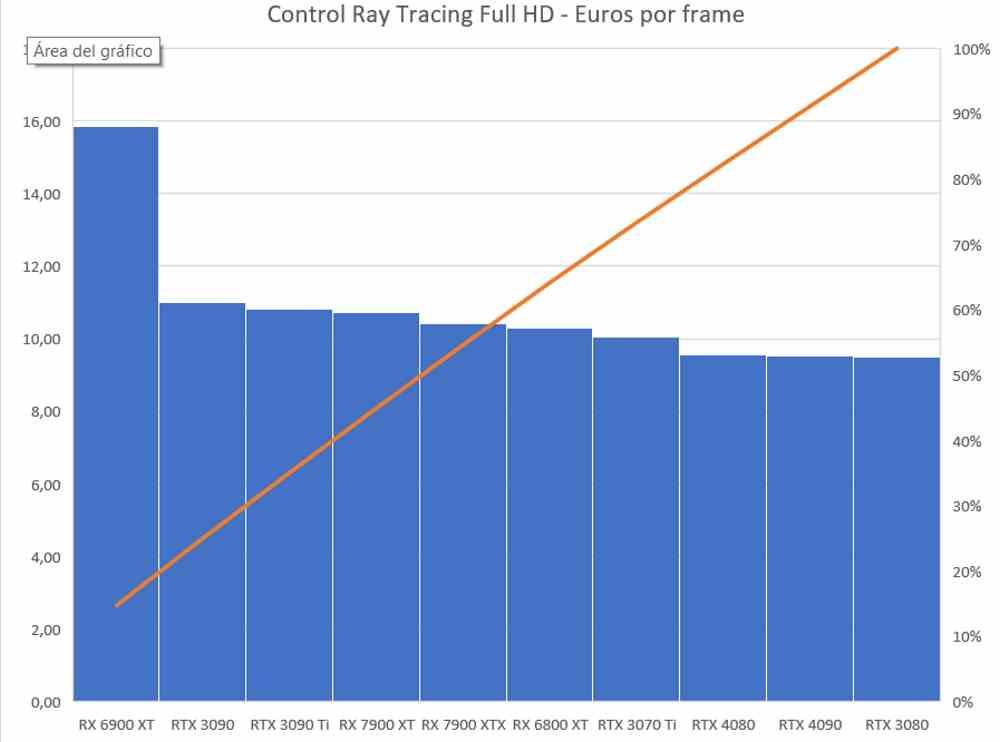 As you can see, the RX 6000 barely manages to raise just over 60 FPS in-game, which will have dire consequences if you use a monitor with a much higher resolution. Luckily for today’s games, two thirds of users have enough with this, but it’s not a good idea to think only in the present tense.

This is already where the massacre begins and where the previous generation of AMD graphics cards are already showing the white flag for the fact that they can’t handle the push of having to push the game graphics to 60 FPS. Although in this case there are the occasional NVIDIA graphics card that is not saved and also with some approved scraping. 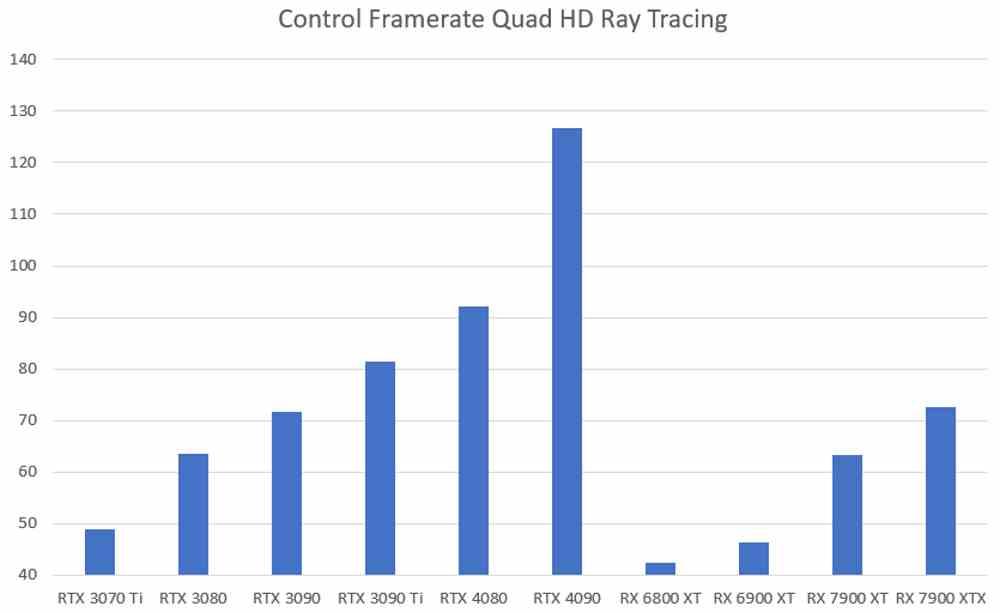 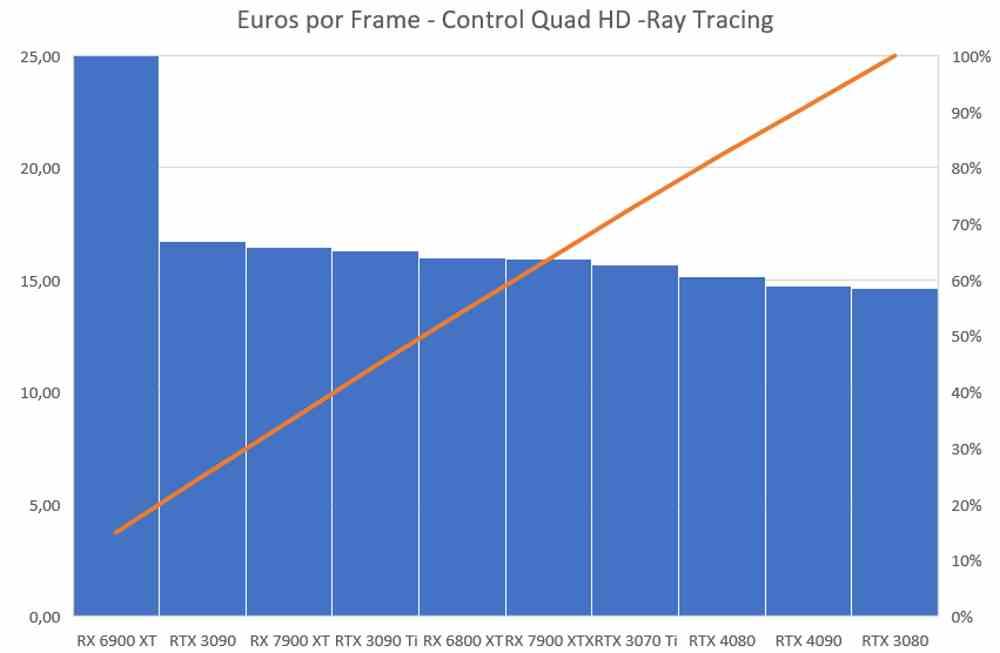 However, we have found a surprise in the case of measuring euros per frame, although NVIDIA cards perform better in that regard. The price of each frame remains in a similar price segment and leads us to think that AMD, despite not publicly giving importance to Ray Tracing, has priced it according to its performance using ray tracing, but neither they have wanted to devalue their hardware below that of NVIDIA.

For the vast majority of users, Ray Tracing is not necessary, rather its implementation in games is due to justify the new generations of graphics cards under the GeForce RTX brand. Getting to use them without having Ray Tracing active is sacrilege to say the least, especially due to the fact that today it is the only way to justify their high price and choose them over those of your rival. Although as we have already said, for the vast majority of users reaching 60 FPS is more than enough today and opting for a high-end graphics card. Great Samsung gaming monitors with up to 25% discount 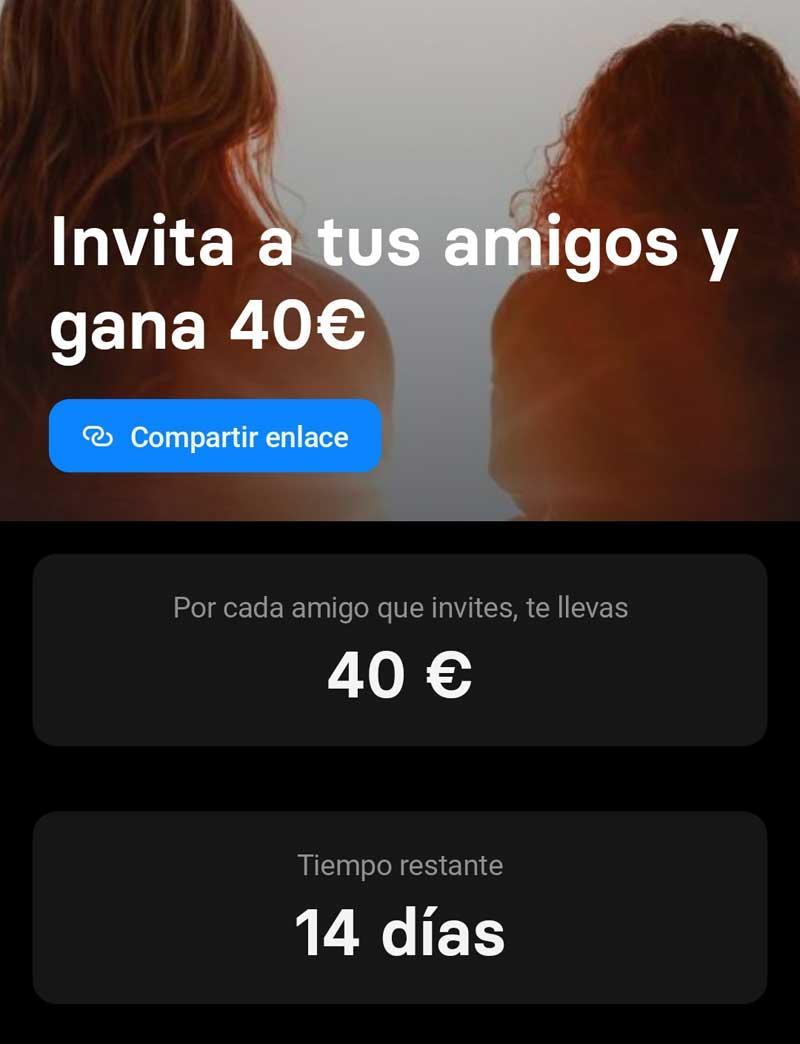 These three online banks give you money for registering: this you have to do 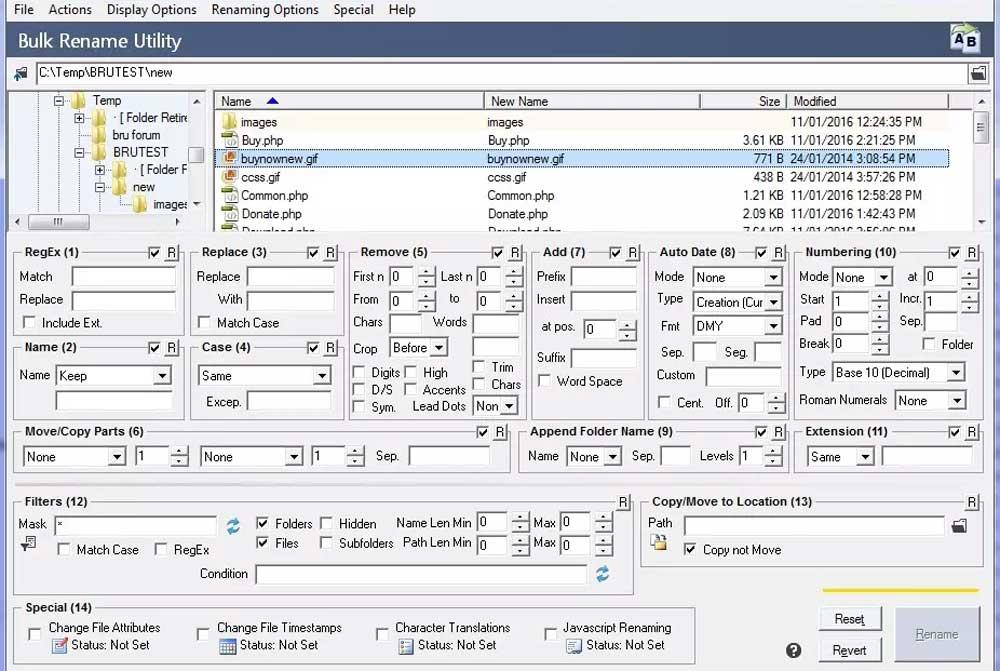 Do you have to rename many files? 4 ways to do it on Windows

Keep your favorites always in order and without duplicates in Edge