One of the most common problems that we can find when we have just installed a graphics card in our PC is simply that it does not output an image to our monitor. It is not a rare occurrence, but when it happens we can think that they have sold us a broken graphics card. However, most of the time they are very small problems and, therefore, have an easy solution that does not require extensive hardware knowledge.

As usual when diagnosing a problem on a computer, we will use the trial and error method until the cause is located. Which means that we are going to carry out a series of checks and, therefore, it will be nothing more than a set-up to verify that not only the graphics card, but also all the elements to which it is connected.

We recommend that you follow the following steps in order to see that everything works correctly, if after following all of them we find that the graphics card causes a black image on the monitor, then it will be clear that it is a factory defect. So you will have to go through the warranty process for a replacement for a functional model or a refund.

Check if the mmonitor is on

It may sound like a truism, but it really isn’t. It is not only check if the power cable is properly connected to the power outlet at one end and to the monitor at the other. It is also check that the monitor turns on correctly. And, if you have several video inputs, make sure that we have selected the one that corresponds to the video cable that we are using to connect the graphics card to the monitor.

It is important that you make sure that the monitor works correctly by using other devices on it. If you make use of a DisplayPort interface you will have it more difficult since there are fewer devices that make use of it. On the other hand, with HDMI it is different and there is a greater variety of devices that you can try. If the monitor turns on then we need to see if the cables are working. 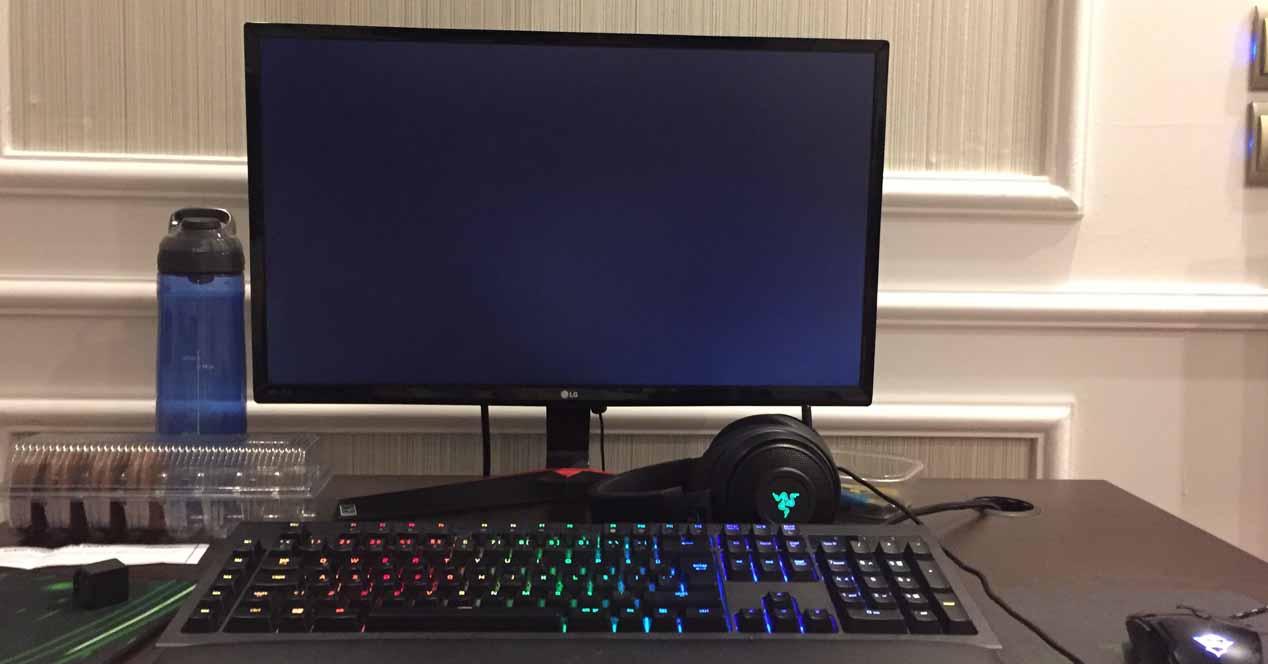 See if he HDMI or DisplayPort cable works

There is one thing that we have always recommended at HardZone, use the cables that come with each device and not others. A personal advice that I give you is that you label the HDMI and DisplayPort cables that you do not use with their base specifications. In this way you will know which cables are the most suitable for a specific monitor or graphics card. If a cable stops working? Discard it completely.

Also another thing that many licensed users consider nonsense, but it is not. You must check that the video cable is securely attached to the graphics card at its corresponding end, and to the correct monitor input on the other. If it is not, it is impossible for the monitor to receive a video image and hence the black screen appears.

In the event that the processor of your PC has a GPU integrated within it, which is different from the one that we will have installed as an expansion card, then the solution is to see if the image is being retransmitted by the graphics hardware that is not . To do this, disconnect the HDMI or DisplayPort cable from the connectors on the graphics card and use those on the graphics card. If you see the image appear, then it’s time to shut down your computer, unplug it, and go to the next step. The graphics card may be inserted in the wrong slot.

Yes the graphics card is not properly inserted into its corresponding PCI Express slot, then the pins will not make contact and, therefore, there will be neither communication nor power for it. So make sure that it is well placed in its slot. Of course, do not do it roughly, but do it carefully, since you do not gain anything by getting nervous. We have all at some point misplaced a component or tightened a wrong screw when assembling something.

Of course, and although it seems that they have nothing to do with it, during the disassembly and subsequent assembly of the graphics card, it is possible that the RAM memory moves in its slots, although it seems to us that it has not. Therefore, we will not have to ensure that the computer’s RAM memory is well placed in case in the process and we have inadvertently disconnected it. If after this the black screen still appears, then we only have the last point left. Let’s not forget that the graphics card is the component that consumes the most energy and when buying one, the manufacturer will tell us what is the electrical power that we need in our PC to use it. Our advice? Make use of one of a higher level than the one requested by the specifications and with the greatest possible efficiency. That is, if they ask you for a 750 W one and you have an 850 W one within reach, go for the second one.

Coming to buy a new graphics card without considering the power that the power supply can supply is a bad idea. Given the if you have mounted a graphics card that requires much more power than it is capable of supplying the source, it is most likely that the computer shows a black screen, as a result of not being able to boot. In this case, you should buy a new power supply with more power. Which is easy if you have assembled the PC yourself.

The problem of clone or pre-assembled computers

One of the most common problems that computers that are sold already built usually have are their lousy power supplies, which are almost never specified in the characteristics when we buy a PC and are usually the limiting factor when installing a graphics card. and not only because of the space, but this has to do with the last point of the checks.

It has happened to many people that they have bought a ready-made computer with a very spectacular design, where to achieve that beautiful aesthetic design the manufacturer has had to sacrifice space and has ended up placing not only a lower power source, but also that this it will have a shape that will be different from the standard and we will not be able to replace it with another of greater power. That is why we recommend you always choose standard designs. The tower of all life may seem boring, but it meets the standards and allows us to tinker with it and even change its power supply if necessary. PowerShell and Linux getting into the Matrix? This is how they have wreaked havoc on GitHub

These are the technologies that will move future Intel CPUs