Monthly updates will be up to 40% smaller

Over time, Windows 10 updates they have grown a lot. This is because all patches are “cumulative”. That is, in addition to the new corrections, each of the patches includes all the previous corrections so that all PCs are always up to date, in safety and quality, even if they have not installed a past patch.

5. Windows 11 will receive cumulative monthly security updates that are up to 40% smaller in size than Windows 10 cumulative updates.

Initially, the upgrade plans remain the same as always. That is, Microsoft will release a security update on the second Tuesday of each month, and a quality update at the end of the month. The security patchesIn addition to being mandatory, they will include the latest quality, cumulative patches to bring the PC up to date and correct errors.

Additionally, Windows 11 will only receive one feature update per year. These are the big updates that come packed with changes, news, and new features. And, we remember, each of the versions of Windows 11 will have 24 months of support, instead of the 18 months that we now have with Windows 10.

We can know how long it takes Windows 11 to update

In addition to being able to see how long the PC will be inoperative within Windows Update, Microsoft will also show it to us in the menu of the button to turn off the PC. In a similar way to how we can do in Windows 10, from this menu we can choose if we want to update and turn off or restart, or turn off or restart without installing the updates, which best suits each moment. But within the shutdown options we can see how long it will take. 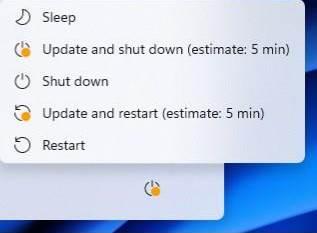 In this way we can choose, or do it right now (if we are not going to need the PC at that time), or postpone it until another time.

If you are Office Insider, this week you can test its new interface