After the Christmas break, Windows 11 continues its development on time. The new Microsoft operating system continues to receive, little by little, its necessary updates, adding new functions and features and, most importantly, correcting many of the bugs present in the operating system that can make it impossible to use the computer normally. Thus, as part of this development, Microsoft has just released a new update to its operating system, the build 22533. And then we will see what it brings.

This new update to the operating system comes with quite a few changes, both for the better and for the worse. On the one hand, Microsoft has rolled back some changes implemented in previous builds due to a malfunction with them, in addition to introducing even more cosmetic changes to the system. It has a very large list of corrections (and errors pending to be solved), and, in addition, it comes to us in ISO format so that we can test it without the need for formatting.

The first thing we will find in this build is that the new implementation of the weather widget on the taskbar, introduced in build 22518, has been restored. Although Microsoft will reactivate it later, for now it advises that some Insider users who have already activated it will be able to see how this function has been deactivated after updating. You still have work to do before you can stay in the system.

In addition, this new build releases a new design for the floating hardware indicators. Thus, when we adjust the brightness, the volume, the privacy of the camera, the on / off of the camera and the airplane mode we will see a new floating indicator, centered next to the taskbar, and that respects the theme of the operating system.

The Windows 11 “Your Phone” app has also received its share of changes. Now, this app shows us a new window for voice calls from this application, with new icons, a new font and other aesthetic changes to adapt it much more to the appearance of Windows 11. 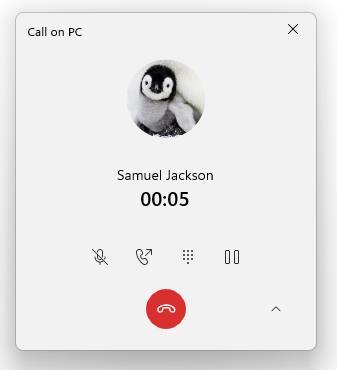 Other interesting news that we can find in this new build are:

Of course, this new build also brings a long list of bug fixes and bugs. Let’s see all of them.

These errors, initially, have only been fixed in this build 22533. However, Microsoft reserves the right to bring some of the fixes to the stable version of the operating system through a cumulative update.

In addition to the bugs fixed, Microsoft has updated the list of known bugs, and pending fixes, in its operating system:

As always, this new build 22533 is now available to Insider users (within the Dev branch) from Windows Update. To install it, we just have to look for new updates in this section of Windows, download it and wait for it to install itself on the PC. After several minutes, and several restarts, we will be able to have our PC up to date, with this new compilation installed, and with all the news that Microsoft has prepared for us.

Improve your screenshots in Windows using a program

Can’t use Windows Desktop, has it frozen? We help you

Take your monitor everywhere with this offer on the ASUS XG17AHP