An enthusiast has managed to run Windows 11 on a Pentium 4, a single-core processor that was released in 2006 and should not be compatible with this operating system according to Microsoft itself, although the official testing tool accept it without problems. Windows 11 requirements… But what requirements?

The increase in the minimum hardware requirements for Windows 11 caused talk from minute one. And what we have left. Although Microsoft said it would be “inflexible” in requiring them, it has ended up relaxing them completely to the point of self-hacking and as we said from day one Windows 11 can be installed on any PC today … and past. Between us: the management of this issue has been chaotic.

We (and anyone who gets into it) have been able to install Windows 11 on unsupported older machines. But we have not reached the extreme of the case at hand, in a machine with the following components:

The most curious thing about it is that the official Microsoft tool for hardware testing (PC Health Check) marks as compatible a processor with 15 years behind it and with a single core, which does not meet the minimum requirements set by the company that speak of a CPU with 2 or more cores. 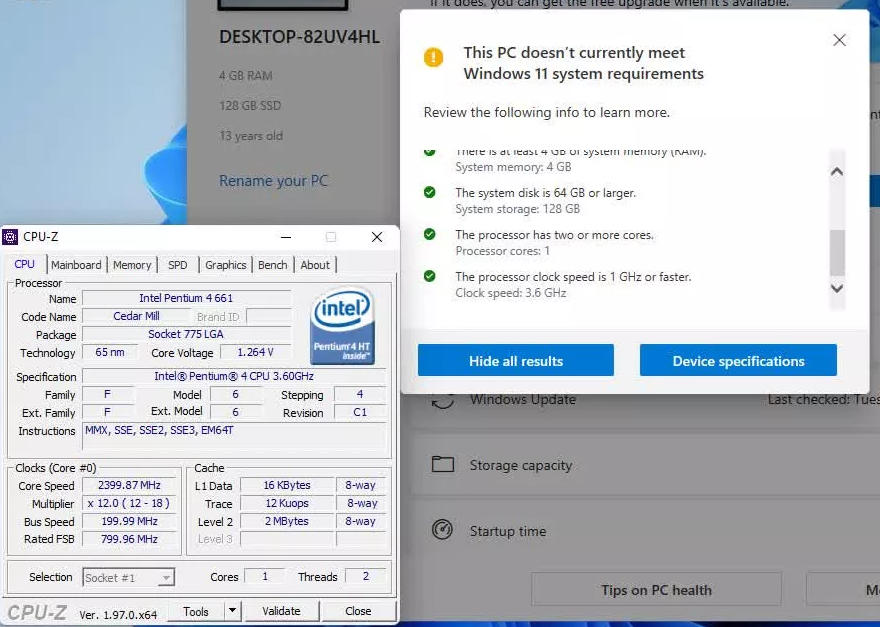 Incomprehensible considering that Microsoft has left out of the list of compatible processors a lot of much more modern and high-performance models to run the system. Take for example a Core i7-7700K and some AMD Ryzen models. Of course this Pentium 4 does not pass the TPM requirements or secure boot, but it is the same, the machine runs Windows 11 through a Windows PE installation under a legacy partition system such as MBR.

For more inri, Windows 11 not only installs and works on this type of machine, but the enthusiast who has installed it claims to have the system updated with the latest security patch, another question that Microsoft has failed to comply with on the initial announcements and that leave in limbo the justifications that were given to impose these requirements: «improve equipment safety«.

For us to stop talking about this issue once, it is best that Microsoft open the tap completely to any machine capable of running Windows 11. Of course, in that case, it would have to support them in the same way as it does with machines. compatible. Or that it eliminated some requirements, systematically breached.

What should a smartphone be made of? Plastic vs. metal, ceramic and glass

The best video games to play sports and get fit