What is the ASUS Samba server for?

Samba is a protocol of files shared on local network and it is multiplatform, this protocol is compatible with all operating systems such as Windows, Linux, MacOS or Unix in general, so we can access shared resources easily and quickly by just authenticating on the Samba server. This protocol has gone through different versions such as SMBv1, SMBv2 and also the latest SMBv3 that incorporates improvements in security and authentication of different users to access shared resources.

Thanks to the Samba server built into all ASUS firmwares, as long as the router has a USB port, we can access files and folders on an external hard drive or a USB stick. We will be able to download or upload files and folders through the local network, just by entering the IP address of the main router or the domain of the router itself. The manufacturer ASUS has several interesting options, such as accessing the Samba server in guest mode, without any type of authentication, we also have the possibility to customize the name of the device and define the workgroup.

The Asuswrt firmware has by default the “admin” user with read and write permissions on the entire storage device that we have connected to the USB port, however, we have the possibility of creating different users with different permissions. For example, we could create a user for each person who is going to connect to the router, and define that we want read or write permissions in certain folders, and in others that do not directly have any type of access. ASUS allows us a total of three permissions for all the folders that the storage device has:

Do you have an SME and you need to share files on a network?

ASUS routers with this Samba server feature are ideal for small and medium business environments that need basic file and folder sharing. If you have an office and you need to permanently have a Samba server to read and write files in the folders of an external hard drive, these types of solutions are ideal because energy consumption is minimal and it will always be available. Generally, in small offices, the Windows file sharing system is used on a certain PC, unfortunately, if we turn off the computer that acts as a server, the rest of the computers that were connected will lose the connection.

Thanks to the possibility of creating different users with different permissions, we can make certain workers access only their shared folders to work, and leave the rest of the folders in read-only mode or directly without access. This will allow us to limit access to all the information contained in the ASUS router’s Samba server.

Once we know what it can do to configure the Samba server, we are going to explain how to configure it to access it.

We are going to divide the configuration of the Samba server into three distinct parts. In the first part we will see the options regarding the information and format of the storage unit that we have introduced in the USB port. In the second part we will see the configuration options of the Samba server. Finally, we will show you how to access shared folders via Samba with the Windows operating system.

The first thing we have to do to configure the Samba server is to insert a hard disk or a pendrive into the USB 2.0 or USB 3.0 port of the ASUS router. If we click on the USB area we can see the information of the connected device, the available space, the total space and a direct access to the multimedia server, AiDisk and we also have the possibility of safely removing the disk, in addition, we can configure the USB port 3.0 as an optional USB 2.0 port, although its performance will decrease to about 40MB / s read and write maximum.

ASUS will also allow us to perform a scan of the disk or removable storage unit in case there is some kind of failure that it could fix, this is basically running the typical Windows “chkdsk” to detect errors in the disk sectors.

In the section of “Format»Is where we can format the hard drive or pendrive in different formats, such as NTFS, FAT or HFS. If you are going to use the storage to copy very large files (more than 4GB) and we use mostly Windows operating systems, our recommendation is that you use the NTFS file system. Along with the type of format, we can also configure the disk label to give it a name. 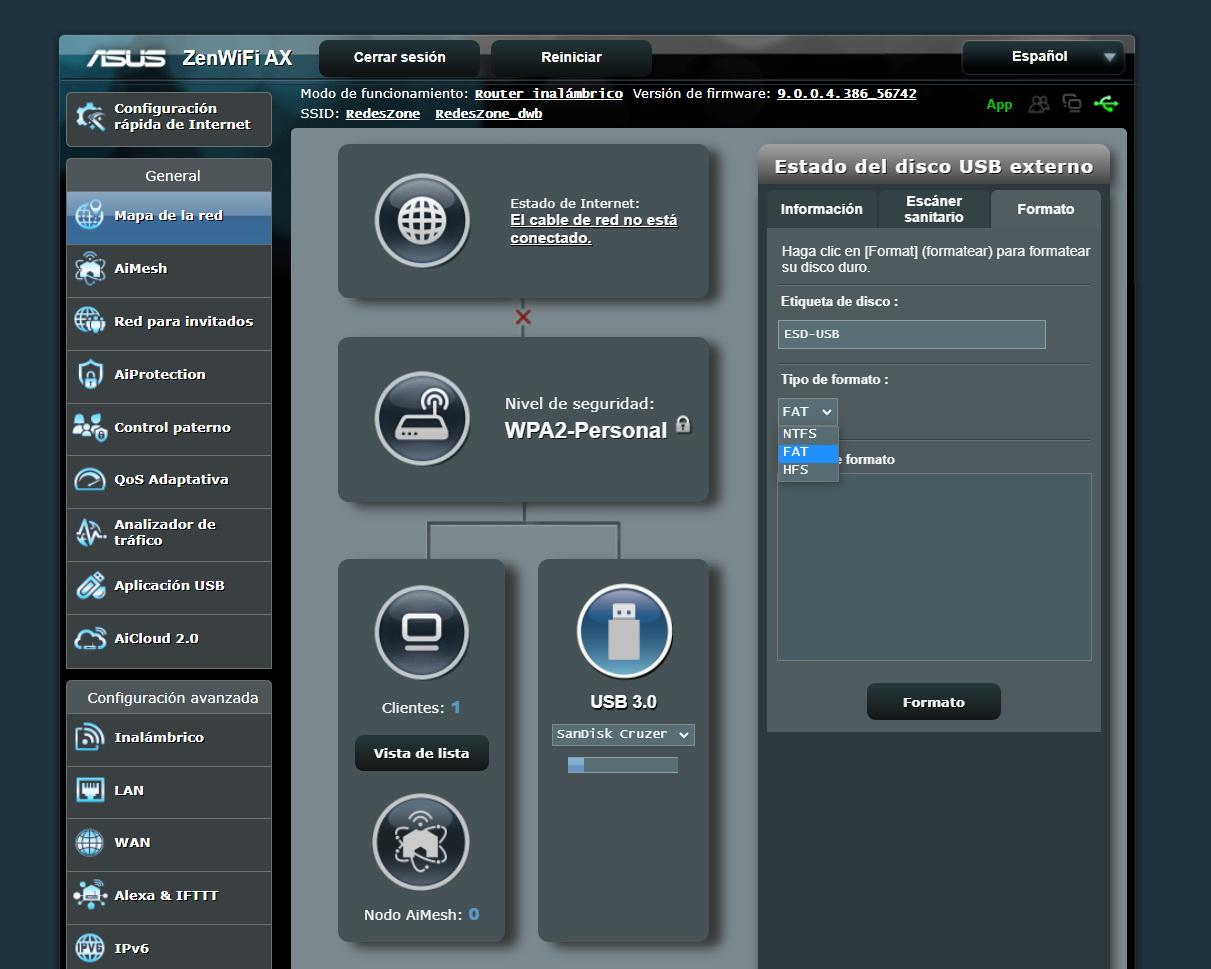 Once we have the album ready, we are going to go to the «General / USB Application«, In this menu we click on«Server Center»Where the ASUS router’s Samba server will be located. 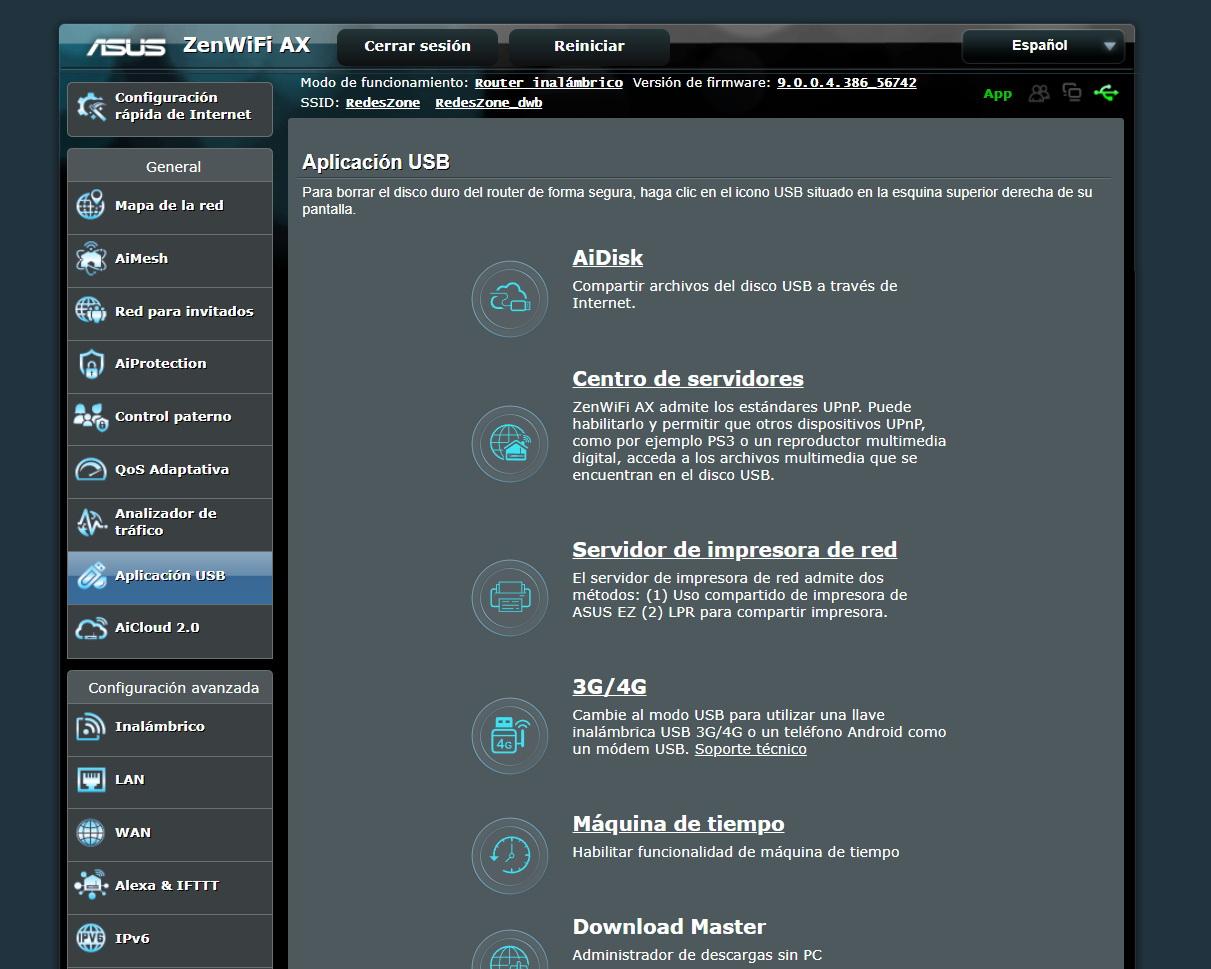 In the “Server Center” menu we have three services, the DLNA multimedia server, the Samba server and also the FTP / FTPES server of the ASUS router. In this tutorial we are going to see all the configuration options regarding the Samba server.

The first thing we must indicate is that, by default, the Samba server is enabled to start sharing files easily. The configuration options that we have available are:

At the bottom is where we can configure the different users with their passwords and also the user permissions in the different folders that we have in the storage unit. 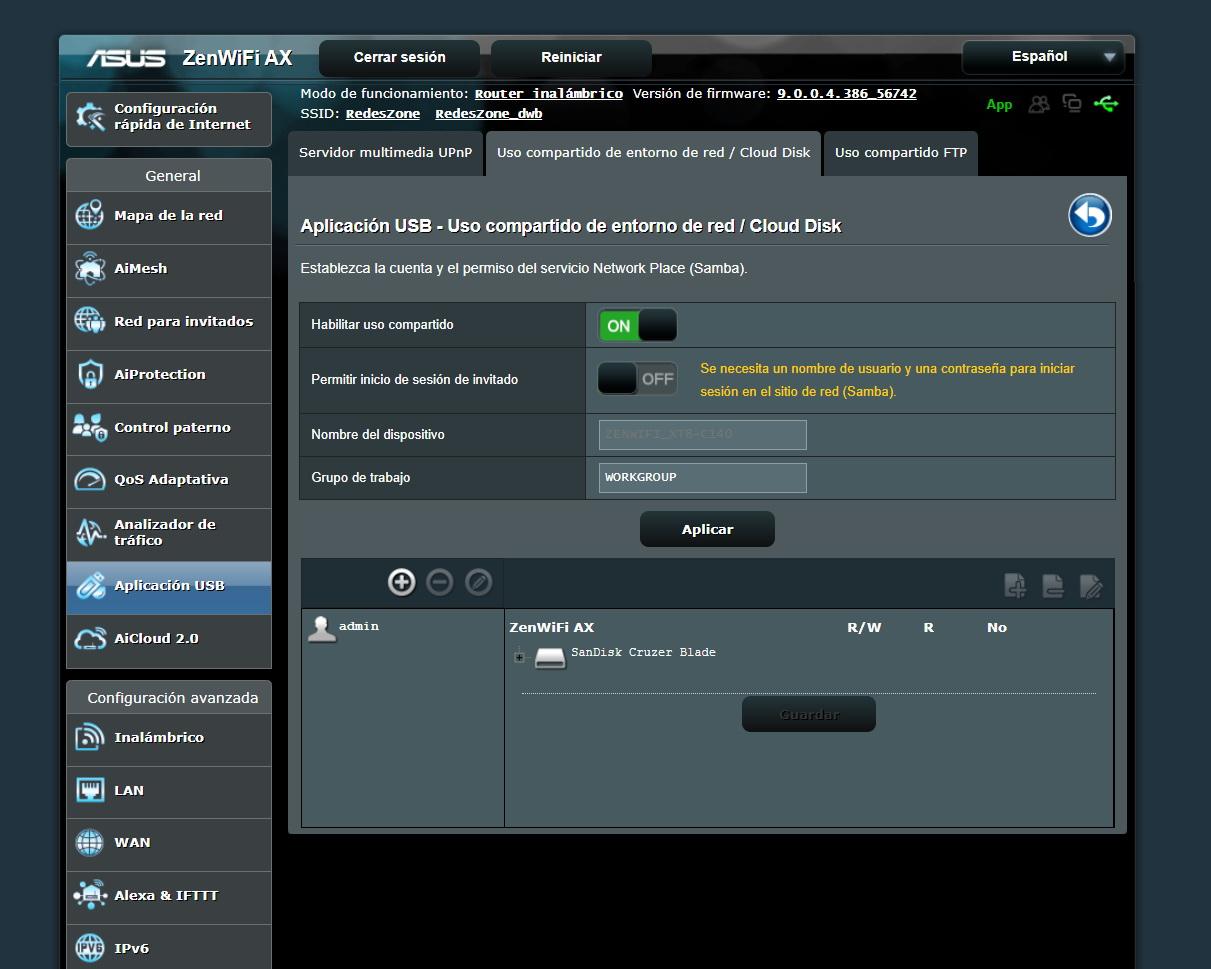 If we enter the inserted disk, we can see the folders inside it, in fact, the ASUS firmware will allow us to create new folders by clicking on the upper right button with the “+” icon. 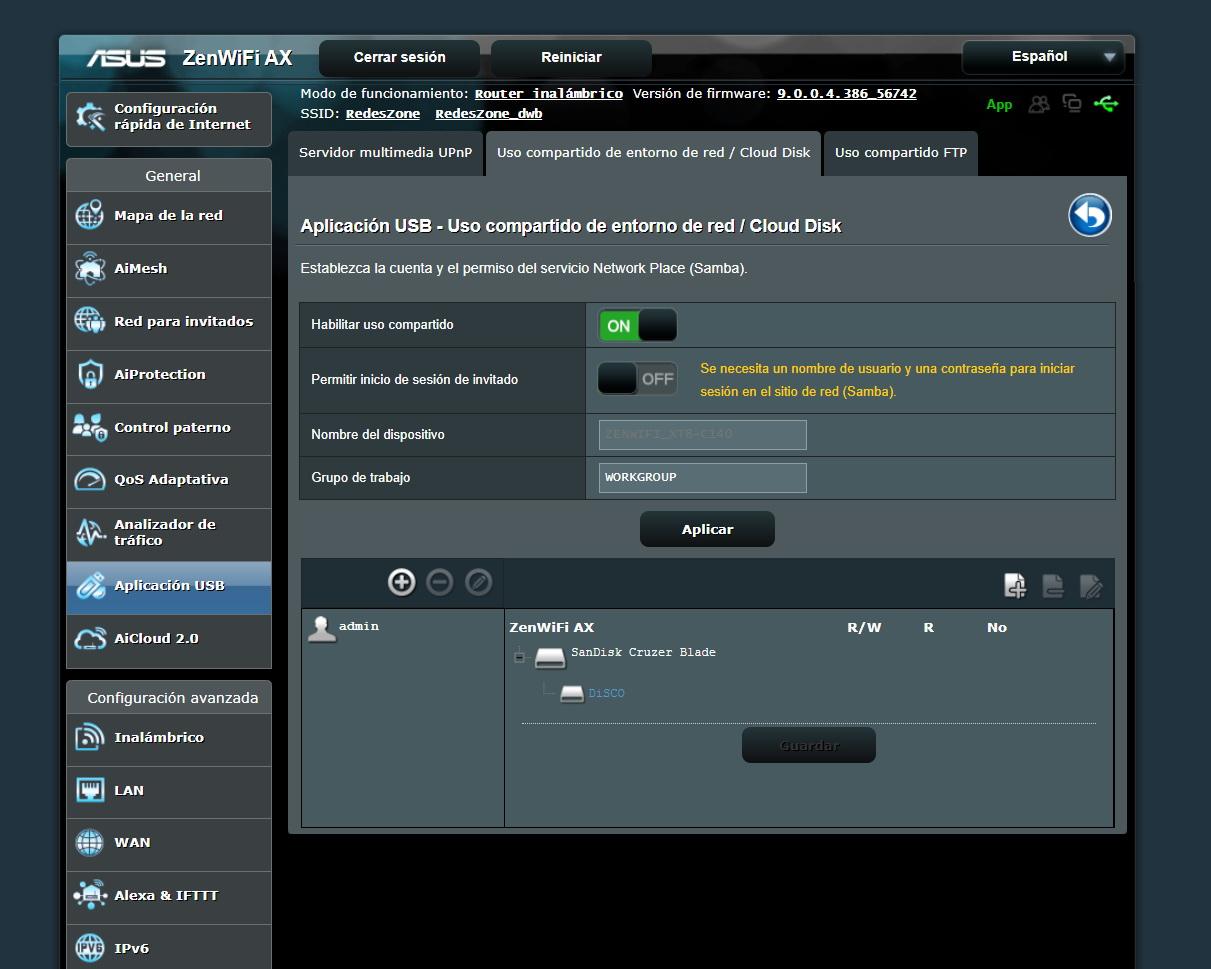 If we want to create a new folder, we will only have to set the name of the new folder and click on «ADD«. We can create all the folders that we want to later assign them their corresponding user credentials. 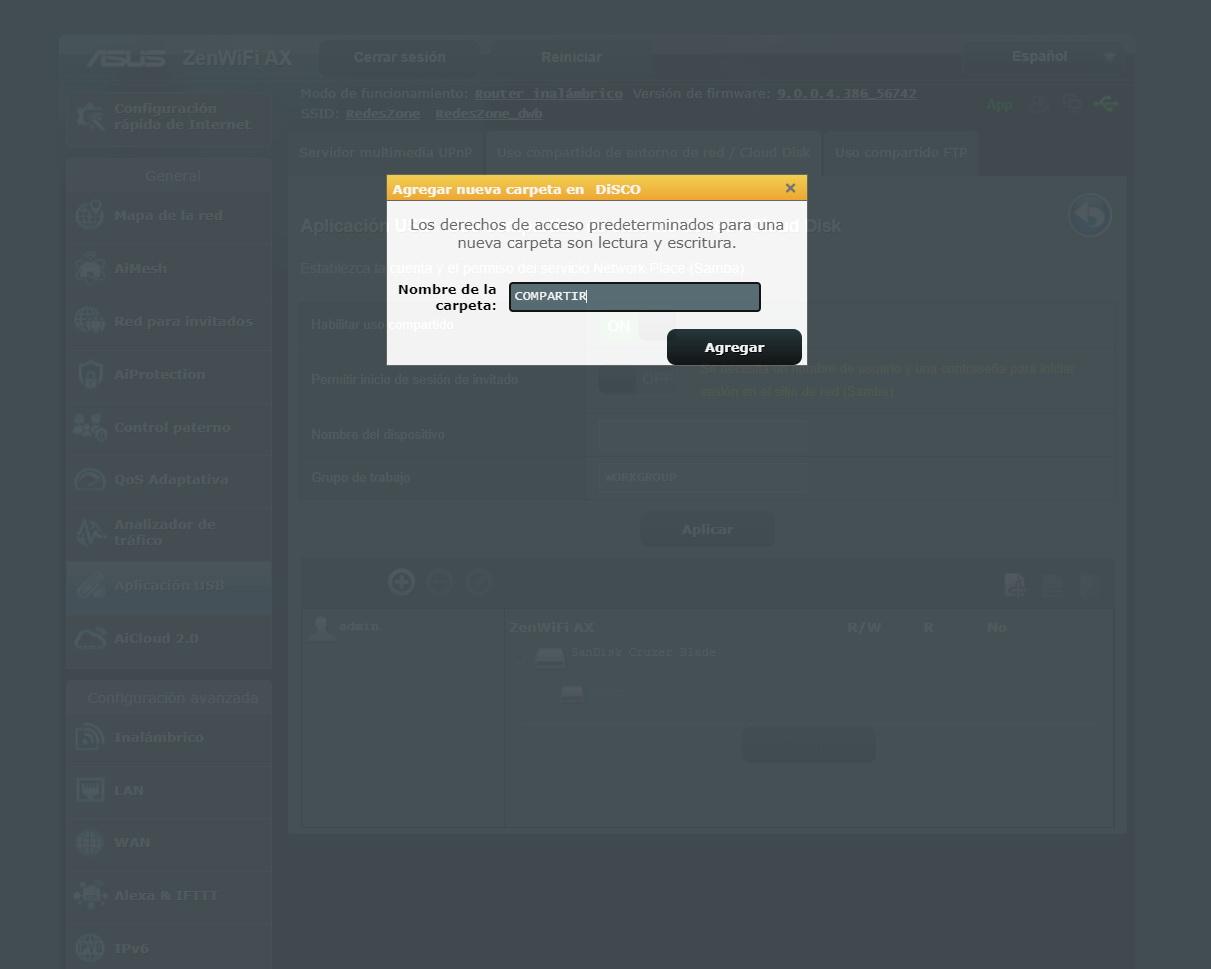 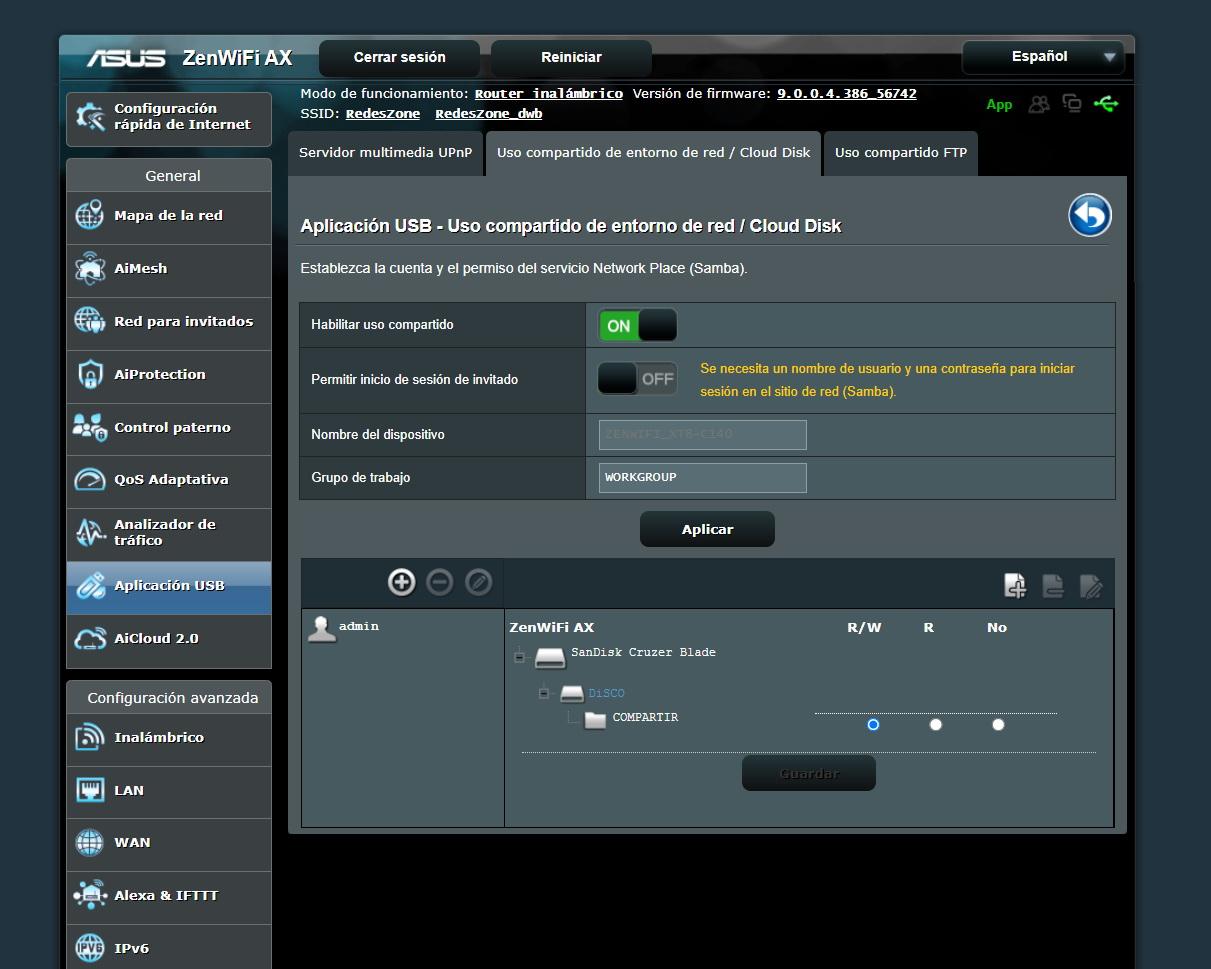 If we want to create a new user, just click on the “+” button that is just above the admin user. To create a new user we will simply have to enter the username and access password. Once we have confirmed the entered password, click on “Add” and we will have it. 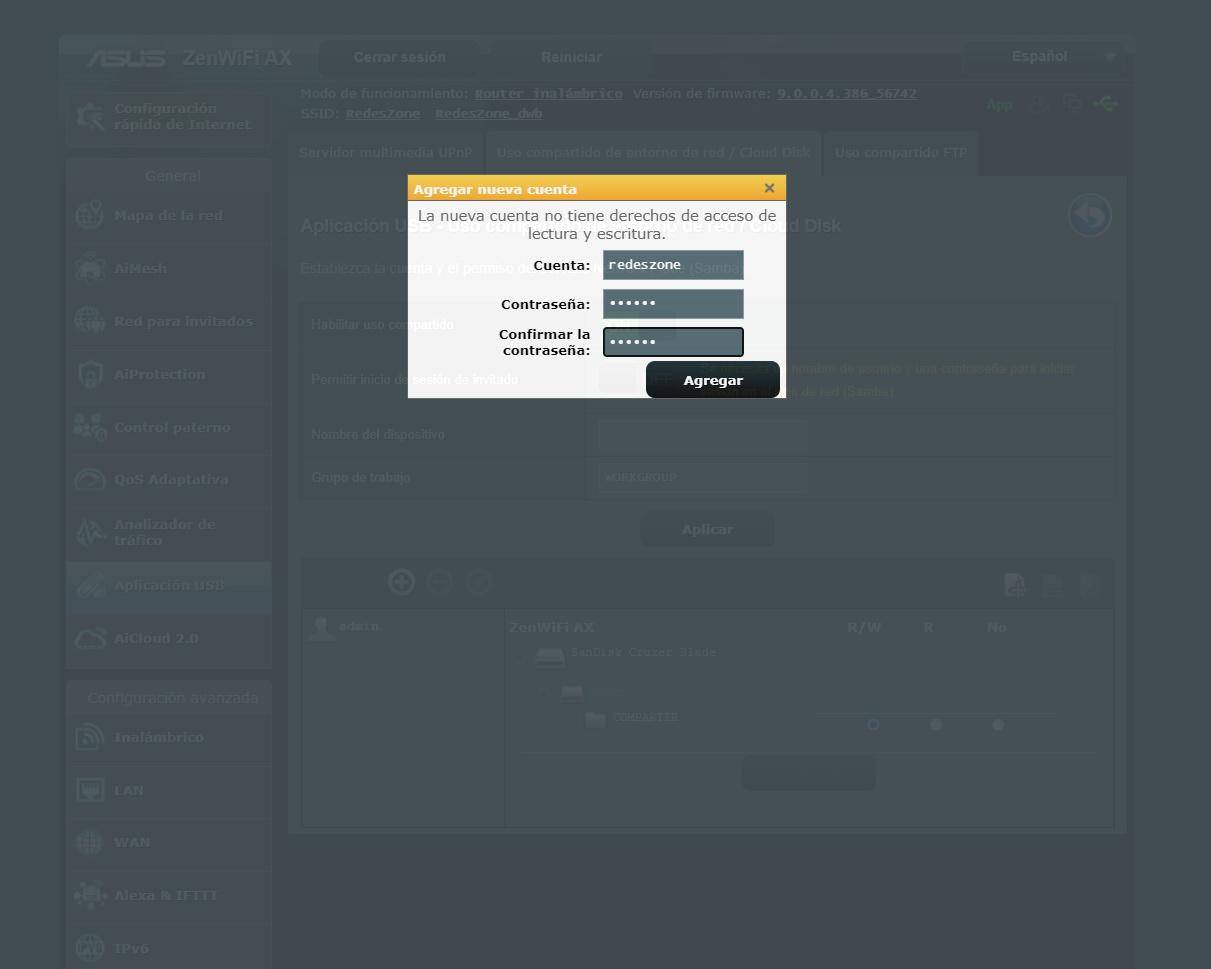 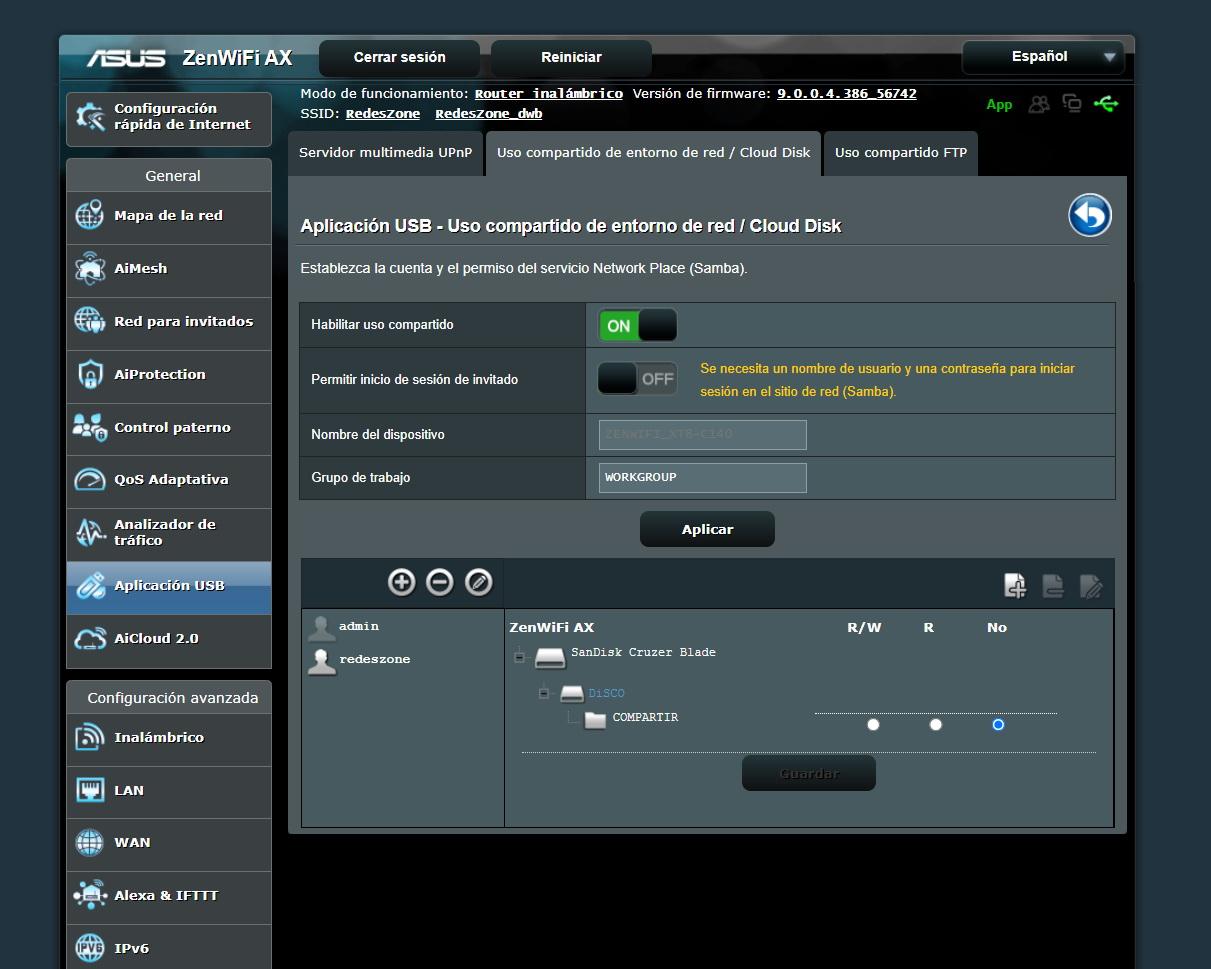 Once we have configured the Samba server, we are going to connect to it with a Windows PC.

Connecting to the router’s Samba server

Windows allows us several ways to connect to the ASUS router via local network. The first thing is that we can go to “My computer” and in the “Network” section the ASUS router will automatically appear to access. Another very easy way to access it is to click on “Start”, search for “Run” and then enter the following: IP_router. In our case we have set 192.168.50.1 to directly access the ASUS router via Samba, although we could also do it with the router.asus.com domain, which is the usual one in the manufacturer’s computers. 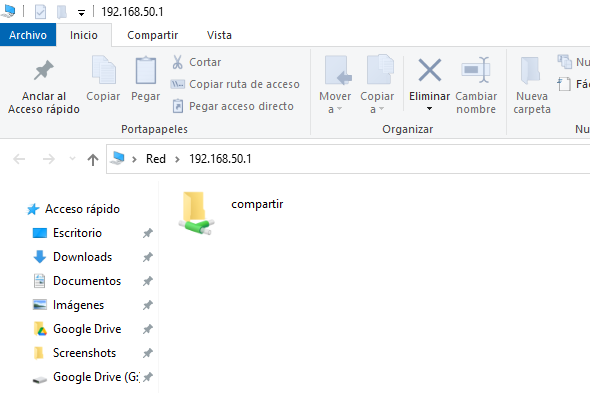 When entering the credentials, we will be able to enter the folder and we will have the permissions that we have given previously. 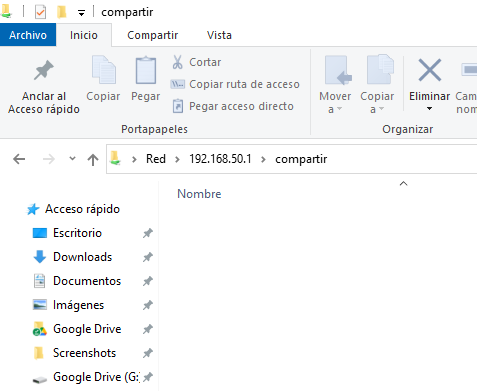 As you have seen, configuring the Samba server on ASUS routers is quite simple, this will allow us to share files and folders in the home local network, but also in SMB environments where we have to share files for work. We must remember that this Samba server will always be running as long as the router is available, so we do not have to have a dedicated computer exclusively to share folders.

Scan for malware with these online services