This Wi-Fi Mesh system has all the news of Wi-Fi 6E and from earlier Wi-Fi 6, such as Beamforming, MU-MIMO, OFDMA, TWT, and even Agile Multiband Wi-Fi. The Asuswrt firmware will allow us to configure WPA3-Personal in all frequency bands, but in the new 6GHz band its use is mandatory, we have two possibilities: we use OWE to have no authentication but data encryption or we use WPA3-Personal. In this new 6GHz band we do not have the possibility to use WPA2-Personal or any other configuration.

Asuswrt firmware and the new AiMesh 2.0 will allow us interconnect all compatible equipment without problems, however, if we only have two ET12 the interconnection network is configured by default in the new 6GHz band, in this way, we will have the best speed and coverage in the trunk network, so that the devices wired and connected to the Wi-Fi in 2.4GHz and 5GHz have the maximum possible speed. This ET12 model would be the ideal companion for the ASUS ROG Rapture GT-AXE11000, since we could use the ROG router as the main equipment and these new ET12 as high-performance extenders, ideal for having the fastest Mesh network in the world at home.

At the level of wired connectivity, this new Wi-Fi mesh system is exactly the same as the XT12 that we have seen previously in RedesZone. The ports available on this computer are as follows: 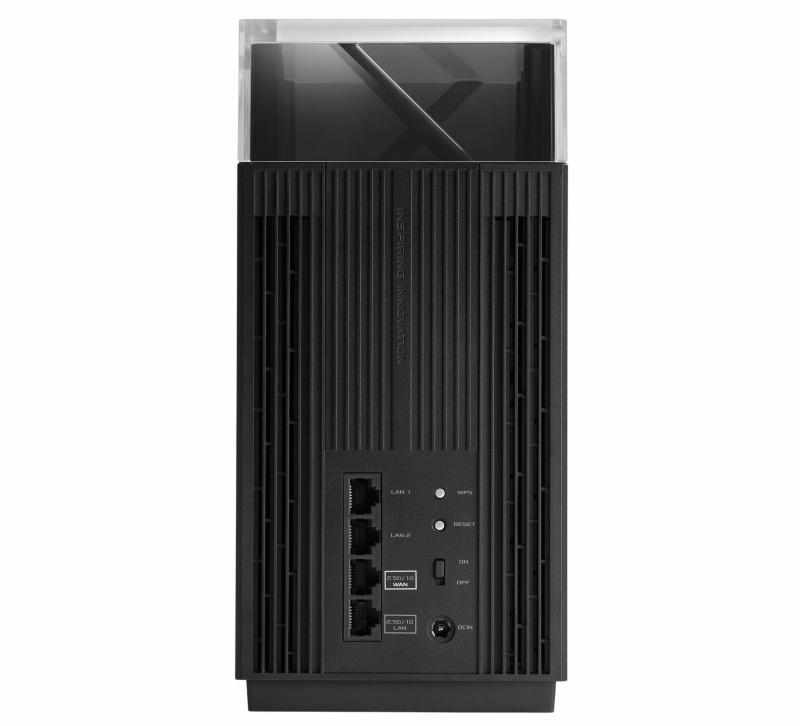 In this case, we also do not have a USB 3.0 or USB 2.0 port. The Asuswrt firmware has the main configurations of always such as Jumbo Frames at 9K and Link Aggregation with LACP using the LAN1 and LAN2 ports.

What we like most about this model (and also about the XT12) is the incorporation of the dual 2.5G Multigigabit port, both for the WAN and the LAN, ideal for getting the most out of the wired network.

This Wi-Fi Mesh system has all the usual features. The most remarkable thing is that we have the ASUS AiMesh 2.0 with all the management options and centralized administration of the Mesh network, from here we can configure which trunk links we want to make (via cable or via WiFi) as well as select the frequency bands and their priority. . Of course, the firmware also allows us to choose which backhaul link we want. In the Smart Connect section we can choose between having simultaneous dual band with band-steering (2.4GHz and 5GHz) to use the 6GHz band as a trunk, or if we want to use the three frequency bands for wireless clients.

The rest of the Asuswrt options such as the guest WiFi network, AiProtection Pro, adaptive QoS, VPN servers, the possibility of configuring the firewall, compatibility with the IPv6 protocol and many more options are also present in this advanced model from the manufacturer ASUS. In the aspect of the firmware nothing has changed.

Of course, this new model is really easy to configure, we simply have to configure one of them as a Mesh router and automatically the mesh node will be added to the Mesh network and will start working together. There is no need for manual configuration, everything is done completely automatically.

Next, you can see the complete video of the unboxing and first impressions of this high-performance WiFi Mesh system, although this video could perfectly be the previous one of the XT12 only changing the 5GHz-2 band for the new 6GHz band.

Soon in RedesZone we are going to offer you a complete analysis, we will check the real performance in the wired LAN-LAN and LAN-WAN tests with the different 1G and 2.5G Multigigabit ports, as well as Wi-Fi 6E with the new 6GHz band, but we anticipate that the speed is absolutely spectacular.

Check if your passwords have been leaked with HIBP Offline Check

WISP: what is it and why is it so important in today’s connections?

This is how they can steal your Netflix account, but you can avoid it