The popular manufacturer of NAS servers QNAP, has presented new high-performance QM2 expansion cards, with the aim of accelerating the overall performance of a NAS server, although it is also compatible with any PC. These new expansion cards make use of the latest PCIe 4.0 standard, so we will have a great bandwidth to squeeze the most out of the hardware. Do you want to know the main characteristics of these new QM2 cards?

The manufacturer QNAP has presented a total of three QM2 cards to expand the possibilities of your NAS server, depending on your needs and budget, you can choose one QM2 card or another. Next, we are going to explain in detail the main characteristics of each card.

This new expansion card is the top of the manufacturer’s range, it has a PCIe 4.0 x8 interface with a Marvell AQC113C controller. This model has a total of 2 NVMe SSD slots (PCIe 4.0 x4) of M.2 2280 size, so we can use the most powerful NVMe SSD units that support the PCIe 4.0 standard, in this way, we will have a reading and writing speed higher than 6000MB / s without many problems . In this new model, the SSD units can be installed without the need for any tool, in addition, not only can it be used for very high-speed SSD cache, but it can also be used as a storage pool and even for Qtier (automatic organization by levels ).

This model also has a total of two 10GBASE-T Multigigabit portsThis means that we can transfer data at a speed of up to 20Gbps Full Duplex if we use Link Aggregation. A very important detail is that this card supports Jumbo Frames at 9K to maximize performance, making it ideal for environments where we have a NAS server that needs to provide the best reading and writing speed on the local network.

In the QNAP official website You can find all the details of this new model.

This new card from the manufacturer is almost the same as the previous one, this model also has a PCIe 4.0 x8 interface with a Marvell AQC113C controller, the 2 NVMe SSD slots (PCIe 4.0 x4) of M.2 2280 size, but it does not have 2 10GBASE-T Multigigabit ports, but only has a single port. 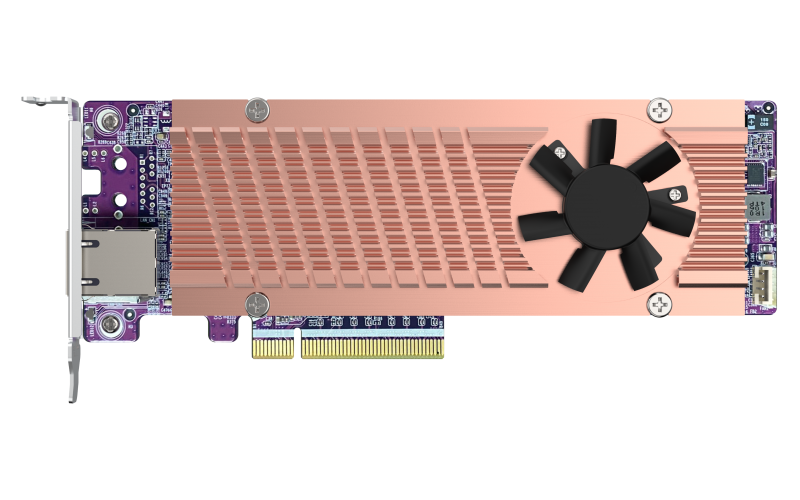 This model differs from the previous one by having a single port at 10Gbps Full Duplex Instead of two, of course, it does support 9K Jumbo Frames. The internal scheme of this model is as follows:

This model is ideal for environments where having 10Gbps connectivity is enough for the tasks to be carried out, however, this expansion card can be used in addition to any 10G or 25G network card that we have installed in the NAS server.

This new expansion card has PCIe 3.0 x8 interface with a Marvell AQC113C controller, unlike previous models that used the PCIe 4.0 standard as we have explained. This model has 2 NVMe SSD slots (PCIe 3.0 x4) of M.2 2280 size, in this case we can use very fast NVMe SSDs, but we cannot exceed 6000MB / s approximately. Of course we can use SSD drives as SSD cache, storage pool, and also with Qtier for tiered storage.

This model has one 10GBASE-T Multigigabit portso it is ideal for adding 10G connectivity to our super high performance NAS server, of course it supports 9K Jumbo Frames seamlessly and the compatibility with QTS and QuTS hero operating system is perfect. We must also indicate that this model is compatible with PC, so it could be a good option to add ultra-fast connectivity and SSD storage via PCIe 3.0 to your computer.

Can ransomware affect my cloud backup?

How to install extensions safely and avoid problems