Consumer spending on games for mobile devices has exploded over the last half decade, leaving other platforms such as the PC or consoles in the lurch, and according to the new report published today it seems that the situation is not going to change in the future. what remains of the year. It’s not that the gaming industry for console or PC is going to disappear, but it does seem like a clear indication that mobile games are, in a way, preventing the gaming industry for PC and other platforms from stagnating.

Mobile games leave consoles and PC in the lurch

In the graph that we have captured above, prepared by Major Device Group, we can see the trend of spending on games for the different platforms where it is quite obvious that since 2014 mobile games are the ones that generate the most income and what is more, they are They have taken off notably from the rest of platforms to reach 120,000 million dollars during this year 2021 for just 41,000 million in the PC industry and 39,000 million in that of consoles. The industry of games for portable consoles, which at the moment is dominated solely by the Nintendo Switch, generates just 4,000 million.

It is clear that the growth of the mobile games industry has been booming since 2014, and the trend is for it to continue to grow to the detriment of other platforms. In addition, the report highlights that most of this income is not for the purchase of games but for the microtransactions that are made within them, denoting that the expense of these purchases within the games reaches, eye to the data, the 1,700 million of dollars per week. 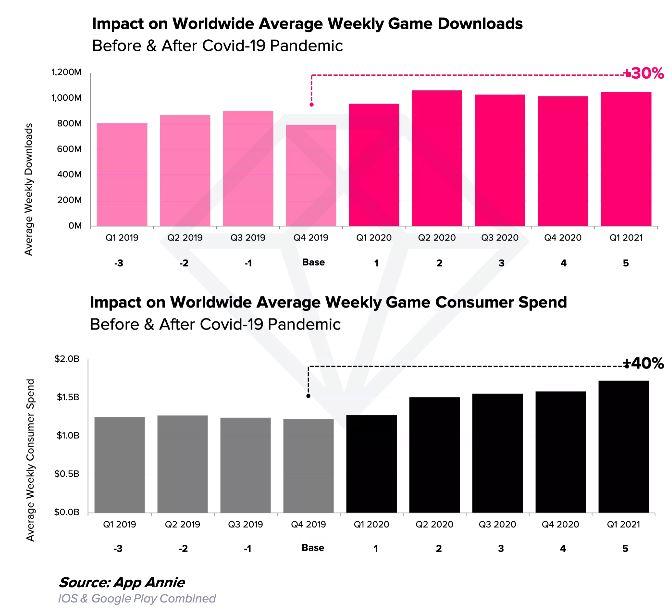 One of the most important conclusions in this regard is that the demand for mobile games has remained strong more than a year after the COVID-19 pandemic broke out. Looking at the data and using the fourth quarter of 2019 as a base, we see that average weekly game downloads increased 30% in the first quarter of 2021, while spending increased by no less than 40% in this period.

We all know that the confinement situation due to the pandemic has caused a notable increase in the expense of devices such as consoles and PCs, but it has also done it in games (after all, people have had to seek leisure and hobbies that they can run inside their homes), and it is clear that the mobile device industry is the one that has taken the upper hand. We have already been seven years of unstoppable growth in this industry and the growth line of spending on PC games and consoles has practically not grown at all since then, so the conclusion is that yes, mobile phones are effectively making the gaming industry PC and console games stagnate (beware, it has caused its growth to stop, but not to slow down, so it is not that bad news either).