Main features of this gaming router

This wireless router is aimed at a gamer audience, it has all the necessary technologies to make the most of online games, ideal for having the best possible user experience. Currently this GS-AX5400 model is the high-end router of the new ROG STRIX family, because there are other routers from the manufacturer ASUS that are superior to this, such as the ASUS ROG Rapture GT-AX11000 or the ASUS RT-AX89X, both analyzed in RedesZone. This new model is ideal for those players who need a very good router, but do not want to spend more than 250 euros on a high-performance router.

Of course, this router has all the technologies of the WiFi 6 standard, such as the following:

Other very important wireless features that this router has, are the incorporation of a WPS (Wi-Fi Protected Setup) button to synchronize devices easily, and we even have the security of the WPA3-Personal protocol, a protocol that allows us to have the best possible wireless security. The Asuswrt firmware will allow us to configure WPA3-Personal with protected administration frames, to have the best possible protection against external attacks.

This wireless router is also compatible with ASUS AiMesh, we can configure it as an AiMesh router or as an AiMesh node, with the aim of expanding the wireless coverage in our home. A very important feature is that, by having AiMesh, we will have WiFi roaming with the main 802.11k / v standards, in addition, we also have band-steering to have a single wireless network and that the router places us in a frequency band or in another.

This router has a Gigabit Ethernet port for the Internet WAN, as is usual in this type of routers. Its Asuswrt firmware has support for VLANs on the Internet WAN, it also supports VLANs per port, and we even have the Movistar FTTH Triple VLAN profile at our disposal. A very interesting option that we also have in this router is that we can use the LAN1 port as Ethernet WAN, in this way, we can use a second WAN as load balancing or connection failover, in addition, we could also do a WAN Aggregation thanks to the firmware. 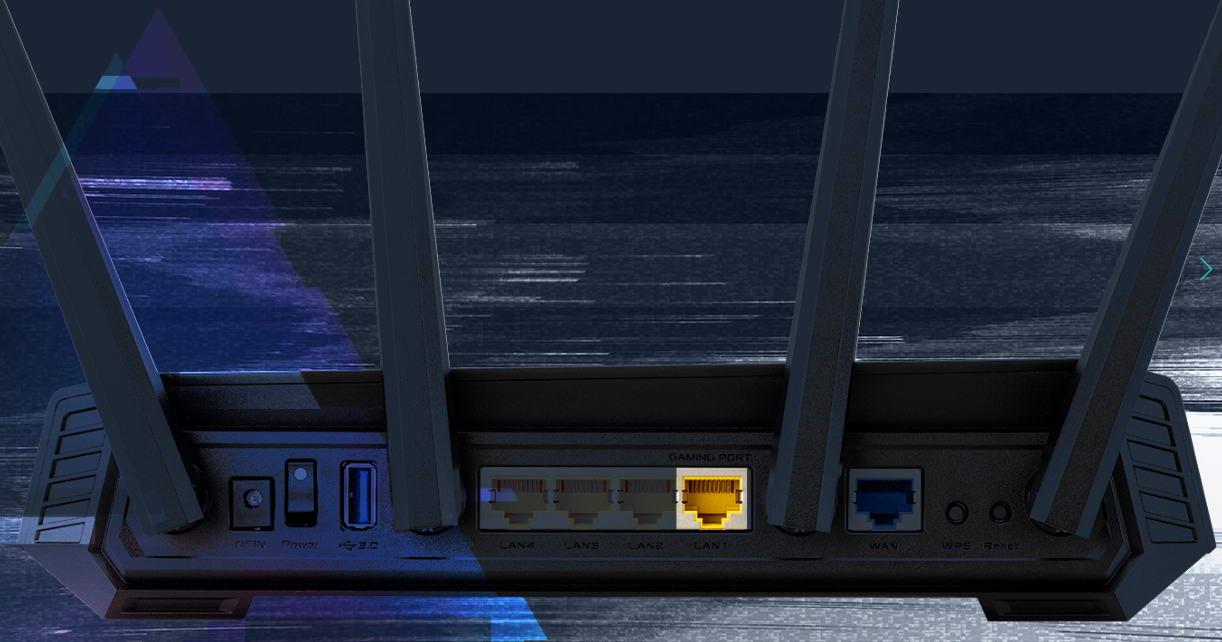 Regarding the local network, we have a total of four Gigabit Ethernet ports for the LAN, the firmware supports Link Aggregation in the LAN1 and LAN2 ports, another very interesting option is that the LAN1 port is the «Gaming port», therefore, it will have the highest priority over the rest of the devices that we connect via cable or WiFi. Thanks to this functionality, we can put our console or gaming PC here and optimize performance to the maximum.

Finally, we have one high-performance USB 3.0 port, Asuswrt firmware has Samba server, FTP, FTPES, DLNA media server and many other services. Thanks to the powerful 1.5GHz Tri-Core processor we can achieve great performance in USB reading and writing.

In this ASUS ROG STRIX GS-AX5400 router we have the same Asuswrt firmware as always, but we have it “tuned” with gaming colors, however, we will have all the usual configurations such as AiMesh configuration, guest WiFi network, AiProtection, adaptive QoS , traffic analyzer, Open NAT technology to open ports easily and quickly, we will also have all the usual USB services including AiCloud 2.0. 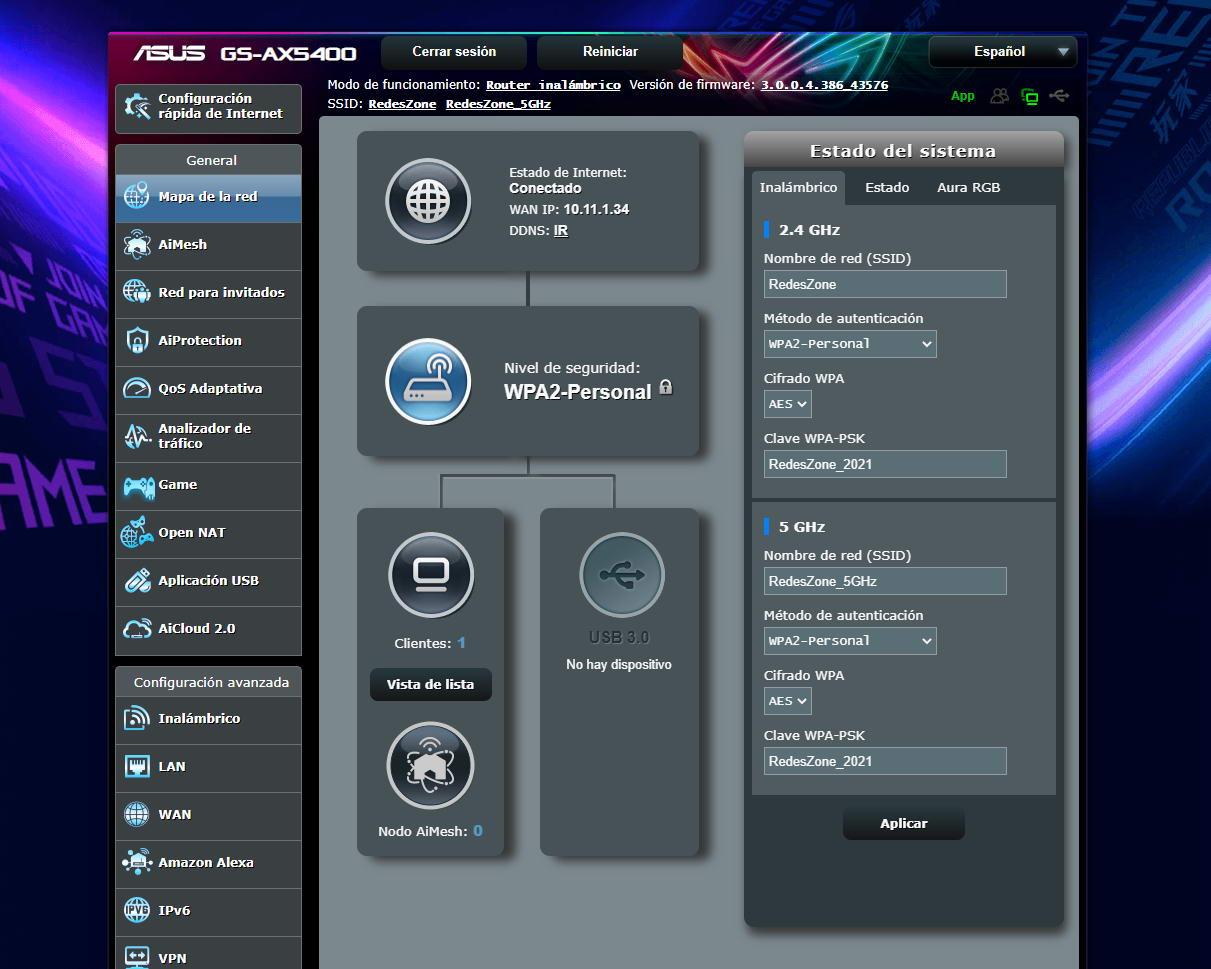 Regarding gaming features, this router has the same options as always:

Once we have seen the main features of this router, we go with the unboxing and first impressions.

In RedesZone we have had the opportunity to test the real performance of this new high-performance router with WiFi 6. The design of this router has pleasantly impressed us, in addition, it has Aura RGB so we can select the color and also the type of lighting the main light of this router, and not only this, but we can synchronize the rest of ASUS devices compatible with Aura RGB so that they work together. This is something ideal to give our room a gaming touch, where all the devices have the same type of lighting and also the same color. The most striking thing about this router is the following:

In the video that we offer below, you will be able to see the unboxing and first impressions of this gaming router that belongs to the new family of ASUS ROG STRIX routers, in addition, you will also be able to see the main technical specifications, the ports available on this equipment, the vents and other aspects.

In the coming weeks in RedesZone we will offer you a complete analysis where you can see the technical characteristics in detail, you can also see the real performance via LAN-LAN, LAN-WAN, via WiFi and even USB 3.0 performance tests, using SMB, FTP and FTPES as file exchange protocols. Of course, you can also see a detailed explanation of all the Asuswrt firmware configuration options, including the gaming options.

This is what cybercriminals are looking for on your devices