Next, we are going to talk about the main features of the security suites that the main manufacturers incorporate.

Different manufacturers use different providers to detect and neutralize different Internet threats, depending on the manufacturer and router models, we will have some features in terms of security or others. We are going to summarize the main security options that various manufacturers have, so that you can later decide which one best suits your needs.

ASUS has the security suite ASUS AiProtection and ASUS AiProtection Pro. The only difference between the two is that the “Pro” version has a bidirectional IPS to scan all incoming and outgoing connections for security threats, this “Pro” version is incorporated by Wi-Fi routers and systems. -Fi Mesh mid-high range. Entry-level computers only have the “normal” AiProtection version, because they do not have enough power in the main processor to scan all network traffic and not affect performance.

In this example we are going to see how the options available with the ASUS RT-AX88U router are, but in all the models of the manufacturer ASUS they are exactly the same. All of the manufacturer’s routers use technology from the cybersecurity company Trend Micro to protect the network. In the “AiProtection” menu we will find the possibility of enabling or disabling the protection, but then we can activate or deactivate the different modules that we have available. 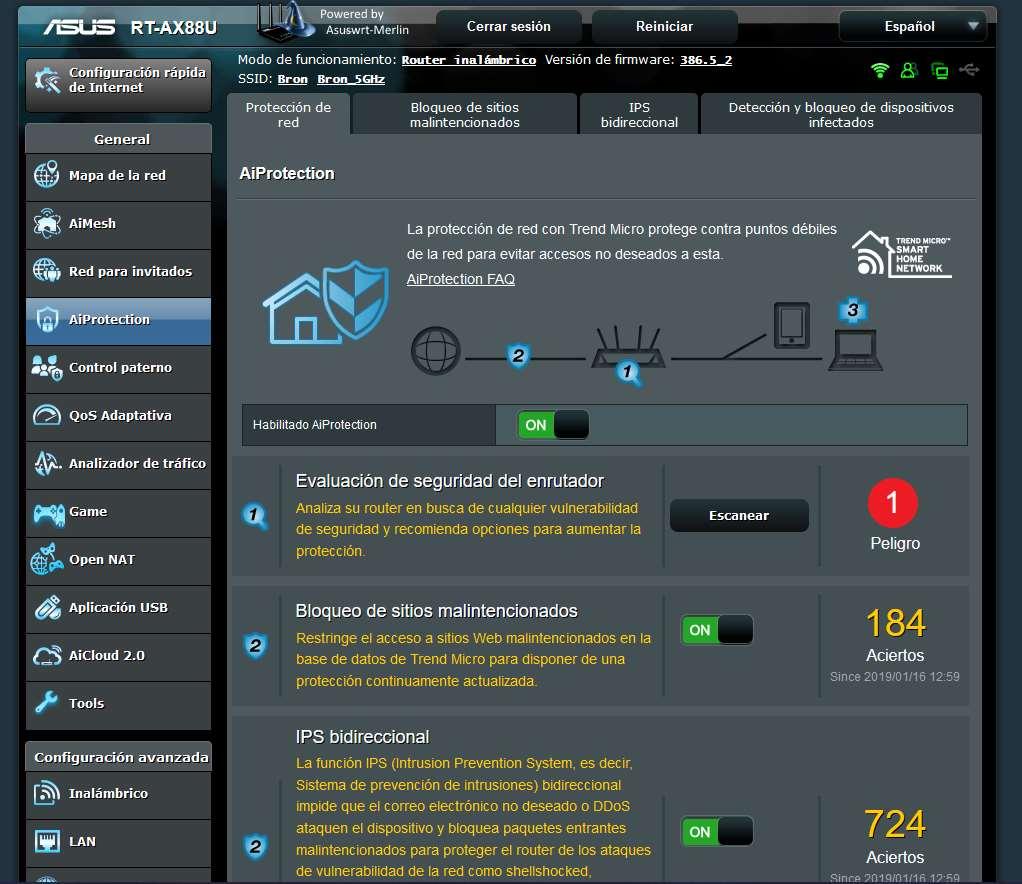 This protection suite allows us to:

Next, you have all the history that we currently have available: 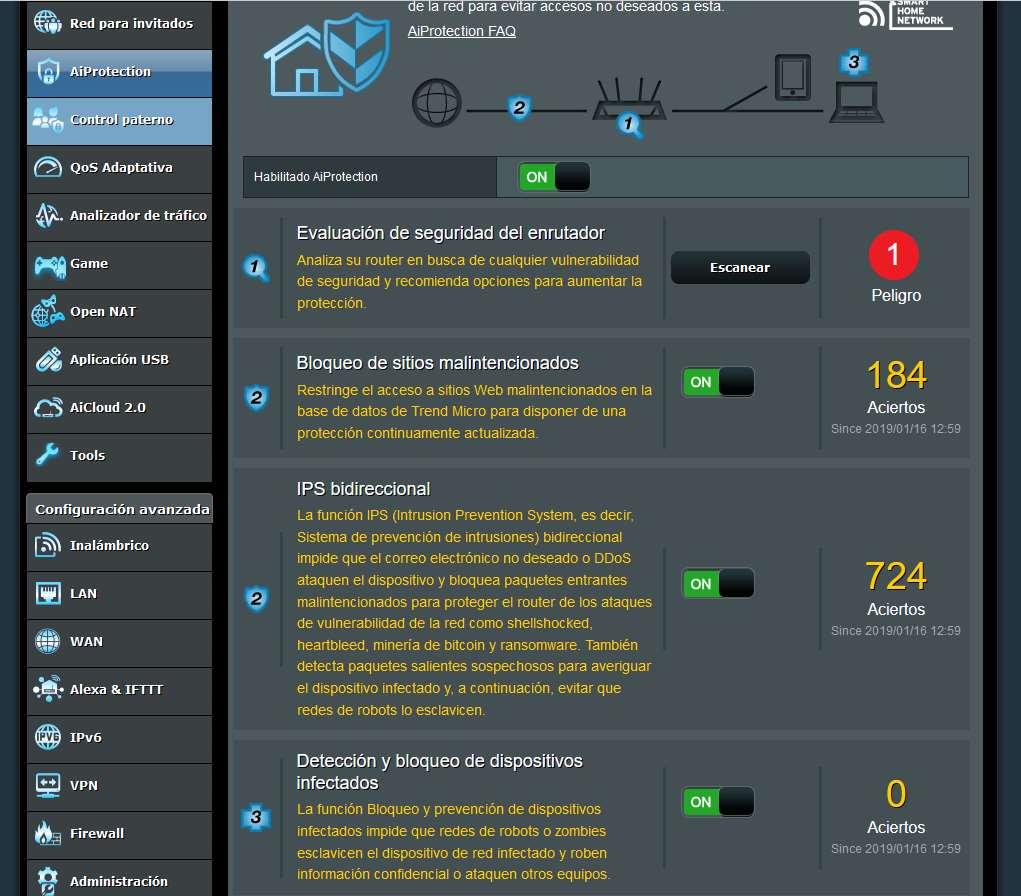 In the section of “Blocking malicious sites» You can see the number of hits, which devices are affected by the problem, and also the details of the event that has been successfully protected by Trend Micro security. 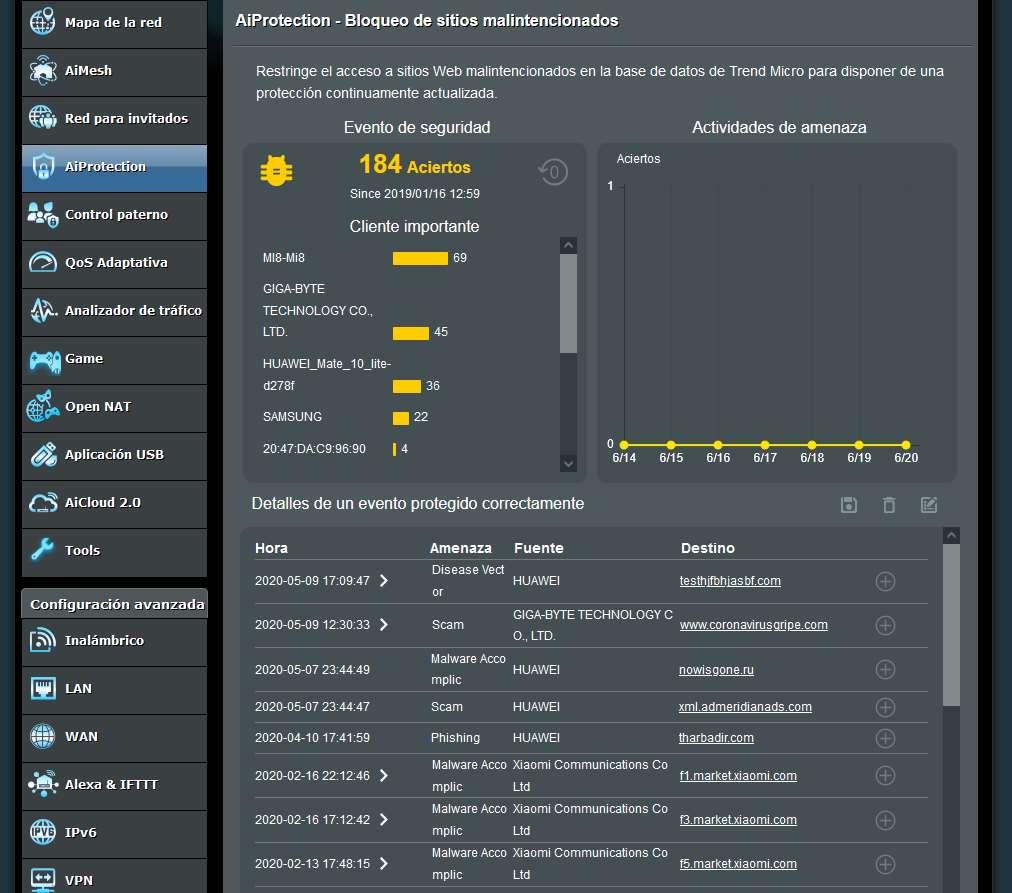 In the section of “Bidirectional IPS» you can see the number of hits, which devices the problem affects, and also the level of severity and we can even see the details of the event in a quite specific way. 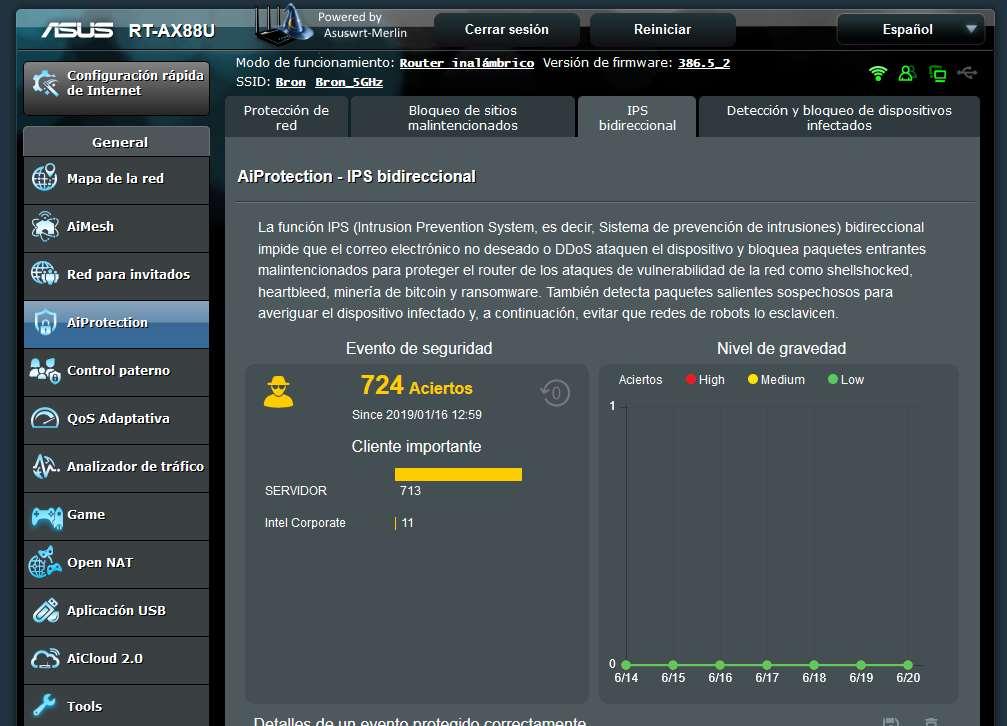 Finally, in the “Detection and blocking of infected devices” section we can see if there have been any problems related to this. In our case, we have not had any infection so we will have 0 hits, as you can see below. 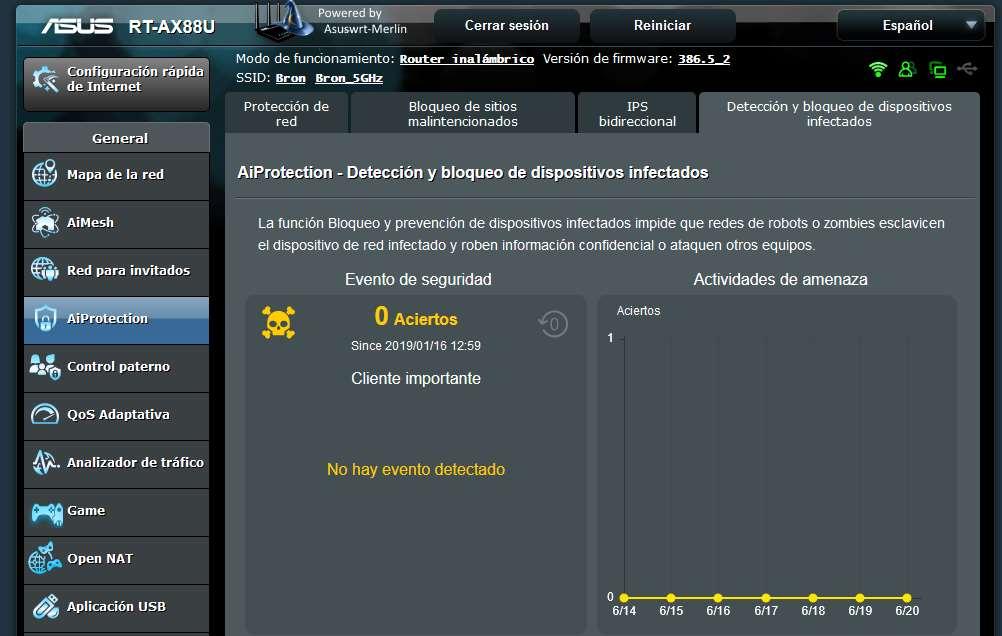 Other manufacturers usually incorporate parental control, QoS and even the firewall that we have in the router within the cybersecurity suite, in the case of ASUS we also have all these features, but in their respective menus and not all together in AiProtection.

The manufacturer NETGEAR also has security in its high-end routers and in its Wi-Fi Mesh systems, the commercial name of its solution is NETGEAR Armor and behind this technology is the well-known security firm BitDefender, one of the best companies in the world on security issues.

The main features of the NETGEAR Armor solution is that it has customizable profiles to configure the security suite in detail, it also has content filtering, blocking malicious sites, and even allows us to block a device that is infected with malware. Of course, we have the possibility to pause the Internet connection, see a complete record of everything that has happened and also the firewall (firewall) that we can configure in detail. 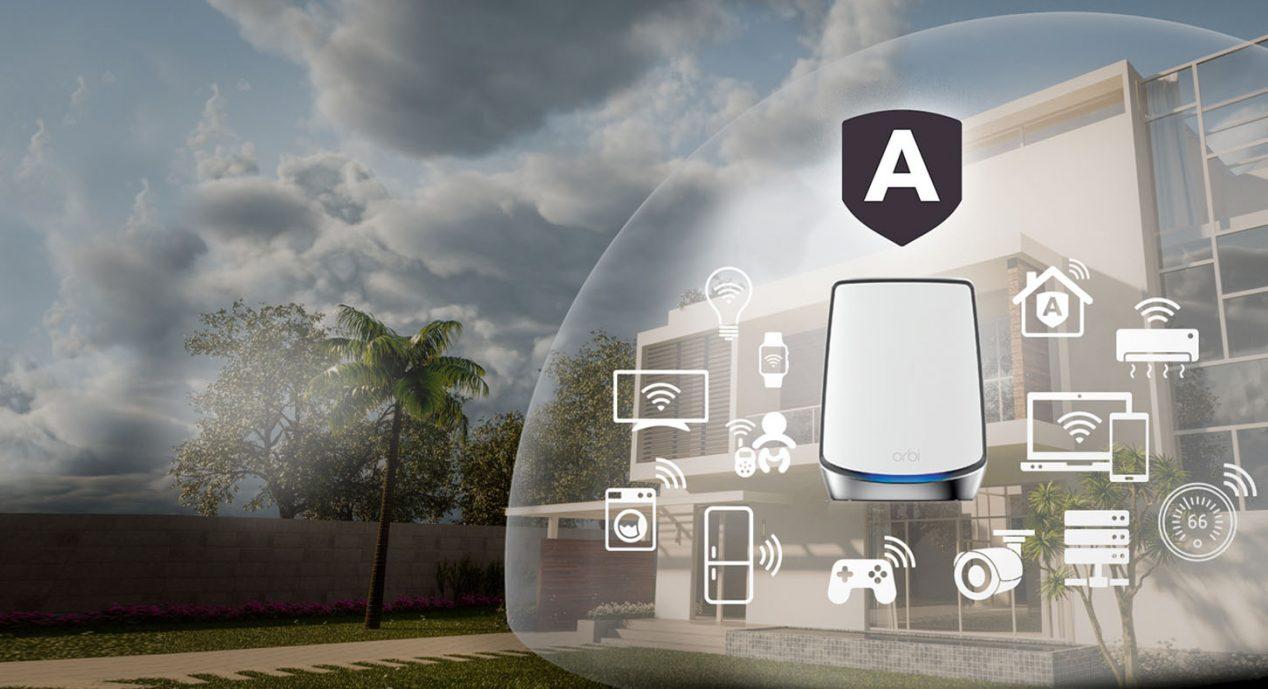 One feature that we like about NETGEAR Armor is that we can purchase a BitDefender security suite license for our computers and smartphones, in order to have an extra layer of security on our devices. In other words, it not only focuses on the protection of the router and the devices connected to it, but that outside the home they will also be protected, in addition, we have functions such as anti-theft of our devices, a VPN server to navigate safely and many more options.

We can use this NETGEAR and BitDefender service completely free for 30 days, once this period is over, we will have to pay 100 euros per year to enjoy all the security it provides us. In other words, we have to pay about €8 per month if we want to keep all the security features, in fact, they have recently increased prices since at first the price was about 60 euros per year. Taking into account that manufacturers like ASUS have it for free, and then Microsoft’s antivirus and firewall in Windows 10 and Windows 11 works really well, we do not believe that an outlay of 100 euros per year is justified.

The manufacturer TP-Link also has a security suite called TP-Link HomeCarewhich is completely free but there was a period of time where it was paidIn fact, they indicate in the conditions of the service that at any time you can pay and stop enjoying all the options completely free, so it is something you should take into account. In HomeCare, the manufacturer has incorporated everything related to parental control and also QoS or quality of service, which does not make much sense because they are completely different functionalities. This is something that other manufacturers like ASUS or NETGEAR also have, but not integrated into their “security”.

This manufacturer also uses Trend Micro technology to provide security services, that is, on paper you could say that we have the same technology as ASUS, since they use the same manufacturer. In this case we have an antivirus that will be in charge of keeping all the devices connected to the local network safe, either via WiFi or cable, this antivirus is in charge of blocking malicious sites, it also has an intrusion prevention system and even It allows you to put infected devices in quarantine, that is, the same options that we have always had in ASUS completely free of charge. 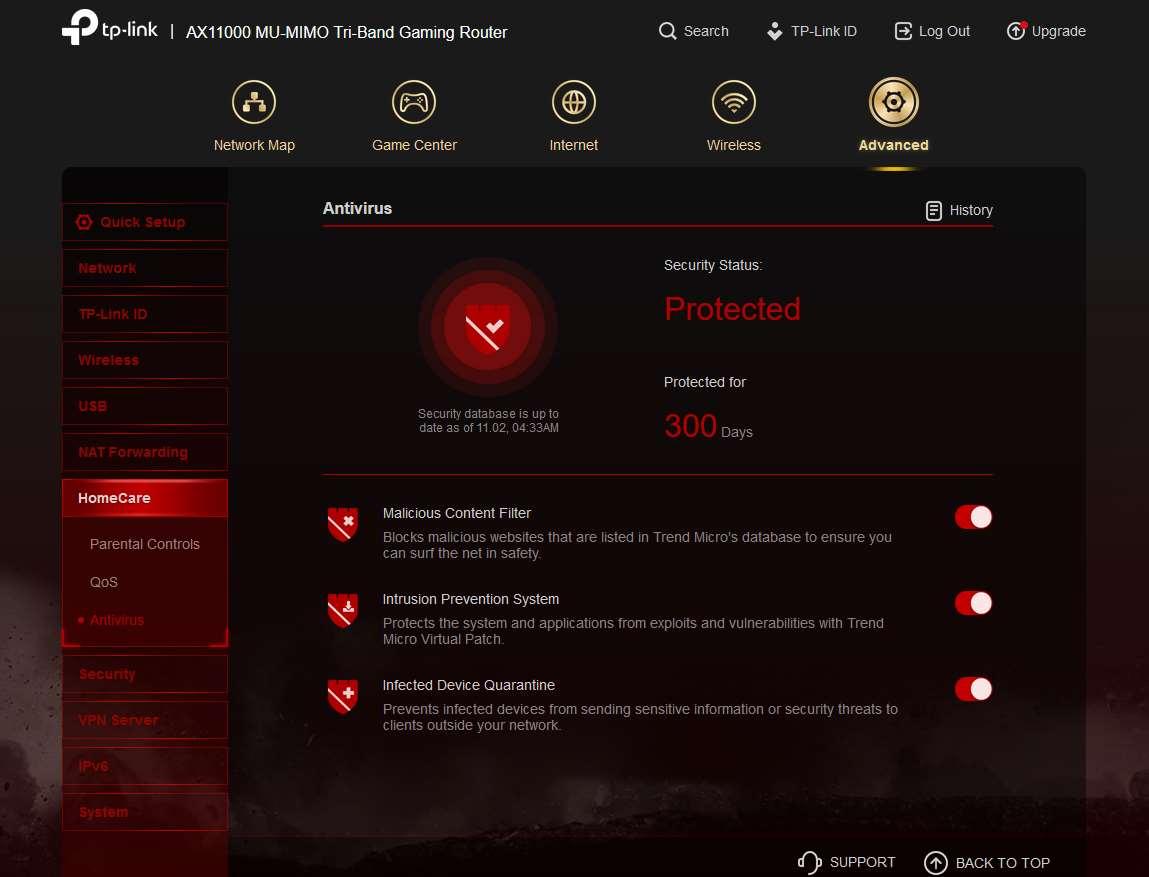 The weak point of TP-Link HomeCare is that the compatibility of its routers and Wi-Fi Mesh systems is quite limited. While at ASUS we have AiProtection in all routers and AiProtection Pro in mid-high range models, at TP-Link there are many high-end models that do not have this technology according to the manufacturer’s official website. The supported routers are the following:

The models of compatible WiFi Mesh systems are the following:

As you can see, we do not have great compatibility in WiFi Mesh routers and systems, in the case of ASUS, compatibility is almost complete for all its models, both low-end and mid-high-end.

Having an antivirus or security suite on your router that adds a layer of protection to your connected home devices is a big deal. Although we generally have antivirus on our computers, it is rare to find an antivirus on a smartphone or tablet, however, these security systems will allow us to scan all incoming and outgoing traffic in order to protect ourselves against the main threats. That our router has an antivirus or security suite does not imply that we can disable or uninstall the antivirus that we use on our devices, we must bear in mind that it is an additional security, one more layer, it is something that we must take into account, otherwise we could be at risk.

Of the three router security suites we have reviewed, we have seen that ASUS and TP-Link use the same Trend Micro antivirus engine, so on paper they are both the same. However, we must bear in mind that ASUS with AiProtection has greater compatibility in all its models, it is not necessary to go to high-end models to enjoy the security suite, in addition, TP-Link according to its use policy could start to charge a monthly fee at any time as has happened before, however, ASUS has always offered this service completely free. Regarding the NETGEAR Armor, it is a really complete system thanks to BitDefender, in addition, it has additional software for our computers and smartphones, however, the negative part is that we have to pay 100 euros a year to maintain the protection year after year. SOC as a Service: what it is and why it improves security

What is user authentication and how to improve its security