The evolution that GeForce Now has undergone has been truly impressive. Those of you who read us daily already know that one of the most important turning points that he marked was the introduction of ray tracing and DLSS, two hardware-accelerated technologies that require an RTX 2060 or better graphics card to operate in local mode.

With the implementation of both technologies in GeForce Now, NVIDIA made it possible to enjoy them on any device, and without having to worry about fluidity or image quality, since with both technologies activated we could play with 1080p resolution and 60 frames per second, which translates into total fluidity.

GeForce Now made it possible for us to forget about the eternal problem of hardware, and the minimum requirements, to enjoy our favorite games, and has also contributed to democratize access to the most advanced technologies in the sector. Some interesting and noteworthy achievements, there is no doubt about that, but NVIDIA knows that it cannot rest on the laurels of success if it wants to stay at the top, and therefore it has surprised us with a major renewal of the service that, as we are going to see below, takes us straight to the next generation of cloud gaming. 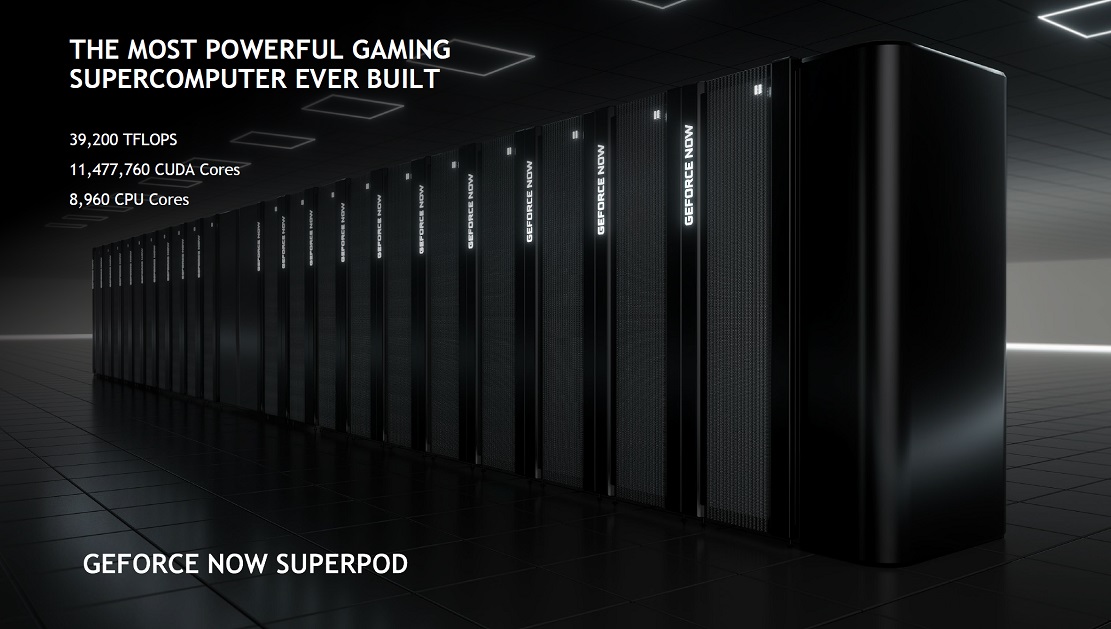 What we see in the image above is the central pillar of the new experience that GeForce Now will offer. The SuperPod is a next-generation supercomputer that is equipped with over 1,000 NVIDIA GeForce RTX 3080 graphics cards server grade, that is, specifically designed to work optimally on such a computer. In total, we find a whopping 11,477,760 CUDA cores or shaders (an RTX 3080 has 8,704) and a gross power of 39,200 TFLOPs. To power those graphics cards, the SuperPod uses AMD Ryzen Threadripper PRO processors, and it adds up to a whopping 8,960 cores.

The power of the SuperPod is beyond question, but what will this mean for the GeForce Now user? Well, it’s very simple, thanks to this new supercomputer, NVIDIA will be able to offer GeForce Now RTX 3080 Experience mode, that is, a next-generation cloud gaming experience with which each player will enjoy the following keys:

Count on that enormous amount of power will allow us to play at another level, and thanks to the PCIE Gen4 SSD the loading times will be minimal, which means that we can make the most of the time of each game session, without waiting. In this sense, I remind you that, for example, DOOM Eternal loads a map in just three seconds when it runs in a configuration like this. Obviously, we can also activate ray tracing in those games that support it.

The technical leap represented by the GeForce Now RTX 3080 Experience is enormous, but as it is a game mode in the cloud, we cannot forget another fundamental aspect, latency. NVIDIA has been very clear on this issue, and has confirmed that it has made numerous improvements that have allowed it reduce latency to 56 ms. The measurement was done on a “click to pixel” basis, and Destiny 2 was used as the game for testing.

Again we go to the important thing, what does this mean for the player? Well, a precise and adjusted response, without delays. Everything we do will be properly reflected in the game, and we can enjoy a truly optimal experience. As many of our readers will know, a high latency means that the actions we execute on our controller, keyboard or mouse will take longer to render on the screen (for example, you can jump to avoid an obstacle, but a high latency will cause the jump to be reflected late, and that you collide with that obstacle). 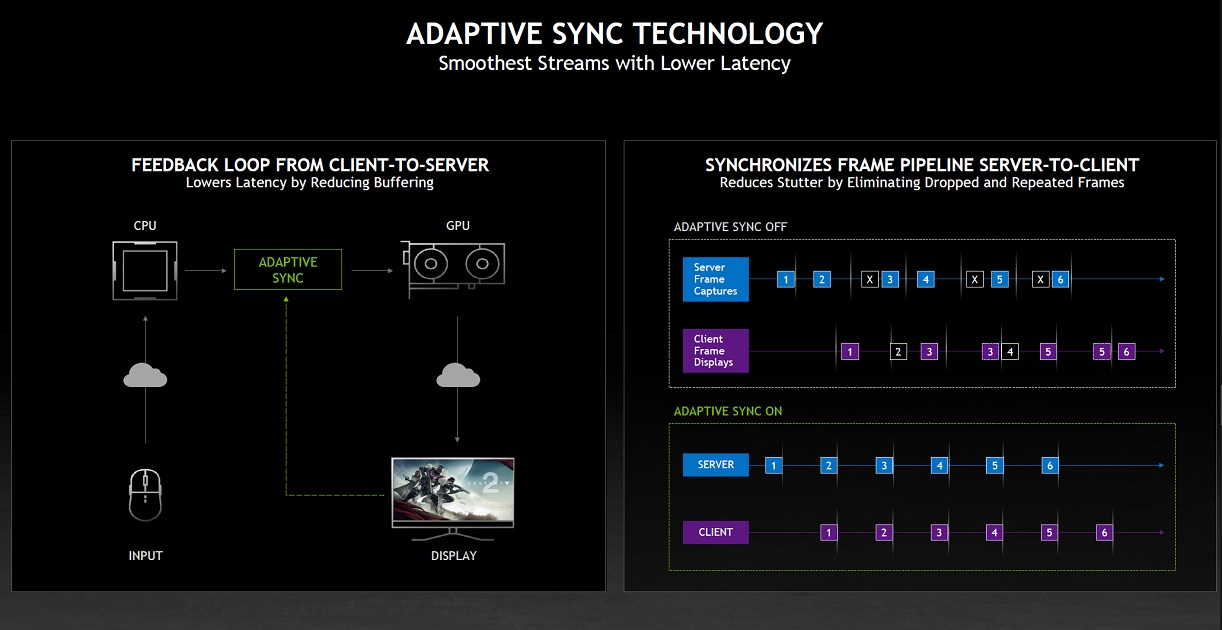 Another important issue is frames per second synchronization. It is a subject that I have touched on many occasions, so I assume that our regular readers are clear about it. When a game is executed, a series of images are generated per second that must be properly synchronized to represent each scene, each action and, ultimately, everything that the game includes in motion.

If there is a loss of synchronization, we will have problems of image stuttering or stuttering, and we will notice that the game does not go well even though it has, in theory, a high frame rate per second. To overcome that problem, NVIDIA has confirmed that it will use Adaptive Sync technology. Thanks to it, the user will receive a high frame rate that will arrive perfectly ordered. 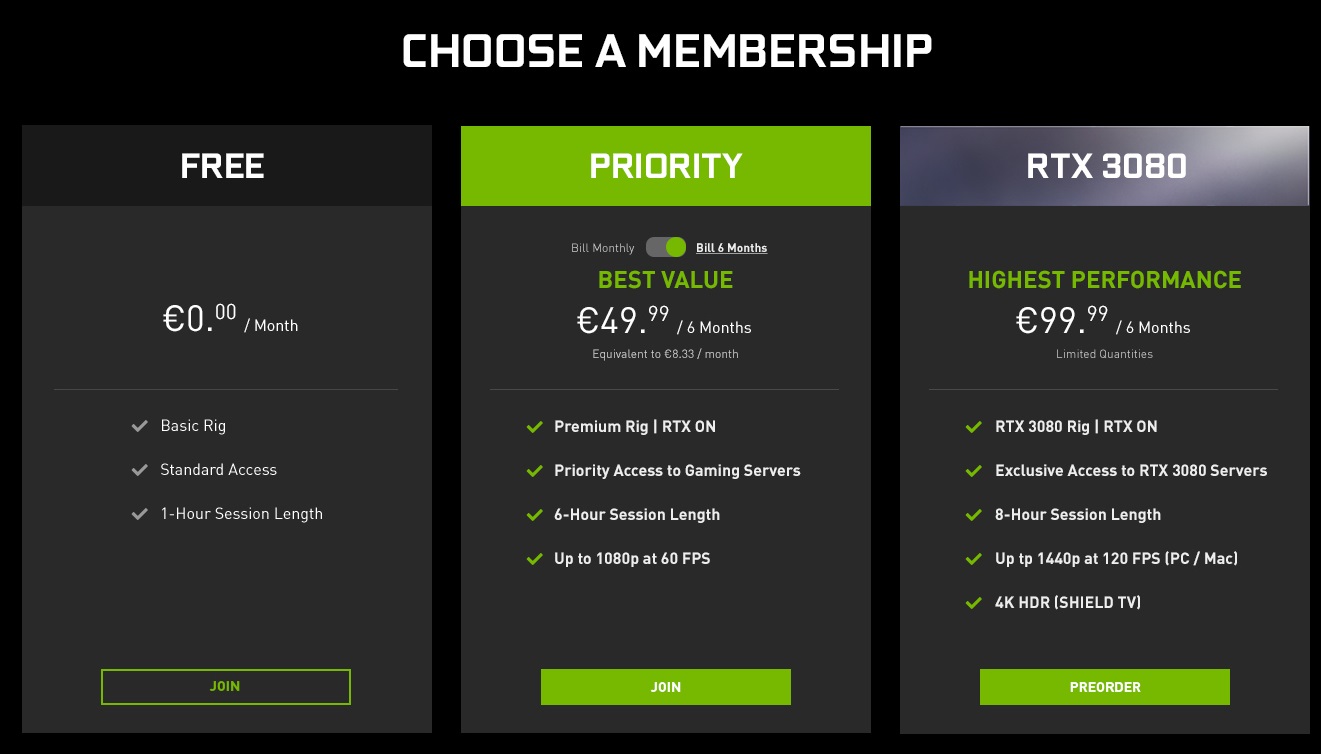 GeForce Now RTX 3080 Experience will be available starting today in early access mode for users with a “founder” or “priority” account, with a price of 99.99 euros for six months of service. The support and compatibility do not change with respect to previous subscriptions, which means that we can use it from the same devices and equipment, and that it is compatible with PC, Mac, Android TV, the Chrome browser, Android smartphones, iPhone and iPad to through Safari and Edge browser (beta).

If you want to be among the first to enjoy this new plan, but you are not subscribed to GeForce Now, don’t worry, NVIDIA has confirmed that the new priority accounts They will also be able to reserve a spot in the GeForce Now RTX 3080 Experience plan once they have completed the registration, so go ahead, sign up and you can reserve your place to be among the first to enjoy the game in the next generation cloud. 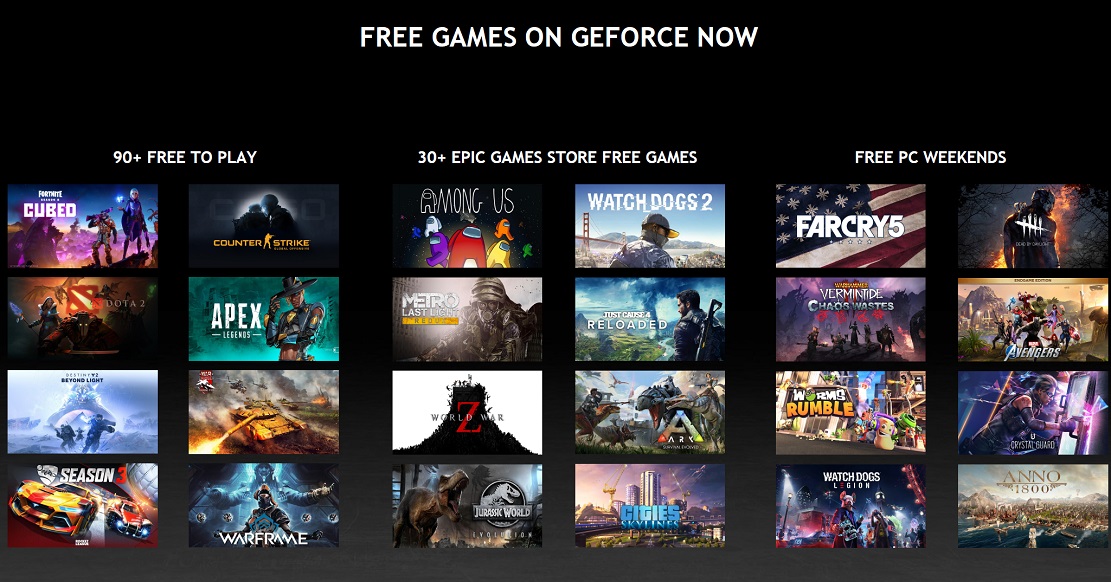 As you can see in the attached image, NVIDIA maintains the previous plans in GeForce Now, which means that we can also continue to enjoy the priority plan for 49.99 euros (includes six months of subscription), and free plan, that does not entail any cost. And speaking of free stuff, NVIDIA has also confirmed that will continue to bet on integrating free games into GeForce Now, both those that we can get on the main digital distribution platforms and those that are free by their very nature, and it will continue to expand the catalog of available games.

Are the Amazon Echos safe? There are those who say no for this