Hacks in Google Cloud to mine cryptocurrencies

In many cases, a successful attack on the cloud is due to poor security measures and also a lack of control implementations. Without strong protection, cloud services can become easy targets for cybercriminals. In a report by the Atlas VPN team, it was revealed that the 86% of Google Cloud accounts hacked I know they use for him illegal cryptocurrency mining. Regarding most of the hacks in Google Cloud, they are due to a weak password or that they did not have one in the user’s account. These are the results after a Google account was compromised.

Also, as can be seen above, Google Cloud hacks were also used to:

You may be interested in knowing what Google Hacking is and how it can affect your privacy.

The most attacked vulnerabilities in the Google cloud

Hackers when carrying out an attack are always looking for the easiest way to compromise their target. Sometimes sophisticated methods are required, but sometimes just entering the correct password is sufficient. In that regard, the 48% of Google Cloud hacks were due to a weak or no password for a user account or also to the lack of authentication for the APIs. By simply setting a more secure password, these users could have prevented their account from being hacked. 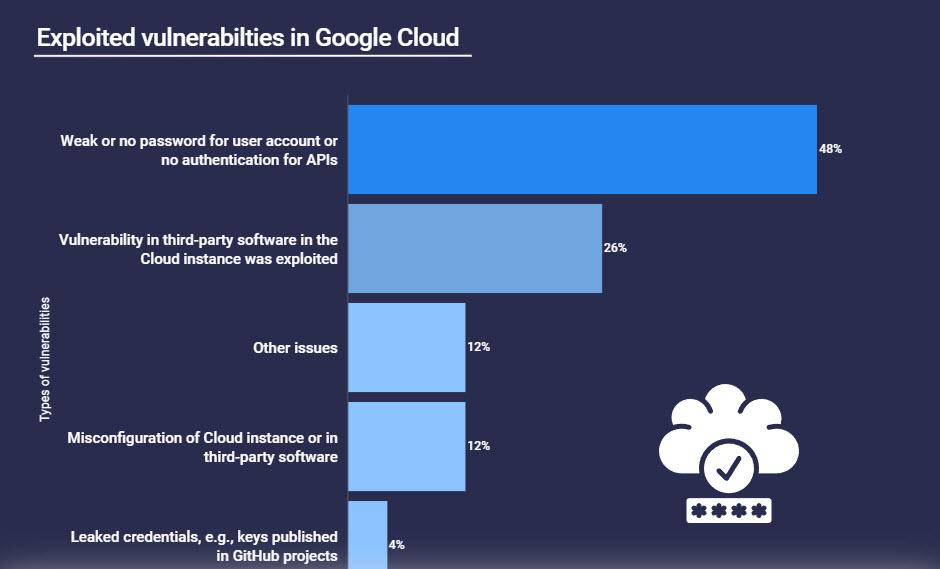 On the other hand, cybercriminals exploiting a vulnerability in third-party software in the cloud instance was 26%. In this regard, if we find a zero-day vulnerability, that failure could be attributed to the software developers not releasing an update. However, if that patch was released, the responsibility lies with the security team who did not update that software in time.

In summary, to avoid hacks in Google Cloud, the first step we must take is to have a strong password. However, if we want to improve security even more, we can activate multi-factor authentication to protect our accounts with Google Authenticator.

Wi-Fi problems? The decoration of your house may be the reason

How to identify a malicious domain Computer attacks against the router: what types are there and how to avoid them