Reasons why the Wi-Fi adapter does not connect via USB 3.0

It is important to be able to connect our external Wi-Fi network card to the USB 3.0 port. This allows for a transfer rate up to 5 Gb / s, while if we connect it to the USB 2.0 port it will be limited to 480 Mb / s. It’s basically 10 times the speed from one option to the other. It is the same as if we connect a hard drive and start copying files, we would notice an important difference.

But why does this happen? Generally going to be a problem with drivers card, which are not recognized correctly by the computer. But it could also be a failure by a security program that is interfering or even physical damage to the USB port itself.

One of the main reasons will be to have the outdated drivers. It is possible that there is a conflict with the operating system and for this reason it does not recognize the network card correctly or makes it not work as it should. It can happen for example when we update Windows to a new version and it has generated a conflict with the drivers of the devices that we have connected.

But this that we mentioned can happen both with the firmware of the network adapter itself, as well as with the USB 3.0 ports. This could generate failures that prevent our connected devices from being detected, for example.

Conflict over some software

It could also happen that we have some security program installed, such as an antivirus or, mainly, a firewall. This type of software sometimes conflicts with the network devices that we connect. You may think they are an external threat and prevent you from connecting to the network.

This is what is known as a false positive. It can happen both with programs (the most normal), as well as with physical equipment that we connect. If we have recently installed a firewall or an antivirus this may be the cause.

Can there be any physical failure of that port to which we try to connect the Wi-Fi adapter? It is another of the clear reasons. Maybe some pins on the motherboard have come loose after the equipment has suffered some impact and when connecting it it does not detect it correctly.

This case would not be the most common, but we must also take it into account. Especially if it has suddenly appeared without us having installed anything new or updated the system.

It could also happen something as simple as that the external Wi-Fi device is not compatible with the USB 3.0 ports. Logically this will prevent it from working and can offer us the maximum speed, beyond the capacity of a 2.0 port. Would be limited in the same way that if we use a Fast Ethernet network cable we could not have more than 100 Mbps.

If at some point it has worked well in a USB 3.0 port, with a good speed, we can automatically rule out that this is the cause.

How to avoid problems with the Wi-Fi adapter in USB 3.0

After seeing the main reasons why our Wi-Fi adapter has failures when connecting to USB 3.0, let’s see how can we solve it. Mainly we will have to check that the drivers are correctly installed and fully operational. But we also make sure that there is no program that can interfere, such as a firewall or antivirus.

The first thing we must do is update firmware both the Wi-Fi adapter as well as the USB 3.0 port. We could have problems simply having one of the two drivers out of date.

We have to go to Start, we write Device Manager and we open it. To first update the firmware of the network card we have to go to Network adapters and there find the one that corresponds. You have to click with the right mouse button and we click Update driver.

We must also update the firmware of the USB 3.0 port. The process is similar, but this time when we are in Device Manager we have to go to Universal Serial Bus Controllers and look for the one that corresponds to USB 3.0. We right-click and update it. 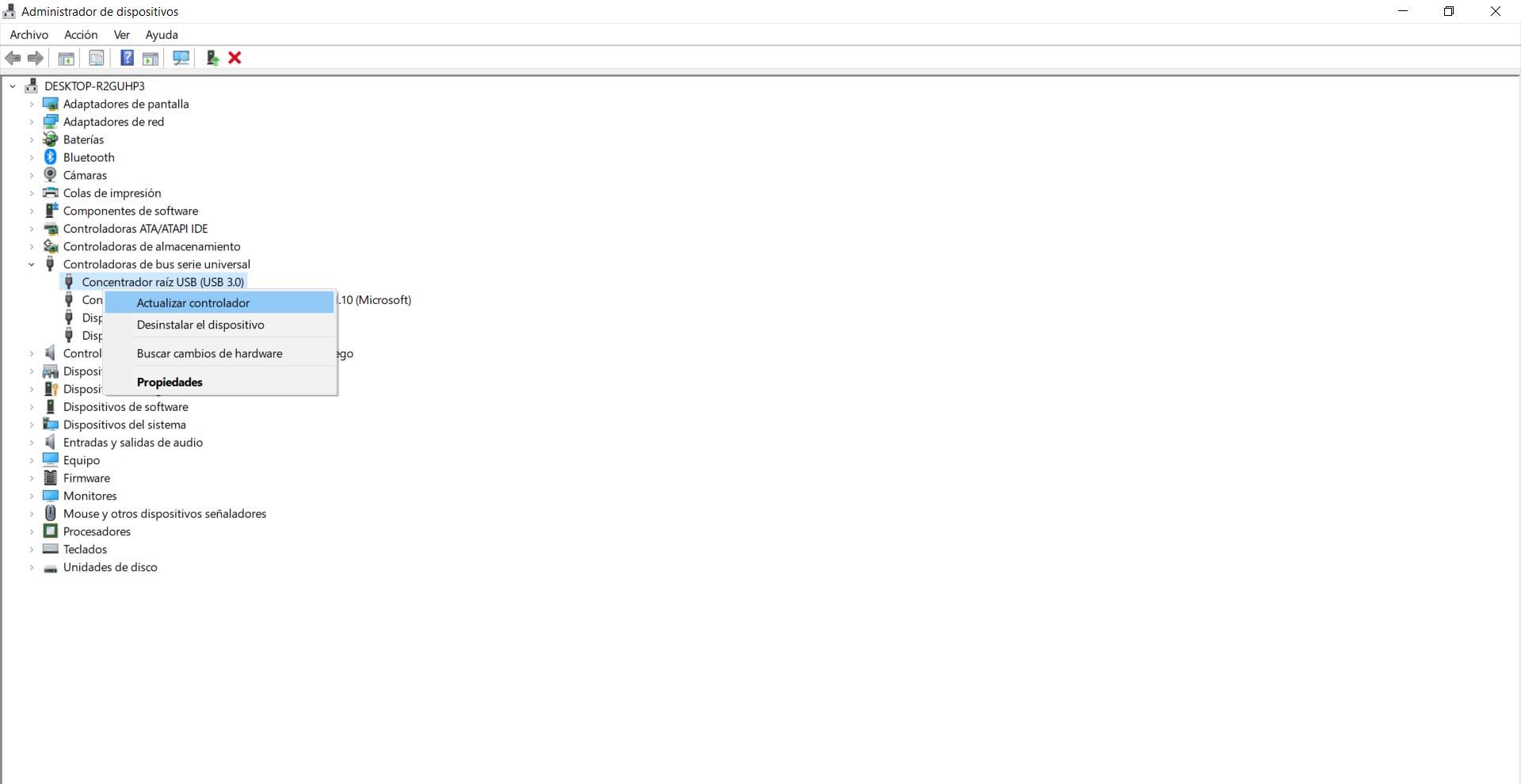 Sometimes it is not solved just by updating the driver, since the problem is due to a corrupt file in the drivers. This happens even after we have updated it but the process has not finished correctly and it hangs.

Therefore, what we are going to do to avoid this is to reinstall the adapters. It is a similar procedure to the previous one, but this time we are not going to click Update driver, but rather Uninstall the device. Later we connect it again and Windows will install it on the system.

Additionally, to make sure that everything works correctly, we can update it once we have reinstalled it.

Reset the network in Windows

If the above has not had any effect, Windows itself has a function to reset the network adapters and fix faults of this type that may appear. If when connecting a Wi-Fi adapter to the faster USB port we see that it does not work, we can include this option.

What we are going to achieve is that the system reset all the configuration. If for example we have updated Windows and something has not gone well and it does not recognize the network adapters or there is a conflict with the firmware, you can fix it. We have to go to Start, enter Settings, go to Network and Internet and click on Network reset.

Check the antivirus or firewall

Another cause of these failures may be the antivirus or firewall we are using. It especially happens when we install more than one and it generates a conflict that results in false positives and problems when connecting adapters and network devices.

We have to verify that this is not the cause and for this we can simply pause both the antivirus and the firewall momentarily and plug the Wi-Fi adapter into the USB 3.0 port. If we see that it works, we already know what the cause is and we would have to try a different antivirus or firewall.

Verify that we really have an adapter compatible with USB 3.0

This step is basic, but it doesn’t hurt to remember it. The fault may actually be that our wireless adapter does not support USB 3.0 port. This would cause it to only work with support for USB 2.0 ports and to be limited. It should be noted that there is compatibility with each other, so if we connect a device that only supports USB 2.0 in a 3.0 port, it will work but not with the characteristics of the latter. Basically we would have problems with speed, which we would not achieve as much as possible.

How do we check this? The simplest thing would be to know the exact model of that adapter and search the internet. Normally if we enter the Device Manager and see the network adapters connected, the name will appear, unless Windows does not recognize it well. We could also try it on another computer and see if it works or not when using a 3.0 port.

Therefore, when an error appears when trying to connect a Wi-Fi adapter to a USB 3.0 it can be caused by different reasons. We have seen that the normal thing is that it is a failure of the drivers and we can solve it easily if we keep them updated or reinstall them.

Learn how to use Chrome’s security checker

This they can do to impersonate your identity on the Internet

Danger if you use Netflix! This new threat jeopardizes your security