Today was undoubtedly a key day for Intel and, more specifically, for Alder Lake, its twelfth generation. And it is that his more than remarkable debut with Alder Lake-S, Today he took advantage of CES 2022 to introduce us to a plethora of families targeting multiple market segments, with processors that cover a singularly wide range, thus guaranteeing that both individuals and assemblers will always have a chip that adapts to what they need for each concept of the system they want to assemble.

ANDn what refers to laptops, today we have seen three new series: Alder Lake-H (one of them with the multiplier unlocked), Alder Lake-P and Alder Lake-U, which bring all the innovations of the twelfth generation architecture to a spectrum that ranges from gaming equipment, from which the best possible performance is always expected, to the lightest and most efficient mobility solutions in terms of its autonomy. In all cases, of course, taking advantage of the novelties, in terms of its architecture, of Alder Lake.

Y the focus is, of course, on the H family, the top of the range when it comes to performance, and that is where we will find chips up to 14 cores and 20 threads (six high-performance and eight high-efficiency cores), with a maximum frequency of up to five gigahertz, 24 megabytes of L3 cache and all with a base consumption (without turbo) as low as 45 watts. This is what the chip offers us, specifically Intel Core i9-12900H, of which we can also find a version with the multiplier unlocked, the Core i9-12900HK, which will allow us to put your performance to the limit.

With these two models at the top of the range and representatives of the i9 family, the proposal continues with three other Core I7 chips, two of them with specifications quite close to those of the two i9s (i7-12800H and i7-12700H) and a third, the i7-12650H, with 10 cores (six performance and four efficiency) and 16 threads, which we can see as the midpoint of Alder Lake-H.

And as an “entry point” (and I quote it because we remember that we are talking about Intel’s high-performance proposal for laptops with Alder Lake) we find three Core i5 processors: the i5-12600H and i5-12500H, both with 12 cores. (four for performance and eight for efficiency) and 16 threads, 18 megahertz of L3 cache and up to 4.5 gigahertz, and the Core i5-12450H closes the list, which has eight cores (four for performance and four for efficiency), it goes up to 4.4 gigahertz and has 12 megahertz of L3 cache. 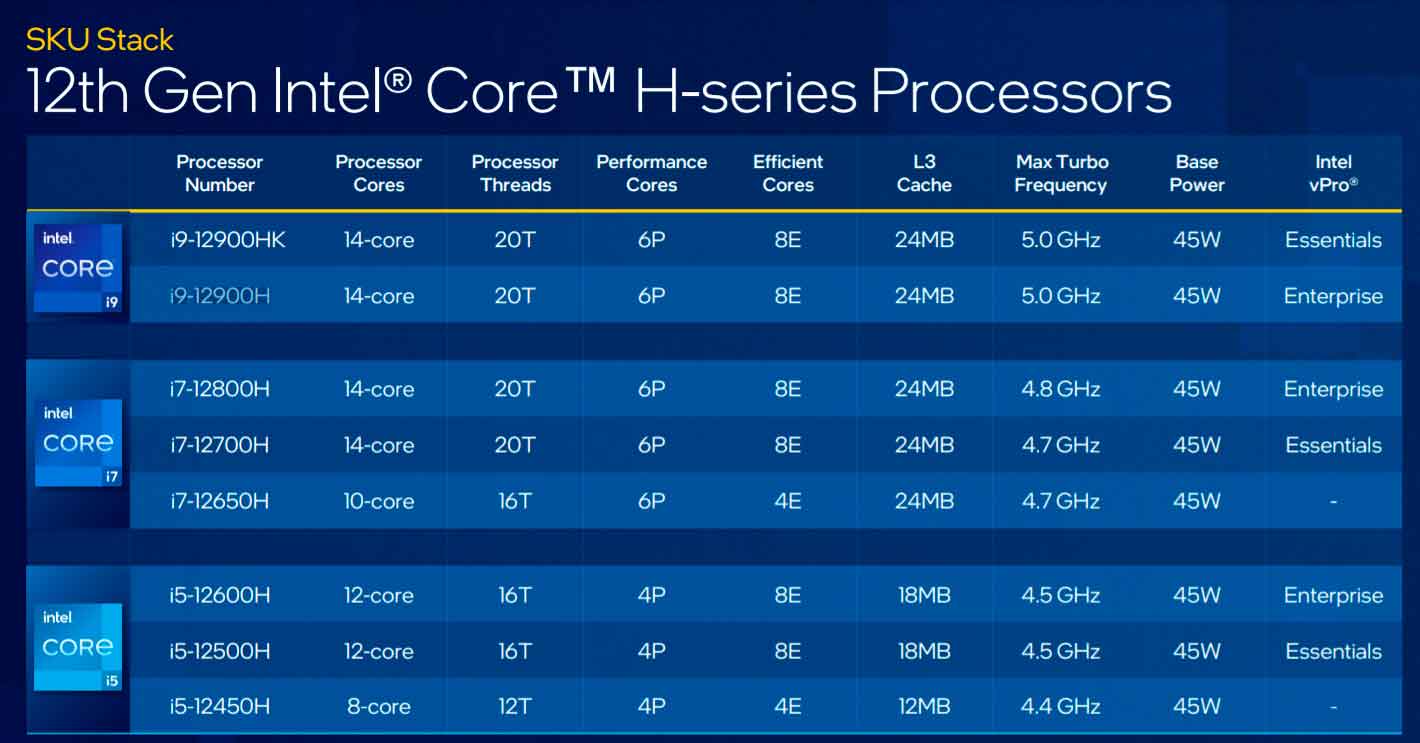 For those looking for a more intermediate point between performance and consumption, the proposal is Alder Lake-P, a family of chips with a base consumption of 28 watts and in which the top of the range is the Intel Core i7-1280P, with 14 cores (six for performance and eight for efficiency) for a total of 20 threads, capable of reaching a frequency of 4.8 gigahertz and with 24 megahertz of L3 cache.

With Alder Lake-P, as you can see in the table below, Intel’s proposal is three integrated i7, two integrated i5 and a Core i3 capable of scaling up to 4.4 gigahertz.

Laptops with an autonomy of more than 10 hours? Ultra-light and small-format notebooks with good performance but, above all, with enormous efficiency? The answer of the twelfth generation for these needs is undoubtedly Intel Alder Lake-U, a family that in turn is divided into two large blocks based on their base consumption, 15 and 9 watts, in which we also find representatives of the historic but still current Celeron and Pentium families.

Alder Lake-H: The novelties of the new generation

When we talk about a new generation, many people condense the conversation into performance. And this is understandable, of course, since it is normal to expect a significant jump in this regard. And after how difficult AMD has been making it (and continues to do), it was necessary for Intel to hit the table, something that it has undoubtedly done with Alder Lake, as we could already see with the S family a few years ago. months.

Now, talking only about performance is to stay with a tremendously simplistic approach, since not only does the user live by gigahertz, it is also important that, from his hand, he reaches the deployment of new technologies, as well as advances that allow optimizing performance and that provide a new vision of the future. And it is that without it, without evolution, perhaps we would still use dumb terminals connected to large servers on which all the heavy work would fall.

In this regard, from the hand of Alder Lake has come a huge set of novelties, of which the H family makes the most of. The main one, without a doubt, is hybrid architecture, a model that we are used to seeing in ARM integrated, but which makes its debut in the x86 world at the hands of Intel. This model, much more flexible but also more complex, is managed thanks to technology Intel Thread Director, which acts by distributing work intelligently, not only to optimize performance, but also the efficiency of the system. 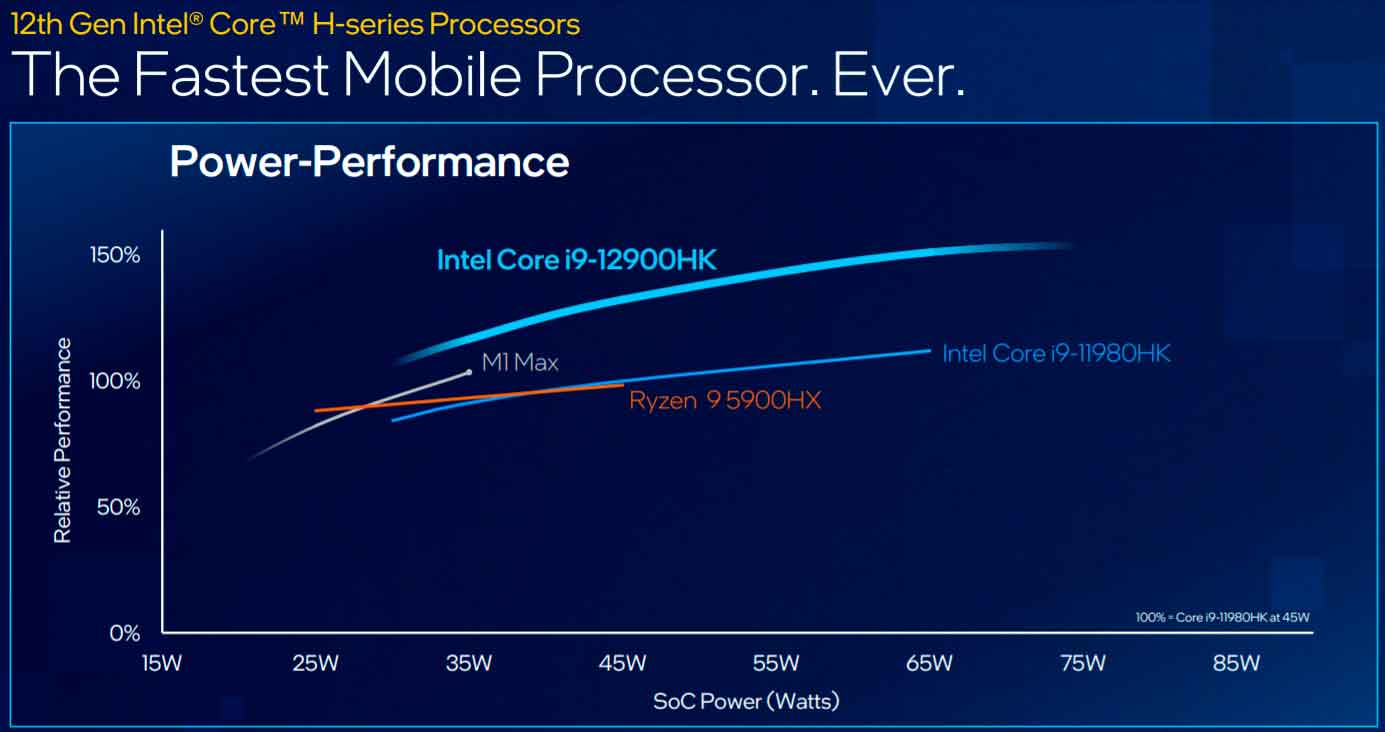 Thus, with all these improvements, as Intel has told us Alder Lake-H performance would be the outright winner when it comes to mobile platform, ahead not only (and as one might expect) to its predecessor, but also to the integrated ones from AMD and Apple, as you can see in the upper graph, in which the top of the range of this new generation is compared, the Core i9 -12900HK, which we already talked about at the beginning of this article, with the Apple M1 Max presented last October, and with the AMD Ryzen 9 5900HX, AMD’s top of the range for laptops.

Although efficiency is present in all Alder Lake chips, thanks to the debut of the hybrid architecture, Intel Evo certification is paradigmatic in this sense, since all the elements of the systems that opt ​​for it must meet a series of conditions that guarantee that we are not only talking about laptops, but about solutions designed with mobility in mind.

In the third iteration of the certification, we found a truly demanding list of requirements, of which the following elements should be highlighted:

All of this, of course, in addition to the already demanding prerequisites, related to battery life, instant-start capability, and fast-charge features, among others. In addition, one of the most interesting news is the arrival of specifications aimed at devices with folding screens, a market that is already emerging in the ecosystem of smartphones, and that should not take much longer to reach the world of laptops.

Sony believes that Call of Duty is a fundamental game, and that without it it would sell fewer consoles