In second half of 2021 dV Games is Ghenos Games they will bring to Italy some of the most acclaimed titles of the last year. Modena PLAY 2021 will be the stage for the debut of the Announcements and an opportunity to discover the best publications of recent months.

From the opening until the closing of the pavilions, at the dV Ghenos stand and at the adjacent tournament area, visitors will be able to play “non-stop” to all the titles released during the Kermesse, but not only.

In fact, in the space dedicated to the two publishing houses we will also be able to try the demos of Furnace, 10 Days in Europe, 10 Days in USA, Red Rising, Atlantis Rising is Coatl, but also participate in tournaments of Scythe, Red Rising, Klask, Terraforming Mars is Bang!

Let’s find out all the news of dV Giochi and Ghenos, available starting from PLAY 2021

But now the time has come to tell you which ones will be Announcements that dV Games and Ghenos Games they will make their debut during the Modenese kermesse.

Under the brand dV Games will come out Witchstone, Paper Dungeons, Unfold: Dark story while the only one Announcements distributed by Ghenos Games will be represented by Ensemble.

Wizards and witches have gathered in a secret and remote place to gather around the sacred Witchstone and regenerate its magical magnetic field.

Witchstone is a fantasy themed strategic tile-placing game, in which players must create spells in the cauldron and develop sacred energy using crystals, wand and pentacle. On their turn, each player chooses a double tile behind their screen and places it on their personal cauldron board. Doing so activates two different actions, and performs these actions in the shared central board. The goal is to maximize the effects by connecting the same symbols; this will allow you to perform the same action multiple times. But be careful because the options will not always be all available! The player who demonstrates the best witch or wizard skills during the occult procedure will be declared Keeper of the Witchstone.

Witchstone it was created by one of the most famous and productive game authors in history, Reiner Knizia, in collaboration with the eclectic game designer Martino Chiacchiera; is published by Huch & Friends and distributed in Italy by dV Giochi. 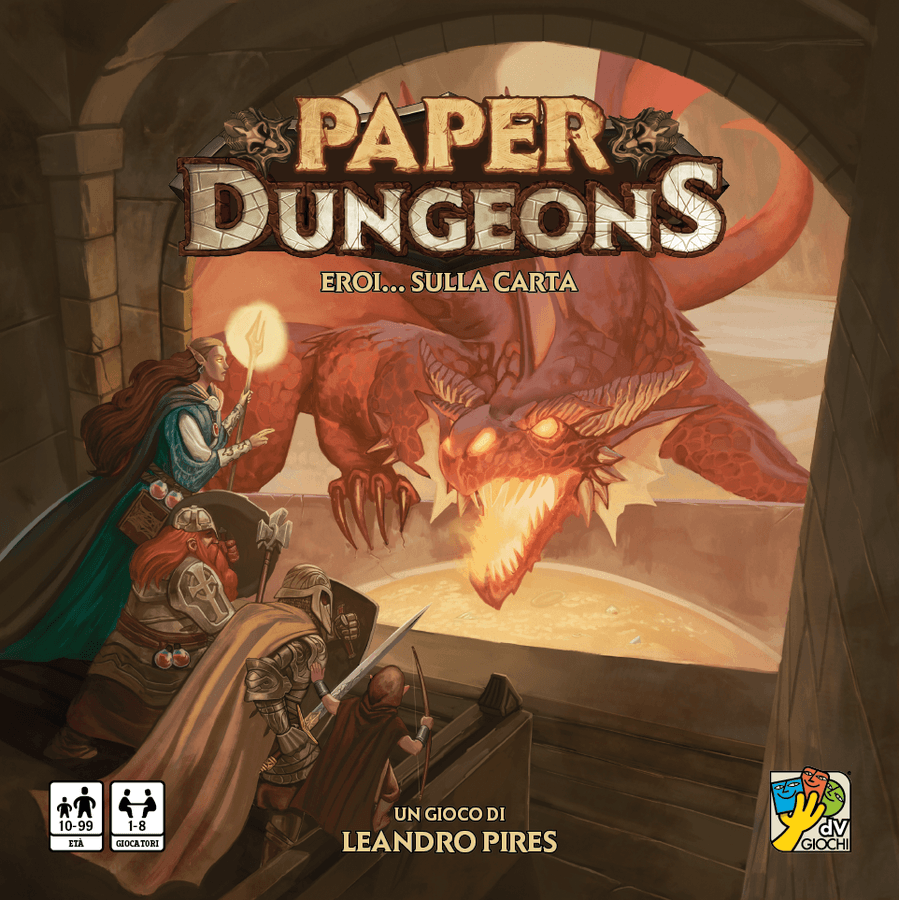 Paper Dungeons is the transposition of historical role-playing games into an exciting roll & write adventure.

In this board game, each player leads a group of heroes in search of fame and riches. Moved by dreams of glory, these intrepid adventurers set out from their village to explore ancient ruins and underground labyrinths, dungeons, full of monsters and traps. A player throws the six dice in the center of the table; then each chooses three of them and uses their actions on the game board. It will be possible to explore the dungeon, face monsters and bosses at the end of the level, recover lost treasures, improve their equipment and prepare healing potions. By cunningly choosing hero powers and level advancements, players will be able to pursue their personal goals and complete missions in each game to win the game and conquer glory!

This original pencil-and-paper-based dungeon crawler is perfect for fans of fantasy universes; it is accessible to all types of players and will conquer even the most experienced gamers. It can be played solo or with groups of friends, even from a distance!

Thanks to the four Mini-Campaigns, the gaming experience is enriched with narrative elements, for even more engaging games. 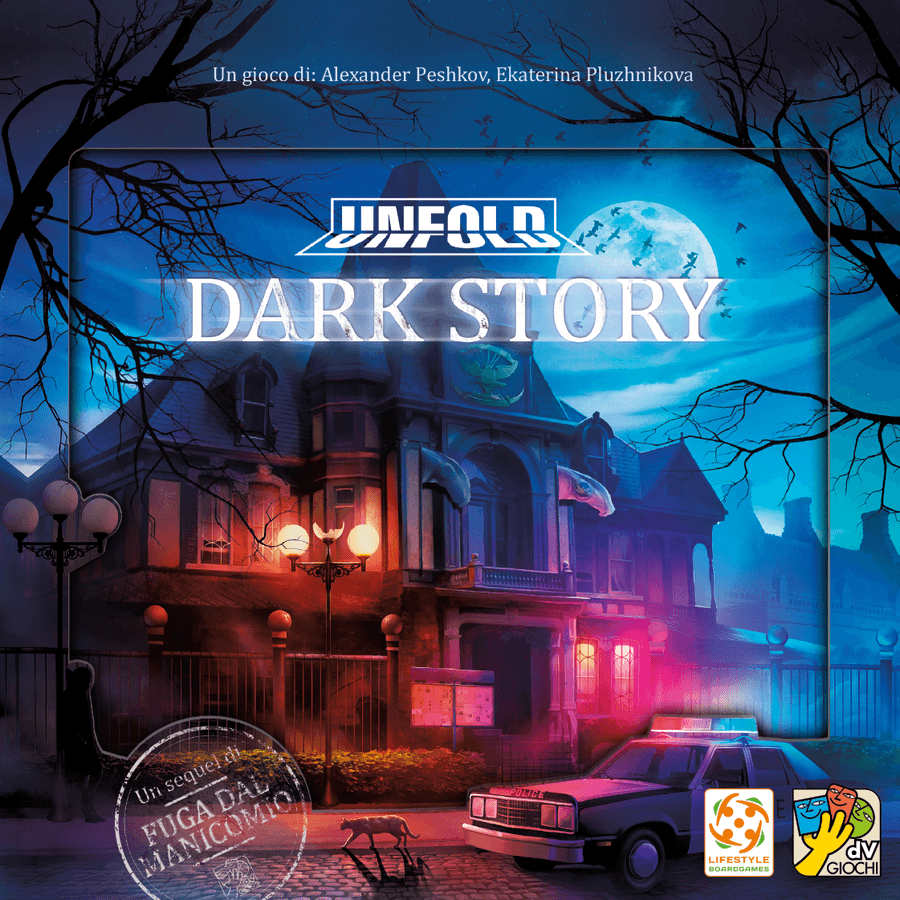 Unfold: Dark story is an exciting cooperative escape game packaged in a mysterious package. The original game system of this escape room develops between the overlapping folds of a folder that the players will have to unfold in front of their eyes, one sheet after another.

Doctor Dark, a renowned psychiatrist who heads a mental health institution, was arrested following a failed experiment. Players will have to help him escape the police station by solving a series of puzzles.

Unfold: Dark story it is a game in its own right, even if the thriller setting is a sequel to the story lived in Escape from the Asylum. 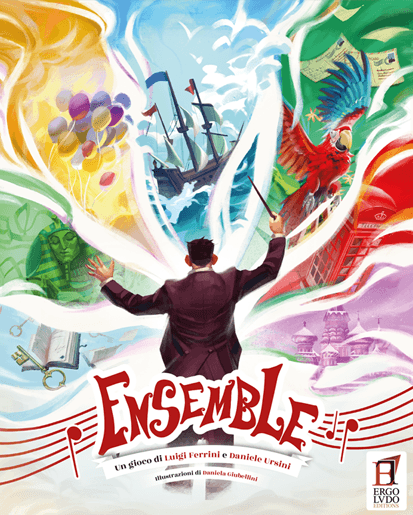 Ensemble is a connection-based cooperative party game. Players must synchronize their choices without communicating.

At the beginning of each round, each player must secretly decide which of the Memory cards on the board is best associated, in his opinion, with the Challenge card in the center of the table. To do this, he will play face down from his hand the Voting card corresponding to the position of the selected Memory card. If the majority of the players have voted for the same Memory card, the level is passed; if there is unanimity, a lost Life marker is also recovered. If, on the other hand, several votes diverge, the level is not passed and the players lose a Life token. If there are no more Life tokens, the players have lost; if, on the other hand, the ninth level is passed, the players can “sing victory”!

Ensemble reinterprets a classic and beloved mechanic in collaborative mode. Thanks to the intuitive rules and captivating illustrations, the game is a passe-partout for game nights with friends.

The Game of Life – Super Mario: the special version dedicated to the iconic videogame is coming

Pre-orders for Sine Requie – Heretics and Sorcerers are underway