We have been talking about the Intel Arc Alchemist for some time, a generation of dedicated graphics cards that will mean the return of the chip giant to one of the most important and most competitive sectors in the technological world. We have already told you on previous occasions all its keys at the architecture level, and we know that they will have dedicated hardware to accelerate ray tracing and artificial intelligence.

We also recently saw information that listed the different models that will make up the Intel Arc Alchemist series, as well as their possible price ranges, and we realized that this new generation of graphics cards could be very competitive price-performance ratioan intuition that Tom Petersen, an Intel engineer and one of the most important visible faces of the chip giant’s GPU project, has recently confirmed.

According to Petersen, the Intel Arc Alchemist will offer a groundbreaking value in price-performance ratio, to such an extent that they will surpass everything that exists on the market today. What does this mean for the user? Well, it’s very simple, that the sale price of these new graphics cards will be affordable, and that they will offer a higher performance than what would be expected for those prices.

In this sense, it is important to make it clear that Intel has differentiated three performance levels to describe the real potential of your graphics cards. At level 1 are DirectX 12-based games optimized for your graphics cards, such as Shadow of the Tomb Raider, while at level 2 there are Vulkan and DirectX 12-based titles that have less optimization, and finally at level 3 are the games that use DirectX 11. To give you an idea of ​​how important this differentiation is, Shadow of the Tomb Raider clocked in at 39 FPS running in DirectX 11 on the Intel Arc Alchemist A770, while in DirectX 12 it hit 80 FPS. All tests were done at 1440p.

To fine-tune the price of your new charts, Intel will be based on level 3, something that helps us better understand why Petersen said he spoke of a “breakthrough value in price-performance ratio”. This has given me a lot of thought, and frankly I think the price of the Intel Arc Alchemist A770 is likely to end up being less than 400 euros. If this is true, and if its performance ends up being similar to, or higher than, that of a GeForce RTX 3070, it would become the best graphics card in its category.

We are waiting to see more performance tests to be able to draw more precise conclusions, since at the moment the information we have is still quite scarce in that regard. In the final part of the attached video we can see that Linus Tech Tips also performed overclock tests. The Intel Arc Alchemist A770 reaches 2.5 GHz at stock frequencies with a consumption of 190 wattsa figure that rises to 285 watts when overclocking. 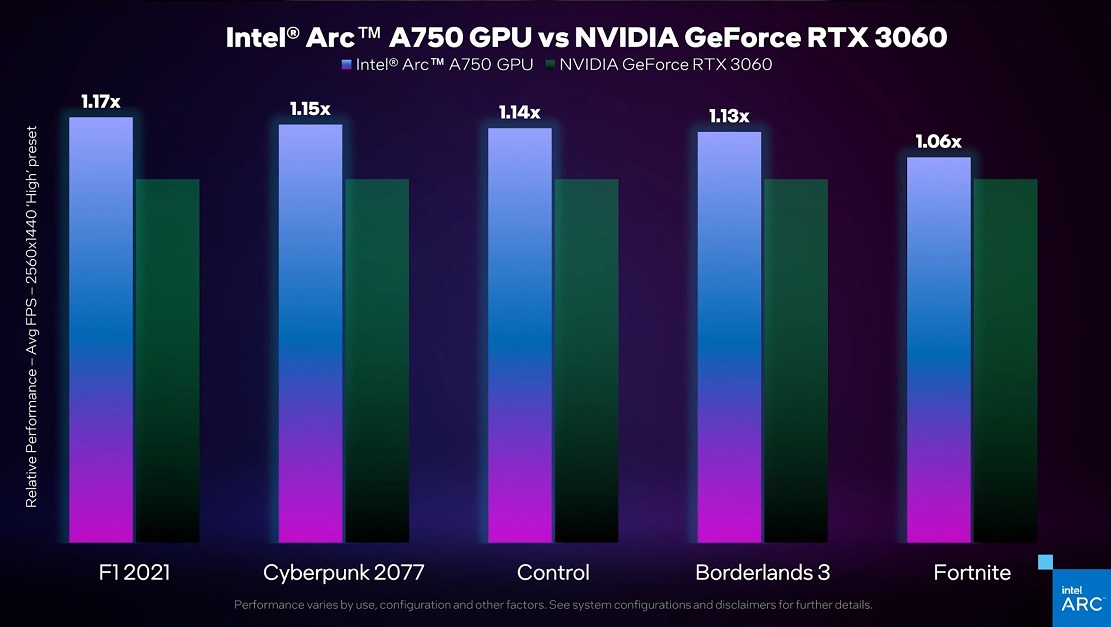 And the first performance data that Intel has shared leaves us with very good feelings, since, as we can see in the attached graph, the Intel Arc Alchemist A750 manages to outperform the GeForce RTX 3060 in some of the most important games on the market, including the popular and demanding Cyberpunk. With those data on the table, it seems that the Intel Arc Alchemist A750 would be more at the level of the Radeon RX 6600 XTalthough as I said before, we have to wait for more tests.

The ideal IKEA desk to work with your partner from home