tired of seeing Elon Musk making a lot of headlines in the last two days? Well, it looks like this is just the beginning. After buying a hefty share of Twitter shares and winning a seat on the social platform’s board of directors, the entrepreneur and Tesla leader is at the top of Forbes’ list of billionaires (anything new for him to be among the richest in the world?)

However, it is worth mentioning that this recent movement in the market did not count: the publication released its list of the richest in the world this Tuesday (5), but considered the values ​​​​accounted for only until March 11 of this year – which did not encompassed the agreement with Twitter.

The businessman’s fortune, however, was valued at US$ 219 billion, which amounts to about R$ 1 trillion at the current price. According to Forbes, the main responsible for the growth in Musk’s wealth was Tesla itself, which achieved a 33% growth in the price of its shares in the last year.

In second place was Amazon founder Jeff Bezos who, in turn, experienced a decline in his account as a result of the fall in Amazon stock, which has dropped 3% in recent days. In addition, the businessman has also invested part of his fortune in donations, thus having lost US$ 6 billion in total, compared to last year.

Bill Gates is one of those who has been on the list for years as one of the 10 richest people in the world. Image: Frederic Legrand – COMEO/Shutterstock

The list of billionaires is rounded off by other household names such as Bill Gates, investment guru Warren Buffett, and other technology executives — including Larry Page and Sergey Brin, co-founders of Google, as well as Larry Ellison, founder and CEO of Oracle, and Steve Ballmer, the eccentric former president of Microsoft who is now the biggest shareholder in the Redmond giant and owner of the Los Angeles Clippers basketball team.

The Forbes list released this Tuesday shows that the fortunes of the world’s richest suffered a retraction due to the pandemic and also the war between Ukraine and Russia – almost a third (34) of the total of the richest who left the list were Russians and saw their fortunes stagnate or decline because of market sanctions imposed in response to the conflict.

In this 36th ranking, the number of billionaires has dropped, accounting for a total of 2,668, or 87 people less than the previous ranking. But, even so, it registered 236 new entrants.

Despite the drop in the total amount (together, all billionaires represent a total of $400 billion less than in 2021), Forbes reports that more than 1,000 billionaires are richer than they were a year ago.

Among the newcomers, singer Rihanna stands out, with a fortune of US$ 1.7 billion. The star’s stake in the Fenty Beauty cosmetics line and the Savage X Fenty lingerie business boosted the pop princess’s earnings and helped her become Barbados’ first billionaire – in fact, the country made the list for the first time because of this milestone. .

Still in the entertainment industry, in addition to Rihanna, there is also the entry of director Peter Jackson, who joined the list after selling a stake in his shop specializing in action figures Weta Workshop to Unity Software for about $975 million. The executive’s fortune is estimated at US$ 1.5 billion. 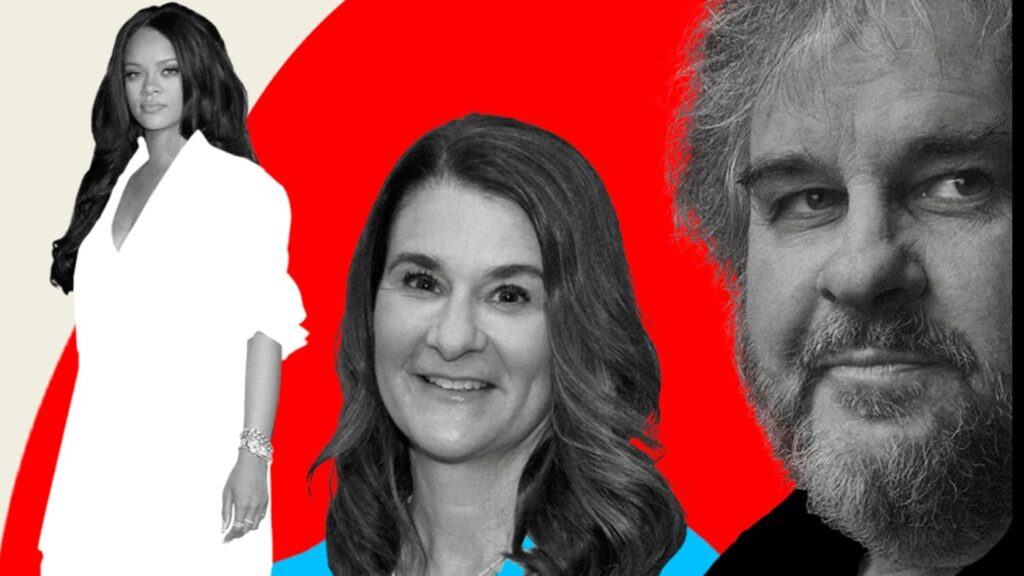 The new billionaires on the list include singer Rihanna, Melinda Gates and Peter Jackson – Image: reproduction/Forbes

Melinda French Gates is also on the list for the first time. She had been expected to make the list since their split, already had an estimated wealth expectation that could take her to the rankings – and that only materialized with her current $6.2 billion.

Melanie Perkins is also one of the highlights among the billionaires who joined the list without being tied to any family fortune. The executive is co-founder and CEO of the design app Canva, which was recently valued by investors at $40 billion.

Also according to ForbesMelanie and her partner, Canva founder Cliff Obrecht, each have a $6.5 billion fortune and have pledged to donate 30% of their company to the “Canva Foundation” for social causes.

Another interesting figure is executive Leonid Radvinsky. His name may not be familiar to many either, but he’s the figure behind the OnlyFans website – this one you’ve surely heard of, right? Radvinsky’s fortune is $1.2 billion.

Among other highlights is the fact that new countries were included for the first time in the ranking: Barbados, as already mentioned with the arrival of Rihanna, but also Bulgaria, Estonia and Uruguay conquered their first billionaires.

See the ranking of the top 10 billionaires of 2022 below:

THE Forbes Billionaires List is released annually, but the values ​​and positions of the executives can change slightly in a matter of days, as the ranking is updated in real time. The values ​​in the list above were recorded until the closing of this news.

The ICT sector offered in 2021 the best salaries, on average, in Spain

February and March, the months of cryptocurrencies in MuyPymes