Basic aspects with which to avoid problems

Beyond trying to raise and lower the volume with the remote, something that we take for granted that you have already tried, there are other alternatives that you can try before assuming that the Apple TV must go through technical support.

If it is with a specific app

This is an unlikely case, but it is not ruled out either. If you can perfectly hear the sound of all the applications except one, there is evidence that it is this one that has problems. It is possible that this problem sneaks into the version of the app you have and the developers have already solved it, so we advise you to update it.

If you are already in the latest version of this, what you can try is to uninstall it and then download it again from the App Store. In this way, all the data stored in the app on the Apple TV will be erased and with it the possible errors that could have originated. If after that it doesn’t work for you, you will probably have to contact the developer to inform them of the problem and can remedy it in a future update.

The classic: turn it off and on

A priori, electronic devices of this type are prepared to execute several tasks without problem while running other processes in the background without problem, however, errors can occur here and cause something not to work well and even the feeling that it is a hardware failure when in fact it is not.

To close these processes it is advisable to turn off and turn on the Apple TV and since it cannot be turned off as such but put to sleep, we advise you unplug it for several seconds and reconnect it. It is also convenient to do the same with the audio output, be it a television or an external speaker.

Check that you have the updated software

Although this is a very strange bug to be present in a stable version of tvOS (Apple TV operating system), it cannot be ruled out either that it may be present. Therefore, the best way to make sure that this is not the case is to have the latest version available for your computer installed.

To do this you must go to Settings> System> Software updates> Software update. In this section, the latest version of tvOS compatible with your device will appear ready for download and subsequent installation, if you really don’t already have the Apple TV updated to the latest. 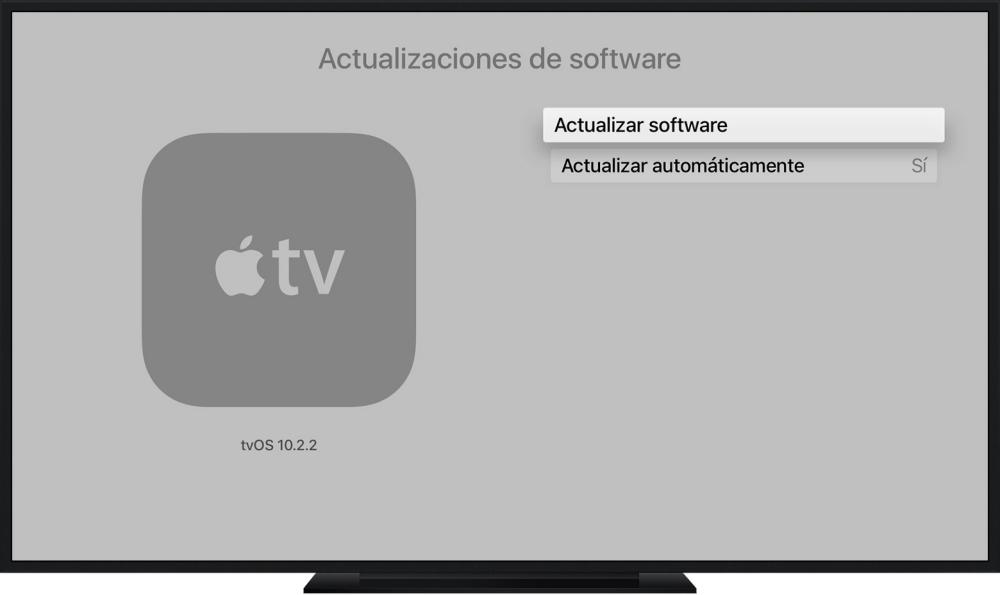 Another basic recommendation of something that should be checked in these cases is the Apple TV’s own sound settings. To do this, you just have to follow these steps:

Without leaving the aforementioned section, you can review «Temporary audio output»To select a Bluetooth or HomePod speaker that you may have here. The fact that it is temporary means that every time you start the Apple TV again you will have to configure it. You can also go to the menu before this one and enter «Audio format»And change the format from« No »to one of the other options that appear to finish making sure if there is a configuration problem.

If you are using the speakers of the TV itself

Once you have ruled out that the problem could be with the configuration of the Apple TV, it is time to start reviewing other aspects. In the following sections we tell you what you should check if you are using the television itself as an output, this being also the default output used by Apple TV for audio.

What if these speakers fail?

You are probably thinking that it is the Apple TV that is causing problems with the audio and that it is the TV speakers that are failing, in which case they would not work anywhere else. Therefore we recommend that you choose another source on television. All you have to do is put on any classic live broadcast channel to see if it sounds good on these.

If there are no problems here, we will see in the next sections what to do. Now, if you do not hear the sound in these other sources either, it is highly likely that the television speakers are defective, which would already require you to contact the brand’s technical service to report the incident.

The way in which the device connects with the television so that it reproduces the image and audio is through the HDMI cable, so the first way to start ruling out problems in this regard would be to check this cable. In cases of being defective, it could also affect the image, although it does not have to. Check that both connectors As the cable that unites them has no harm.

It is also possible that they are the connectors on your television or Apple TV those who have a problem. Try cleaning them with a soft-bristle toothbrush or a lint-free swab to rule out any dust. If the TV has various HDMI sources you can also connect it to these to check if it works on them. If you still have no way of making the audio play, it is recommended that try another HDMI cable, so that you can make sure that this is not the one that is causing problems.

Therefore, try to disconnect the Apple TV from that TV you were using and connect it to any other. Perform all the tests that you think are pertinent to see if it works. Obviously the fact that the device reproduces the audio perfectly on the new TV will be a clear indication that the other is defective, but if it continues to give problems is when the possibility that it is the Apple TV that has the failure increases. If you are connecting to an external speaker

If the audio problem you are suffering is having an external speaker connected, we recommend that you try to reproduce the sound through the television speakers and carry out the checks in the previous section. In this way you will rule out if it is a failure of the Apple TV or the speaker you are using.

If it’s a HomePod

In the event that you are using one or two Apple speakers, it is recommended that you make sure that your connection is made correctlyand. This can be done quickly by opening the Control Center on the Apple TV, scrolling to the option at the bottom regarding AirPlay and choosing the HomePod (s) as the audio source. It is also advisable that manually turn up the volume on these to make sure they weren’t mutated.

Another fundamental aspect is that you test that the HomePods reproduce audio correctly from from other sources such as the iPhone. Try to play a song on them by sending the signal through AirPlay. If it does not work in this case, you should focus solely on this speaker as the center of your problem, since it will be the one hundred percent culprit of your problems and not the Apple TV.

If you managed to play content from other devices, we return to focus on their compatibility with Apple TV, for which we advise you to check if they are updated to the latest software version availableThis is done from the Home app on the iPhone, iPad or Mac, going to the speaker settings and checking if there is an alert that there is a software update ready for installation on the HomePods.

If it’s another speaker

If it is not a HomePod but a Bluetooth speaker that you have connected, we also urge you in this case to try it with other devices to rule out your problems. If in those others you have no problems, it will be time for you to check if the connection is made correctly, going to Settings> Controls and devices> Bluetooth.

If you cannot hear the sound either once the Bluetooth connection is secured, it is highly likely that it is the speaker that has some kind of defect. Test to connect a headset or other Bluetooth speaker to Apple TV following the same steps, since if these work, it could be completely ruled out that the device’s Bluetooth connection system is defective. If you have concluded that the Apple TV fails

Once you have tried everything discussed in this post, it is possible that your conclusion is that what is failing is the Apple TV or that you at least have doubts about it. In this case, you will not be able to do much more on your own to try to detect and / or fix the Apple TV, since it must be Apple or an authorized service that does it.

For this we recommend that you request assistance from the Apple website (or the iPhone and iPad Support app) so that a professional can review the device. If it is finally detected that it is defective, they will offer you a replacement of the device that you will have to pay or not, depending on whether it is covered by the warranty or if it is due to some factor that it does not cover. Also if the legal warranty period has passed you will have to pay for the replacement.

The great novelty of the year on Mac, disappeared in macOS 12.1