On this occasion we have had the opportunity to try one of the keyboards of a brand that we like a lot, roccat. The Roccat Vulcan PRO It is a mechanical keyboard keyboard, designed for the gamer. It is the first keyboard that we analyze from this brand that has already left us with a very good taste in the mouth in the mice that we have been able to test before.

One of the main features of this keyboard is its design that has been highly reviewed in gamer circles. It stands out for its elongated shape with minimal margins in which the keys take center stage. In addition, it has two buttons for sound control, one to mute, another to activate the volume. A third button sits in between these two and controls the visual effects of the keyboard. To the right of these buttons we will have a wheel to directly control the sound volume.

The Roccat Vulcan PRO keys are designed with a new technology with an optical switch that provides high precision designed to meet the expectations of the gamer public. The interesting thing is that they have not only thought of gamers, but have also taken into account the other uses that the keyboard could have, and that is why they have implemented a key technology, called Tactile Brown which tries to reduce the noise of this mechanical keyboard. It is true that compared to other mechanical keyboards the noise may be less loud, but if we work at home and share an “office”, the noise of the keyboard sustained over time can be annoying since it does not reduce completely until it is equal to a membrane keyboard.

A very important feature of this keyboard to take into account is that It is not available in Spanish, only for the US., so the layout of the keys changes. It is true that if we have been typing for a long time and we do not need to look at the keyboard to write, it will not be a major problem, but if the use that we are going to give the keyboard is going to be shared with the one at work, it can be a disposition heavier and more problematic at times.

Going back to the keys, each one has LED lighting, 1.8mm actuation, 3.6mm travel distance, and 45GF actuation force. To put it to the test, they have tested it by pressing each key 100 million times. It also has 6 programmable keys from its configuration software. 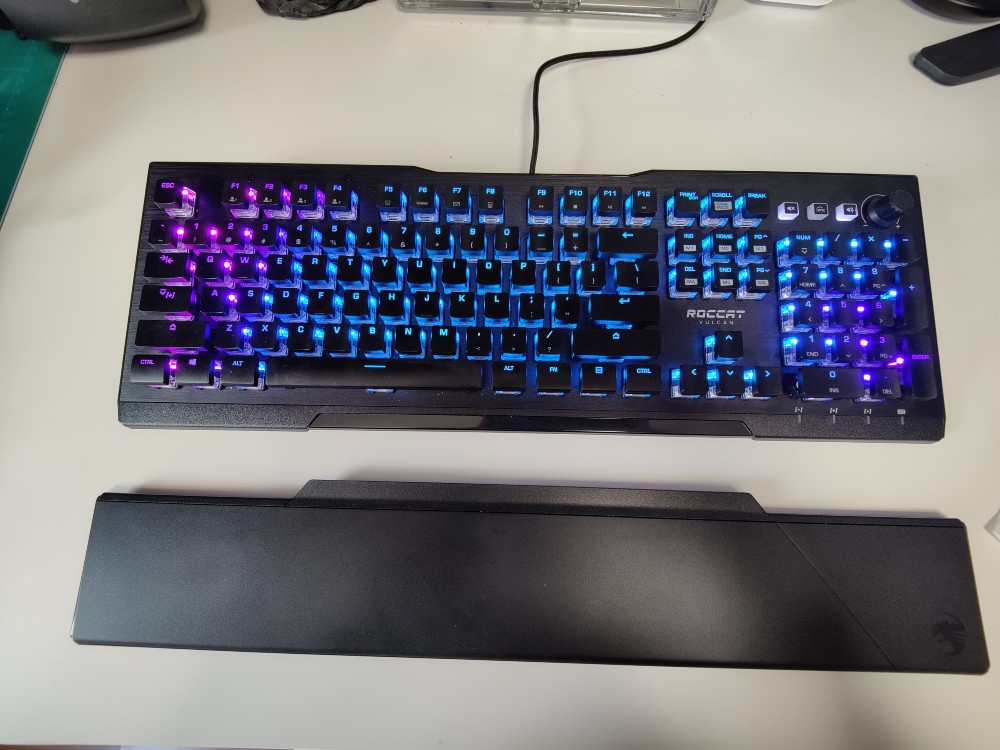 We really liked the magnetic wrist rest that it includes, with this system of magnets it never separates from the keyboard and is much more comfortable and ergonomic.

Before we have told you that the software allows you to program the keys with different types of lighting and that is that the Vulcan PRO comes with Roccat’s software, Swarm that allows you to customize the lighting of each key and all at the same time, ad infinitum.

One of its options is the AIMO intelligent lighting system, which reacts organically to the user’s behavior without having to spend too much time on its configuration. Basically the keyboard is illuminated in the form of a wave, in a dim way and illuminates each key in the color complementary to that of the wave at that moment if it is pressed. What we have detected is that on occasion the color has been frozen on some keys and does not change until we restart the computer.

In addition to AIMO, there are also other lighting modes, classic for this type of keyboard, such as wave, snake, static, heartbeat 2.0, breath, wave effect fading or completely customizable. From the Roccat Swarm application we can also control the brightness of the key lighting and adjust it to our liking.

As if it didn’t have enough sound, the application also allows us to add an extra sound to the keys, so that it sounds like a laser or like a typewriter. We can also control the delay or the speed of the repetition, as well as the speed of flashing the cursor.

From Swarm we can add special functions to each key so that when the keyboard is in game mode, we can access it as quickly as possible.

Roccat’s Vulcan Pro is capable of fulfilling all the wishes of a gamer, pinpoint precision and total customization. We have missed some more buttons to control the multimedia of the PC without having to resort to the functions of the keys, one of play / pause would have been perfect. We are also disappointed that it is not available in Spanish, since that would have made it not only a gaming keyboard, but it would have given it the versatility that is needed these days. The Roccat Vulcan Pro can be purchased at Amazon for €182.62.

A good gaming keyboard for those who just want to enjoy playing.

Ideal for streaming, the Logitech C920 HD Pro webcam is less than €55