One of the most important points of future screens is the ability for each pixel to have its own lighting, something that cannot be achieved with conventional LCD screens, therefore, one of the keys to Samsung’s QD-OLED screens is that work like MicroLEDs.

In other words, if, for example, we have a screen with a 4K resolution and, therefore, 8.3 million pixels, then with QD-OLED technology we have 8.3 million light sources that can be controlled individually, one by one. every pixel on the screen. The result? An extremely accurate representation not only of colors, but also of their luminance, one of the weak points of LCD screens.

Also, because the QD panel emits light in all directions this means that we can see the panel at many more viewing angles than conventional screens, thus making this panel ideal for televisions, which is where it will first go. implement.

Behind the Quantum Dots panel there is an OLED panel, but it emits only blue light, since the color change of each of the pixels is carried out by the QD panel. This translates into a better representation of colors according to Samsung. It is one of the most important improvements of this technology, due to the fact that it achieves in this aspect an incremental improvement in color representation, well above what the different manufacturers had offered up to now, including those of screens. OLED. 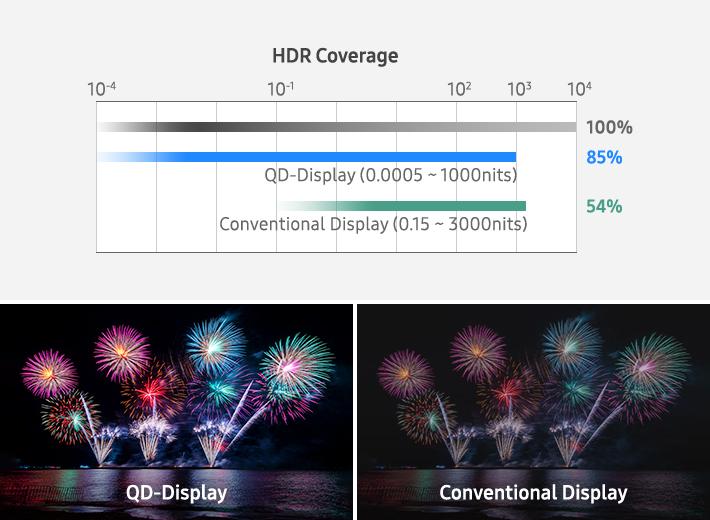 The use of OLED panels instead of LCD for Samsung’s QD Display brings with it a series of advantages of organic LEDS. The first has to do with contrast: if we look at the different LCD-type panels we find values ​​of 1,000:1 for TN and IPS and 3,000:1 for VA, where in the case of QD-OLED we can talk about values of 1,000,000:1.

This makes these screens have an excellent ability to reproduce colors in high dynamic range or HDR without the typical problems that occur when combined with LCD screens that have much lower contrast. Therefore, the window of colors that these screens can represent is much higher, which makes them ideal for use in graphic design and image editing.

Nor can we forget the brightness, measured in nits. Currently OLED panels can reach a capacity of 800 nits, but QD-OLED technology can go up to 1000 nits. This will mean the appearance in the future of a specification of the Display HDR True Black standard much higher than the current one to take advantage of the capabilities of this new technology. 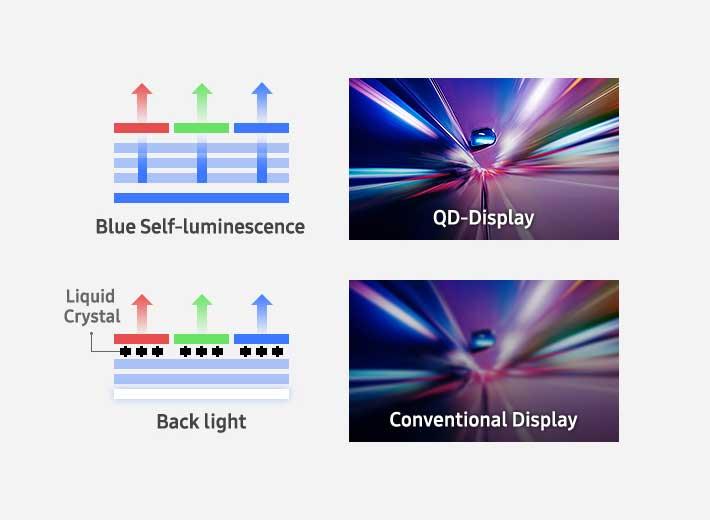 One of the disadvantages that LCD screens have, whatever their type, when it comes to needing a backlight is that this increases the response time, thereby affecting the clarity of the movement of objects on the screen. One of the advantages of QD-OLED screens is that the circuitry produces light as needed from the OLED panel that makes up the screen. The advantage of it? It doesn’t take much time to control the light and the result is extremely fast response times that hover under 1 ms on a gray to gray transition. 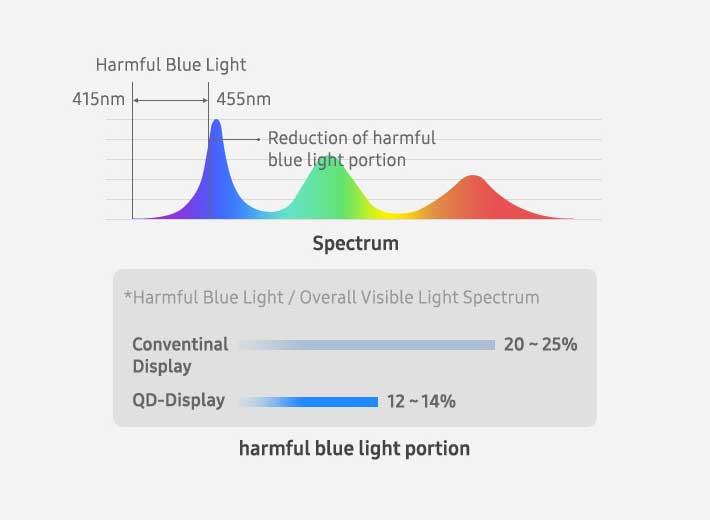 The so-called blue light ends up producing eyestrain and with it long-term headaches. It is not a problem that television users suffer from due to the distance at which they usually use their screens, however, it is important if we work daily with our computer and it is that those of us who spend many hours in front of the PC end up with our heads saturated.

One of the benefits of displays with Samsung’s QD-OLED technology is that it reduces the amount of harmful blue light that reaches our eyes. This is achieved by varying the spectral blue light peak outside the 415-455nm area. It will not be the first technology that is designed to reduce this problem that we will see in the coming years, since other manufacturers are working on similar solutions, but for those of us who work daily with our screen a few meters away, this is appreciated. One of the biggest problems with many televisions is when a light source hits the glass of the screen and it acts as a mirror in addition to showing the image on the panel. Samsung has added an anti-reflection coating to its QD-OLEDs, so outside light doesn’t directly affect the image.

Without a doubt, we are talking about a series of improvements that will arrive shortly to the brand’s televisions and that may begin to be implemented in professional and gaming monitors in not too long.

The keys to the new memory for graphics cards: this is HBM3

Punch on the US table: 20 billion for chip factories

What are the main formats of ebooks or electronic books?