There was four cups totaling 20 circuits. It also had 12 objects in total that had to be picked up from the ground. Some of them disappeared in different versions of Mario Kart, and others have been recovered over the years. There was multiplayer, as long as we had two controllers for the SNES. And the title also had battle modelike the ones now.

Nintendo had inadvertently created the crazy kart racing genre. SEGA was quick to replicate the idea with games like sonic drift for Game Gear in 1994. Even so, Nintendo’s success was spectacular, so it would not take long for them to squeeze the formula.

In just four years, Mario Kart made a significant leap in quality. The Nintendo 64 allowed the chaotic races of Mario and his colleagues to give the jump to 3D.

The characters remained in number, although there were changes: Donkey Kong Jr. was replaced by his adult version and Koopa Troopa by Wario. The cups lost a grand prize, a structure that has been maintained ever since. The game had 16 circuits in totaland the number of objects was increased to 14. The best object that was added in this title was one that you surely have a lot of love for, the blue shell. Here also arose object triplets. The battle mode of the title was also kept in this game, and it debuted four new scenarios.

On a mechanical level, the AI ​​of the game stopped being so tricky. In the SNES version they could use unlimited objects and dodge our attacks. From now on, the machine can only use items if it gets them on the track. Seeing is believing. the ones in 2001 they already had one GameBoy Advance they were able to enjoy the first Mario Kart for portable consoles. The graphic style was identical to SNES, with the same management system. The Nintendo 64 characters were kept in this title. And, for the first time, circuits from previous games appeared, in this case, from the Super Mario Kart. Thanks to the Retro CupsSuper Circuit had 40 different tracks. We could say with almost complete certainty that this was best mario kart title of all that exist. Unfortunately, it was released for a console that did not have the commercial success it deserved. Double-Dash had a very notable increase in characters, since the karts were driven in pairs. One was driving and the other was in charge of throwing the objects. To the point that two players could control the same car and take turns during the race.

It was also the first Mario Kart that left us choose vehicle. Each driver was assigned several cars with their different handling, weight and design. The objects also had a very remarkable evolution, reaching 20 in total. Moreover, they were also linked to the runners. Only the most like-minded couples could use special objects. For example, Baby Mario and Baby Luigi could use the Chain Chomp in a pinch. Items were also picked up in pairs, and a more complex strategy of attack and defense was possible.

It also had its own battle mode, with new and tremendously fun circuits. Split-screen play was possible with four controllers, but with additional accessories, it was possible to play with 4 screens and 8 controllers (two players per kart) and up to 16 players using the LAN connection accessory that could be connected to the console’s serial port. .

If we had to highlight a negative point of this game, we could only mention that it only had 16 circuits in 4 cups. Still, he was the first to add mirror mode, which challenged you to go back to 150cc racing, but in the opposite direction. And added the Cup Winners, a very crazy mode where you had to tackle all 16 circuits in one go (in each 50, 100, 150cc and Mirror mode). It was very tedious, but it was still nice. Of course, it was introduced in this game and little else. The bar for Mario Kart was still very high, and a few months after the launch of nintendo dsMario Kart revisited the portable consoles in 2005. It did not reach the level of its predecessor, but the video game gave us hours and hours of fun.

This title was able to take advantage of the dual screen console capabilities from Nintendo. You could see a map in real time on the lower screen and spy on the items that other players got. New objects were also added, such as the blopper, which littered the screen. The game had a total of 12 characters, also with their own. This game saw the birth of snapping, a technique of skidding and miniturbos that was born in the previous game, but that now, the most experienced players would use to take a great advantage over their rivals. This mechanic has remained in the following games of the saga, although with a slight nerf.

mario kart ds it had its own circuits and also its 16 retro races, where even some circuits from the Game Cube game were added. Some tracks were really well elaborated and overflowing with creativity, such as Pinball Waluigi, Air Fortress or Clock Tic-Tac.

As if that were not enough, you could compete with other players using the wireless connection (even if they didn’t have the game card). There was also online mode. And to this we had to add a great challenge modewhich disappeared in the following installments of the saga and some very well-crafted battle scenarios (you even had to blow into the console’s microphone to fill the balloons). In 2008, Nintendo would return to the attack with a desktop title. mario kart wii brought a huge catalog of characters, cars and also motorcycles. The distribution was maintained 16 new and 16 retro circuits in a total of eight different cups. It was a fairly continuous video game, and somewhat disappointing compared to the Game Cube title, among other things because the handling of the kart was somewhat complicated with the WiiMote.

were also added new items, although they did not reach the following titles. He sold more than 37 million unitsonly surpassed by the sum of mario kart 8 Y Mario Kart 8 Deluxe. It was released at the end of 2011. The great novelty of mario kart 7 was that of customize your vehicle. Now you could unlock parts for the cars, creating really interesting kart, glider and wheel combinations. The structure of 16 new and 16 old circuits was religiously maintained in this edition.

Still, we could say that Mario Kart 7 took a step back from Mario Kart DS. The circuits they did not become as colorful and creative as those of that other title, feeling quite repetitive. The challenges we discussed earlier also disappeared. 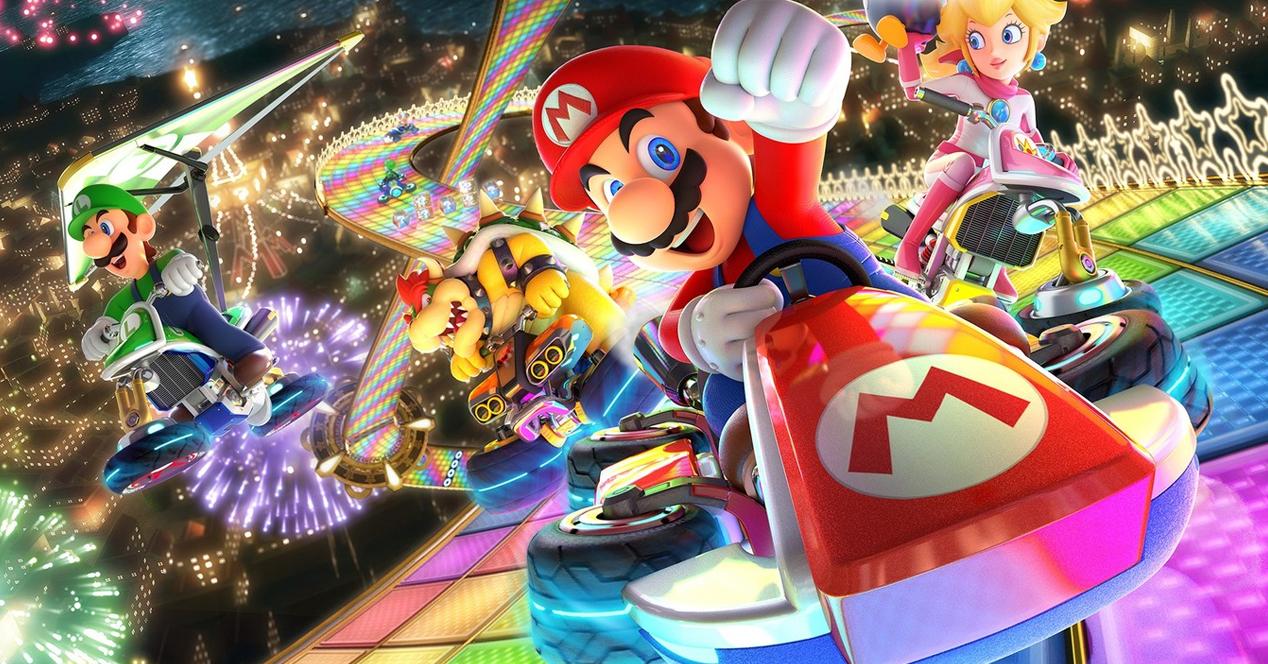 Although it hurts Nintendo a bit, let’s remember that mario kart 8 came out for Nintendo Wii U in 2014. Yes, the Wii U existed, and it was a flop. mario kart 8 It was the best-selling video game for that console. It was also the first to have a DLC, which led Mario Kart to open its horizons and accept characters from other Nintendo franchises, such as Link or the villagers of Animal Crossing – and circuits based on their worlds.

mario kart 8 kept the mechanics mario kart 7, allowing to make a car by parts. were also created gravitational surfaces and circuits that allow to be traced by two different zones. As a knockback, you can’t now acquire a new item while using one to block behind, modifying a meta game established since Mario Kart: Double Dash.

In 2017, Nintendo decided to break the historical tradition of releasing a Mario Kart per console. Nintendo Switch would have a Mario Kart 8, only, this time, in its Deluxe version —that is, with the DLC content integrated into the base game for Switch—. Thanks to this move, this title has become the Best selling Mario Kart of all time —He has also been the one who has been in the front line the longest without a substitute—. At the beginning of the year 2022, Nintendo presented a new DLC system what would you add 48 new tracks to the game progressively until the end of 2023. All these circuits are remasters of old tracks, and the DLC can be purchased directly or accessed through Nintendo Switch Online. Expansion Pack.

Other versions of Mario Kart

Mario Kart is a franchise exclusive to Nintendo consoles, but there are two exceptions to this rule: a mobile game and one for recreational. Finally, we must highlight the game for Switch of mario kart live, that allows you to play with a system of augmented reality. 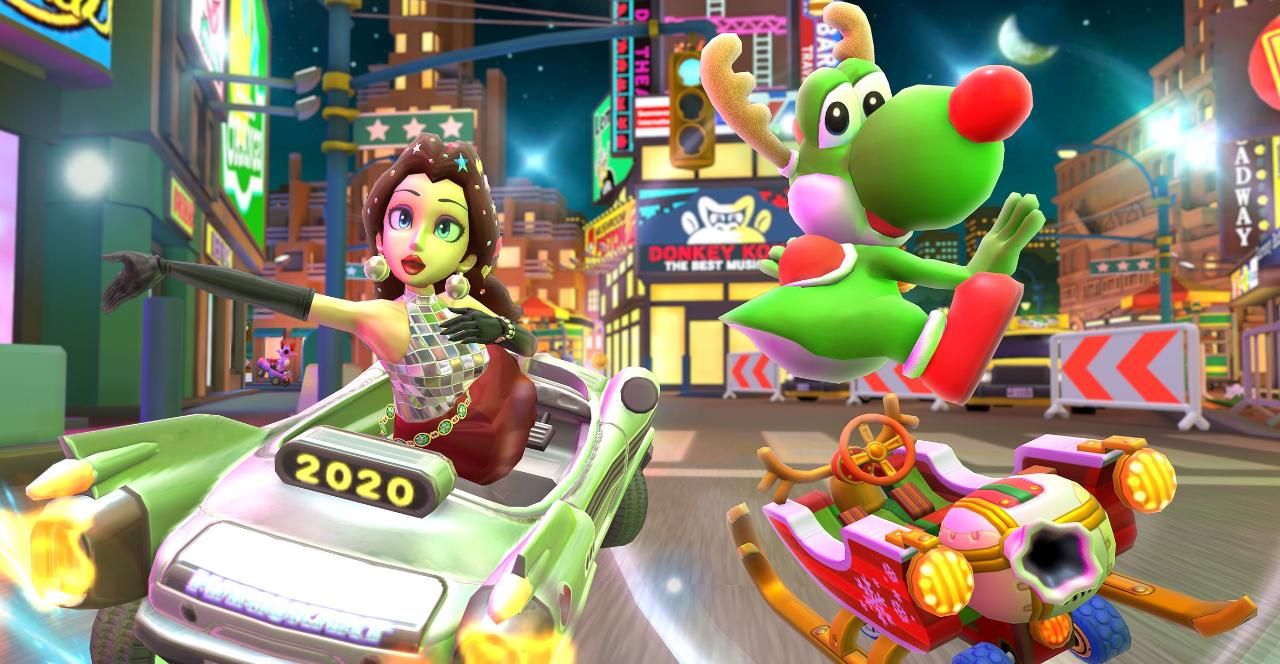 It arrived in September 2019 for iOS and Android. Following the same strategy mario run Y Animal Crossing: Pocket Campthe game is designed to interact verticallyalthough later he would win the mode scenery after one update.

The mechanics of this title are adapted to be a match free-to-play, although it retains most of the elements of the games of a lifetime. The first hours of the game mario kart tour they are fantastic, but things get a bit uphill as you progress, the only way forward being to go through their system micropayments and loot boxes. Since 2005, Nintendo and Namco collaborate to bring the plumber’s car game to the arcade machines. There have been three such titles in total:

All these games are entirely programmed by Namco. They have characters and items that go beyond the Mushroom Kingdom and have different game modes. The 2013 game allows two players compete in one carreplicating the style of Mario Kart: Double Dash. If you find one of these machines, do not hesitate for a second to play a game. The feeling is a bit strange, because it has its differences from console games. However, the experience is really interesting. Released at the end of 2020, this curious title turns your house into a racing circuit. Works with a royal go kart which is equipped with sensors, cameras and a card system augmented reality. With them, we will design our circuit through the rooms of our house, putting the obstacles that we want. You can limit yourself to putting chairs or give freedom to your imagination. If you have a cat, it will surely knock you out of the race like Bowser. And if you’re more of a doggie, surely your circuit doesn’t need a pipe with a Piranha Plant.

How many comics does the Sandman saga have?

The official PS5 headphones are on sale and in stock