Finally, we must highlight that Arctic is in the midst of the A-RGB era and, therefore, the configurable RGB lighting on these P14 fans could not be absent. For this, the manufacturer has mounted 12 A-RGB digital LEDs that can be configured independently using the motherboard control software, so you will not need to install any additional software on your PC for this.

For this analysis, the manufacturer has sent us a “Value Pack” consisting of a package containing three units of this fan, and which can also be purchased at a slightly lower price than if we bought three units individually. . They come packed in a compact neutral-colored box that only has an identification label that, incidentally, includes a QR code that leads us to the product’s website where we can find all its technical specifications and the instruction manual.

As accessories, in this case Arctic has been as concise as with the packaging and only includes a transparent bag with twelve screws, just enough to be able to anchor the three fans included in the pack to the box.

Here you can see the three units of the Arctic P14 PWM PST A-RGB 0 dB fans that are included in this Value Pack. 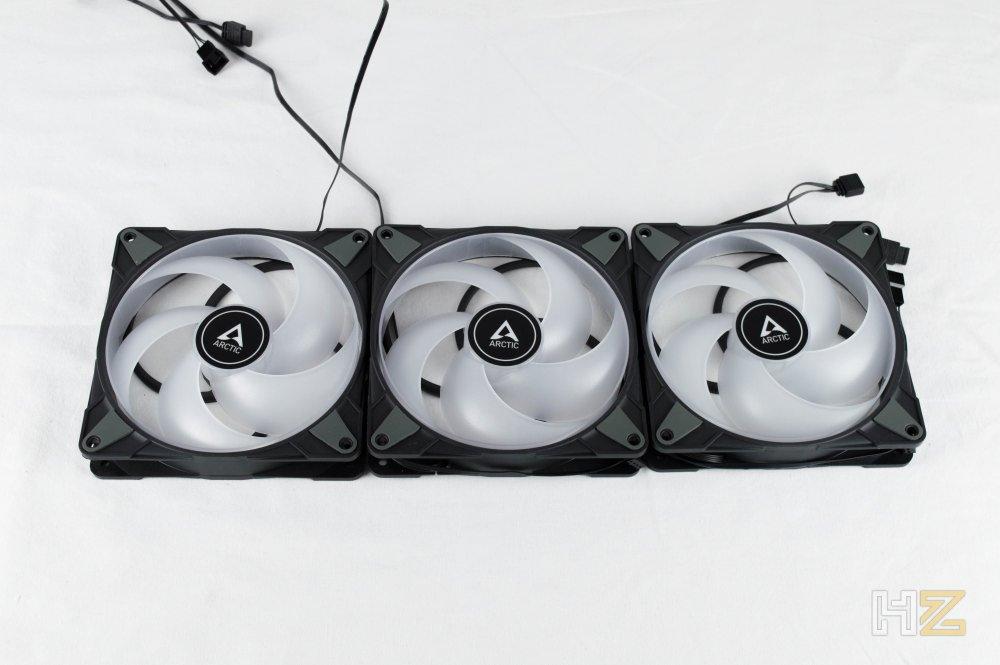 Let’s start taking a closer look at them by picking up a single unit. As you can see, these fans have only 5 very wide blades, something that will favor generating a large static pressure to the detriment of air flow. The blades also go units in their outer area to reduce vibrations and thus behave as a set when turning. 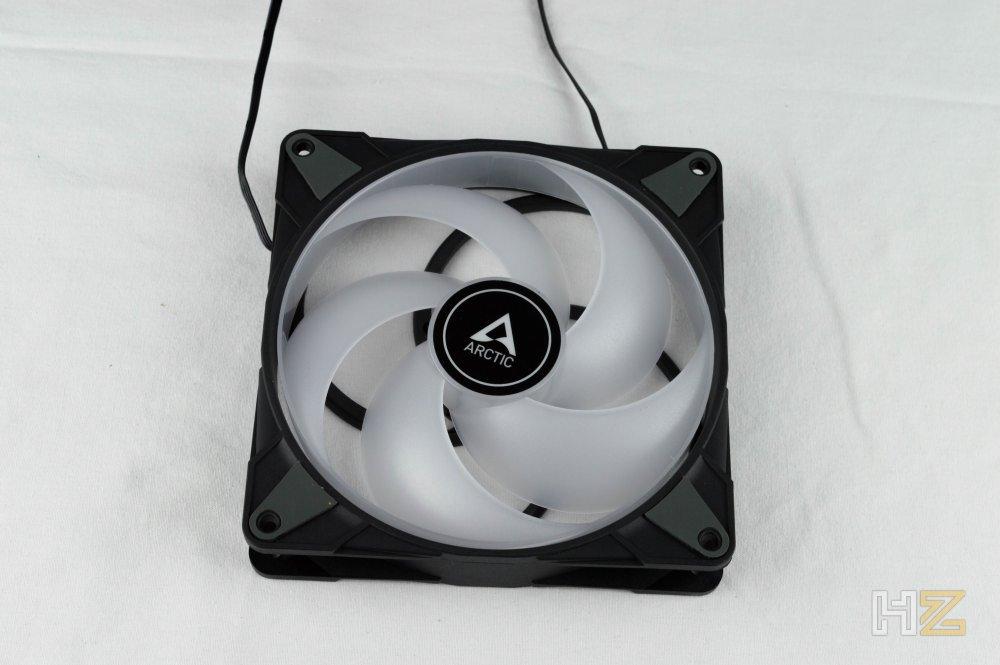 In all the anchors (on both sides) we have rubber inserts that will help reduce vibrations when the fan is running, and thus also the noise generated. 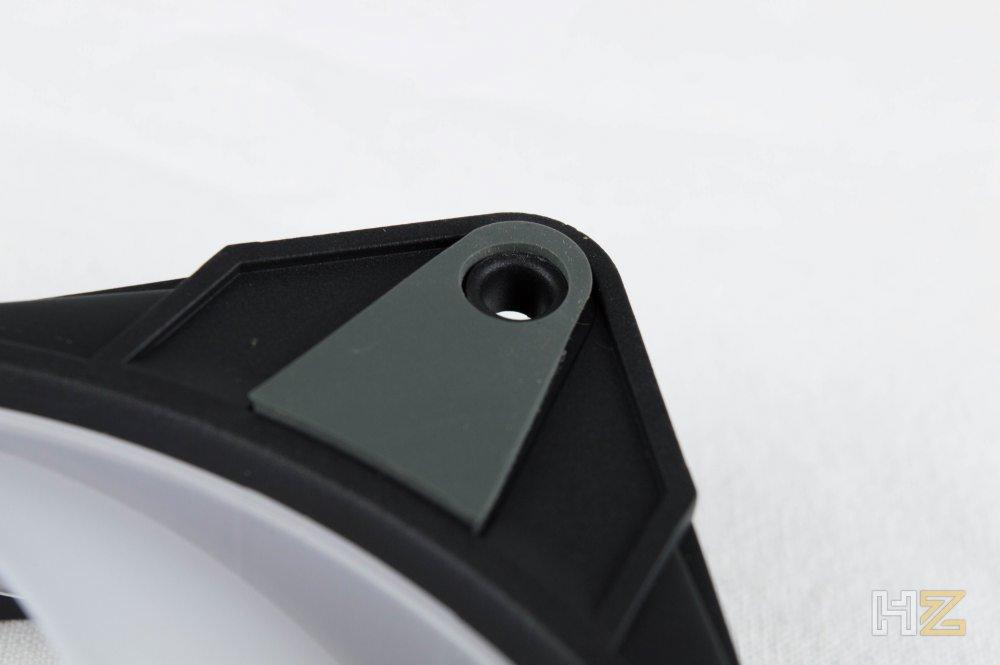 On the opposite side we can see that the rotor is fastened with four fairly fine plastic anchors and with the shape of the blades so as not to hinder the air flow. Something curious is that instead of putting a label behind the motor, Arctic has preferred to screen print the data of the unit directly on the plastic in which it is anchored, a quality detail that is appreciated because many times due to the heat these labels end peeling off. Finally, we must highlight a detail that we did not like too much, and that is that the two cables that each fan has (one for power and PWM control, another for A-RGB lighting) come from two different places, thus making it difficult to channeling once we mount the fans on the PC. 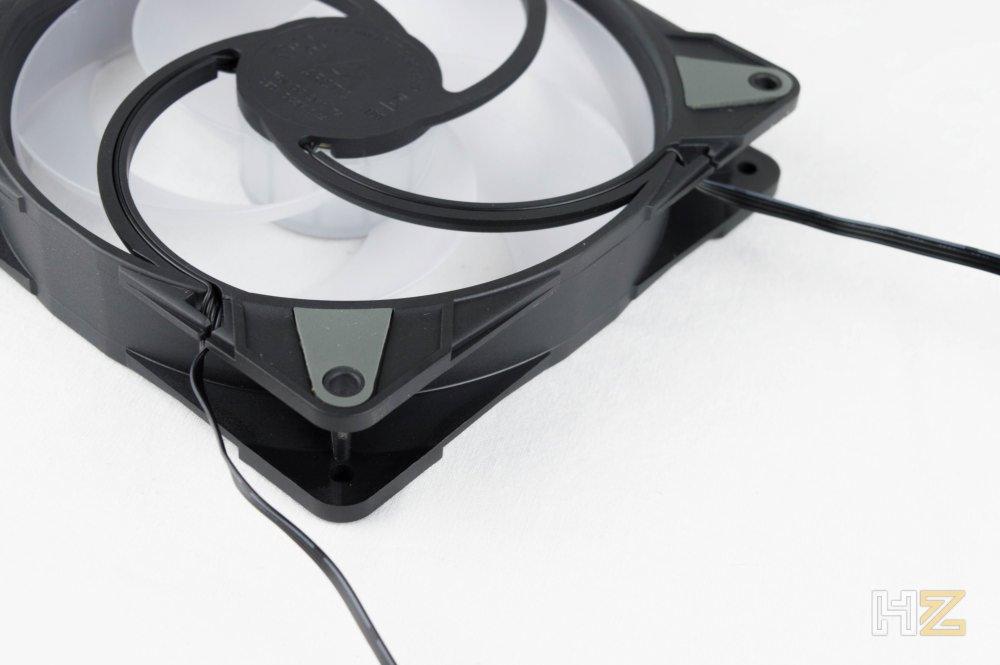 Of course, a detail that is appreciated is that both in the power and control connector and in the lighting one we have male and female, which means that we can connect all the fans in a chain and thus use only one PWM connector of 4 pins and another A-RGB on the motherboard to connect the three fans. With the fans seen, it’s time to plug them in to see how they look and how they work, so let’s get to it.

As we have said before, these fans can be connected in a chain and, therefore, an ARGB hub is not necessary as we saw for example in the Light Wings from be quiet! Therefore, the installation is quite simple both in the box and in the radiator, although it is true that as we have mentioned before the channeling of the cables is not so simple since they exit from different areas. 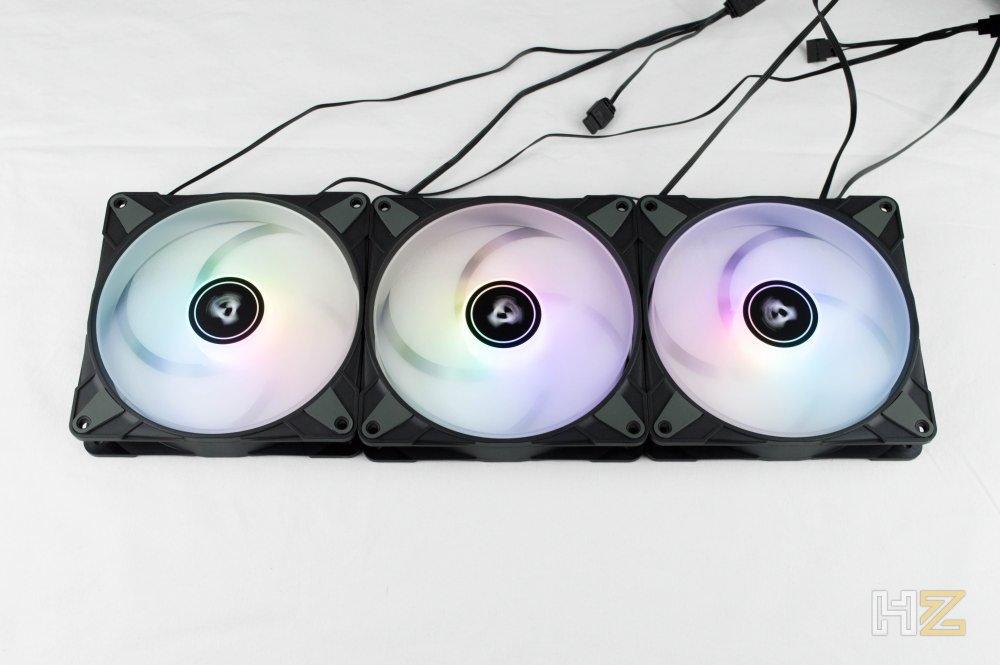 Initially we have mounted the fans “in the air” to be able to test their noise and airflow without restrictions, and at the same time to show you how their lighting looks. In the photo above you can see the fans in operation in bright conditions (with two white light bulbs of 2200W each pointing directly at them), and even so, the lighting can be perfectly appreciated; This is to give you an idea of ​​the great intensity of light that these Arctic fans generate.

The lighting configuration is as simple as in any other device that uses A-RGB lighting and that connects to the motherboard, and we will only have to install the motherboard control software to be able to configure its color and effects, as well as to synchronize it with other devices. 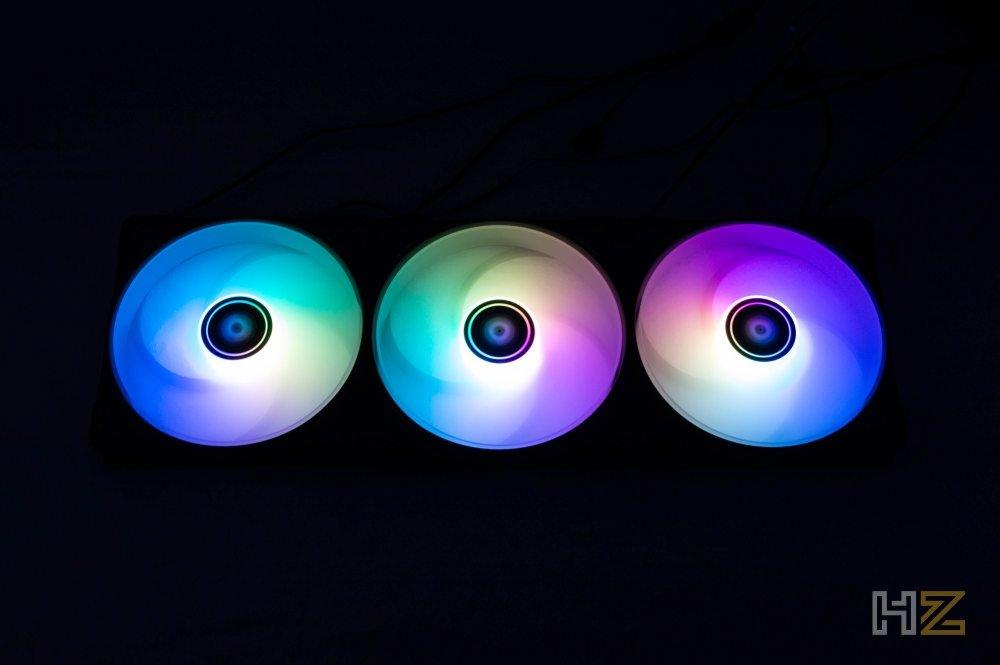 We have to admit that, of all the fans with lighting that we have tested to date, these have the most intense lighting (at the same level as the CORSAIR HD) and beautiful, very homogeneous at the same time. In bright conditions it looks perfectly, but with the light completely off they look impressive. 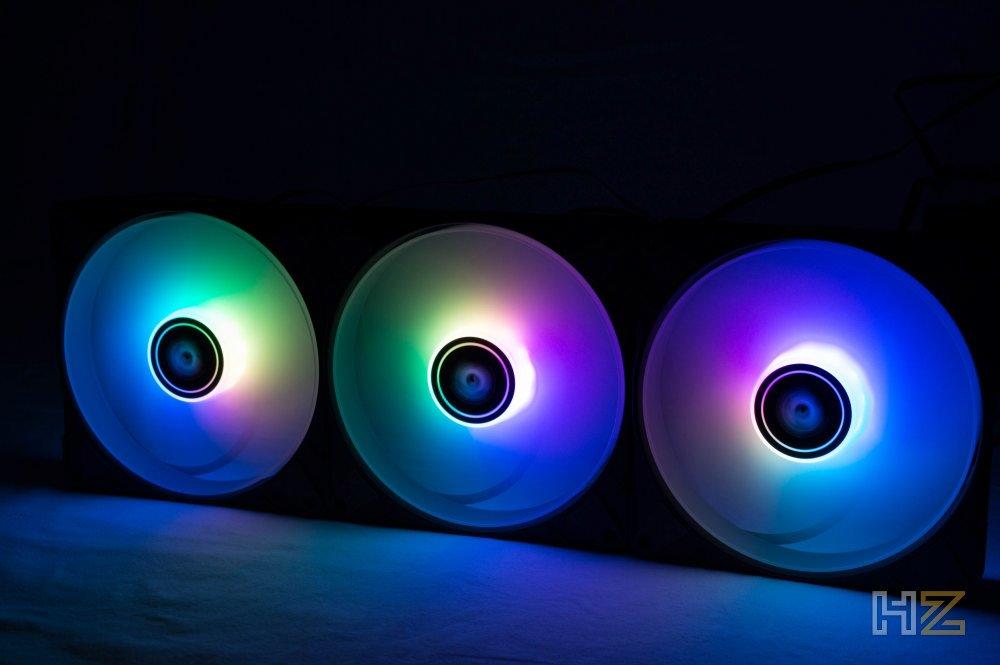 As we mentioned a moment ago, we have tested these fans in the air to measure their efficiency without restrictions, since otherwise it would depend on which box or in which radiator we install them. In addition, in this way we can make a reliable comparison with other fans that have passed through our test laboratory.

We start with loudness, for which we have used a Protmex PPM-SM001 sound level meter at an exact distance of 50 centimeters from the fans, just enough for the measurement to be given in dBA. We have made two measurements: one with the speed configured in PWM so that it is the board that dictates how they should work (this would be a real scenario of how most users would have them configured) and another at their maximum speed, with the following result : 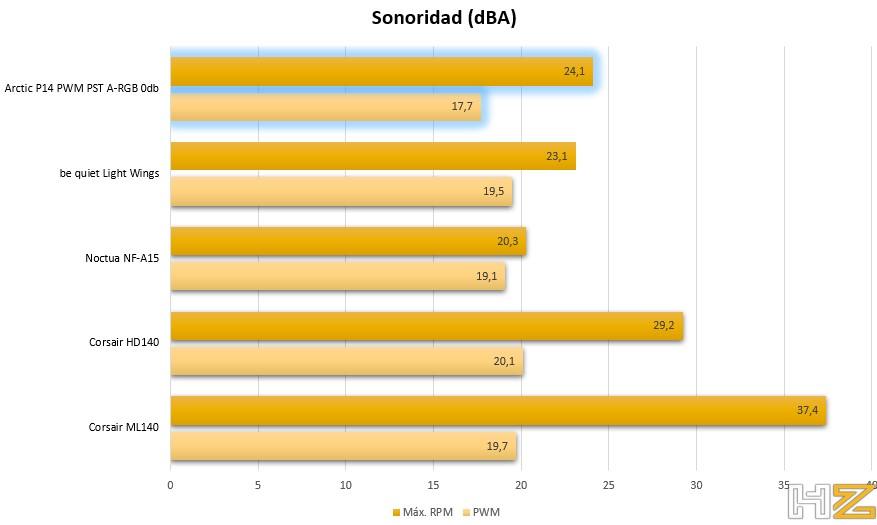 According to the technical specifications, these fans emit 0.3 sone, which corresponds to about 24 dBA and is precisely the measurement we have obtained. As you can see, even at high speed (1,900 RPM is not little and more in the case of 140 mm fans) the noise emitted is quite low, although higher than that emitted by other models such as the Light Wings from be quiet! since these only work at 1,500 RPM.

Of course, when we let the board control the speed of the fans, they gave us a data of only 17.7 dBA, but we have to say that the fans were off so the noise captured was basically from the rest of the components. from the test equipment or ambient noise from the room, which was completely silent.

To give you an idea of ​​what this means, in the following table you can find examples of the noise values ​​in dBA.

As you can see, the noise is lower than that of a whisper, something practically inaudible.

We are now going to see what air flow these Arctic fans deliver, and for this we have used a Holdpeak HP-866A anemometer. Again we have taken two data, one with the fan speed set to exactly 1,000 RPM and another at its maximum speed, in this case 1,900 RPM. 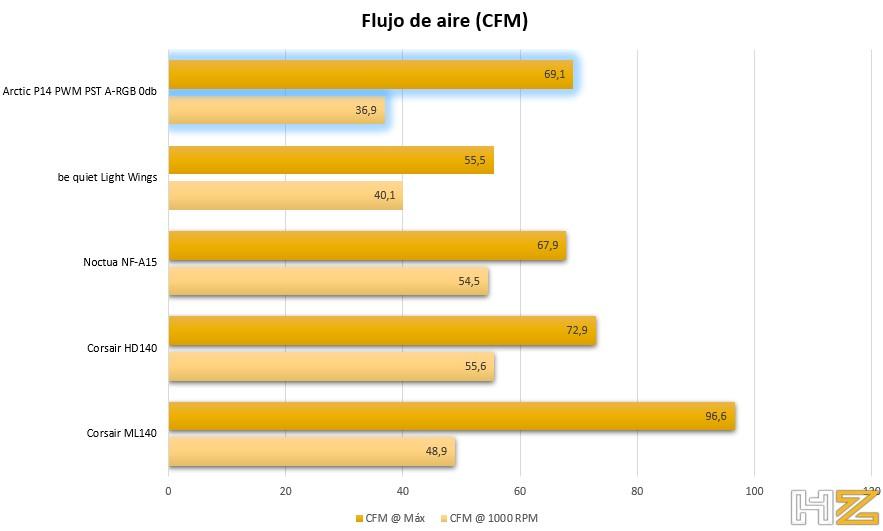 Just as we expected to see the arrangement and shape of its five fins, these fans do not generate much airflow and, in fact, only exceed those of be quiet! because they work at a higher speed (in fact you can see that at 1,000 RPM they are the ones that generate the least air flow). All in all, their 2mm / H2O static pressure is the highest of the fans we’ve tested and as such makes them ideal when installed in radiators or boxes that are heavily restricted to airflow.

Arctic is a specialist brand in PC cooling systems, and it is not for nothing that they have some of the best heatsinks and fans on the market. These P14 PWM PST A-RGB 0 dB are no exception, and focused on providing good performance with high static pressure but with the minimum possible noise level they have managed to fulfill their mission with an outstanding note.

As if this were not enough, we must highlight its excellent configurable A-RGB lighting, very beautiful and with a great intensity that makes it see even in bright conditions. In addition, it is remarkable the possibility of connecting all the fans in a chain (both the power supply and the lighting), so that we will only consume one connector of each on the motherboard. 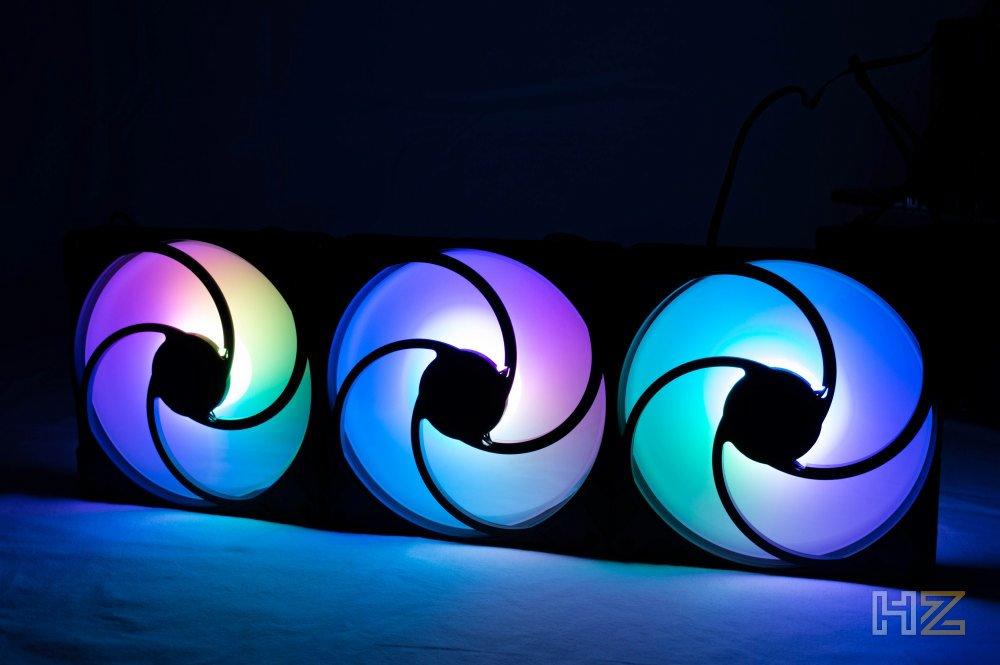 In short, we may not be facing the best fans on the market in terms of performance, but we are facing some of the quietest (and with semi-passive operation) and with the best lighting that we can find.

For all these reasons, these Arctic P14 PWM PST A-RGB 0 dB deserve our Gold award, as well as our recommendation for their design.