Why does error 0x800700aa appear in Windows Defender

This problem can appear for different reasons, but the main thing is that it is a corrupt file on the system. This usually causes errors when opening programs of this type and will prevent them from working properly. Therefore, this will be the first question to consider.

However, there could also be a problem at the software level, as we will see. Some security program that creates conflict, something that we have recently installed, etc. We will see what we can do to solve each one.

Corrupt files on the system

This can happen both with the system files as well as any program that we have installed. Conflicts are generated that prevent us from using the applications normally or that they do not even open, such as the fault 0x800700aa in Windows Defender.

Why does this appear? It can usually happen when we install a new version or have added a different plugin. For example a program that we have installed. It is something relatively common and that can affect all systems.

There is a conflict with another antivirus

Another problem that could also be the cause is that there is a conflict with another antivirus. Do we have another antivirus installed beyond Windows Defender? If for example we have Avast, Bitdefender or anyone else on our team, this can generate conflicts.

It is not advisable to have more than one antivirus installed. Beyond creating conflicts of this type, it could even become a security problem as neither of them is fully working.

Problem with an update

This cause must also be taken into account. Maybe the windows update stayed hanging. This happens after installing a new version and it hangs and does not finish the process as it should and will lead to crashes as well.

It may happen that we have lost the Internet connection in a moment or that the equipment has been turned off. This would result in the update not being completed and we would have problems of this type.

We have seen what are the main causes of error 0x800700aa. Now we are going to explain the steps we must take to solve the problem and get everything back to normal. This way we will get Windows Defender to run and not have bugs.

Windows has different built-in tools that help us solve problems. One of them is the SFC scan. Its function is to scan the computer for any corrupted files and fix it.

To use it we have to go to Start, look for Command Prompt and open it with administrator permissions. Later we have to put the sfc / scannow command and we execute it. It is a process that will last a few minutes depending on our team and right afterwards it will tell us what it has done and what possible errors it has solved.

Check that there is no other antivirus giving problems

Another possible solution is to verify that we do not have an antivirus that is causing a conflict. If we install any other security program Beyond Windows Defender it could give problems and that means that we cannot open it or its operation is very limited.

Have we installed any more antivirus? If so, we should uninstall it or at least stop it momentarily. Later we will test to see if this was the cause and the Windows antivirus works well. This is something that can happen with any antivirus and not just with Microsoft’s.

An also common reason is that there has been a failure to update windows. It is possible that the system has hung and this leads to errors when using different integrated programs, such as Windows Defender. What we are going to do is check that we have the latest version and, if not, update it.

We have to go to Start, we enter Settings and once here we will Update and security. We will automatically see when the last update and review was. Maybe we have something pending that was not completed, so we would have to do it manually.

Similarly, we can click on Check for updates and the team will check to see if there is a more recent version available. 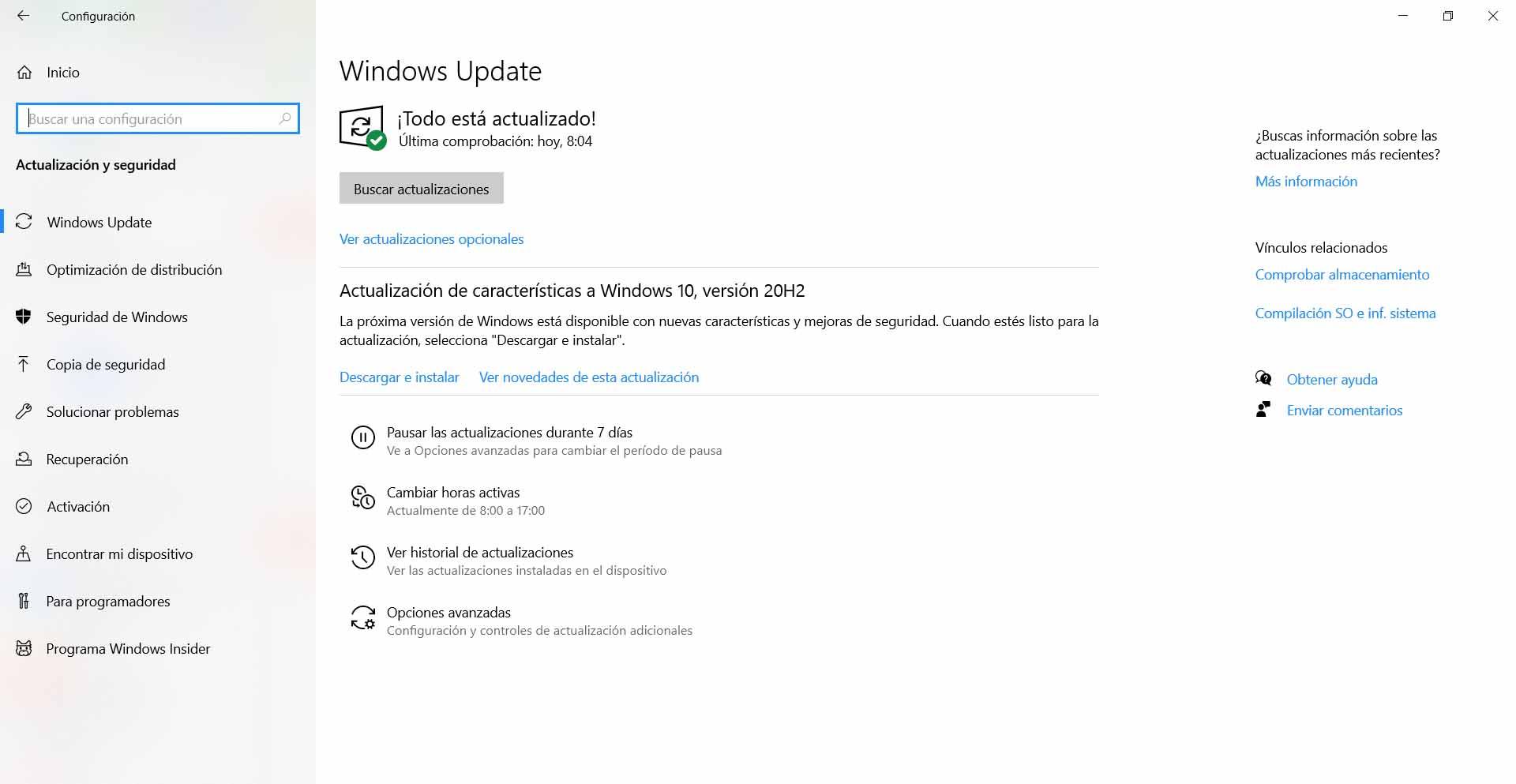 Maybe there is a software-level problem with Windows Defender. This will cause errors when you try to start it and you will get caught. We will have to do what we would do with any other program or service in which something similar happens: restart it.

For this we must deactivate it momentarily and reactivate it. We have to go to Start, write Windows Defender and open the security settings. We can also go to Settings, Update and security and enter Windows Security.

Once here you have to go to Protection against viruses and threats, Manage the configuration and uncheck the box Real-time protection. Later we re-enable it. This will force Windows Defender to turn on again and be able to fix certain glitches that appear. 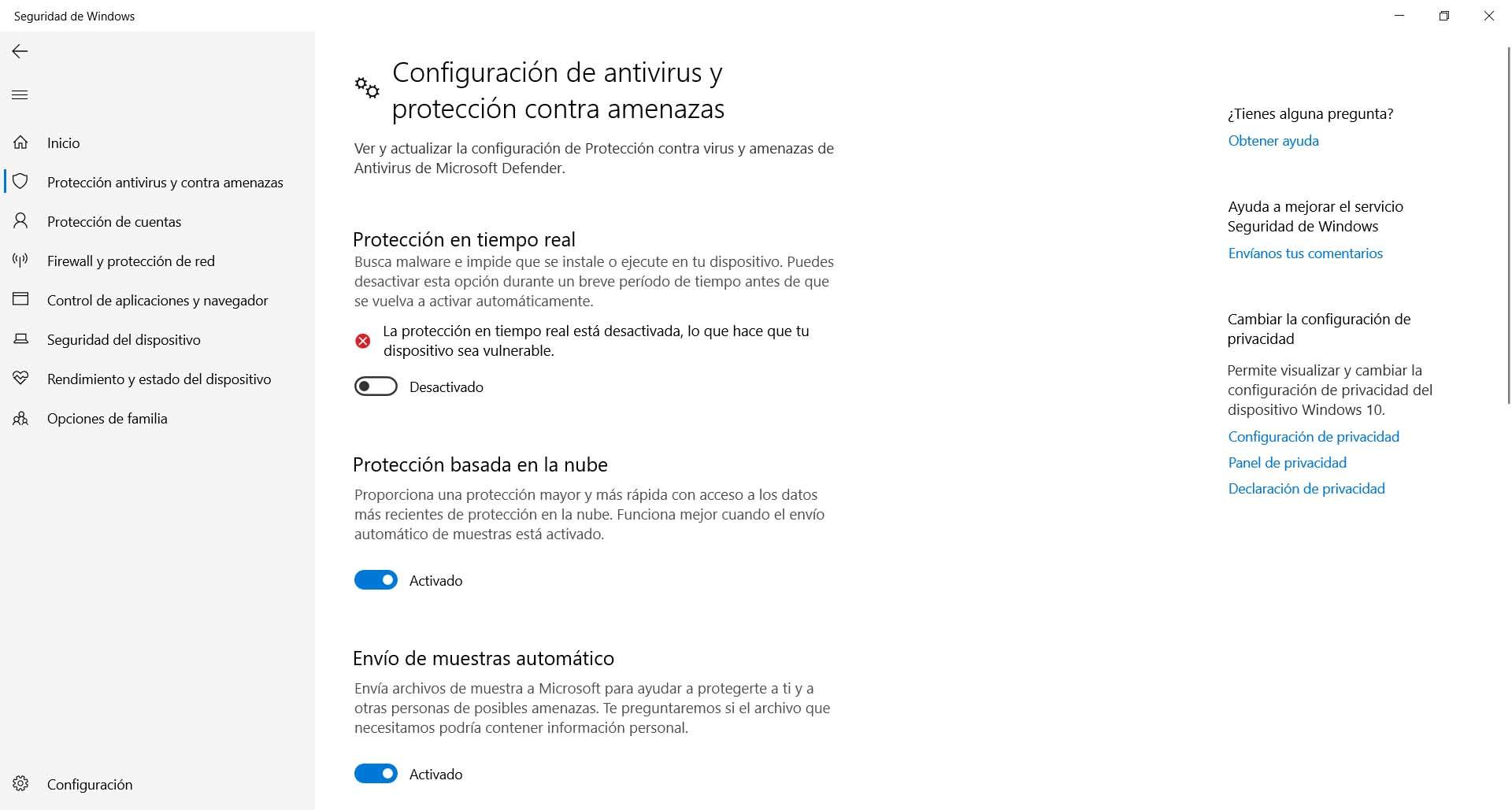 Verify that we have not installed something recently

Have we recently installed a program and may it be causing problems? This is another reason for this type of failure. We will have to see if we have installed any application, if it may be misconfigured, if in any way interferes with antivirus, etc.

The normal thing is that if this happens it is a fraudulent program. Perhaps a malware capable of blocking the operation of the antivirus. We must review this very well from the Applications section and uninstall any program that we suspect may be the cause.

In short, if we find the error 0x800700aa and Windows Defender does not open, we can take into account these measures that we have been seeing. A series of useful solutions that could help us to make Microsoft’s popular antivirus work as well as possible.

This is why your WiFi connects and disconnects continuously

Activate this Firefox function to browse with more privacy

How to reset Winsock in Windows and improve the connection