The James Webb Space Telescope is ready. NASA has given free rein to a scheduled launch on December 22 at 7:20 am EST, after engineering teams completed additional testing to ensure that last week’s headband problem did not damage any components. Fueling operations have started and will be completed on December 5. If no problems are found in the latest tests, the most expensive and complex unmanned space object in history will be launched on the eve of Christmas.

A very important launch for which he will have the honor of succeeding the already mythical Hubble, a gift for space exploration for three decades, but the results of which will pale if James Webb meets his ambitious goals: study the first stars and galaxies that formed in the early universe after the Big Bang; discover how galaxies evolved in early times; how stars and planetary systems are born in dusty clouds and the search for chemical fingerprints of life on satellites like Enceladus and the composition of exoplanets’ atmospheres, which could reveal biosignatures of extraterrestrial life.

When the space telescope takes flight thanks to the impulse of an Arianne 5 rocket, more than one will not be able to create it before the numerous delays in its construction and launch due to its great complexity and exponential cost increase over what was initially planned. There were threats of cancellation, political controversies and other tribulations, including the withdrawal of other minor projects from the space agencies in order to increase the budget of this ingenuity.

Not even the telescope’s name itself has escaped controversy, as groups of scientists accused the former NASA administrator of the same name of expelling gays and lesbians from their positions at the space agency in the 1950s and 1950s. 1960 and for this reason they asked to change the project. An extreme that NASA denied and the name remains.

The telescope has been built and will be operated jointly by NASA, the European Space Agency and the Canadian Space Agency under a project that began thirty years ago, shortly after the launch of Hubble. Your cost overrun has skyrocketed and the investment will rise to figures close to 10 billion dollars. In a few months we will see if it has been worth it, but shortly after it complies with Hubble, scientists hope to make the costs profitable. Astronomy fans are looking forward to it.

The James Webb it’s a colossal contraption. So immense, that we do not have space launchers ready to lift it to the skies and a part of its components will deploy once placed in its orbit. Everything on the Webb is huge and the so-called sunshade, in charge of protecting the whole and keeping the mirrors and scientific instruments at temperatures close to absolute zero, is the size of a tennis court.

And what about the 18 hexagons that make up the 6.5 meter primary mirror, almost triple that of Hubble. The telescope also has another group of secondary and tertiary mirrors to eliminate optical aberrations, and an additional direction mirror that can automatically adjust its position several times per second to provide stabilization to expected images of resolution and clarity never seen before. . 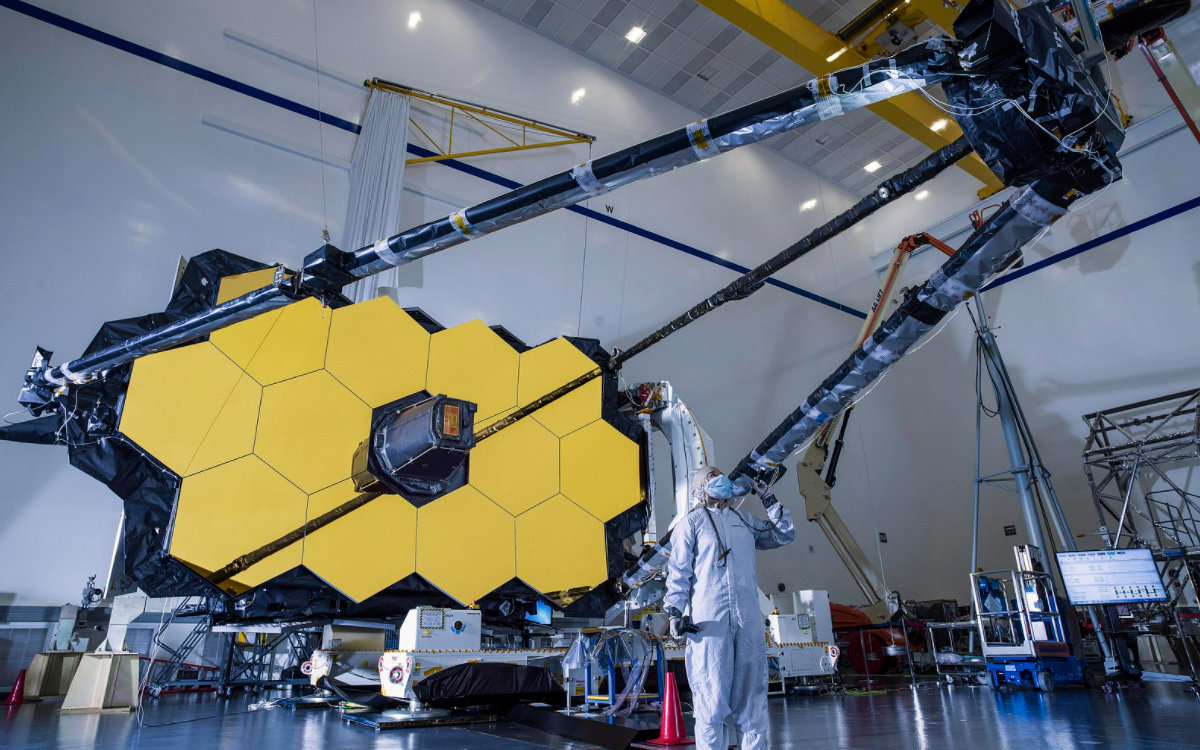 Furthermore, its suite of coupled state-of-the-art cameras, spectrographs and coronagraphs should be able to allow the observation of dimly lit objects near a star by blocking their light in a technique used to study the solar atmosphere.

It must be said that the telescope will work differently from Hubble and most ground-based telescopes, since it will not study the visible part of the electromagnetic spectrum. Conversely, observe the Universe in the near infrared and in the middle, at wavelengths longer than visible light. «There are many reasons for this«, Say astronomers. «Infrared is the perfect part of the spectrum for looking through dust to begin with, and that’s important because stars and planets form in dusty regions. So if we want to understand where and how other solar systems are being created, the James Webb should provide us with crucial data.«.

In addition, the atmospheres of planets that could contain chemicals such as methane, a gas associated with biological processes that could indicate whether they are capable of supporting life, are also best studied by collecting infrared radiation. Taking into account that light becomes weaker and redder the further back in the Universe you look until its wavelength reaches the infrared part of the spectrum, «if we want to study how the first stars, black holes and galaxies formed, we need an infrared telescope«, They explain. 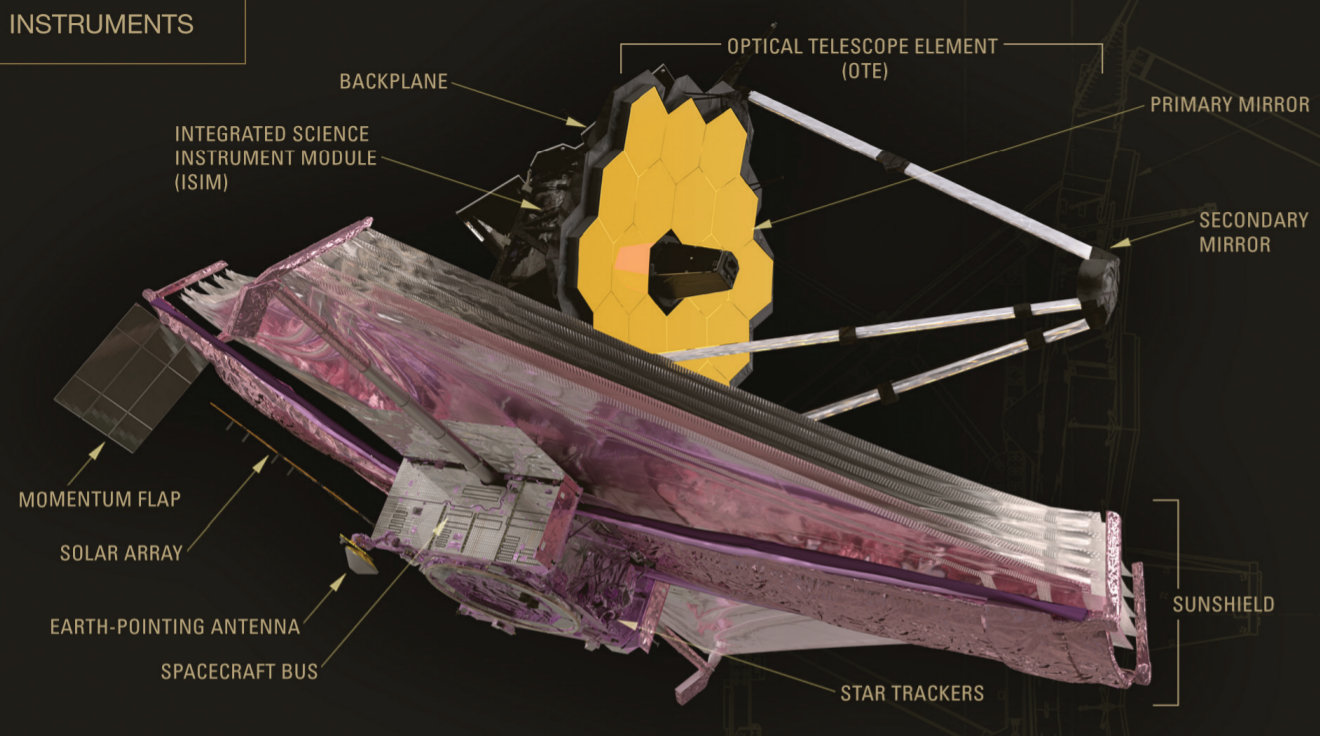 Ground-based observatories can operate at these wavelengths and some do, but placing our eyes above the Earth’s atmosphere, which blocks much of the infrared radiation that reaches us from space, It is a huge level jump to meet the objectives that NASA has remembered: «You will explore every phase of cosmic history, from within our solar system to the most distant observable galaxies in the early universe and everything in between. Webb will reveal new and unexpected discoveries and help humanity understand the origins of the universe and our place in it.«.

If its development and construction have been full of vicissitudes, there are still problems to overcome until the James Webb operates at full capacity. Arianespace, the service provider for the launch of the telescope, has an Arianne 5 rocket ready in French Guiana to take it into the skies. The rocket has made 111 takeoffs since 1996, 106 of them successful. Furthermore, its failures occurred early in the rocket’s development. But every launch has its risks. 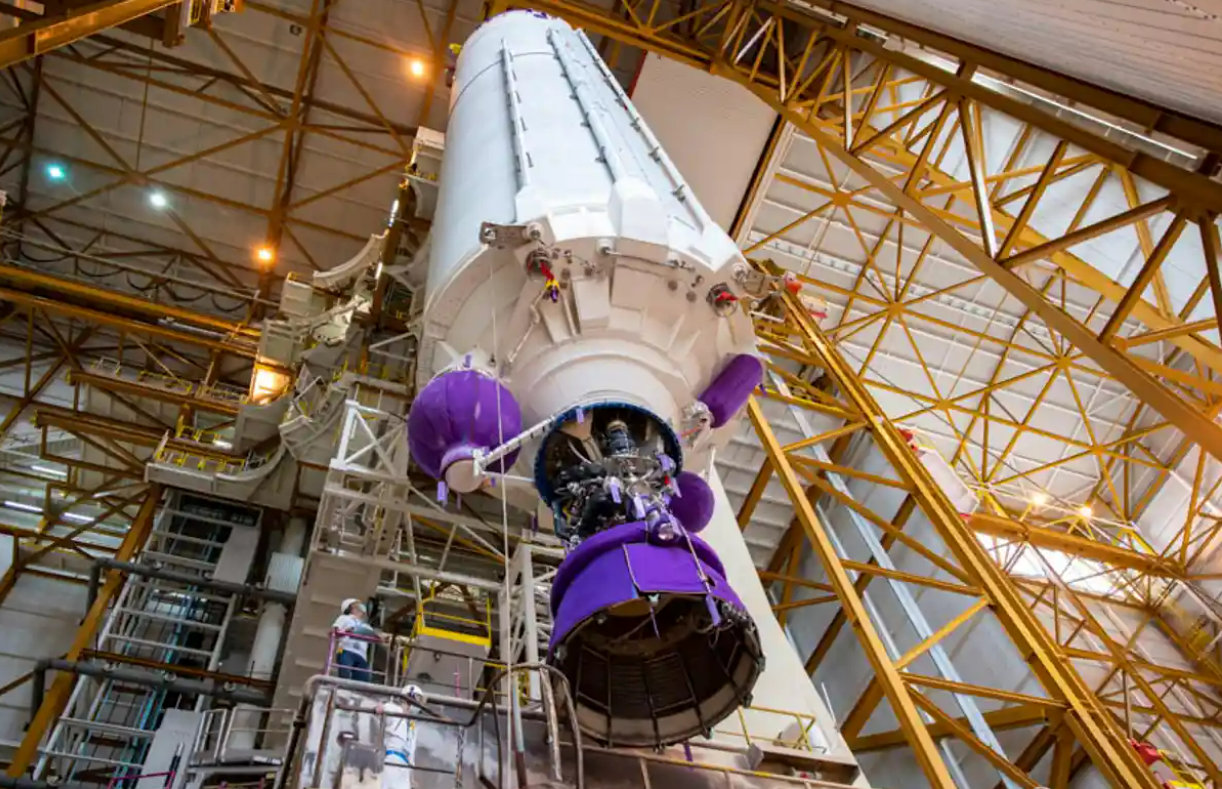 And once launched there are other aspects to overcome, since the telescope has been designed to work without any prospect of practical help from humans. Contrary to Hubble, which, located in low Earth orbit, has received several repair and service operations, some of them critical, in situ, by the shuttles and their astronauts, which, if they had not been carried out, would have left Hubble practically finished.

And it is that the Webb will be launched directly into a precision transfer orbit at the second Lagrange point (L2) between the Earth and the Sun. At a distance of about a million and a half kilometers it is an ideal point for space observatories In addition, it will be easier to keep James Webb cool since it has been designed to operate around -233 ° C so that his instruments do not generate false heat signals that would complicate the reception of infrared radiation coming from the edge of the Universe.

And the deployment of its components will still be lacking. On its months-long journey home to Lagrange 2, the telescope will slowly unfold components as it navigates through space. The first will be the huge sheets of aluminum foil, as thin as a wafer and as large as a tennis court, which will act as giant umbrellas, the large parasol. 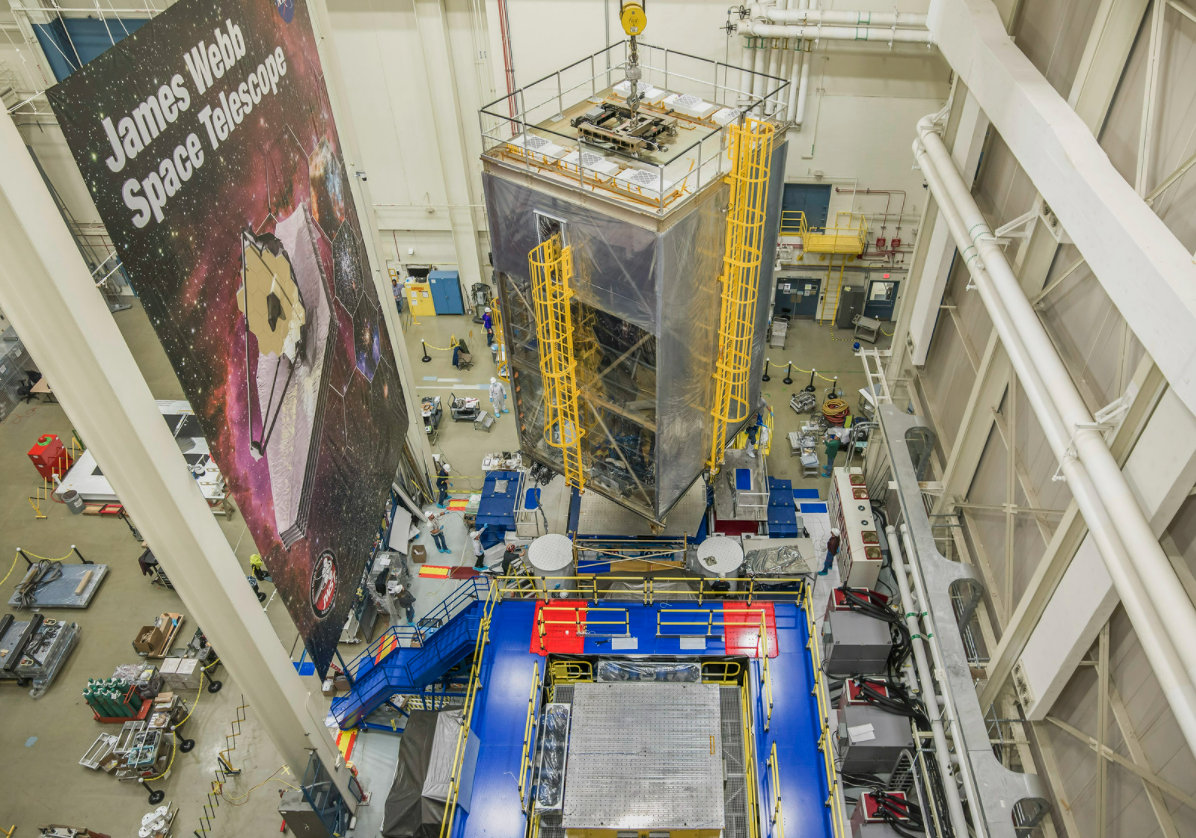 The next to appear will be the main mirror of the James Webb, the heart of the telescope that will collect infrared radiation from the entire universe. Seven times bigger than the Hubble mirror, it is simply too big to fit as a single element and hence its 18 hexagons that will unfold like flower to flower and automatically join together.

Those two components are the main ones, but there will still be others to activate. Everything that has to do with this display, this unprecedented automated self-assembly, it will have to work perfectly because human help in practice will not be possible. The whole process will take around six months to complete and only then will we find out if it’s one of the tech triumphs of the 21st century or a dollar-eating disaster.

Accomplishing goals, as spectacular as obtaining images of the first galaxies that formed after the Big Bang, entering the star-forming clouds or studying exoplanets, will have to do it. in just about ten years, less than a third of Hubble’s lifespan. After, it will stay out of fuel and will not be able to stay in position on L2. Then it will drift off course and become the most expensive piece of space junk ever built.

Another big telescope project to get underway must be the Magellan (Giant Magellan Telescope or GMT). It’s a spotting scope which will have the ability to study stellar light that passes through the atmospheres of nearby exoplanets, giving information on their composition. TIt will have seven 8.4 meter mirrors that will be combined to create a colossal eye 25 meters in diameter. It is being built in Chile. Two others of its kind (terrestrial) will be even larger, the Thirty Meter Telescope in Hawaii of a international consortium and the Extremely Large European Observatory which will also stand at and measure 39 meters. Neither are replacements for James Webb.

Beyond the ground-based telescopes, the project that points the most interest is the Nancy grace roman. Initially known as WFIRST (Wide Field Infrared Survey Telescope) it’s a space observatory designed to unravel the secrets of dark energy and dark matter, as well as the search and visualization of exoplanets, collecting infrared radiation like James Webb. 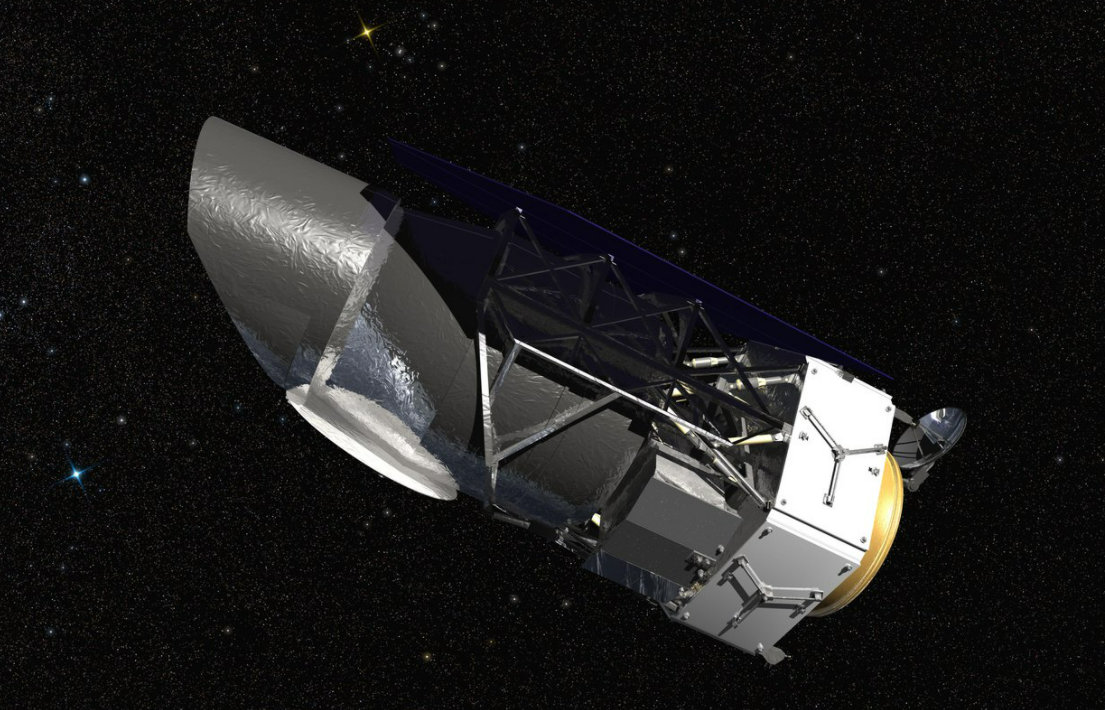 It will be launched in this decade sharing space with the James Webb, but it will be more powerful and the first that will truly allow scientists accurately search for water, methane, carbon dioxide and other gases that indicate the presence of biological activity, proving the existence of other worlds outside the Solar System with the capacity to host life. Surely that great dream of the human being is still far away, but ever closer.

Wireless speakers for the beach, crime or necessity?

Whatsapp: this is what the emoji of the face covered in clouds means