Google Chrome 100 has just been released in the stable channel for all platforms where it is available, Windows, macOS, Linux, Android and iOS.

A round version, three digits, reached 13 years after launch of a web browser that today leads the global market share by a long way over all other options and helps its promoter to dominate the market for online search and advertising.

And it is that since it surpassed Internet Explorer there is no one who ‘coughs’ Google in this field and Chrome is one of the most valued and used applications of the company. In addition, Google’s influence on web browsing has increased following Microsoft’s decision to use Chromium, the open source base used by Chrome (and other developments).

The triple digits arrive in the stable channel with a new, subtle and slightly refreshed icon, more tools for web applications, removal of ‘lite’ mode on mobile, preparation of closing user agent strings, improvements in closing tabs and other minor news, along with the usual bug fixes and inclusion of the latest security updates. We summarize them:

new icon. Although it may not seem like it at first glance, Google Chrome 100 has a new icon for the first time since 2014. As you can see in the image below, it is not a big change. Some shadows have been removed and others flattened for a simple look. The tones of the colors have also been subtly modified (which will apparently improve the contrast) and the gradient is less pronounced. The new icon will roll out to all platforms, but will vary a bit to better blend with each platform.

Use with multiple screens. Google has released a new API that will help web applications detect when we use multiple windows on different screens on the desktop. Among the use cases, Google cites a slideshow that could be displayed on one screen while speaker notes are displayed on another screen, a financial app, a medical imaging app, creativity apps, and others. Native apps have been able to do all of this for a long time, but web apps have struggled, and now comes an improvement.

user agents. User agent strings tell websites what type of device and operating system we are using. While that information can be useful, it is also personal and can be used to create a profile about the user. Google Chrome 100 will be the last version to support “unreduced” user agent strings. Instead, there will be strings of user agents with reduced information to sites and a new API that will cause fewer incompatibilities with websites.

mute tabs. Google removed years ago the ability to mute a tab simply by clicking the speaker icon. It’s a feature that Chrome released and today it’s a feature that other browsers have, including Microsoft Edge. Fortunately, Google is bringing it back and will add it by default in future updates. You can enable it already with the flag chrome://flags/#enable-tab-audio-muting.

Data saving. Chrome for Android and iOS has long included a “Lite mode” to save data. Google will start shutting down the servers responsible for that data compression and the feature will be removed. Google says that it has already included other improvements to minimize data usage and valued the decrease in the cost of mobile data in many countries.

More news. Other new features include a confirmation popup to close all tabs at once in Chrome for Android and an API to manage digital products and in-app purchases from web apps. The release includes 28 security fixes of all kinds including the emergency patch that was released last week (also for Edge) to address a high severity 0-Day vulnerability. There are also quite a few improvements under the hood, which developers will be able to use.

How to install Google Chrome 100

If you are a new user or want to do a clean install, you can download Google Chrome 100 from its website. Google will update the versions already installed, but if you want to do it manually it is as simple as accessing the three-dot menu and clicking Help > Google Chrome Information. When you restart the browser you will already have this three-digit version installed. 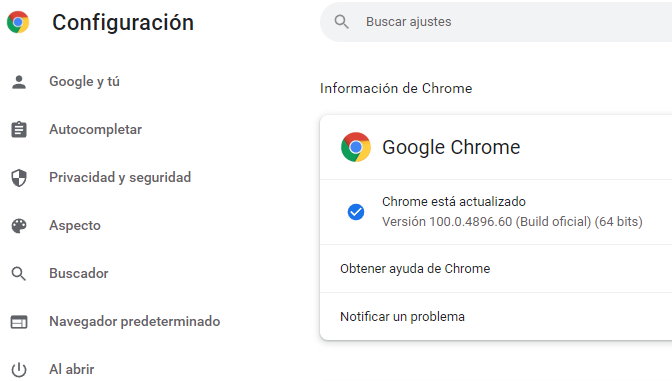 You will be able to check it in a welcome window where Google takes the opportunity to present the news of the version and some usage tips, as well as in the configuration page where you will always be able to see the version you have installed.

How To Enable Auto Restart On Samsung Galaxy A30

Electric cars: only 16.2% of European charging stations are in France

The Game Awards 2021 seeks to surprise with a giant list of announcements and news.