The complete list of the new generation of Intel graphics cards, including their first dedicated in more than 20 yearshas appeared in the latest driver that the chip giant has published in beta phase.

Surely – like us – you are disappointed that the new Intel Arc Al graphics cards are no longer available as the necessary animators of a market where there is a lack of inventory, plenty of speculators and excessively high prices. Once its delay is confirmed and a distribution model that will start with OEMs in China, we can only hope that the company can truly compete with NVIDIA and AMD in performance, cost and number of versions.

We already have the answer to the latter. In the absence of the official announcement of the entire line, the driver “Intel Arc Graphics Windows DCH Driver – BETA 30.0.101.1732” published this weekend includes information of the supported models and here are some known as the first presented for laptops and many others that had not appeared until now:

As expected, Intel will produce graphics chips for all market segments in which it has business, including the Arc for laptops, for desktops (A770, A750, A580, A380 and A310) and also the professional ones for work machines, Arc Pro A40/A50 and A30M. Intel Arc, just like the general Core-series CPUs, will be available in three versions. Entry-level chips will be included within the Arc 3 (A3); the mid-range ones in the Arc 5 (A5) and the higher performance ones like the Arc 7 (A7). 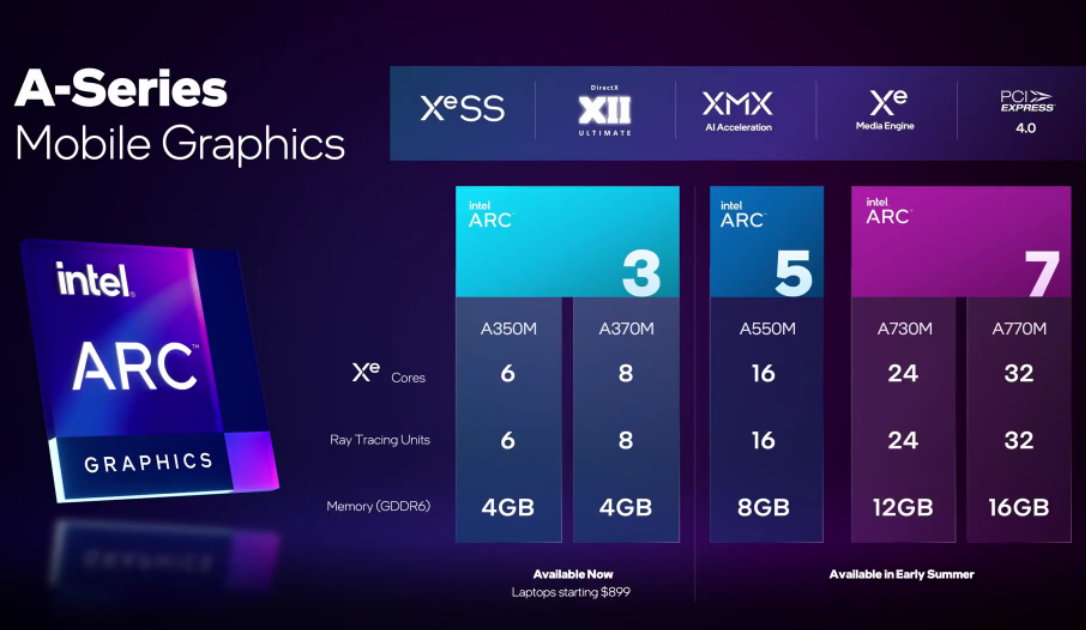 There are no known prices or availability for the consumer desktop versions, surely the most anticipated along with the limited edition versions.

We have more specificity about the premiere of the graphic rescaling technology (Intel Xe Super Sampling) created to compete with NVIDIA’s DLSS and AMD’s FSR. These types of image enhancement technologies (just like ray tracing) have been key in the graphics war in recent years by providing an enhanced visual experience.

According to the developers of Massive Work Studio, this technology will be released on May 20 with a patch for the third-person action game Dolmen. Intel will offer it for current integrated graphics such as Xe LP-based integrated graphics, discrete Iris Xe MAX and of course for Arc Alchemist that we hope will be on the market soon.

Evercade VS, a retro console worthy of arcade games rooms