We all use strips of one type or another to plug in our beloved PC, since it is not only the PC plug that we need, but we also have to plug in the monitor or monitors, and in many cases also other devices such as speakers, printers, the router or even to charge the mobile phone. Generally this is not going to overload the power strip, but what if you don’t realize it and plug in a vacuum or air conditioner and it overloads?

How much power can a conventional power strip hold?

The power that a conventional power strip supports from those that you can buy in any store can vary a lot, since it depends on its design, the number of plugs it has and other factors, but the most normal thing is that even the worst power strips can support up to 2,200 watts peak power. Talk about peak power It means that they are not designed to withstand this energy consumption continuously, but only at specific times, so this is a factor that you must take into account and be careful with it.

As a general rule, all the power strips have a label at the bottom in which they will specify, among other things, the power they support (you can check it by looking at whatever you have in your house, all models except the worst quality must specify this value) but again you must bear in mind that we are talking about peak power and not continuous power. You should also bear in mind that this value will always be a guide, which means that it would be absurd to calculate the power of the connected devices since it is an approximate calculation.

Other higher quality power strips (and more so the protection strips) tend to have a much higher peak supported power value, and the ranges go from 3,500 watts in the strips that already have a certain quality. up to 4,800 watts or even more in very good quality devices and protection strips.

Reasons for an overload on the strip 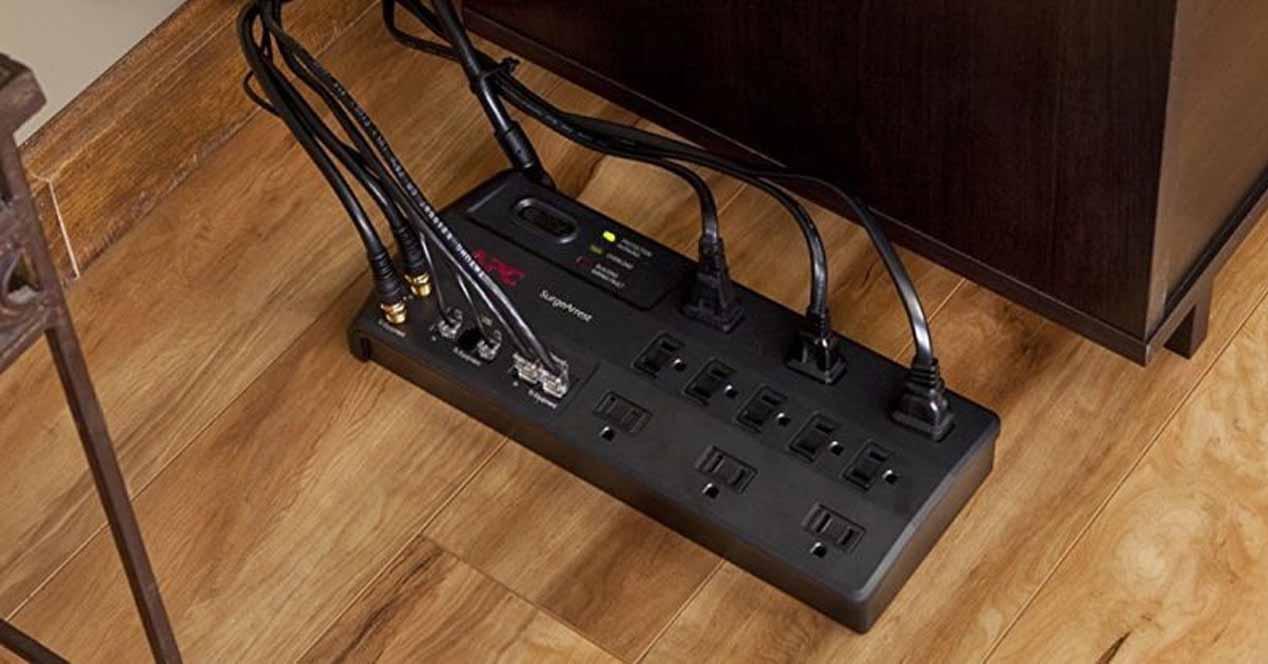 A power strip can become overloaded for various reasons, and despite the fact that most people think that it is simply a sum of the consumption of the connected devices, this is actually a bit more complicated. But yes, indeed, if you plug in the PC and its peripherals and a vacuum cleaner that consumes 2,000 watts to a power strip that supports up to 2,200 watts, an overload will surely occur (for this reason we recommend that you never ever plugs high-consumption appliances to the same strip as the PC).

And it is that oddly enough, if a strip has, for example, six plug sockets, it is designed to support six devices, and this is valid even for protection strips. If you connect a plug thief to a strip or even if you plug one strip to another in series, you can also cause an overload in this one since they also have a maximum limit of current intensity supported per socket, and this is something that generally also comes specified on the label.

For example, imagine that you have a conventional power strip that on its label says that it supports up to 3,500W but also says that it supports 250 volts and 16 amps; This amperage supported is per plug, and if you were to use a strip connected to another or a plug thief in a single outlet and connect devices that exceed those 16 amps, you would be causing an overload (that’s why you should never ever connect one power strip to another, nor should you use a plug thief on a power strip).

Hardware connoisseurs will now say that pc power supplies they withstand much higher amperages, and in fact some exceed 100A on their + 12V rail, necessary in many cases to power high consumption graphics cards. Wouldn’t this cause overload? The answer is no, because the electricity from the plugs in our houses is alternating current and those Amps of the power supply are direct current, which is what the PC needs to work, and it is the power supply itself that It is generating that intensity of current from the alternating current that comes from the wall socket.

What happens to the PC if the power strip is overloaded? When an overload occurs in a power strip, the first thing that will happen (or at least should happen) is that the leads of your house jump, that is, that the protection system of the home’s automatic trips. Generally, in an average home we have 3.3 KW of maximum power contracted and if we exceed that level, the leads will jump and “the light will go out” before the power strip becomes overloaded due to excess consumption. However, this is not always the case (it depends on many factors, such as the state of the electrical installation) and there may be serious cases such as the example image that we have put above, in which the strip literally burns or melts from the heat.

In any case, an overload on the power strip should not damage the PC because all power supplies have protection systems both against overloads and against short circuits and voltage surges, so in case of overload these systems should be activated and, although They will cause a sudden shutdown of the PC, they will prevent any damage to its components.

Now, if you had a normal power strip and not a protection one (or a UPS), it may have consequences, not on your PC directly but on other plugged-in devices such as the monitor, the router or the printer for example, and for this reason it is especially interesting to have protection strips and, preferably, a UPS to safeguard the integrity of your precious appliances in the event of electrical problems.

AMD’s next portable processor will also renew its graphics

Eliminate problems with clicking the mouse on the desktop