Intel is returning to the GPU segment with its Arc Alchemist line. We were able to test the Arc 380, the new model dedicated to the entry-level market which wants to provide a correct experience for a mini price. Does the Californian brand keep up with its competitors, namely Nvidia and AMD? Answer right away!

When we think of gaming GPUs, we think of two brands in particular: Nvidia and AMD. The duo leaves little room for competition but a third player intends to interfere in a mousehole: Intel. The brand is releasing its new range of graphics cards and today, we are interested in a particular model: Arc 380.

Intel is no novice in this area. The oldest certainly remember its cards in the early 2000s. In recent years, the brand has mainly relied on its Iris Xe eGPUs, which provide a graphic boost to its CPUs, but no more. With its Arc Alchemist series, Intel wants to come back to the fore. It consists of several products (Arc 770, 750, 580, 380 and 310) and today, it is the A380 model that passes through our columns.

With this product, the goal is clearly not to compete with the behemoths of the market such as the RTX 3080 or the RX 6900 XT, since we are on a “budget friendly” product. The objective is to walk on the flowerbeds of the GTX 1650 and the RX 6400, safe bets for small configs. Is the Arc 380 the ideal compromise for those who want to play serenely in 1080p without breaking the bank? Could it become the new entry-level benchmark? Answer right away. 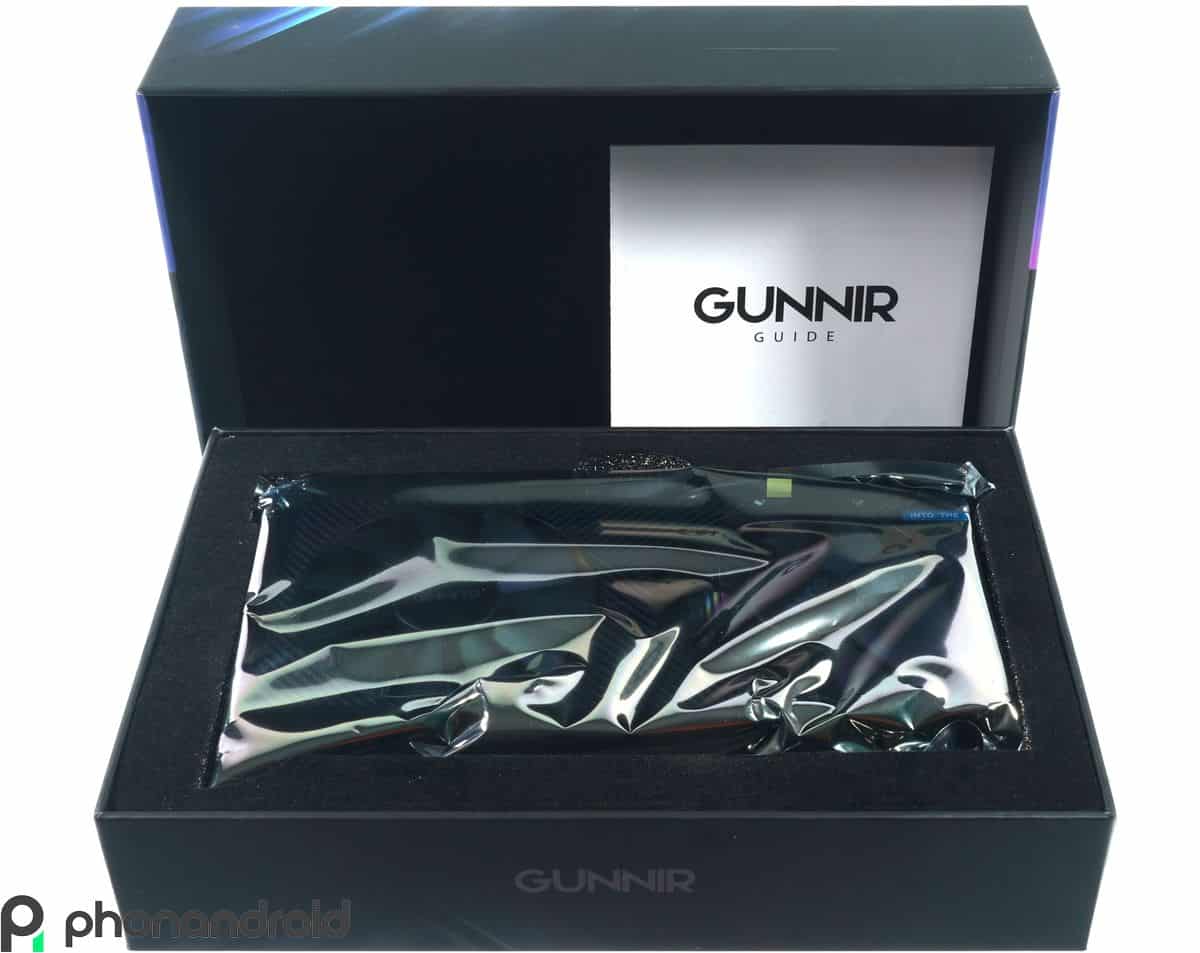 Note that we have here in test the custom model of GUNNIR, Arc 380 Photon OC. A representative version of what Intel seeks to bring to the PC.

The Arc 380 Photon OC is not yet available in France at the time of writing these lines, but only in China. It should be arriving at our house in the next few weeks. 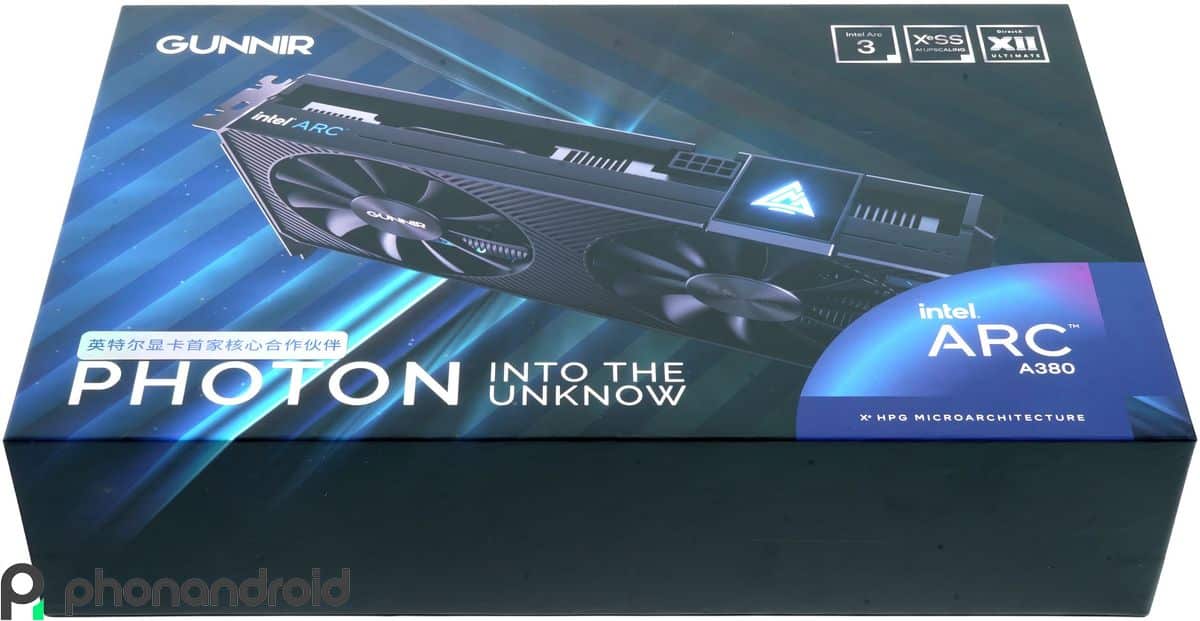 It is sold for 1299 yuan on the Chinese market, or about 190 euros. The usual taxes will certainly have to be added to this. It will in any case be sold around 200 euros, which places it in the same price segment as its direct competitors, namely the AMD RX 6400 and the Nvidia GTX 1650. We must now determine what would push the consumer to turn to this Arc 380 rather than the other two.

Some details about the test

As is often the case with hardware, this test is carried out in collaboration with our partner across the Rhine: Igor’s Lab. All our data is therefore common. The benchmarks were performed on a config consisting of an MSI MAG Z690 TomaHawk motherboard, an Intel Core i9-12900K processor, 32 GB of dual channel RAM and a Be Quiet power supply! Dark Power Pro 12 1200W. 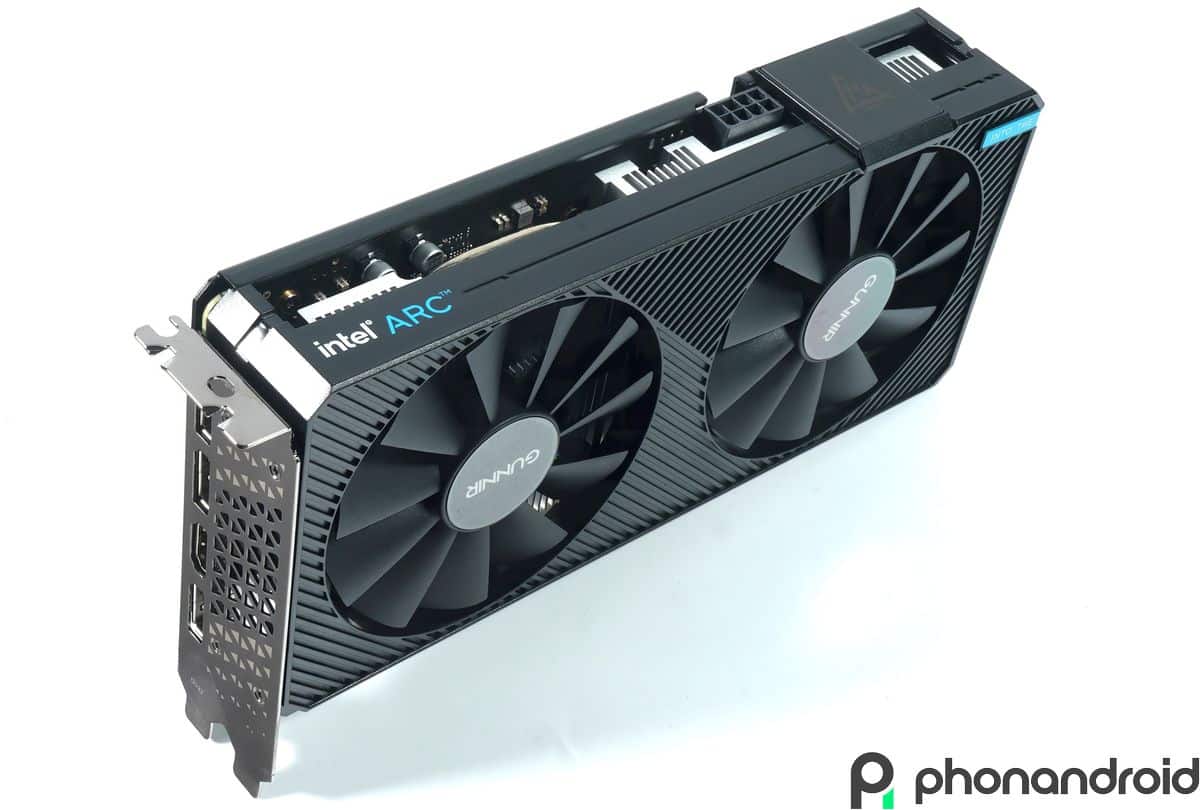 The test data was therefore obtained using the Arc 380 coupled with an Intel CPU. In our tests, performance is much lower with an AMD Ryzen CPU. Worse still, some games like World War Z even refused to launch. It could be that some microcode included in Intel CPUs is required for the board to work properly, but we can’t swear to this. This could all be fixed with an update but for now, it’s best to assume that pairing the Intel card with a Ryzen processor is best avoided.

Finally, before getting to the heart of the matter, it should be noted that this Arc 380 does not bring any particular technology to the user (such as DLSS, ray-tracing, SAM or VRS, terms associated with new AMD or Nvidia cards). We have a GPU that wants to cut to the chase.

The GUNNIR Arc 380 is a modest graphics card. It embeds an Alchemist GPU (Xe-HPG DG2 architecture) engraved in 6 nanometers with 128 calculation units. It has 6 GB of GDDR6 VRAM and a 96-bit memory bus. There is also a TDP of 75 Watts.

A card that seems modest on paper and at the level of its direct competitors. Now only remains to know if it keeps its promises in game.

A usual design that goes everywhere

On its FE models, Nvidia pays particular attention to the design in order to offer a product that is pleasing to the eye. This is not the case with Intel, and by extension of GUNNIR (remember that we are testing a custom model). 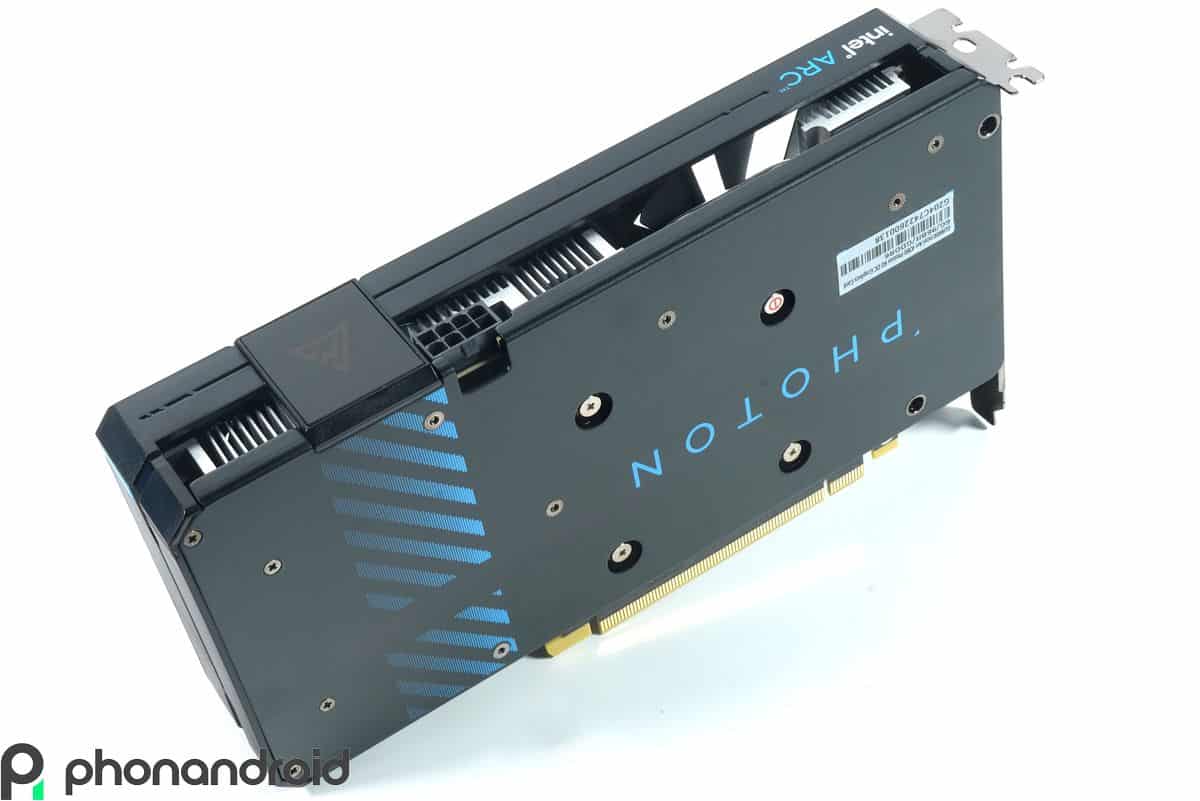 Indeed, the Arc 380 goes straight to the point with an all-purpose design without any real ambition. Everything is usual there. Visually, there is an electric blue Photon printed on the top as well as a small blue border on one of the edges (addition of GUNNIR), but nothing more. 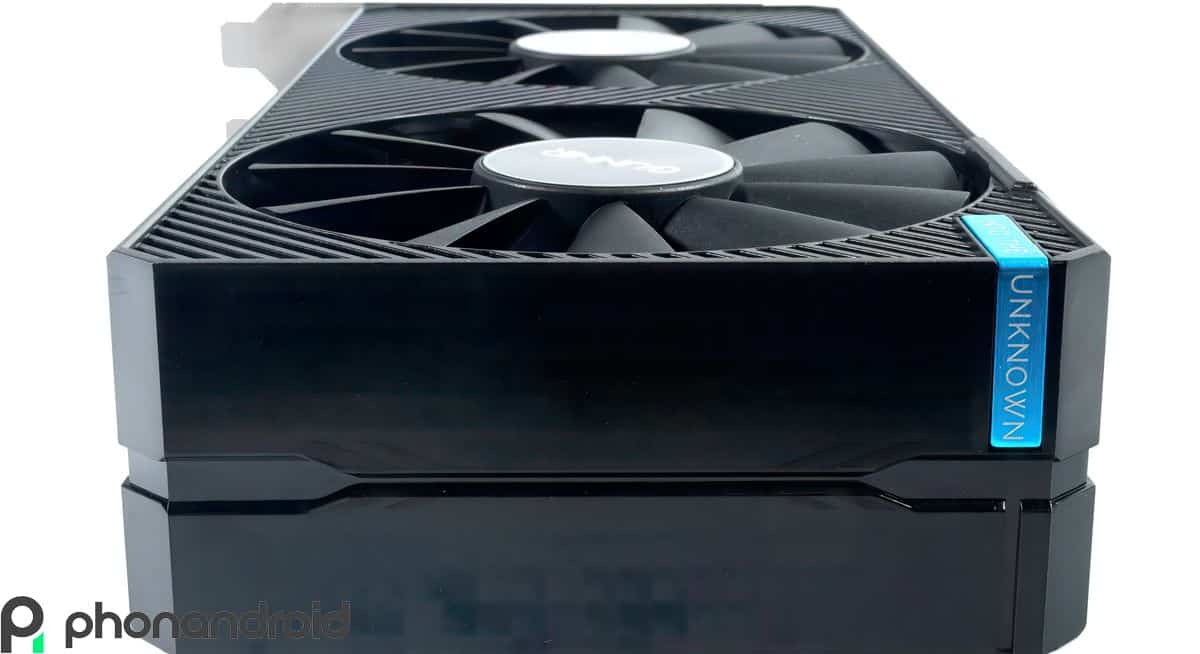 It’s not really a default, but a choice. After all, a graphics card is made to be included in a case. 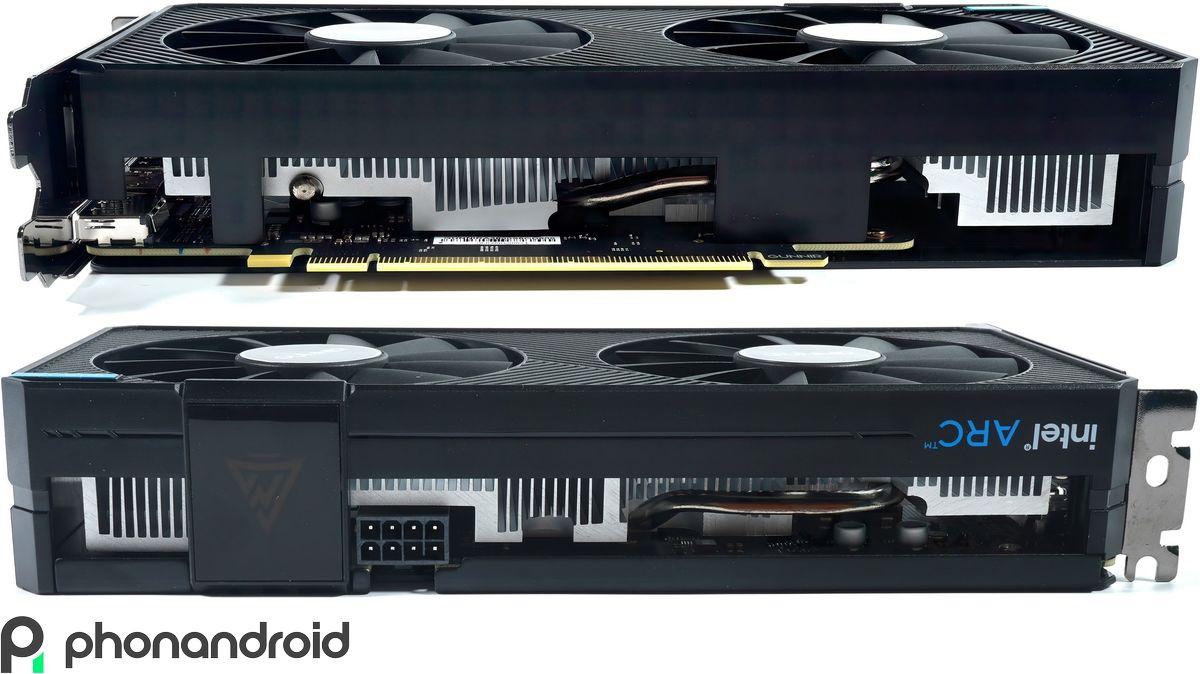 The card adopts dimensions of 22.2 x 10.8 cm and weighs one kilo all stack. What catches the eye are of course the two fans. They are both 9 centimeters and are made of 11 plastic blades which are not of high quality. Inside, we find an aluminum block and a long heat pipe that winds its surface, enough to ensure the cooling system.

On the connector side, we note the presence of an 8-pin PCIe connector to provide power. At the back, we have an HDMI 2b port as well as three DisplayPort 2.0 ports, enough to connect several displays. nothing original, so. 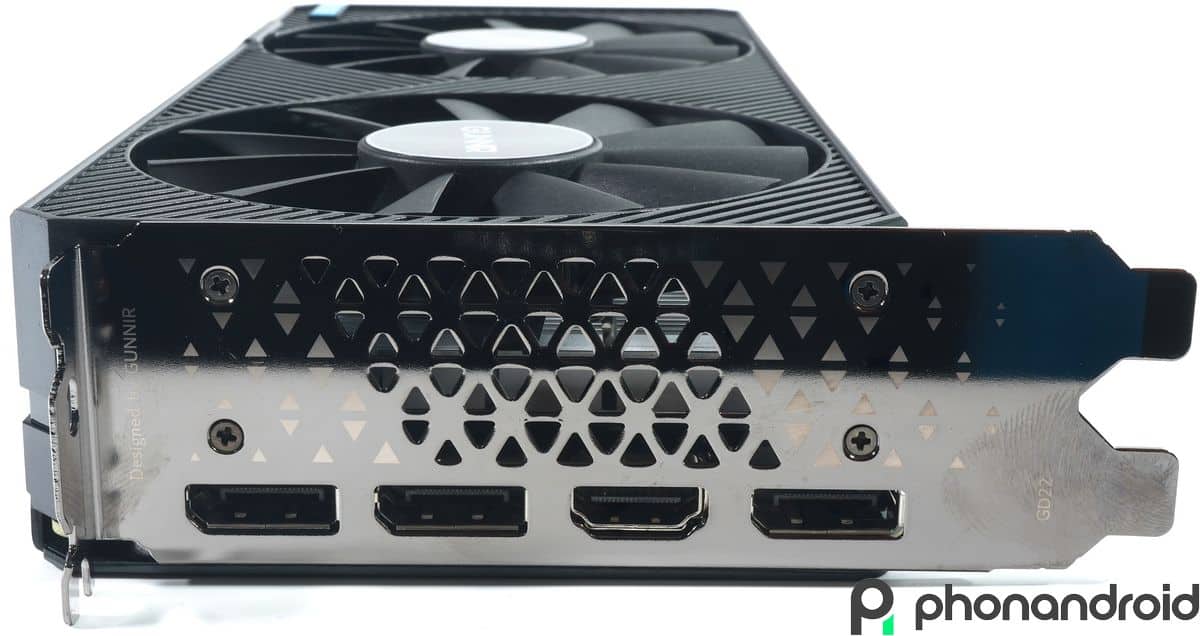 Decent in-game performance, but not a game-changer

Now it’s time to get to the heart of the matter: in-game performance. After all, that’s what we’re here for! Intel’s promise is to provide a powerful and inexpensive video game card, but above all to offer a real alternative to the competition. So we are definitely expecting something better. 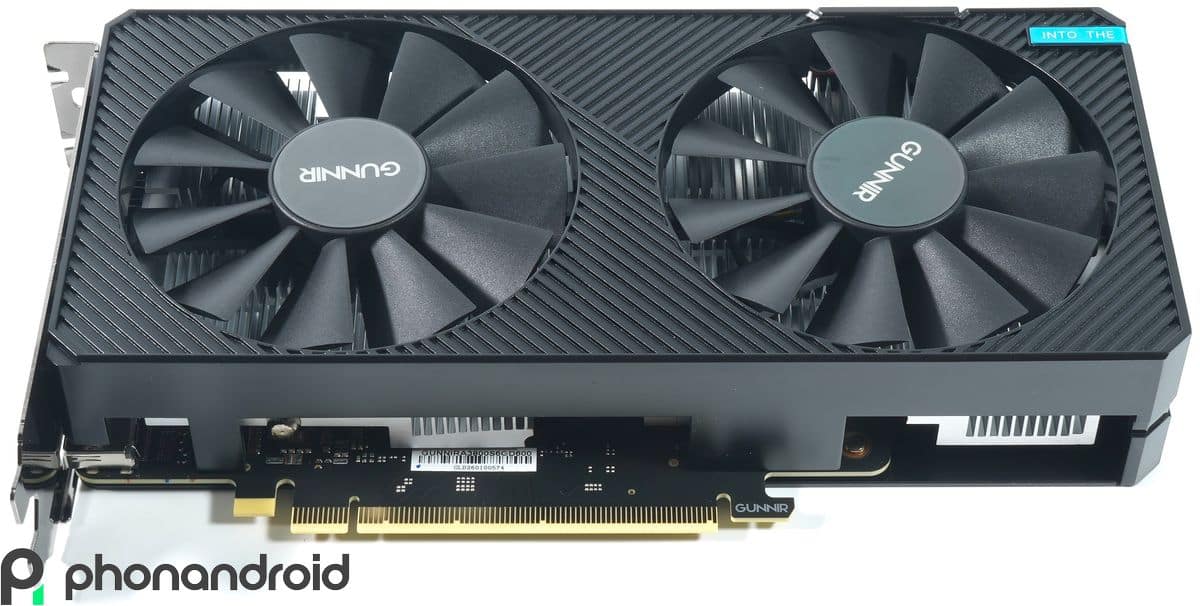 Several things should be noted. First, we performed our benchmarks on specific in-game sequences so that all cards are on an equal footing. The tests have been done in 720p and 1080p, with each time the graphics set to the minimum, the conditions that buyers will face. We compared this Arc 380 to the Radeon RX6400 and the GTX 1650, its direct competitors, but also to a whole range of older cards in order to have a more global view of performance. Some graphics, however, are composed of only three GPUs, since on some titles, the old cards have too much trouble keeping up.

Read also – AMD RX 6900 XT test: AMD does not break the house with its high-end card

Finally, it should be noted that it is possible to overclock the Arc 380 up to 100 Mhz (base frequency of 2450 MHz). Everything is done via Intel’s Arc Control Center software downloadable from the official website. This allows to have better performance, to the detriment of consumption and heating. The measurements made in this mode therefore have their place in the graphs.

On the game in 720p, the Arc 380 brings interesting results. Thereby, it almost always outperforms the GTX 1650 in terms of pure performance (except on Shadow of the Tomb Raider), but is constantly knocked out by AMD’s RX 6400. 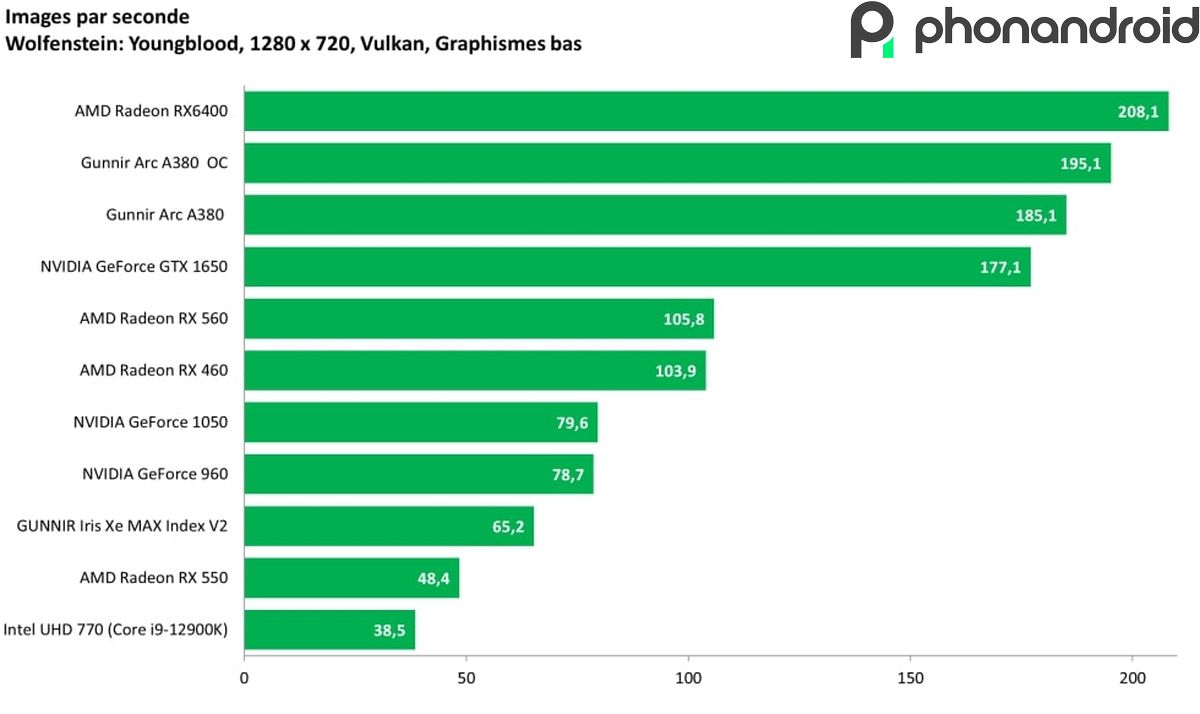 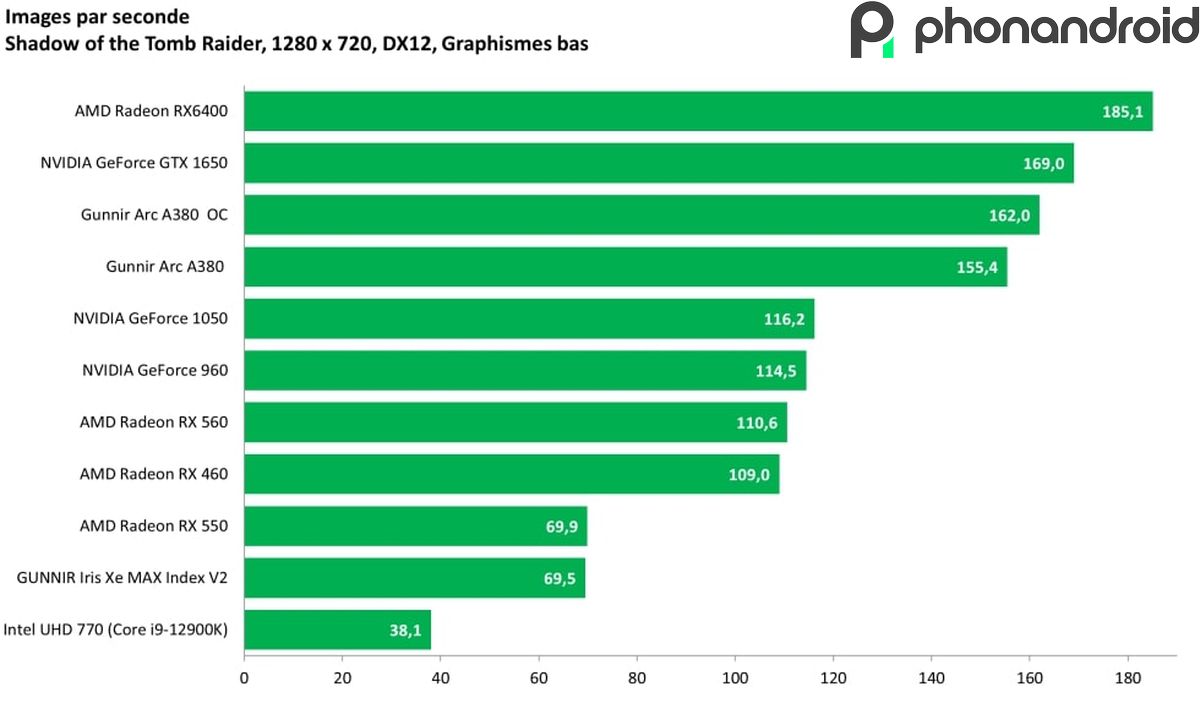 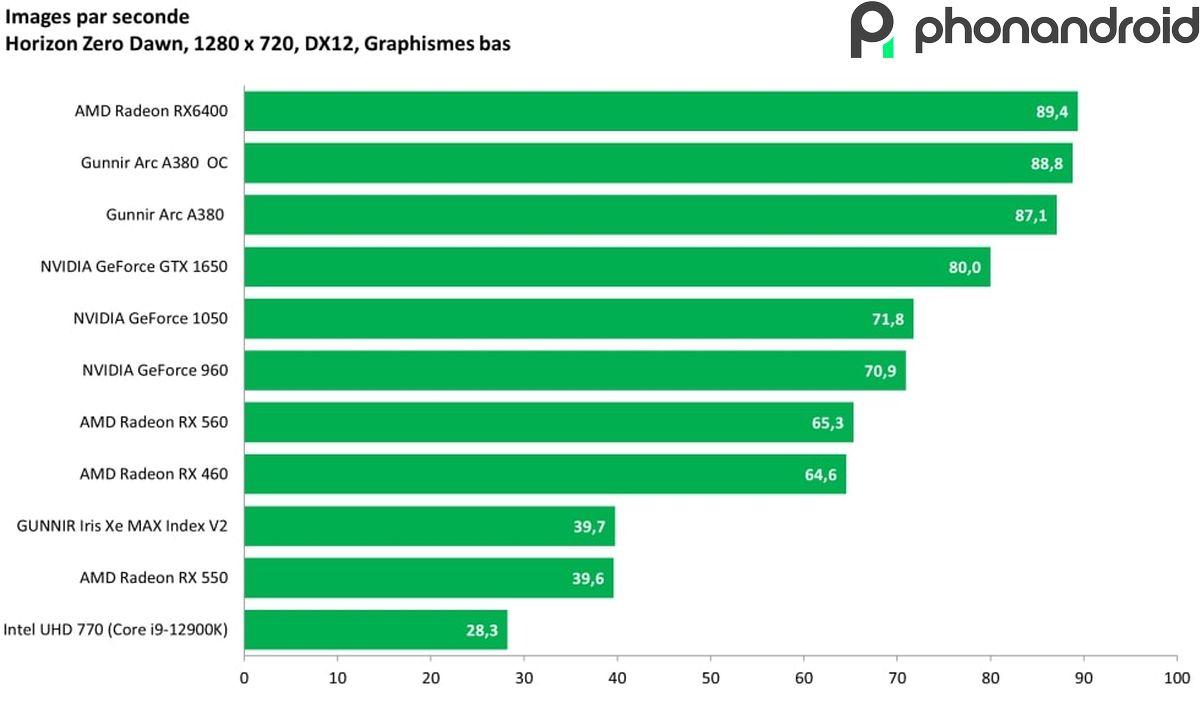 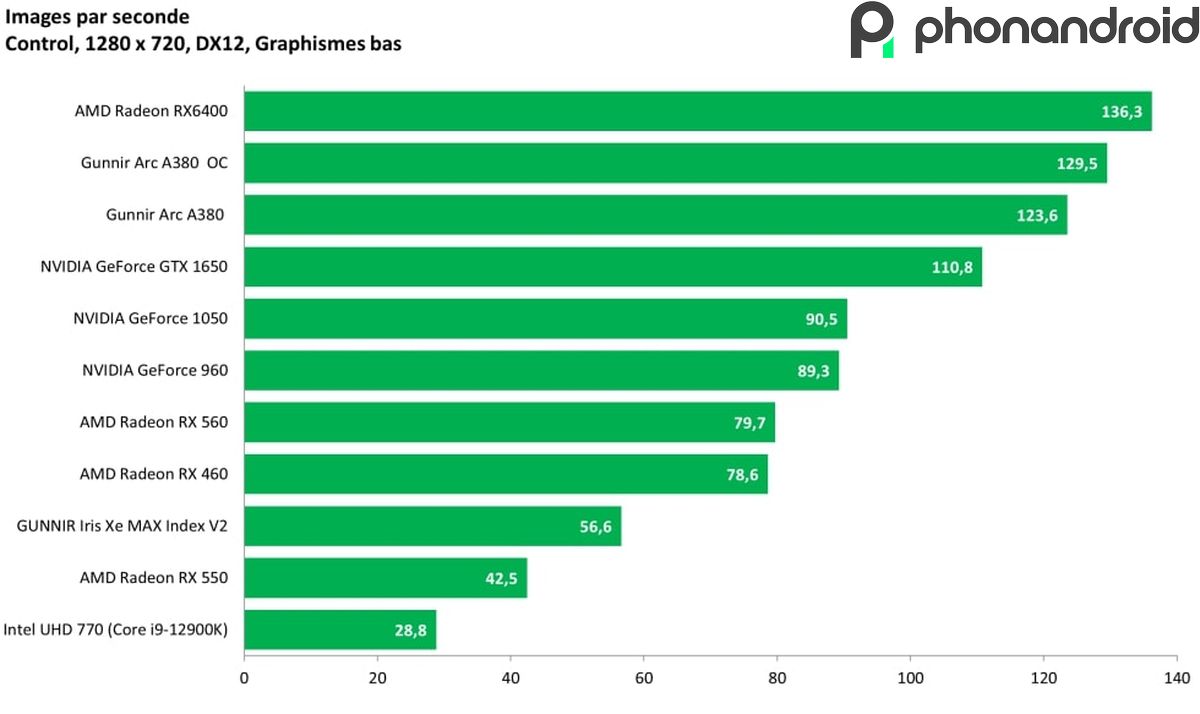 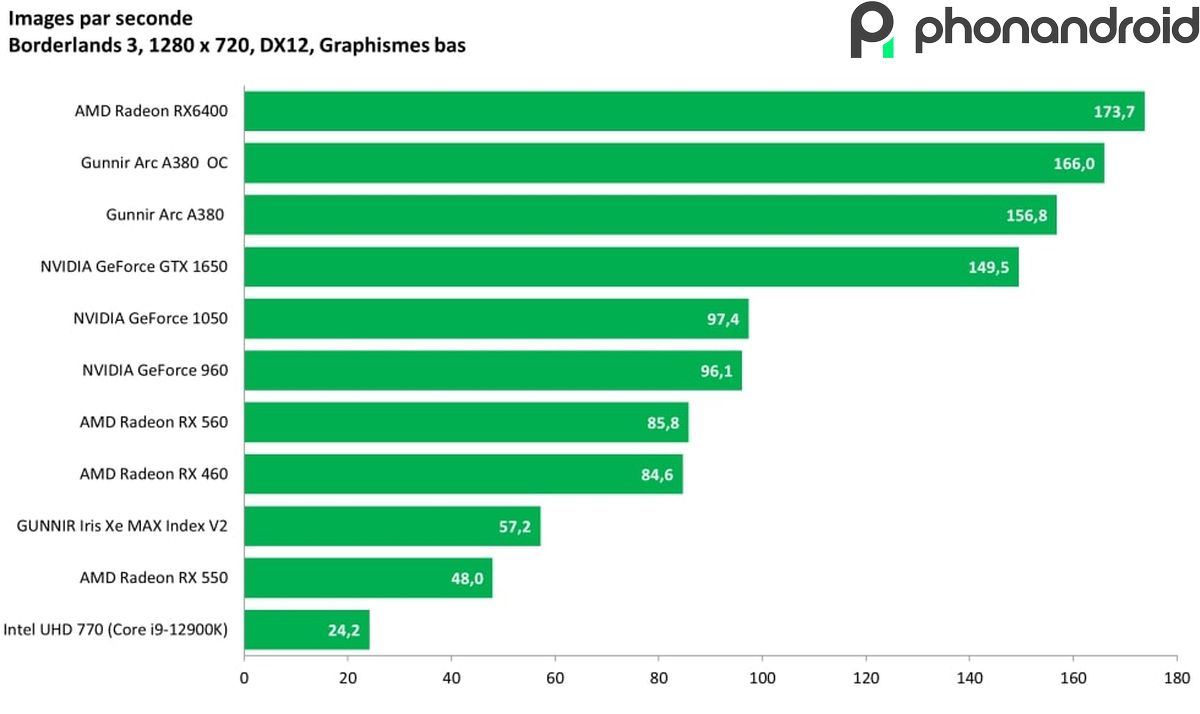 If the average difference between the Arc and the GTX is minimal (barely 3%), this is not the case with the AMD GPU which is well above the fray. Overall, the RX6400 performs 12% better than Intel’s card. 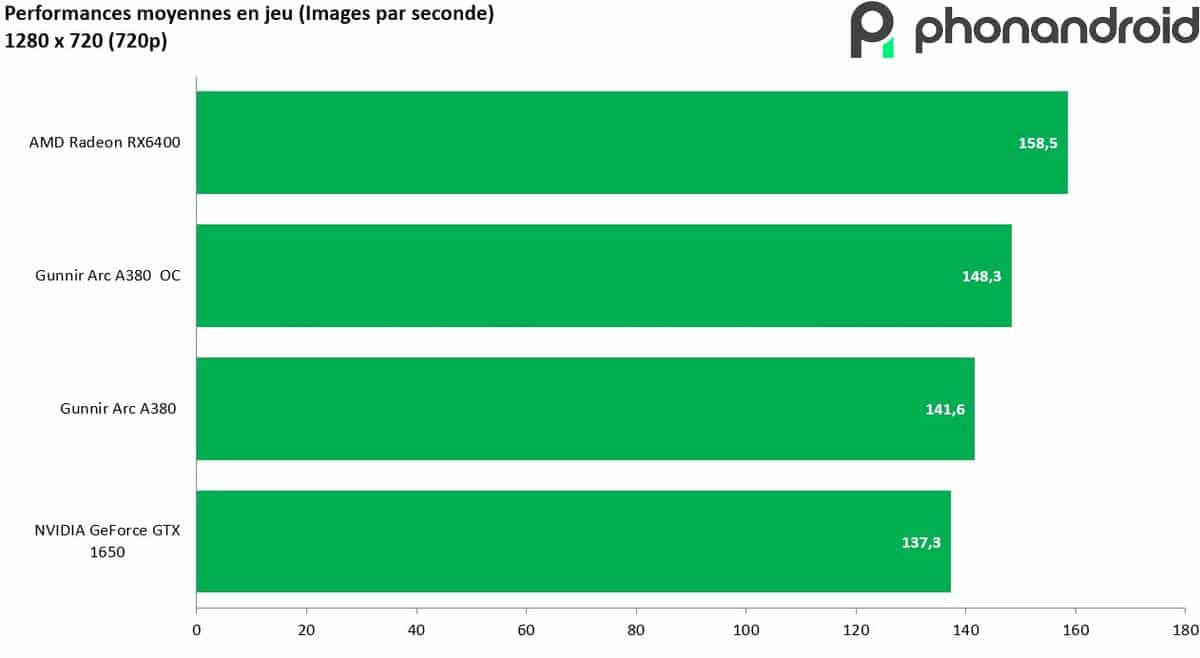 720p is fine, but 1080p gaming is the norm these days. On our tests under these conditions, the results are slightly different. On Shadow of the Tomb Raider, we always have an RX6400 far ahead. 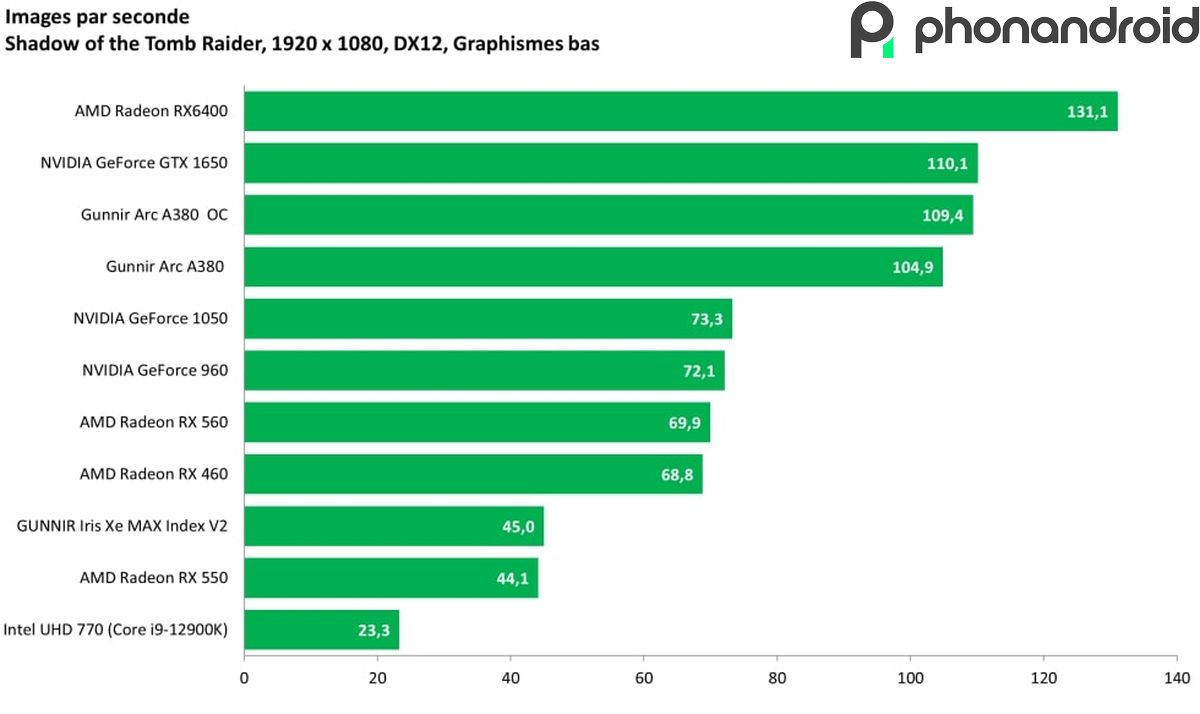 On Youngblood and Control, the difference is minimal. 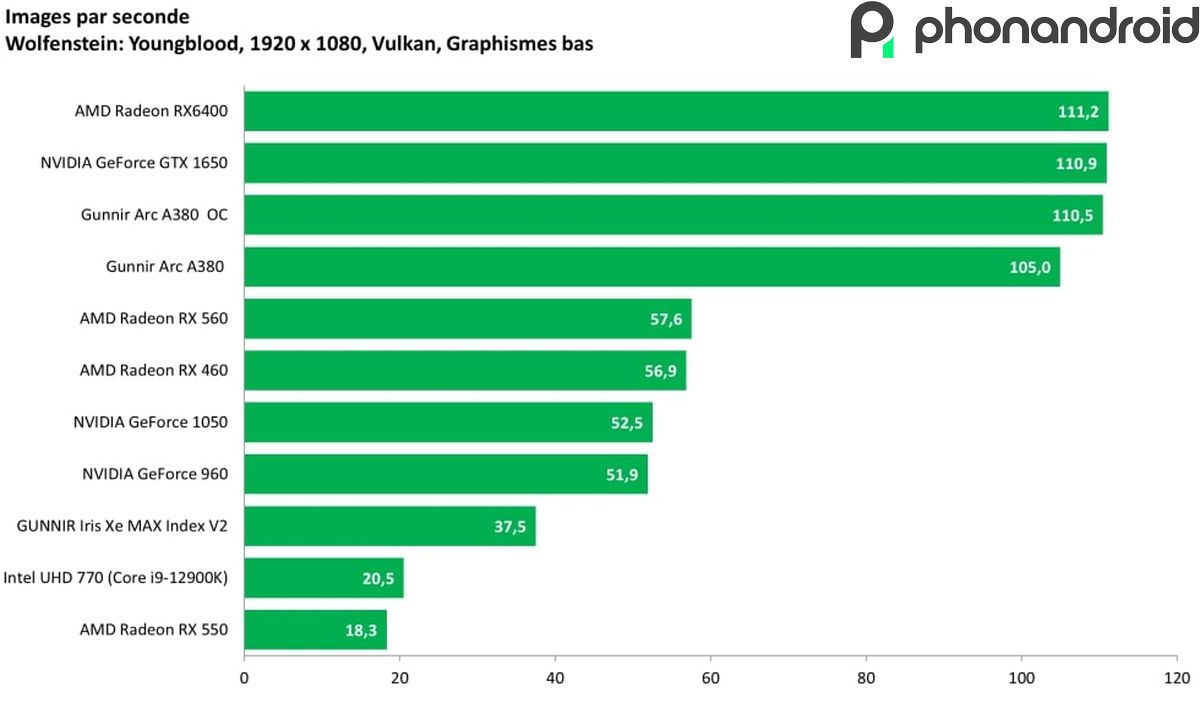 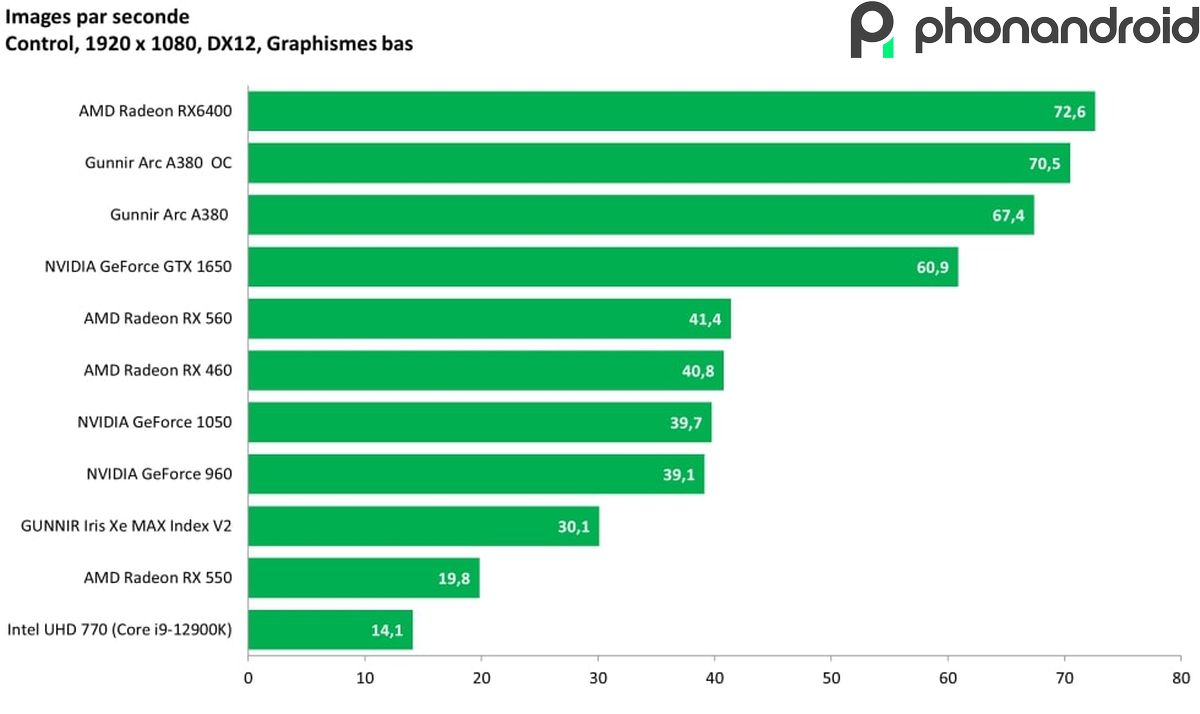 On Borderlands 3 and Horizon, the Arc takes the lead. There is a nice improvement when overclocking is activated. 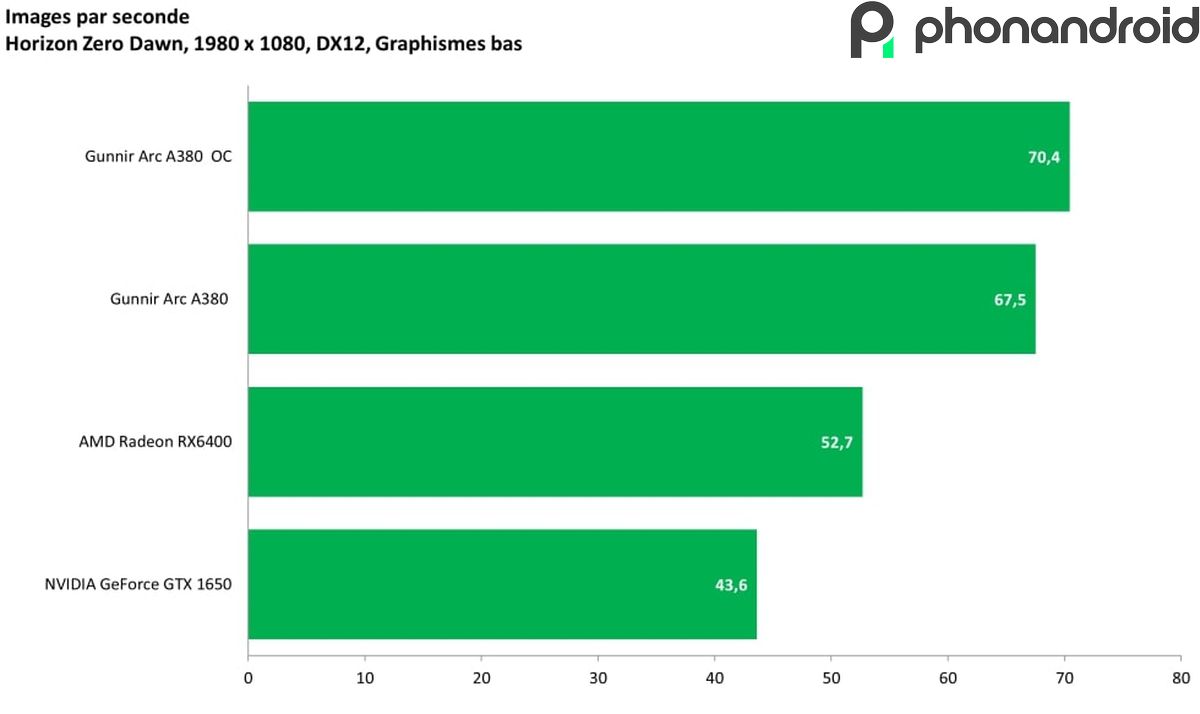 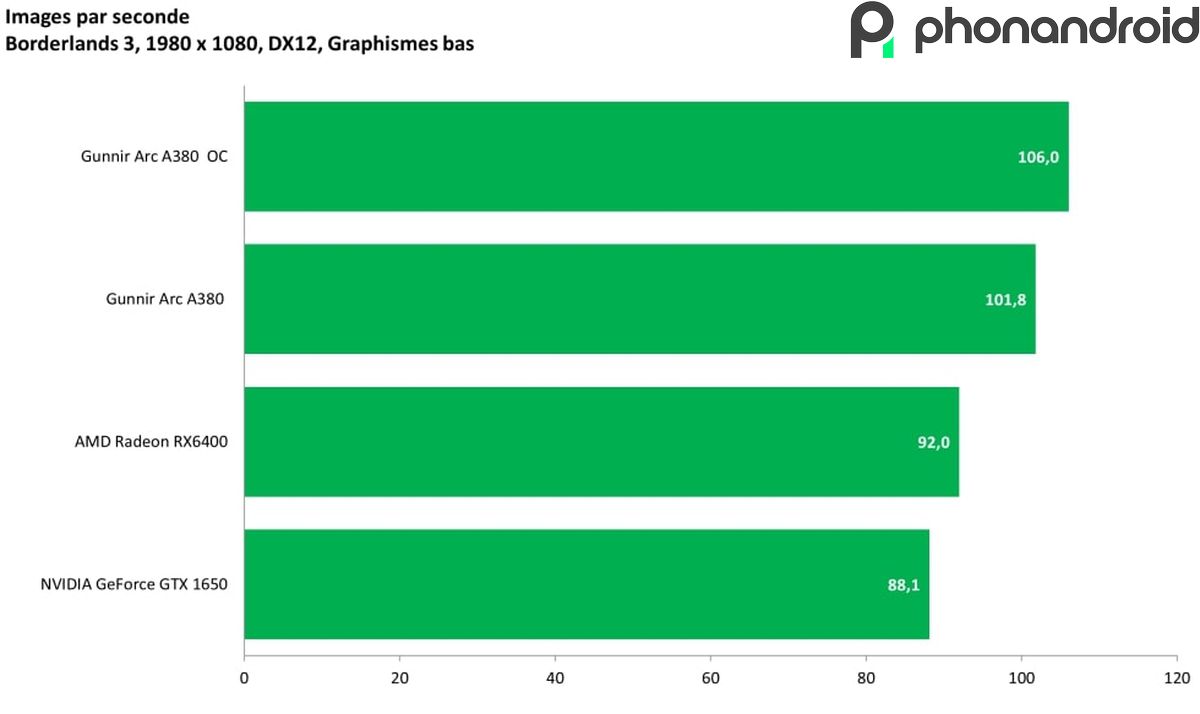 When looking at the averages, the Arc 380 shows satisfactory results. In OC, it ranks first in our panel, but remains neck and neck with the Radeon in any case. The GTX 1650 lags behind in terms of pure performance, although in practice we are in the same range (the gamer will see very little difference in use). 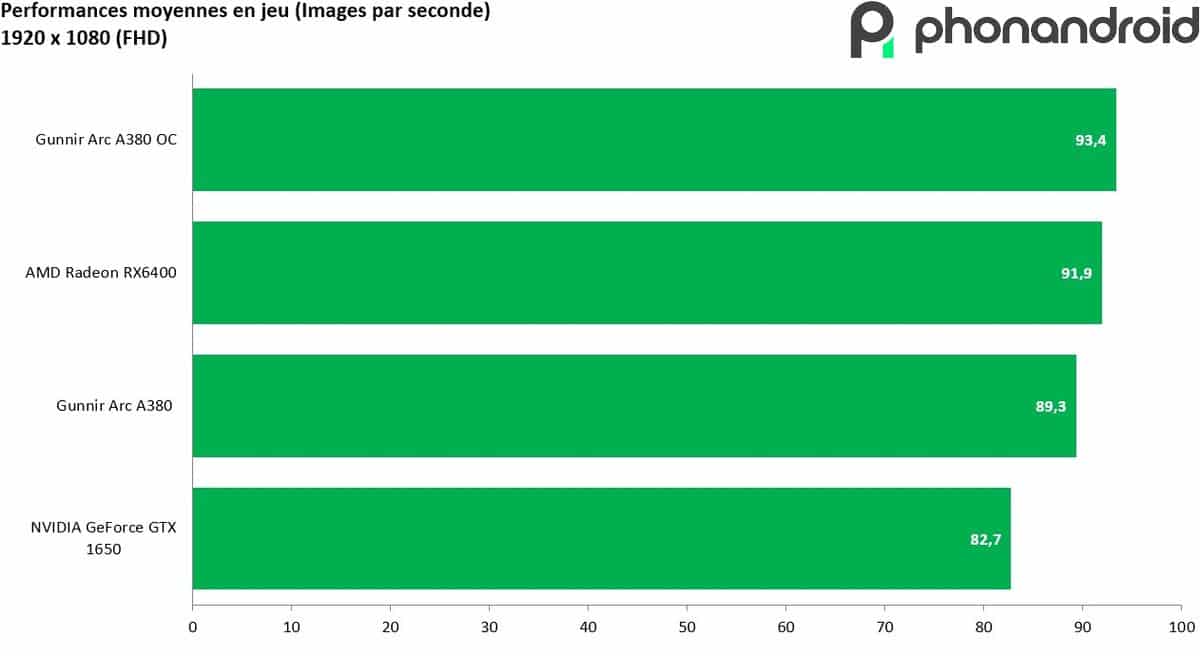 It’s still not convincing. Exceeding a graphics card released in 2019 (the GTX 1650) is the minimum we can expect. On the other hand, the Radeon, recent and less expensive, remains generally above, while consuming less energy.

The Radeon provides an ideal balance between performance and consumption, which is not the case with our Arc 380. The latter promises a TBP (average consumption) of 75 Watts. It is possible to draw power from the motherboard via a PCI-Express port or directly connect it to a power supply via a PCIe cable. Again, the results below were obtained in game, on the exact same sequences as before. 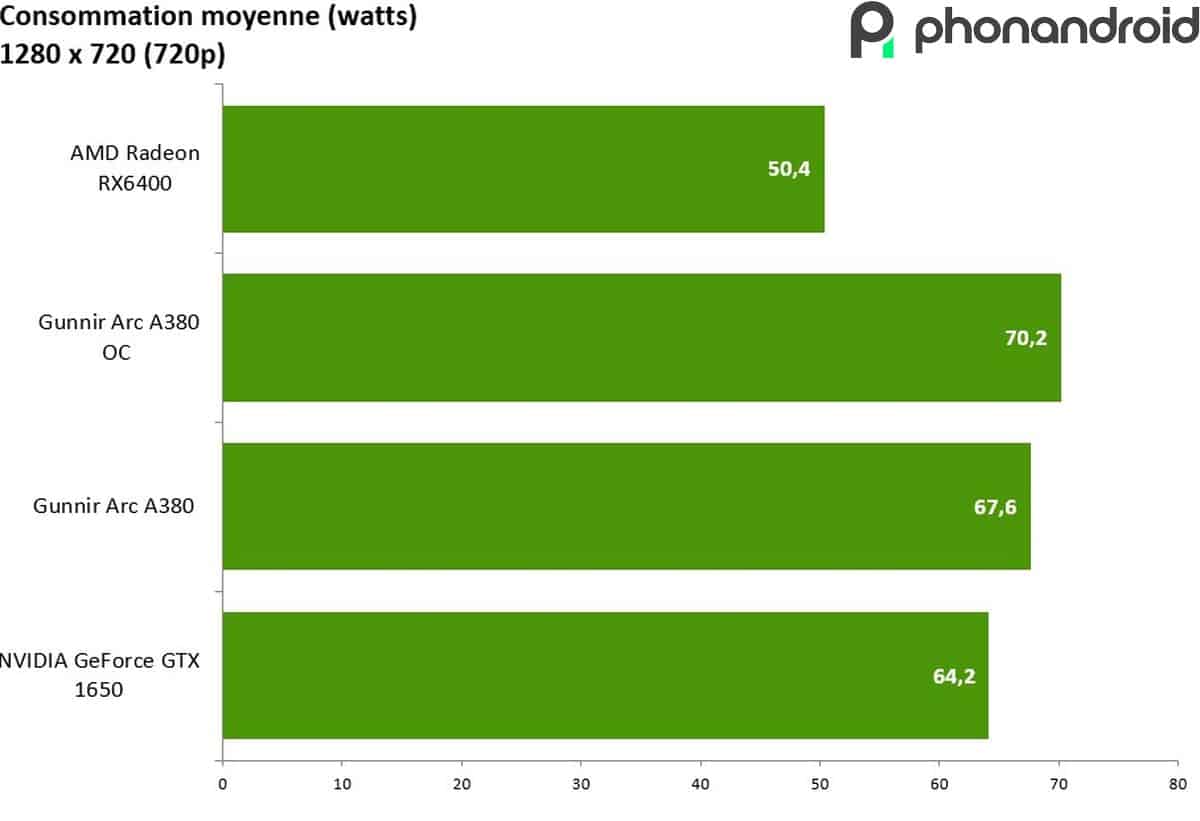 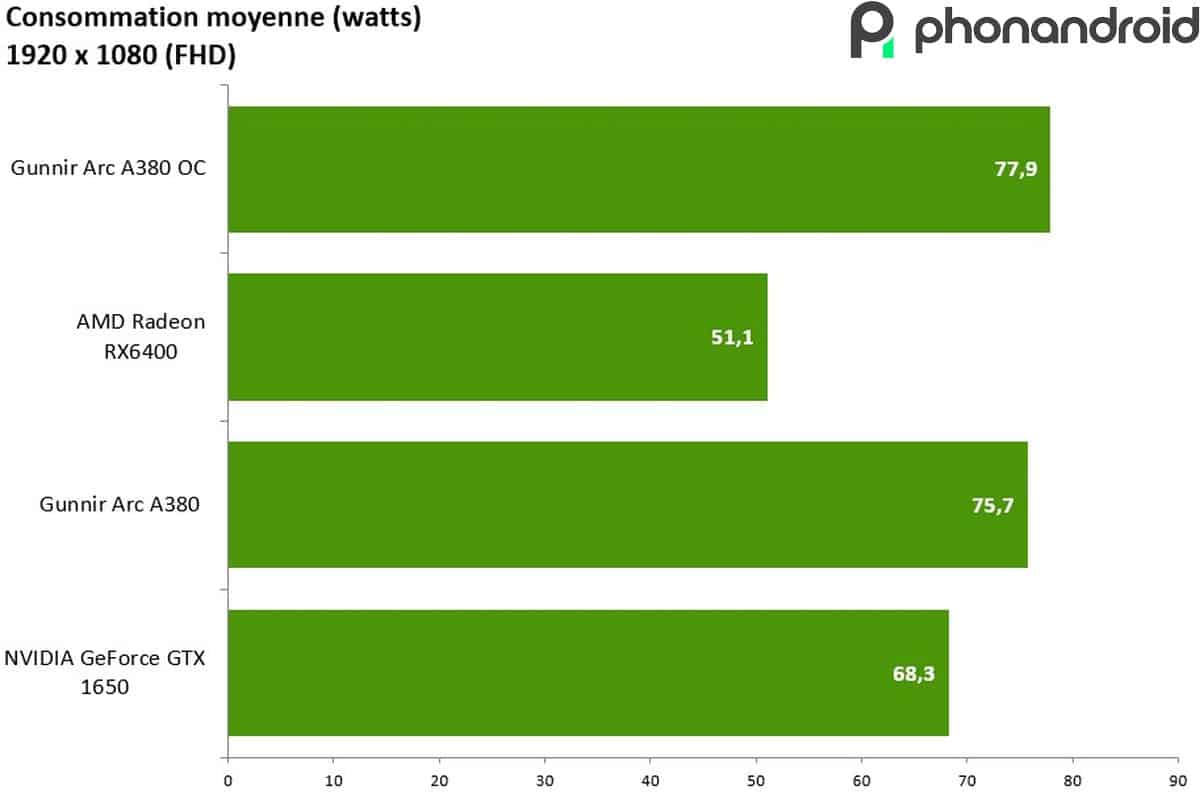 As we can see, the measurements are not in favor of Intel’s card. Admittedly, the promised consumption is respected, but it is much more energy-intensive than the Radeon, and this for lower performance! Moreover, it consumes more than the GTX 1650, which is also not an example in the matter.

Thus, we have a consumption management that is not really optimal. A huge flaw that we will have to deal with.

Let’s now enter the last part of this test by looking at the power management of this Arc 380. First interesting data: it displays optimal stability on games, at 2450/2500 MHz. A measure that testifies to Intel’s control over its power.

Regarding the heating, the result is less convincing, but not alarming either. With our thermal camera, we observed high heat at the VRM blocks during gaming sessions, rising to almost 60 degrees. This is the surface temperature. Inside, the GPU rises to 80 degrees. It’s not catastrophic, but we would have liked a much better control of the heating. The temperature inside our PC (closed) oscillates when it between 50 and 55 degrees Celsius. 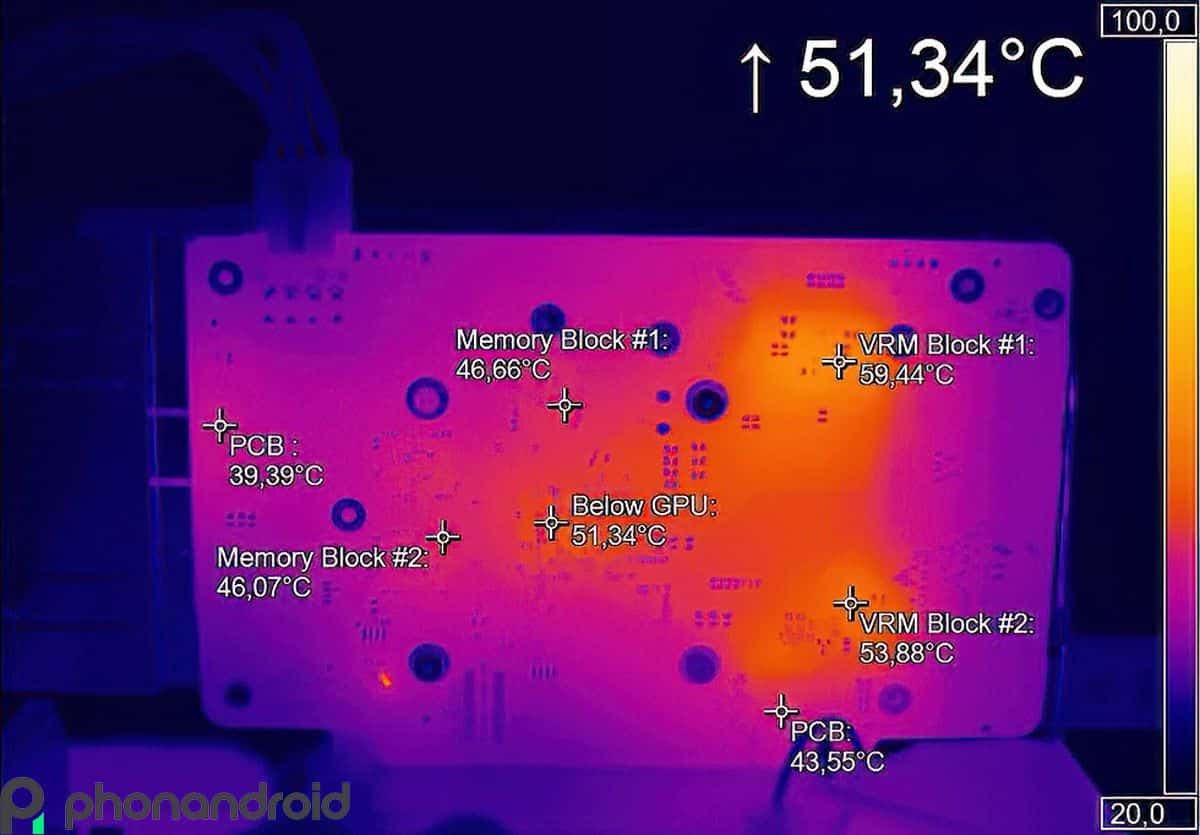 Everything could have been played out at the level of the fans, but the latter constantly adopt the same speed, not adapting in any way to the use of the GPU. Their noise was measured at 39 decibels, which is not huge. It should be noted, however, that their sharp and constant noise can be very annoying in the long run if you are playing with an open tower. GUNNIR is the culprit on the spot, since the fans are actually of poor quality. 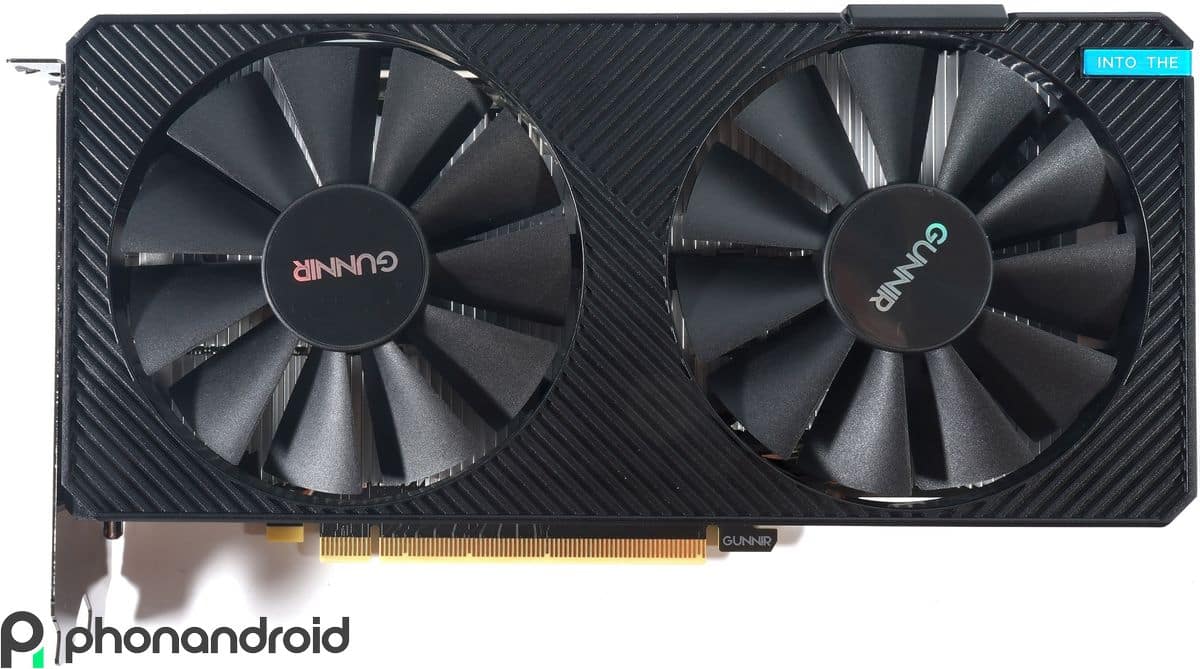 With its Arc 380, Intel is constantly on the edge when it comes to managing its heat and noise. If the GPU is not catastrophic, it is far from being a model of its kind. There was much better to do.

Upgrade your workspace at home with these accessories from IKEA

Make peace with your printer with the HP Instant Ink service: Ink at home for all budgets