Threadripper processors are AMD’s HEDT range, very high-end CPUs with very high performance, highlighting the core count they provide, but at prices and with quite remarkable “buts”, since they need quad-channel memory to begin with. to perform to their full potential, and even require special heatsink mounts due to the large IHS of these processors.

When it comes to what’s new for AMD’s Ryzen Threadripper 5000 HEDT desktop CPUs, one of the major changes will be the Zen 3 core architecture itself, which will reportedly boost IPC performance by up to 19% compared to the line of Existing Zen 2-based Threadripper CPUs. Threadripper 5000 processors, codenamed Chagall, will retain 64 cores and 128 threads at most, but offer substantially higher clock speeds, reorganized L3 cache, and will feature 7 lithography. nm slightly refined to offer better overall efficiency.

As you can see from the leaked image we have posted above, Chagall is expected to represent an xGMI upgrade going from 16 GT to 18 GT; based on the 8 + 1 MCM setup it should be exactly the same size and die design as current processors so no heatsink swap would be necessary (plus the TDP seems to be the same as well so this statement makes special sense). It seems that at the moment AMD will not integrate either DDR5 or PCIe 5.0 in this generation, unlike Intel, which in theory will. 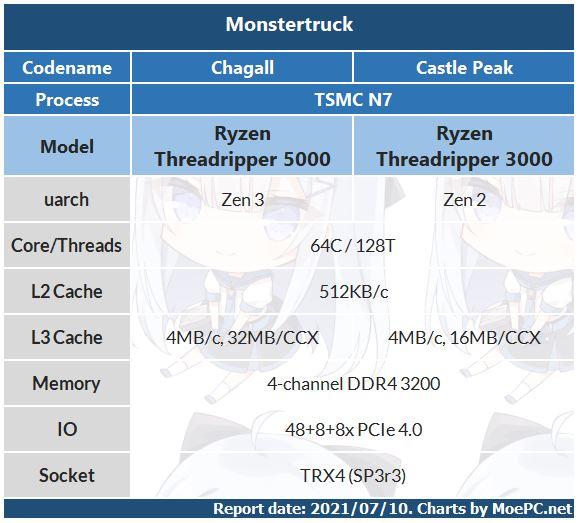 The update and reorganization of the L3 cache is a big news. It will double from 16MB for CCX to 32MB for CCX, and interestingly AMD remains committed to socket longevity so these Ryzen Threadripper 5000 Chagall will continue to use the same TRX4 (SP3r3) socket.

According to previous leaks, AMD will only announce the platform in August, but its general availability is not expected until the following month, September. The platform has already started showing up in various monitoring software changelogs like HWINFO, so it’s pretty clear that the launch is imminent.

Intel currently does not have adequate competition with its latest release, the 10th generation Core-X family that arrived in 2019. Since then, AMD has dominated the HEDT landscape and will continue to do so with this release from Chagall, at least until Intel reorients its HEDT efforts and workstations with Emerald Rapids, which are also expected to see the light of day sometime in 2021, but may not come until 2022. This will theoretically be AMD’s last update for the HEDT segment. in this socket until the company goes definitively to DDR5 and PCIe 5.0.

On this day Blogger was born, Steve Ballmer announced his retirement, and more

Problems with Microsoft Store applications? Fix it up