On many occasions it happens that the final value of a collaboration is much more valuable than the sum of its parts, to the point that you even ask yourself “How come this didn’t happen before?” And this is, in my opinion, one of those cases, which is that Corsair and NVIDIA are collaborating to integrate the key features of NVIDIA Broadcast into the software CORSAIR iCUE, Elgato Wave Link and Elgato Camera Hub, so that users of this brand’s devices and software with NVIDIA graphics adapters can get the most out of their setups.

In case you don’t know him, NVIDIA Broadcast is a software solution, compatible with all RTX 20 and RTX 30 series graphics adapters (including Mobile models) that allows you to apply a series of effects to the audio and video outputs of your PC, providing effects ranging from noise reduction of the signal captured by the microphone to effects with the background of the video. A few months ago we told you about the news of its latest version and, for those interested in using it with OBS Studio, we also published a step-by-step tutorial to configure and use it.

For its part, Corsair’s iCUE technology needs no introduction, because over the years it has established itself as one of the best LED lighting technologies on the market. And the same can be said about Elgato devices (and their software, of course), an absolute reference for streamers and content creators, key groups for the company, and whose devices have been designed very specifically to facilitate and improve their activities.

With this collaboration between Corsair and NVIDIA, users of Corsair and Elgato device software powered by GeForce RTX graphics adapters will enjoy the integration of NVIDIA Broadcast features, both in audio and video.

In the case of sound, the artificial intelligence-based features of NVIDIA will provide much clearer and crisper sound to users from almost the entire range of CORSAIR headsets, Elgato microphones and XLR microphones with Elgato Wave XLR. Thanks to machine learning, which is supported by the Tensor Core cores of the RTX GPUs, NVIDIA Broadcast learns to clearly identify the user’s voice, and the software is able to clean up the rest of the sounds. In this regard, and from my own experience, I can say that I have a laptop with a fan that is a bit “noisy” (sometimes I was asked if I was on a helipad), but when I use the NVIDIA Broadcast filter to talk to my friends , its sound is attenuated until it practically disappears.

And if we talk about video, as you can see in the tutorial I mentioned earlier, NVIDIA Broadcast identifies and modifies the background of the image in real timewith a level of speed and precision that is more than surprising and, something also very important, with a more than adjusted consumption of system resources. 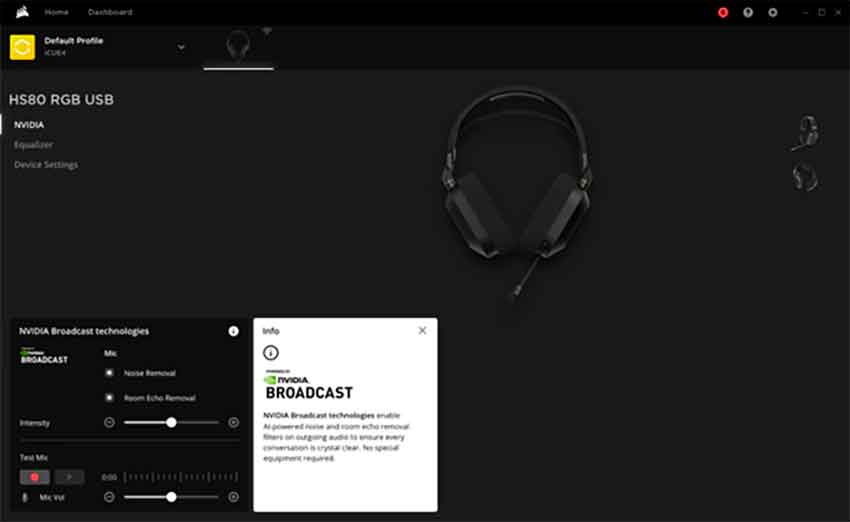 With this new integration, if the iCUE software detects a Corsair headset or ST100 headset support, and the system has a GeForce RTX GPU, it will automatically offer the possibility to install the NVIDIA Audio Effects SDK. In this way the audio cleaning function will already be available. It will also integrate with Elgato Wave Link if needed, so we can use it with most common streaming solutions.

As for the video, a new effects tab has been added to the Elgato Camera Hub (version 1.3 or later), through which we can access all the background effects included in NVIDIA Broadcast, which avoids having to configure them in the NVIDIA software and, later, select it as a source for Elgato Camera Hub. Once this adjustment is made, we can select “Elgato Virtual Camera” as a source for those applications and services in which we want to use the image with the edited background.

Netflix already has video games in its catalog, but you won’t be able to play them

Disney+: cheaper subscription, but with advertising

War in Ukraine: the country calls on Playstation and Xbox to leave Russia

Apple Glass: the presentation is imminent, it is confirmed