The mobile phone market is seeing a lot of movement lately and there are many companies struggling to find a place in an increasingly complex landscape. Realme is one of these companies that wants to make a site offering benefits above the average with very attractive prices. We have had the opportunity to test its latest launch: the Realme GT Neo 2, a mobile that due to its characteristics very recently could have been considered a high-end terminal but that has a price that places it rather in the mid-range, a territory in which there is a lot of competition, especially lately. This company shares a parent with Oppo, OnePlus and Vivo but has established its own product strategy.

Taking a first look at the technical characteristics, two sections are immediately apparent compared to the previous generation: the processor and the battery. In this case, the GT Neo 2 equips a Snapdragon 870 chipset with an A77 core of 3.2 GHz and eight cores as well as a 5,000 mAh battery that also allows ultra-fast recharge of 65W that, according to the manufacturer, is capable of carrying out a full charge in 36 minutes.

Another very significant evolution is that of the screen. It is a 6.62-inch AMOLED-type display manufactured by Samsung that has Gorilla Glass 5 protection and allows screen refresh rates of up to 120 Hz (self-regulating to control energy consumption) and a check rate of touch interaction of up to 600 Hz. A number that together with the processor make the GT Neo 2 a mobile specially prepared for games.

In the camera section, on the other hand, there are no significant advances, although the adoption of a more powerful processor should make a difference in the post-processing of the images and in the speed of execution. This is the same 64 megapixel triple camera sensor that the previous generation had. In addition to the main lens, the GT Neo 2 equips a 119-degree wide-angle lens and a 4-centimeter macro lens.

After taking the first look at the specification sheet, we are about to unpack the terminal. The first impression is very good. Our model is what Realme has called Neo Black and shows an impeccable finish that is pleasant to the touch thanks to the design made with 7 “nanolayers” which, according to the manufacturer, make it particularly resistant to scratches on the back. Although it is a plastic material, the touch is more similar to that of a glass but with a good grip.

We liked to see that it is not too prone to fingerprints so it is a fairly “clean” case in this sense. The 8.6 millimeters thick does not make it the thinnest, especially if we add the much-needed protective casing (incorporated in our case) but they make it manageable enough. The same thing happens with the weight, the 199 grams does not allow it to win any championship but if we do not lose sight of the price range it is a mobile with a more than reasonable weight.

Cameras «on the island»

In the back part we find in the upper left part the “island” of the cameras that protrudes from the back. The two main lenses still stick out a bit more. Another very noteworthy detail is that the material chosen for the sides has a very remarkable grip, which quite effectively prevents the mobile from slipping out of our hands. Again, the case is an accessory that limits these possible accidents even more and is not too cumbersome when holding the phone.

On the left side of the phone we find the usual controls for volume and on and off. At the bottom is the speaker grille in the form of three elongated holes, the USB-C connector and the slot for inserting the SIM (it is not possible to use Micro-SD to expand the memory). In general we have observed a good care of the finishes, the back with a curved design, the quality of the buttons … everything gives a feeling of quality.

Despite the good choice of materials and the quality of the construction of the terminal, the GT Neo 2 does not have the IP certification of resistance to dust and humidity. In another order of things and in this case in line with the terminals that are being launched lately, it does not have a Jack-type headphone connection either. The fingerprint sensor is located under the screen, very close to the bottom edge of the phone.

The first thing we put to the test on this new Realme model is the screen. The AMOLED display is made of Samsung’s E4 luminescent material, which according to manufacturer information reduces power consumption by 15% and provides a contrast ratio of five million to one. Also according to the manufacturer this screen is now capable of reproducing HDR10 + visual content reaching a maximum brightness of 1,300 nits. 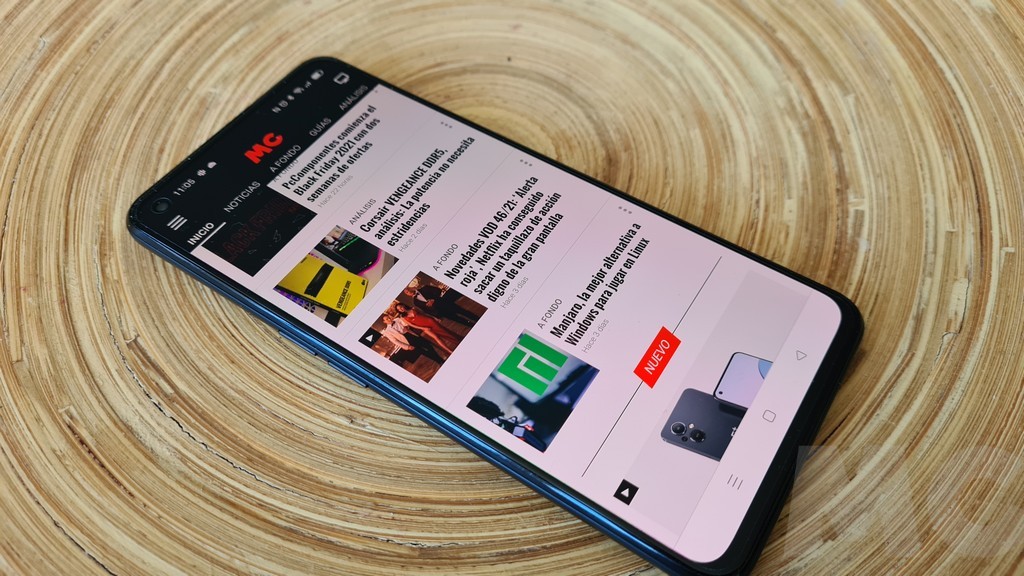 In our tests with both static images and video, the response of the screen has been excellent, good contrast and brightness and good response in very bright environments. Although the resolution is still 1080 x 2400 dots, the truth is that the image quality is very good. The refresh rate is automatically adjusted by the terminal itself, which maintains those 120 Hz, especially when scrolling with content on the screen, so the feeling of smoothness in these situations is total.

Keep in mind that it is not possible to force that refresh rate and that, for example, games are limited to 60 Hz. An interesting detail that is not usually appreciated is the usability of the terminal with the fingers. In this GT Neo 2 Realme has incorporated, on the one hand, an improved X-Axis linear motor haptic system that improves the response of the screen to the touch of the fingers, returning the appropriate vibration when we activate it. On the other hand, and as we have mentioned, the touch sensor works at 600 MHz so the phone responds very sensitively and promptly when we touch the screen.

The set of the two systems provides a sensation of having more tactile control over the screen, that the response is more immediate than in other similar terminals. An interesting detail that has been very positive for us. Another important point is that of the battery, the 5,000 mAh together with more economical components such as the new AMOLED screen or the Snapdragon 870 chipset make the autonomy very large. 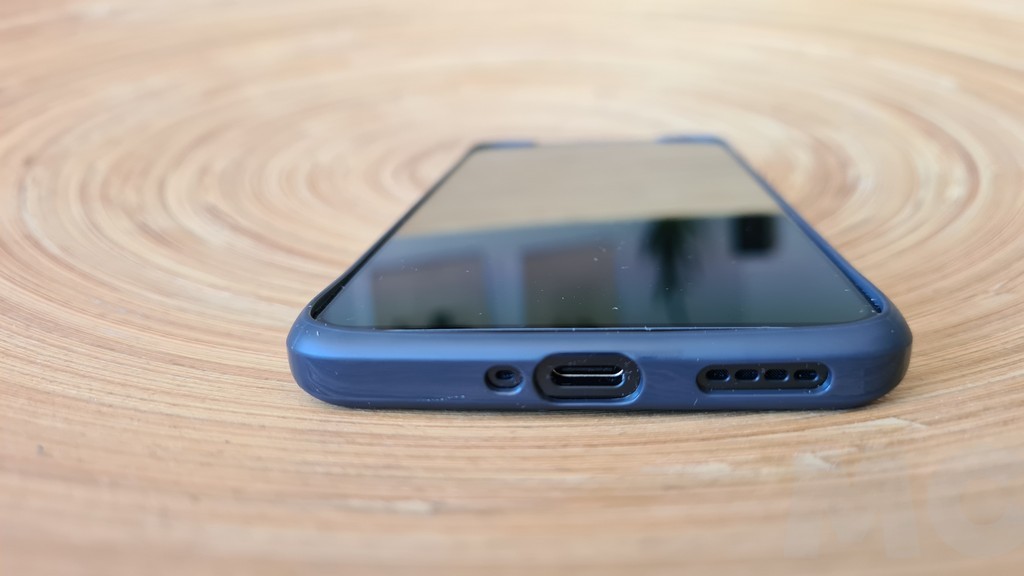 With the standard configuration and normal use, the terminal can easily last two days that can be reduced to one if we use it for games and video intensively. In any case, an impressive brand and undoubtedly one of the most outstanding points of the terminal. The fast charging system is another interesting factor for those who are concerned about running out of autonomy. With a 65 W charger it is possible to have the phone fully charged in just half an hour, fulfilling the manufacturer’s promises.

The speed of the SnapDragon chipset is noticeable, especially in applications where the terminal has to move images such as games or video. Although on paper it is a step below the most powerful mobiles, in practice the difference is not too noticeable. It must be taken into account that the mobile has a GT mode (which reaches its version 2.0) that allows to maximize the performance of the screen and the system in general as well as to maximize the touch sensitivity of the screen.

It is a mode especially suitable for games and other applications that require higher power. Keep in mind that activating it drastically reduces battery life, although having 5,000 mAh this inconvenience is not as important as it would be in other terminals with less capacity. Another interesting point is the cooling system developed by Realme for this model. 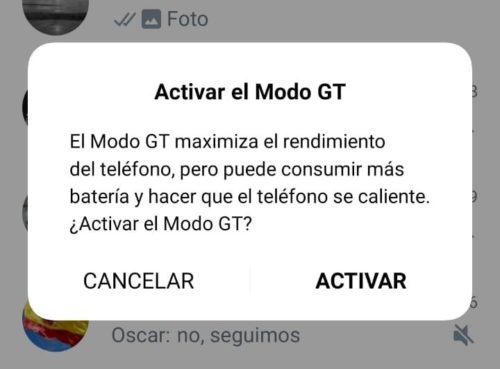 It is a system that uses a stainless steel heat dissipation plate with an eight-level structure with a special thermal paste made with diamond to maximize the cooling of the device. The system theoretically allows a heat dissipation efficiency 20% higher than with other systems and a maximum temperature reduction of 18 degrees. It is difficult to empirically verify these benefits.

What we can say is that in our tests with intensive applications in regards to the work of the processor, the feeling is that the terminal hardly heats up. With respect to other models, especially those that are somewhat smaller in size, the difference is important. This efficient dissipation is especially relevant when we are talking about a terminal capable of charging at a power of 65W.

The camera software is intuitive and has the basic functions that you would expect to find in these types of applications. It has a mode called “Street Photography Mode” or Street through which some special functions are available such as instant zoom, film filter simulation or the ability to record the image in RAW mode. The camera defaults to shooting at 16 megapixels resolution but can be forced to shoot at a maximum of 64.

By choosing the higher resolution mode, we will lose color range, so although the images will have more detail, we will lose richness in tones. In the photos taken for the tests, the quality is quite high for its price level, although we have detected some excess saturation in the images, probably the result of post-processing. The night mode has been especially effective for us, especially if we do not use the zoom.

The realme GT Neo 2 is an interesting assault on the mid-range of mobile terminals with many features typical of a high-end. The high-quality AMOLED screen with a 120Hz refresh rate, a 5,000 mAH battery and some interesting details such as the cooling technology or the materials used for the case. It is a mobile that is not particularly light or thin, but due to its design it is handy and pleasant to use. An advert. When assigning the scores we have taken into account the price range in which the terminal competes. 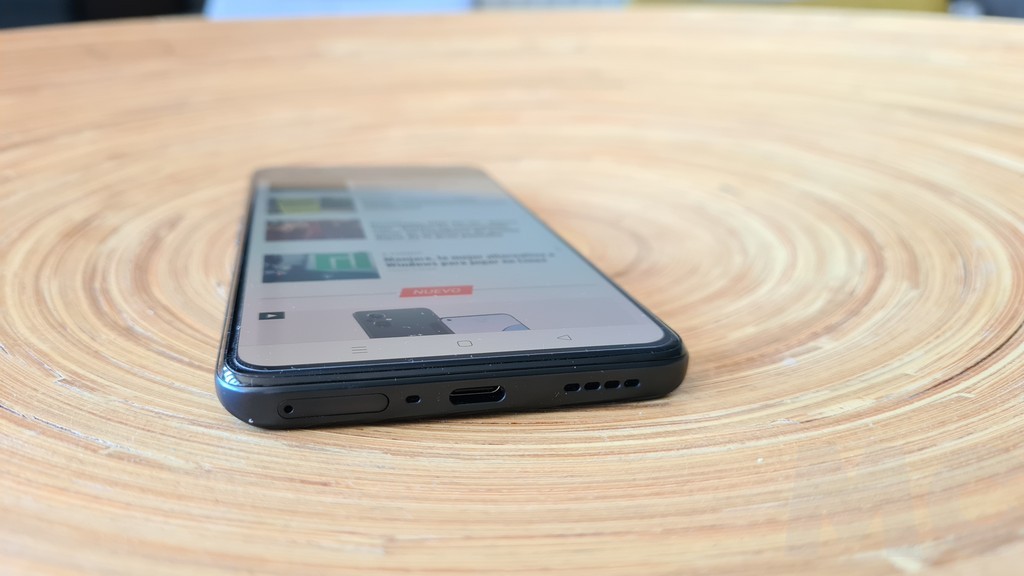 Attack on Titan dates its final season Part 3 for 2023

Samsung: rollable smartphones won’t be on the agenda for some time

Dying Light 2 PC Requirements: You are going to need a lot of power to activate ray tracing