The demand for a portable Nintendo Switch-type console that promises to enable the AAA games on the fly it is apparently towering. Despite the fact that some portable devices exploring the same concept have been around for quite some time (such as AYA Neo, which even includes two additional Zen 2 cores or the Intel-based One XPlayer), this machine was built by Valve and that is integrated with the steam library it is a guarantee that many players do not want to miss.

As is the case with any recent hardware release that attracts enough general public attention (such as next-gen GPUs or consoles), an unbalanced supply-demand ratio is a playing field for types without. scruples seeking to make a profit at the expense of other people. We are talking of course about the speculators, and we have already seen their way of proceeding on several occasions: when there is a shortage of a product and they manage to get hold of one, then they resell it at really abusive, extremely high prices, in order to profit.

Regarding the Steam Deck portable console, it is already happening: despite the fact that the console has not yet hit the market and only one reservation per person is allowed (in fact by advancing money), they have already started to appear on sites like eBay to really outrageous prices: sold as “confirmed by pre-order”, come to prices of 4,324 euros, about eight times its price. 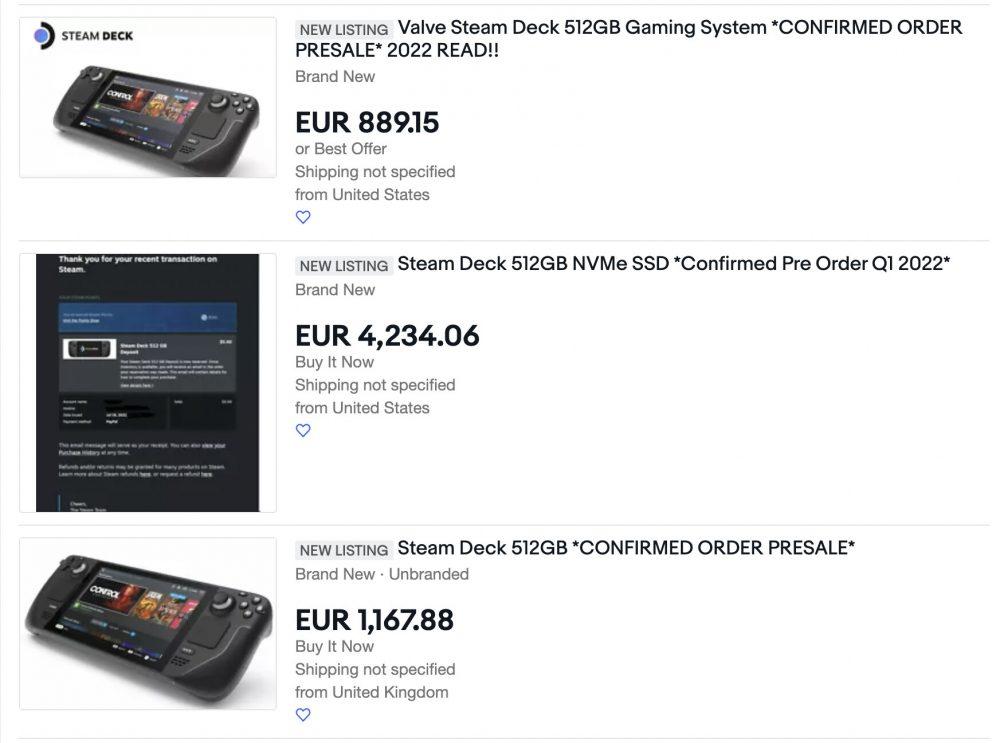 This is an extreme case, since the average price in the second-hand market is around 900-1,000 euros approximately for the variant with the 512 GB NVMe SSD, the most expensive of all. In any case, tentative or not, this only shows that the new normal is that the products launched are actively evaluated for speculation practices, now more than ever and which, if you allow us, is somewhat regrettable.

From the beginning Valve has already established measures to avoid speculation with the Steam Deck, but also denoting from the beginning that there is very likely a shortage; On the one hand, only one order per person is allowed, on the other, a small payment must be made as a signal for the reservation, and finally only Steam accounts that have a certain age will be able to access this reservation.

This can prevent speculators from starting to create new Steam accounts to make multiple reservations and then seek to profit by selling the most expensive device, but also many of them will already have one or more accounts with which they can make the reservation, and it is precisely what which they apparently have done. We will see if in the end Valve is able to meet deadlines (first quarter of next year) and if there are enough units not only to cover the reserves, but also to be able to sell individual units to people who have not wanted or been able to do so.

Currently, you can still reserve the Steam Deck, by the way, so if you want to get one, do not hesitate and make the reservation (the deposit as a signal is just 4 euros, which if you regret it in the end will be added to your Steam balance, so in any case you will not lose them).

Installing a hard drive is easy, but can you do it these ways?