Google is giving an overview of its future section dedicated to transparency, which will appear next to all the applications on its Play Store. This new insert, which should specify what apps do with internet user data, should be generalized in 2022.

It is not yet the final version, but the preview presented by Google on July 28 gives a small idea of ​​its directions for the future section dedicated to privacy and confidentiality on Google Play. Indeed, several captures and a video were shared by the Mountain View firm to more concretely present this project, which was announced at the beginning of May.

A section for the transparency of Android applications

What is it about ? This future section consists of displaying, in a dedicated insert and visible to all, what Android applications request as data from the Internet user and what they plan to do with it. In other words, it is about making the programs much more transparent than they are today, by forcing them to new rules. However, applications still have several months of respite.

Indeed, these transparency constraints actually follow a calendar punctuated by a series of steps to be taken – dates which are also subject to modification. Certain stages concern developers more, with deadlines to be met, in particular in 2022. For the public, it is important to remember that the insert will begin to appear during the first quarter of 2022.

In accordance with the first indications sketched in May by Google, the visuals show indications such as: does the application encrypt the data or not? Can these be deleted? Does the app follow the guidelines for general public use? Has it been subject to an independent security audit? In addition, the number and type of data collected is specified. 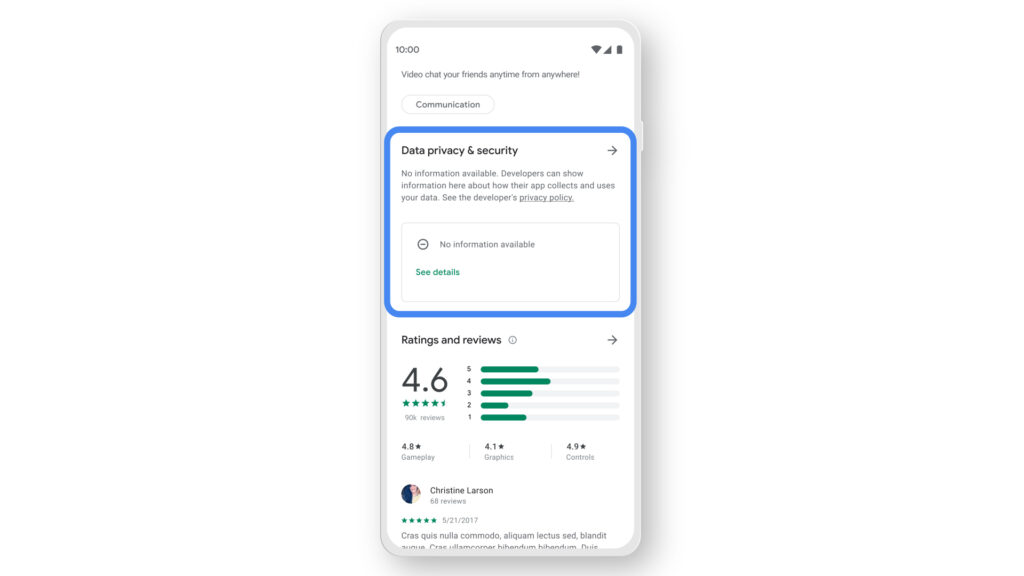 It is possible to interact with the insert to display additional information and have details of a particular use. In the event that the application does not provide an indication, this void will obviously be signaled. There will likely be a period of tolerance during which Google won’t be too pushy towards developers, but in the longer term, action could be taken.

” We know that some developers will need more time to evaluate their applications and coordinate with multiple teams. You will therefore have until April 2022 to have this section of your application approved. If this section is not approved, your new app submission or update may be rejected. », Writes the American company.

The new section that Google is preparing in its application store is obviously very inspired by the initiatives taken by its great rival in the mobile: Apple. The consumer electronics giant has rolled out a new device, the App Tracking Transparency. Google, not wanting to be outdone, is preparing its own solution, adapted to the Android ecosystem.

Has the Halo Infinite release date been leaked?

How to install Google Play Store on an Amazon Fire tablet