Google Maps It has become the most used map service in the world. This circumstance comes in part due to the fact that Android is by far the most popular mobile operating system, which makes it much easier to use, especially as a GPS device to navigate within a city or on long trips through the official application, which It usually comes pre-installed.

With Android as a battering ram to consolidate its position, Google Maps has put or at least has put TomTom, the Dutch company in charge of manufacturing those GPS devices that a few years ago were so common to find in car glove compartments, in serious trouble . The reasons for TomTom’s crisis are not difficult to guess, since, in addition to coming pre-installed on mobile phones, Google Maps is a “free” service, high quality and constantly updated.

It is already known, when Google is in the middle, it is always better to be alert about the privacy offered, but it is undeniable that its services are, in general, really very good, starting with a search engine that more than two decades later still does not have a rival that overshadows it in qualitative terms, despite the improvement experienced by alternative search engines that are increasingly used.

As questionable as it can be to offer comfort in exchange for not getting all the privacy one should have, this time we are going to focus on the virtues of Google Mapswhich objectively has them and they are of great help to many users around the world, including this server, who lives in an area that is somewhat isolated and far from the big cities.

In order to show at least some of the most important capabilities that it has, we are going to mention nine useful things that one can do with Google Maps.

Navigation settings are available by clicking on the user’s avatar or profile icon and then going to Settings > Navigation settings. One of the main things it allows you to do is set the default route options, through which it is possible to indicate if you want to avoid motorways, tolls and/or ferries.

In addition to the possibility of avoiding certain routes, the user can set the color scheme, the unit with which distances are measured (kilometers or miles), show speed limits and the speedometer, play the voice of the application by Bluetooth and other settings related to sound and notifications.

It is also possible to set the “Route Options” after defining a trip or a route. It’s important to note that any changes made here are saved in the app’s settings, so it’s a good idea to review them before you go.

Incognito mode is reminiscent of the feature of the same name present in web browsers, and obviously, in Google Maps it does the same thing, making searches and location data are not stored on the device, although the company may end up receiving user activity data.

You know, incognito mode is not a VPN or anything like that, but it still has its uses. Its activation through the Android application is done by first clicking on the user’s profile icon and then on “Activate incognito mode”.

Location history saves the places the user goes to offer things like personalized mapshowever, can also be understood as a mechanism implemented by Google to be able to track, so its deactivation can come in handy to have a little more privacy.

But after performing the steps, if Google Maps has already been used, almost certainly a history has been saved that it would be better to delete. To do this, go to “View and delete activity” within “Your data on Maps”.

Sometimes, on a trip, one passes through places where the quality of the Internet connection is not very good, so the signal can be lost. In those cases, you can use the download and local acquisition of the map that covers the routewhich the Google Maps app allows you to do (at least on Android).

Once again, after clicking on the user profile icon, the path to follow in the application is “Your data in Maps” > Select your own map > draw a rectangle with the area to cover > click on the “Download” button. After following these steps, your custom map should appear in the “Offline Maps” section.

The user can update the downloaded maps by clicking on one to access its preview, where the update buttons appear. Delete and Update.

Too long a trip? With the Google Maps application it is possible to establish stops and order them at will. Of course, you have to be careful with the order, because possibly one ends up defining the destination point as a stop and at the end, while the journey is being made, there comes a time when the application indicates or makes the driver make a change of meaning

Setting the stops is very simple, and to do this you just have to first click on the three points that appear in the upper right corner of the route and then on “Add stop”.

You can then modify, add and remove stops at will. Once the stops have been defined and ordered (which is done by dragging), click on “DONE”.

Set a departure or arrival time

Would you like to have a somewhat more enjoyable experience with Google Maps? If you click on the icon that indicates the location of the vehicle when starting a trip, it can be changed to a car, a van or a van. Not that it is a very important detail, but for some it is easier to follow the direction of a vehicle than where the arrowhead is pointing. 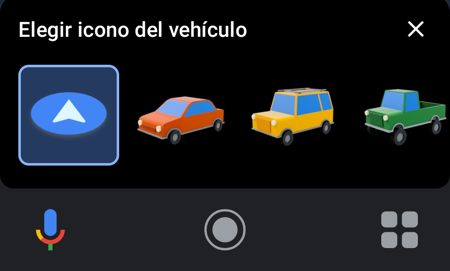 Choose the transports you want to use and under what conditions

If you click on “All means” after selecting a route by transport, the user will be able to choose the means you want to have available, which include bus, train, subway, tram or light rail, car, concerted transport service and bicycle.

Yes, Google Maps allows you to share the user’s location with their contacts in real time. Beyond the questions that it can generate, the reality is that can be very useful as a safety feature in case you find yourself in a place where you don’t feel safe.

It is possible to set the amount of time real-time location sharing will be maintained, but it can also be enabled indefinitely until the user chooses to disable it. Our recommendation is to set a limited timeeven if it is long, just in case one gets lost and does not disable it after making the planned journey.

The activation of real-time location sharing is done by clicking on the user icon > “Share location” > “Share location” button. Then you have to allow contacts to access Google Maps and select the person who can see the location in real time, either directly or through an application.

As we can see, and despite belonging to a highly questionable corporation in terms of privacy, Google Maps is a very competent service full of possibilities for those who venture into unknown or little-visited areas, either for adventure or commitment.

In addition, its interface is generally simple and intuitive and thanks to the Internet it can provide real-time data to warn of traffic jams and other events, which further increases its usefulness for users.

The curious relationship between pension plans and the technology sector

Watch out for these fake HDMI 2.1 screens, here’s how to spot them

This electric car mines cryptocurrency when it’s not running